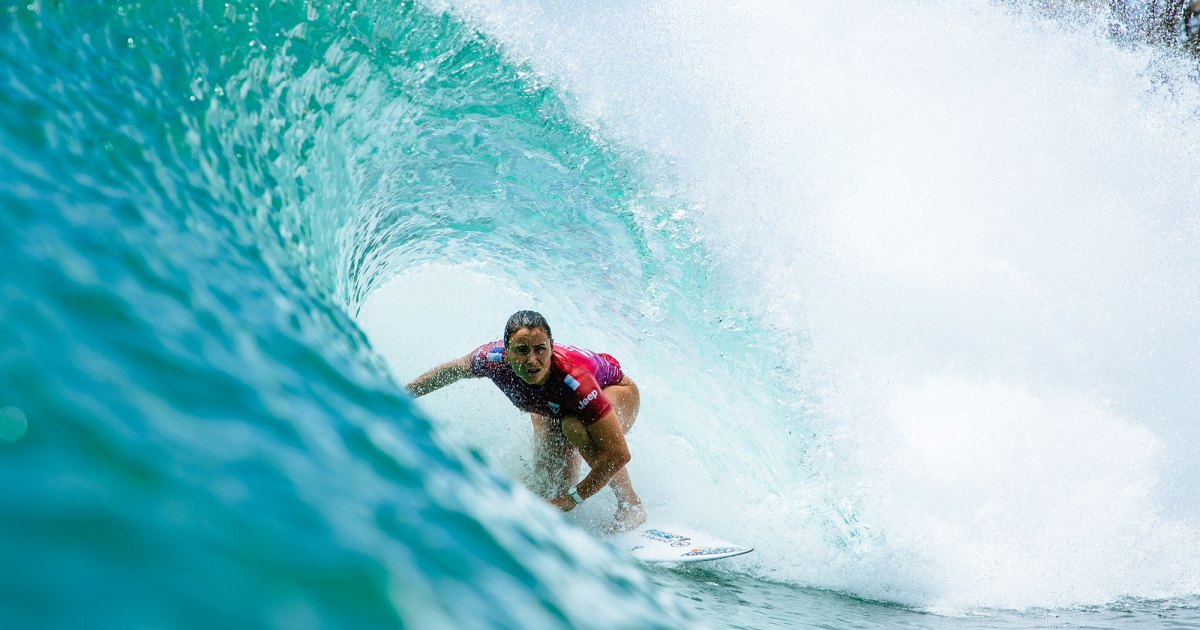 It was a hot one this weekend in California–clocking in at roughly 238 degrees in Lemoore, CA, where the world’s top surfers gathered to duke it out in a giant wave-producing tub. Despite the heat, the men’s and women’s CT were able to make the Jeep Surf Ranch Pro a spectacle to watch. Over the course of a weekend, Johanne Defay and Filipe Toledo were the two to top the podium.

Hit play above if you want to watch a highlight reel of the Jeep Surf Ranch Pro and continue reading for the WSL’s recap of the event’s final day:

Johanne Defay (FRA) and Filipe Toledo (BRA) have won the Jeep Surf Ranch Pro presented by Adobe today, the sixth stop on the World Surf League (WSL) Championship Tour (CT) and the final event ahead of surfing’s Olympic debut in Tokyo next month.

Defay defeated the reigning four-time WSL Champion Carissa Moore (HAW) by less than half a point in a hard-fought Final. The pair of Olympic qualifiers traded eight-point rides but it was Defay’s excellent 8.70 that sealed the win. The victory sees Defay move up from fifth to second place in the world and one step closer to securing her spot in the WSL Final 5. Defay’s result today is the fourth CT win of her career, her best result of the season and her second Final at the Ranch.

“I’m really impressed with the level of women surfing here at Surf Ranch,” said Defay. “Carissa, Sally, and Tati all did a great job. It’s the first time I do two finals in a row, and I’m very happy with my results.”

“Johanne was so ready to win,’ said Moore. “She is truly the queen of the pool, always knowing what to do. She has very good timing, and it was really good to see her winning today.”

Runner-up Moore remains World No. 1 and has officially clinched her spot in the WSL Final 5 where she will compete for the World Title at the Rip Curl WSL Finals in September.

“It feels great,” said Moore. “It was a big goal for me at the start of the year to make it to the top 5, to compete in the Rip Curl WSL Finals, so I’m really excited about it. It feels great to know I qualified, but there is still a lot of work to be done if I want to be the world champion.”

Toledo, the form surfer of the event, stormed to victory with a dominant performance in Lemoore. Toledo faced compatriot Gabriel Medina (BRA) in the all-Brazilian Final and a rematch of the past two event Finals. This time though, Toledo’s near perfect 9.67 followed by an excellent 8.27 were too much for the two-time WSL Champion. The win, Toledo’s second of the year, sees him move up to third place on the WSL rankings behind reigning WSL Champion Italo Ferreira (BRA), who finished the event in equal 9th, and runner-up Medina.

“This is my third CT final at the Surf Ranch, and the last two times Gabriel beat me,” said Toledo. “It feels really good to take the win this time. Gabriel has been putting on a show the entire year, and is already in the WSL Final 5 at Trestles so winning against him means a lot to me.”

Medina, who has already clinched his spot in the WSL Final 5, was undefeated at the Surf Ranch until today, having won the event in 2018 and 2019. Medina’s runner-up finish marks his fifth final out of six events so far this season.

“Surf Ranch contests are always fun because you have great waves,” said Medina. “Here you have the pressure that makes everything more interesting. Felipe and I always have good battles here. He is my favorite surfer to watch.”

Four Olympic qualifiers went head-to-head in the women’s Semifinal with Moore and Defay advancing to the Final each with an excellent 8.50. Sally Fitzgibbons (AUS) and Tatiana Weston-Webb (BRA) finish the event in equal third place. Fitzgibbons, who started the event as world no. 2, after a win in Rottnest, moves down one place to third. Weston-Webb goes down from third to fourth, also with one win so far this season.

The men’s Semifinals saw eight surfers compete for a place in the Final. Kanoa Igarashi (JPN) missed out on a Final berth by less than one point and went home in equal 5th place, which moves him up three places to sixth on the WSL leaderboard. Igarashi will now reset and focus on his Olympic campaign.

Yago Dora (BRA) put down the highest single-wave score of the event, a near-perfect 9.73 in the Semifinals, but could not find the score on the right to back it up and finished the event in equal 5th place. Dora came into stop no. 6 ranked at 10th place in the world and today’s result is his best of the season, moving him up two places to eighth in the world.