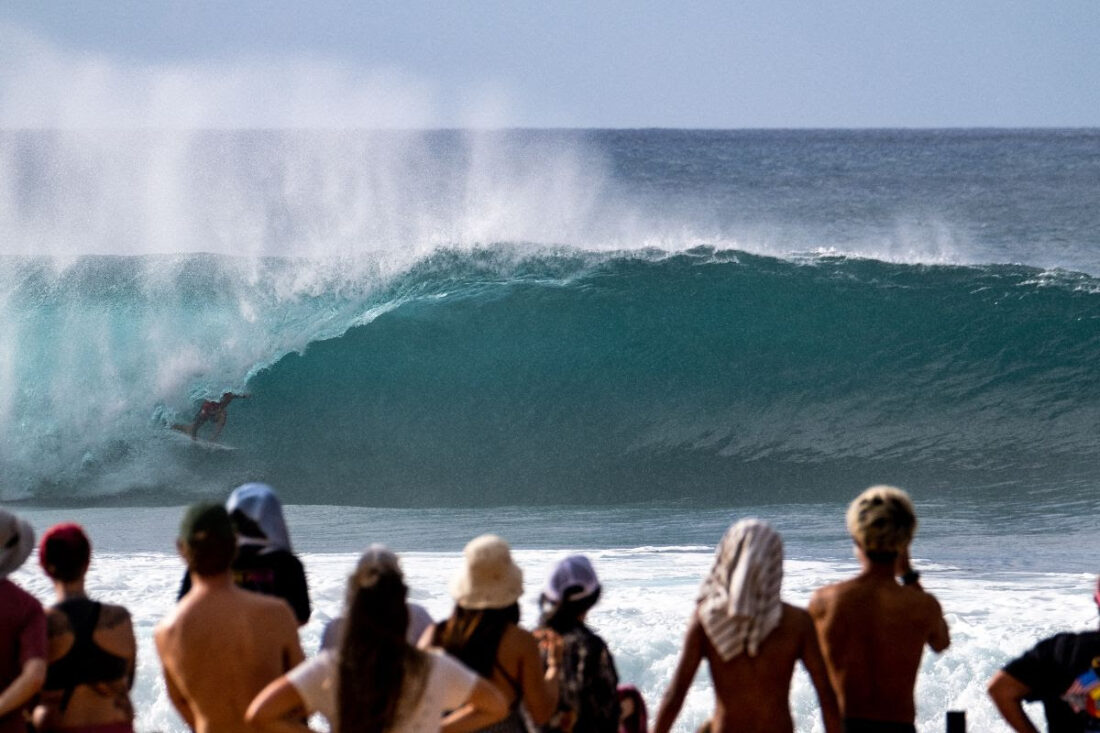 The 2X WSL Champion got his Final heat underway right off the starting horn to post a 6.00 (out of a possible 10) and 12.40 (out of a possible 20) heat total within the five-minute mark to get his rhythm, leaving the field chasing him the rest of the heat. But, younger brother Ivan found an excellent 8.00 to get himself right back in the heat and Mamiya’s late surge had Florence against the ropes heading into the dying seconds. Then Pipeline delivered one last golden opportunity and Florence seized it to earn a 9.67 and the event win.

“It feels so amazing just to win this event, especially after Haliewa too,” said Florence. “Coming into this event I was actually a little bit nervous. There’s a lot of really good surfers in this event. But, it was fun to get back into the rhythm and be competing out here again and getting ready for what’s to come in the next few months. I was really stoked, it was a great final. And to win like that is always really fun. Last second, it was all building up for those last seconds.”

Florence’s form went unrivaled from the first heat where posted a near-perfect heat total of 18.83 and started his flawless finals day run, not dropping a single heat throughout the event. This marks the North Shore’s own tenth victory on the North Shore across all professional competitions, notching his ninth in Haleiwa, surpassing the late 3X WSL Champion Andy Irons (HAW).
“That’s crazy I can’t even believe that, even that I was tied with Andy,” added Florence. “Just looking up to him the whole time I was growing up, he was such a big inspiration in my life, my brother’s life, all of us that grew up here watched him surf. (We) watched him win World Titles and battle with Kelly, (and) still draw so much inspiration from that today.”

Pictured: Mamiya stepped up time again to prove himself at one of the world’s heaviest waves. Credit: © WSL / Keoki

A tough break for Mamiya left him waiting for one more opportunity to regain the lead but it didn’t come and finished with a runner-up once more. Mamiya finaled at this event in 2019 and brought that consistency back to one of the world’s heaviest waves once more with dynamic performances from start to finish. The Pipeline standout accrued excellent scores in each of his three heats heading into the Final, helping eliminate CT competitor Seth Moniz (HAW) and fellow Pipeline specialist Koa Smith (HAW), and now finds himself into the 2022 Billabong Pro Pipeline CT event

Pictured: The younger Florence brother showed what he’s capable of in a jersey at Pipeline with a perfect 10 and numerous excellent rides. Credit: © WSL / Keoki

A dream day for Ivan Florence unfolded into reality as he found his way through each heat, sharing three heats with his brother, John John. The 25-year-old garnered the event’s only perfect 10 on a jaw-dropping Pipeline barrel to earn his way into the Semifinals before securing his place in the Final on an 8.83 along with multiple excellent-scoring rides throughout the day.

“Probably the most fun I’ve had at Pipeline in so long, just being out there with my brother,” said Florence. “Being out there against him is really really cool, its so exciting, I love it. It’s just so much fun. Just making it through all the heats and stuff, it’s just so sick. Surfing Pipe with no one out, it’s unbelievable, it’s the best thing you can do”

Pictured: At 6’6, Hunt found his way through the monstrous caverns of Pipeline in each heat with ease. Credit: © WSL / Keoki

Kainehe Hunt’s buzzer-beater on a deep Pipeline gem in the Semifinals pushed the Kauaian into his first-ever Final at the famed reefbreak after a brilliant performance from start to finish. Hunt overcame a stacked Quarterfinal heat with former CT competitor Keanu Asing (HAW) and QS veteran Ian Gentil (HAW) after a win in his Round of 32 heat to begin the day. Now, the young competitor is locked into a Challenger Series spot moving forward.

“I’m stoked and the main thing is my support crew,” said Hunt. “I know my family is always there for me. This event was super special, having the little guy here, my dad, just stoked. I overheated in the Final and I kind of crapped out, but it’s all good. I’m just stoked to come in and have all this support over here.”
For more information, please visit www.WorldSurfLeague.com.