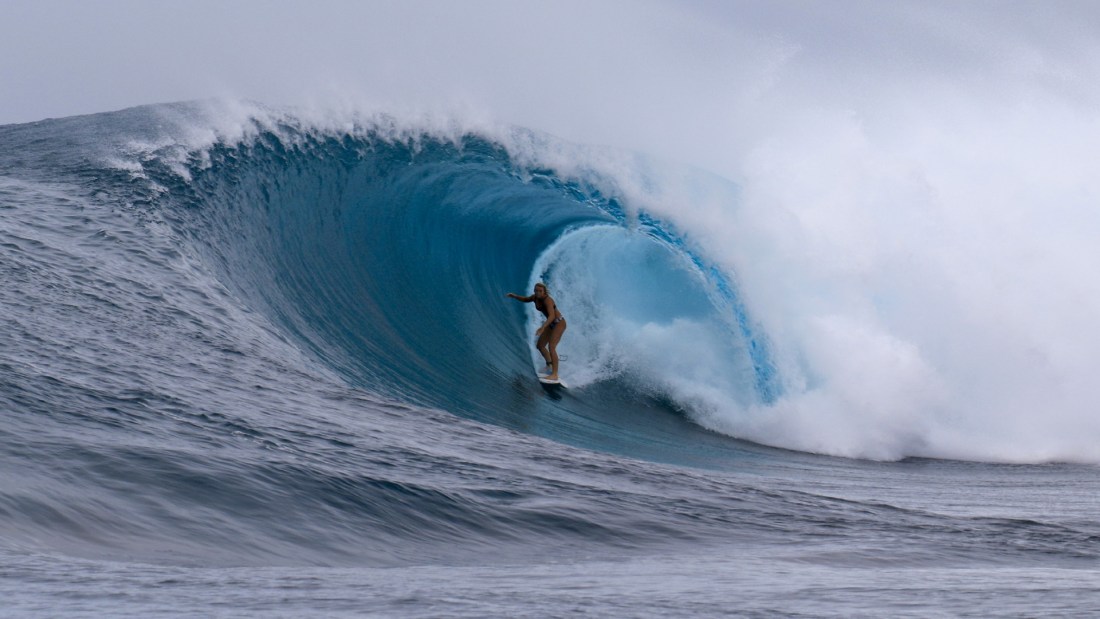 Kirra Pinkerton is the type of person who knows what she wants and goes after it. Pinkerton grew up in San Clemente, California and started surfing with her dad when she was just two years old. They travelled back and forth between California and Hawai’i, surfing and competing in local kid’s contests. By the time she was nine, Pinkerton knew she wanted to be a professional surfer.

When Pinkerton was sixteen, she competed in the WSL’s Junior Championships. She went into the event with low expectations, but ultimately ended up winning. The win was eye-opening for the young surfer and was the validation she needed to know she had what it took to compete at the professional level.

“I remember at the end of the event I cried to my dad, ‘I just want to keep doing this,’” says Pinkerton. “It was the best feeling that I had ever felt.”

In 2019, Pinkerton was in top form, but when COVID-19 hit, competitions were put on hold and she started losing her competitive drive. When contests started back up, Pinkerton wasn’t planning on competing, but already having the points, she decided to keep going.

“I used to be super competitive and would love to go and make a bunch of heats and win everything,” says Pinkerton. “Lately, I’ve just really loved travelling and doing competitions. I’ve made good friends with people on tour and it’s like a big family—we all just push each other to get better at surfing.”

For the past six months, Pinkerton has been putting in a lot of time and work. Instead of focusing on what others do to prepare for competitions, she’s been focused on what she needs to do in order to be her best self in heats as well as in her free surfing.

When she’s home in San Clemente, Pinkerton is a regular at Lowers. She surfs the iconic wave nearly every morning and drives north three times a week to work with her trainer and surf in Huntington Beach. She does yoga every day to keep her body loose and tries to cook regularly although admittedly, she isn’t the best.

At the 2022 ISAs in Huntington Beach, California, her rigorous training paid off. Pinkerton wasn’t supposed to be in the contest, but she got a last minute call and she answered it. The U.S. team included a lot of surfers from San Clemente and according to Pinkerton, the level of support and camaraderie was exceptional. In the final, Pinkerton faced off against Sally Fitzgibbons, ultimately coming away victorious. Not only didn’t Pinkerton win gold, but she helped team USA land the gold and earned an extra spot for the U.S. in the 2024 Olympic Games in Paris.

“It felt like a miracle,” says Pinkerton. “It somehow worked out to be exactly the amount of points we needed to get the win and that made it that much better.”

Pinkerton has some serious goals she hopes to add to her already impressive resume. She plans on qualifying for the Championship Tour in the next year or two. Once she qualifies, she wants to win a world title and become the first person to win every event on tour. She knows it’s a lofty goal, but she’s willing to put in the work required to achieve it. Additionally, Pinkerton hopes to qualify for the U.S. Olympic team and use that extra spot she helped earn.

On top of contest goals, Pinkerton would like to get into big wave surfing. She’s already ridden some pretty sizable waves at Waimea and in Indonesia, but she’s got her sights set on Jaws, Teahupo’o, Cloudbreak, and Mavericks if she can handle the cold water.

“I’ve always had a passion for surfing big waves,” says Pinkerton. “When I was a little kid, I would throw myself into closeouts and had no fear paddling into waves.”

Always an overachiever, Pinkerton has been homeschooled since sixth grade and graduated high school by the time she was 16. She’s toyed with the idea of college but has been bouncing between ideas for what she wants to study. Initially, she considered architecture or culinary school, but has decided she’s more interested in holistic and natural healing. Perhaps she’ll attend a university or maybe she’ll study it on the road between contests. But right now, the nineteen-year-old is focused on surfing and for now, that is enough.