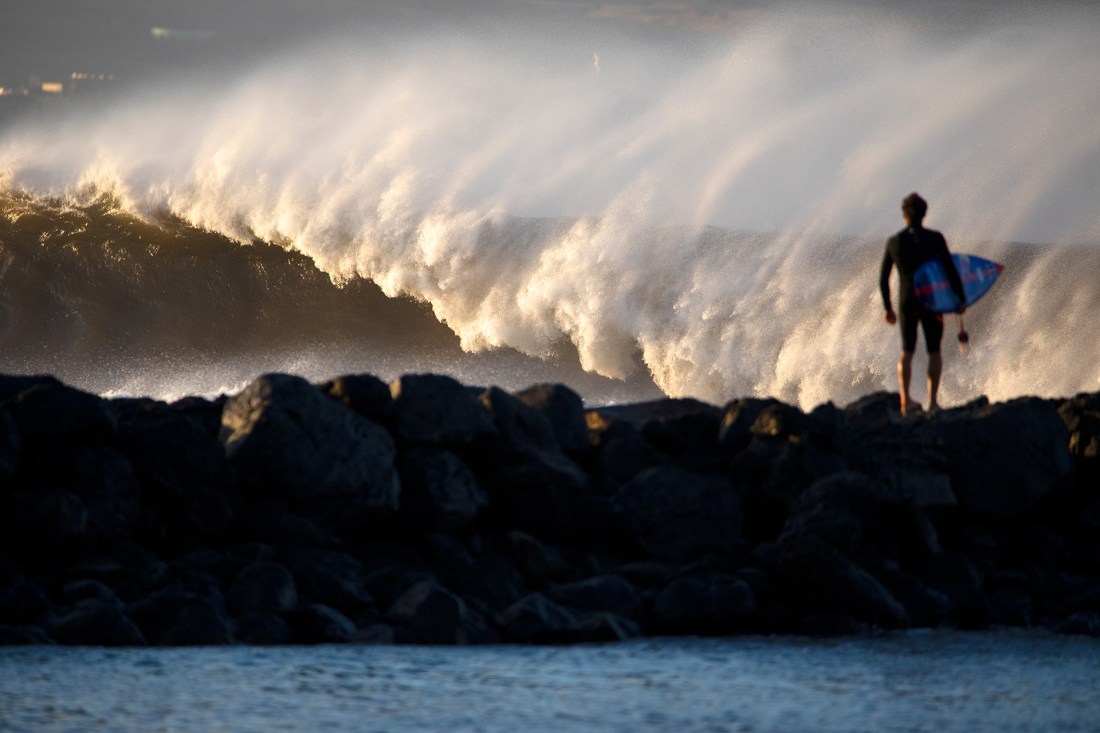 It really does feel like it was all a dream. Words can scarcely describe what was experienced by several hundred of Hawai’i’s finest surfer’s, and witnessed by thousands of spectators. It was euphoric, monumental, historic. Perhaps one of the most remarkable days of big wave barrel riding to ever go down. Freight trains has long been referred to as “the fastest wave in the world” as well as “the 8th wonder of the world.” My first experience surfing there in the mid eighties as a teenager was the beginning of a lifetime obsession.

As many Maui surfers have noticed, I am always there, checking it, sometimes just sitting and watching it for hours, waiting for it to turn on. Freights is also the most fickle wave in the world. Typically it will break just a few times every summer, somewhere in the waist to slightly overhead size range. On these typical swells the sets are always very inconsistent, sometimes over 20 minute waits. But when it does turn on, everything else becomes secondary.

The incredible righthander is actually named Freight Trains after the way it steams down the line and the sound the sections make as they pitch out and land in the flats with a very loud and rythmic chuga-chuga-chuga. Sitting in the lineup as a set rolls by you would swear an actual freight train was rushing by!

The Freight Train line up sits just adjacent to the Ma’alaea Harbor entrance where many fishing charter boats, small private fishing boats, Molokini dive tours, and whale watch tours among others launch. The Maui division of the US Coast Guard is stationed here as well. The first cattle to arrive on Maui landed here at Ma’alaea in 1793, and Maui’s first airport was established here in 1929. About a decade ago, The Surfrider Foundation Maui Chapter was successful in preventing the Army Corp of Engineers from extending the breakwall which would have significantly impacted the reef and the magnificent Freight Trains. Thankfully we can still enjoy this outstanding break from time to time.

The most peculiar thing that I’ve noticed over the years is that it never really does anything in between the typical 2 to 4 ft inconsistent swell and these bombing 8 ft unicorn swells. It’s definitely a feast-or-famine type of phenomena. In the 38 years that I have been surfing here on Maui, there have been only 3 of these magnificent occurrences. 1999, 2005, and 2022.

The 1999 swell was solid 6 to 8 ft for two days and the wind conditions were impeccable. Perfect light to moderate, straight offshores. I caught 2 of the best ways of my life as I was 29 years old and nearing my prime. Local standouts included Lloyd Ishimine, Analu DePonte, Chris Vandervoort, Eric Totah, Mark Anderson, and many others. Pancho Sullivan, Myles Padaca, Michael Ho, and a handful of other Oahu pros flew over and scored some perfection.

The 2005 swell was solid 6-8 and lasted two days as well but the wind was quite a bit stronger and not quite so straight offshore, veering a bit more side offshore and creating a bit of side shop and ribs to contend with, although some incredible rides still went down. I unfortuneately suffered stitches to my hand when someone ditched their board right in front of me as I was driving through a barrel on the morning of the first day of this swell and missed most of this event. Some of the best rides of this swell were had by Alika Moepono, Nalu Wallace, Micah Nickens, and Matt Kinoshita.

With the consistency and size of this swell combined with favorable winds, and so many of the world’s best barrel riders on hand, this has to have been one of the most notable barrel riding events to ever take place. Just the fact that Kai Lenny proclaimed his 11 second tube ride to be the longest he has ever gotten on an ocean produced wave, alone, is probably enough to support this claim. And that was just one of many, many extraordinary rides!

The videos and photos don’t really do justice to just how intense and intimidating this wave is. It is basically a thick slab that rifles down the line for a couple hundred yards at extra high speed! It is incredibly shallow and whenever there is a big swell, big chunks of reef get flipped over leaving exposed reef in areas just inside of the breaking waves. Several new chunks were flipped over by this swell. There were many encounters with the reef and endless broken boards throughout the weekend.

The non stop adrenaline and energy, all day long for two days straight, whether in the water or watching from the shoreline was like nothing I’ve ever experienced! It took nearly a week to recover mentally and emotionally, and even longer for some physical injuries. I just can’t stop thinking about the fact that if it takes another 17 years for another swell like this, that I will be 69 years old, and will probably not be wanting to be in the line up, and may be just enjoying the spectacle from the shoreline. Or perhaps I will be searching out some random mysto spots down the coast. Probably a bit of both….