Meet Lebanon’s One and Only Surfboard Shaper 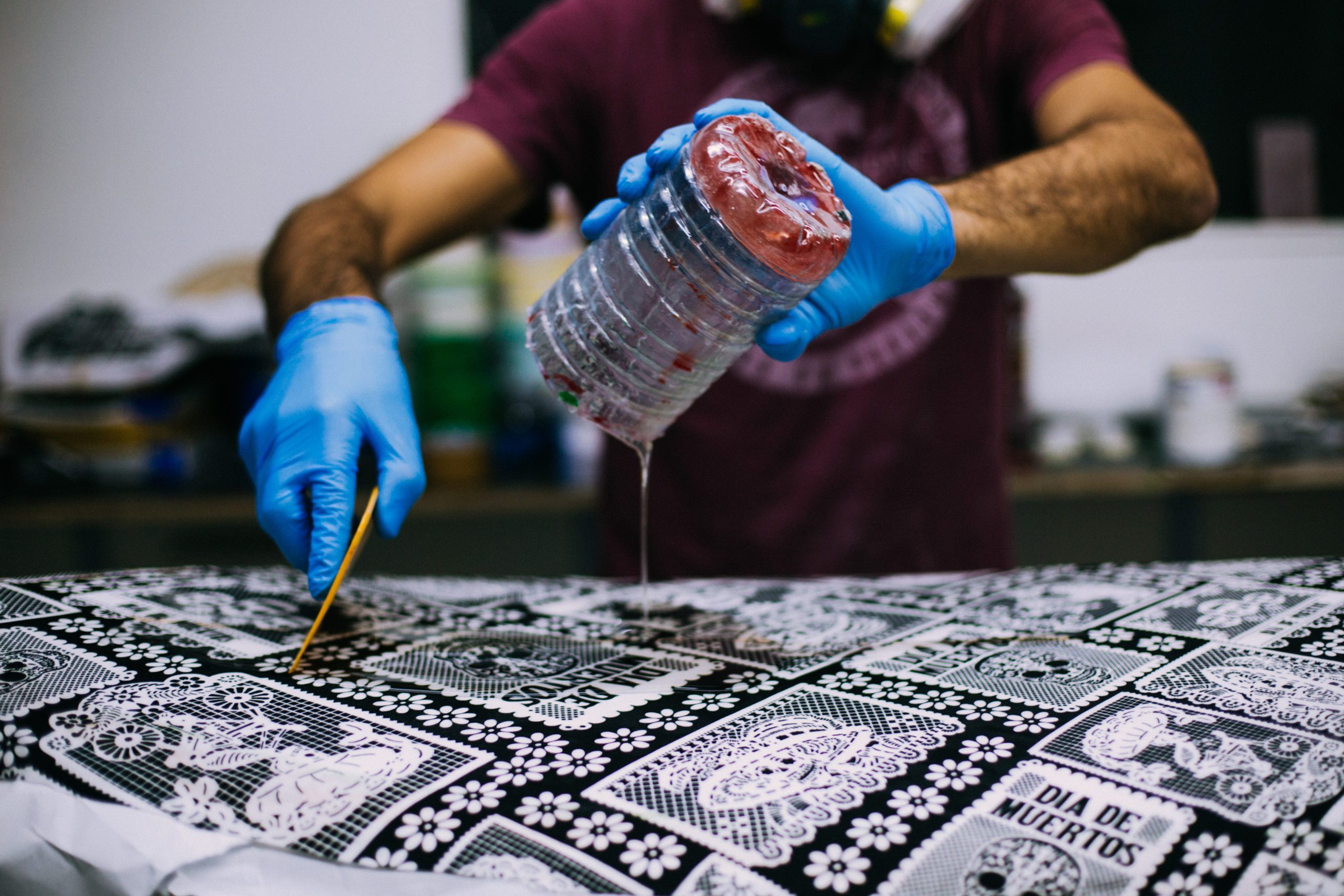 Surfboard builder Paul Abbas lives in the city of Joünié, 10 miles north of the Lebanese capital of Beirut. From the slopes of Mount Lebanon, he can see the broad sweep of the Mediterranean Sea that produces surprisingly good waves in winter. It’s also here, on the roof of an old apartment block nearly 10 years ago, that he taught himself to shape surfboards, relying on ingenuity, determination and lots of YouTube videos.

Now 40, Abbas is Lebanon’s only shaper. He clearly recalls growing up during Lebanon’s Civil War. “Often, when we were playing outside, we would have to run for the bomb shelters when we heard the bombs starting to fall,” he says. “Some nights we’d sleep on the stairway of our building because it was the safest place to be when the fighting got too close to our apartment.”

But his was also a normal childhood in many ways: playing with the other neighborhood kids, riding his bike and spending summer days at the beach swimming and snorkeling. It wasn’t until he was 23, however, that Abbas got his first taste of surfing after catching a few waves on a borrowed bodyboard.

“I was hooked immediately and bought my own bodyboard the next day,” says Abbas. “I really wanted to surf but, back then, there were no surfboards in Lebanon. Anyone who had a surfboard either bought it home from a trip abroad, or it had been left behind by visiting surfers.”

Abbas bodyboarded for seven years until he came across a website that outlined the process for making a surfboard.

“I read all the instructions, drew some plans, looked for materials, and made my first board,” he recalls. “It was a 6’6” fish – that was the biggest block of foam I could get back then. I cut it and started shaping it on the roof of a friend’s house on New Year’s Eve of 2010.”

The board took three months to make from start to finish and was christened in less-than-stellar conditions. “It was windy and choppy. The board wasn’t very good but I managed to catch a small, mushy wave,” says Abbas. “I still remember exactly how it felt. Like magic.”

The fledgling shaper spent the next few years scraping together rough materials and making boards for friends, mostly for free if they covered the costs.

“I didn’t have the skills, the right materials, equipment or enough knowledge,” he recalls, “but I was determined to get better at it.” When a few paying orders started trickling in, he immediately re-invested the money in tools that he bought online from shaping websites in the USA.

Despite this, the feedback he got was limited and progress was slow. “So I started watching a lot of YouTube channels, especially the ones that reviewed boards,” says Abbas. “I’d soak up all the information they gave about what makes a certain board go, or how a certain feature worked in different conditions, then I’d try it on my own boards. That’s how I taught myself to shape.”

In 2016, French ex-pat Pierre Nicoud and Hadi Beydoun from Lebanon set up the West Factory on the Ivory Coast. It was the first surfboard factory in West Africa and would also be Abbas’s big break. “I got the opportunity to go shape there for a month. That was the first time I was shaping as a full-time job and I taught a couple of the locals how to shape and glass. I learned a lot myself, too.”

Since then, Abbas has shaped hundreds of boards and became the West Factory’s resident shaper after he quit his longtime job as a TV repairman to pursue his calling full-time. His specialty is shaping beautifully crafted fishes, mals and eggs. He now splits his time between the Ivory Coast and Lebanon, where he services a small but growing market. While he may be the only shaper in the entire country, surfing is not new to his homeland.

“There were surfers here as far back as the 70s, before the war – they even held a competition back in the day,” says Abbas. Surfing all but disappeared from Lebanon’s shores during the civil war but started to emerge again in the early ’90s, especially in Batroun, a small city north of Beirut. In the past decade, the scene has grown considerably and a number of surf schools have even opened up along the Lebanese coast. The waves can get good, too, but like everywhere in the Mediterranean Sea, it’s fickle. The key, says Abbas, is knowledge and patience.

“Most of the waves we get are small period wind swells. But from time to time, we get longer period swells that reach us all the way from southern Italy. Those are the best.”

Anything on the charts from one meter (3 feet) and nine seconds upwards will produce good waves, says Abbas. Or, you can just keep your eye on Nazare.

“The big Atlantic storms that bring monster waves to Western Europe often keep traveling overland to reach the Mediterranean, where they make good waves for us too,” he explains. “So, we’re kinda surfing the same swells that make Nazare work. Or at least I like to think [that],” he quips. 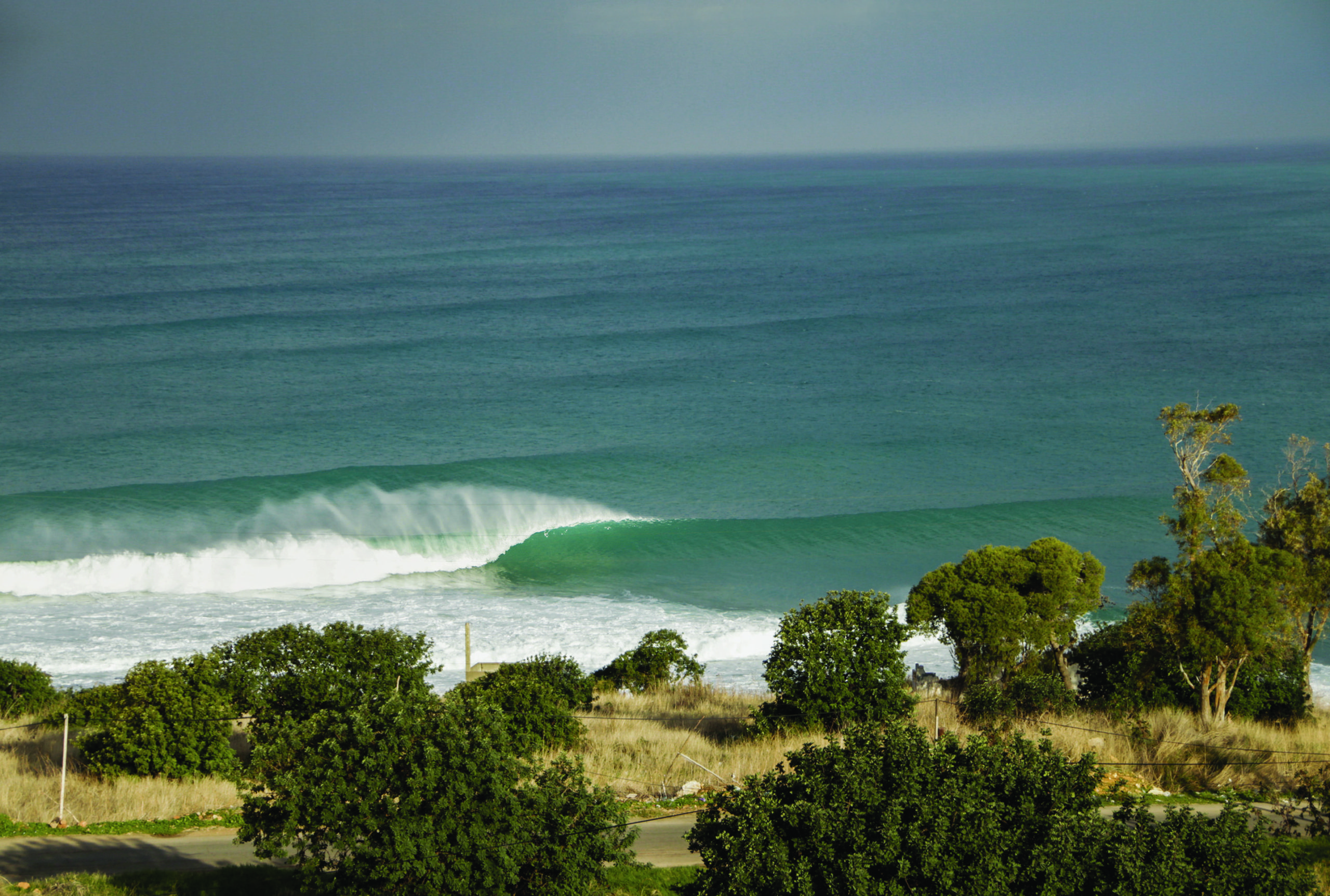 Lebanon’s political situation is as unpredictable as the surf. Hemmed in by Syria to the north and east, and Israel to the south, the country sits in the crosshairs of geopolitical tensions and has been ruled by a sectarian elite since the end of the civil war in 1990. The government has long stood accused of massive corruption and self-enrichment, while inequality and inflation have soared over the past decade. In an unprecedented move, protestors across religious and ethnic lines banded together at the end of 2019 and effectively shut Lebanon down, demanding the prime minister and entire cabinet resign and a new government to be formed along non-sectarian lines. Heavily over-indebted, Lebanon has since plunged into an economic crisis.

“Businesses are closing, people are losing their jobs, and there are ongoing demonstrations against the government and political system that got us into this bad situation,” says Abbas, who has felt the impact directly. “I have had at least a 50 percent drop in custom orders so far this year.”

To overcome this Abbas hopes to start exporting to other countries in the region, like Egypt and Dubai, but the Coronavirus pandemic has exacerbated the situation. “Right now, there is no surfing in Lebanon,” says Abbas. “I still have a few orders but the real problem is nobody knows how long this will last.”

The other immediate challenges Lebanese surfers face are less complex, but also daunting.

“There are a few good waves here that no one surfs because the water is so polluted, especially around the densely populated areas of Beirut,” says Abbas. “The other big problem is privatized beaches.”

Vast tracts of the Lebanese coast are owned by private resorts, which often build piers or break walls to protect their beaches. “They either close the beach to the public or simply destroy any wave that was breaking there,” explains Abbas. “There are also a couple of good waves that break right in front of military zones and are off-limits to civilians. We tried once to reach one of them, driving the whole day to find our way there. When we finally arrived, some soldiers came out waving their guns and told us, ‘Go play somewhere else’.”

But there is still room to explore, says Abbas, who describes Lebanon’s coastline as beautiful and full of potential. “My favorite wave is north of Batroun. The beach is hidden behind a mountain that blocks a lot of the wind that usually comes with our big, stormy swells. It breaks along a pier and runs onto a sandbank and can get really good, but it only breaks a few times a year. I’ve also heard stories about good waves in the south.”

As for what the future holds for this corner of the Mediterranean Sea, the shaper is uncertain. “It’s a complicated region with many factors that you have no control over, like wars and political ambitions of the super powers. The only thing the people can change now is the sectarian mentality that’s ruled the political scene. And on that point, I feel there’s some hope for change with these popular movements and the next elections,” he says.

“Our surf culture is evolving too, and there are definitely still some good waves waiting to be discovered.”