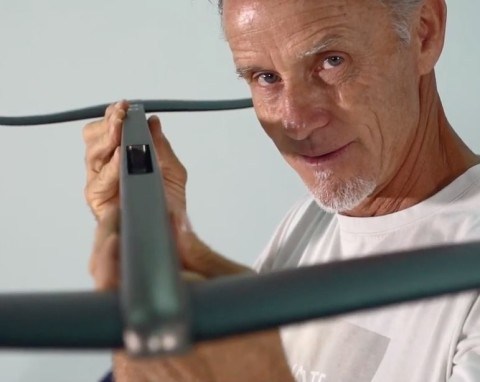 Professional athlete Michael Booth’s podcast with Svein Rasmussen, chief innovator at Starboard is nothing short of enlightening, entertaining and informative. A rich history between these two men give the conversation depth and authenticity as they discuss a mutual love of watersports, and Svein’s history from Olympic windsurfer to chief designer at Starboard, Ltd.

Tune in and be entertained.

Svein Rasmussen established himself with an incredible windsurfing career. He won the Mistral World Championship in 1983 and competed in the 1984 Olympic Games in Los Angeles. He placed a highly respectable 11th at those games.

Later, Svein launched his company Starboard in 1993 with the goal of inspiring as many people as possible to enter the sport of windsurfing. His method?  The design and development of windsurfing boards that are more appealing to the general public. Svein Rasmussen has always been at the wheel, driving industry and board sport designs forward from entry level to high performance. His reign is nothing short of spectacular.

Svein grew Starboard to include stand up paddle boards as the paddling craze began. His eye for design encompasses everything from entry level and inflatable SUP boards to high performance surf and racing boards, considered the elite on the market. Starboard also embraces the innovation of foiling across multiple disciplines. And recently, Starboard jumped back into the wind space with the release of the Freewing Air, to add wing foiling to their already heady mix of products.

In this podcast, Starboard Pro Athlete Michael Booth chats with Svein about his passion for sustainability, Svein’s childhood, why he loves the ocean so much and his still present day, child-like exuberance when he sees new products.

Svein’s story will inspire. It will also have you heading out the door to get your feet, and possibly, whole body wet.  Unforgettable & real, this man knows watersports.

You can find more of Michael Booth’s podcasts on iTunes, Spotify and all your favorite podcast channels to listen. You can also search them on YouTube if that’s more your thing!