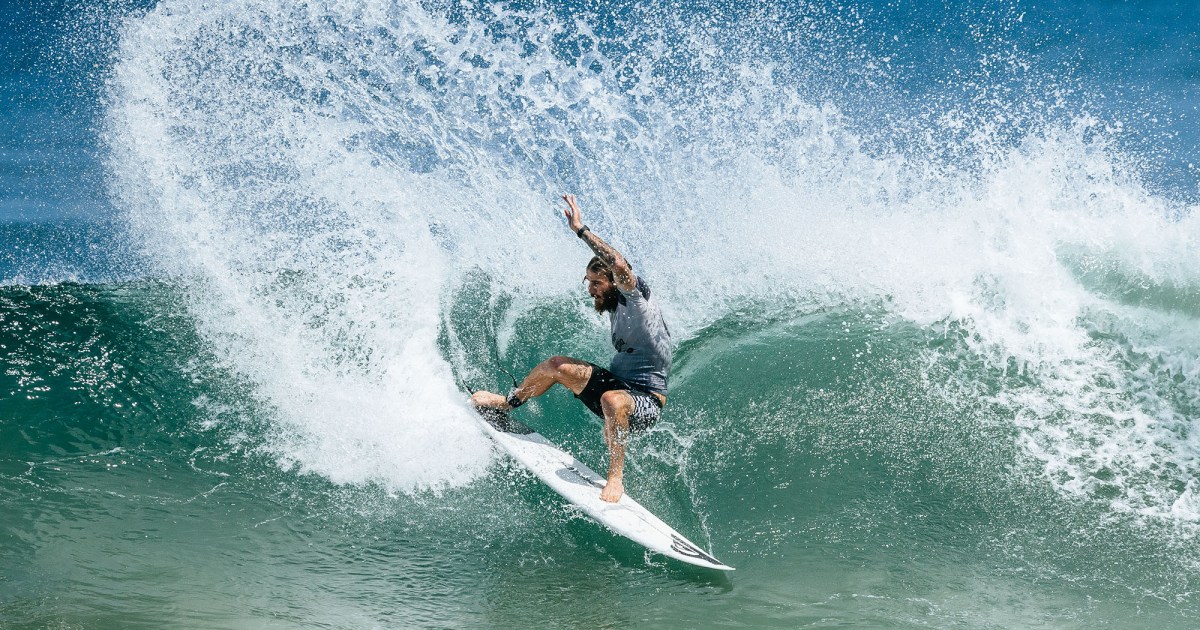 Yesterday, during the opening rounds of the Corona Open Mexico, the Tour’s resident mullet-toting, power surfer announced he’s calling competitive surfing quits after this event. Mikey Wright will be hanging up his jersey post-Barra to focus more on making movies, free surfing and well, entertaining the masses with his no-holds-barred approach to surfing.

Following the aforementioned, Day 2 saw additional upsets, including the bowing out of World No. 3 Filipe Toledo and Olympic silver medal winner Kanoa Igarashi. For a full recap of the first two days’ events, continue reading or click here and here.

The second day of the Corona Open Mexico presented by Quiksilver, the seventh stop on the World Surf League (WSL) 2021 Championship Tour (CT), completed the men’s and women’s Elimination Rounds, and witnessed major upsets to the men’s WSL Final 5 in the Round of 32.

Five of the six Brazilian surfers participating in the Elimination Round have performed well and advanced to the Round of 32. Peterson Crisanto (BRA) guaranteed his spot in the next round after earning an excellent 8.33 score (out of a possible 10).

“I perform better under pressure,” said Crisanto. “I tried to improve my surf with good maneuvers and I got lucky to catch a really good wave. My focus is good now and I’m 100% ready to give my all here in Mexico and in Tahiti, so I can re-qualify for the CT in 2022.”

In Heat 2, Deivid Silva (BRA) took the win while Yago Dora (BRA) finished in second place, which resulted in the elimination of local hero, wildcard Jhony Corzo (MEX). Adriano de Souza, Jadson Andre and Alex Ribeiro battled in an all-Brazilian Heat 3 with the hopes to remain in the competition. Ribeiro was the one eliminated after earning a combined score of 7.57 (out of a possible 20), the lowest score of the round.

The women’s Elimination Round was up next, and Australians Isabella Nichols, Macy Callaghan, and Keely Andrew all put up a solid performance at the four-to-six-foot waves in Barra De La Cruz, advancing to the next round.

“I found myself in the Elimination Round quite often this year,” said Nichols. “But coming into this event I felt really good, and on the bright side, I got to surf one more heat here at one of the most fun waves in the world. Silver linings.”

Gabriel Medina Takes Round of 32 to the Air

The men’s Round of 32 started with a show of innovative surfing on the Olympic rematch between Michel Bourez (FRA) and two-time WSL Champion Gabriel Medina (BRA). In a down-to-the-wire heat, Medina took to the air to take the win.

“I was praying for one more wave,” said Medina. “I know the waves are there, but it’s just super slow so I was trying to wait until the end. Michel was surfing really strong, so I knew I had to go big. I’ve done that trick before but honestly I wasn’t trying to do it at all. I can’t even remember what I did on that last wave. I’ll have to thank God for that one.”

Reigning WSL Champion and No 2 in the rankings, Olympic gold medalist Italo Ferreira took the win against Wade Carmichael (AUS) in a very close heat, getting the score needed to advance in the last minutes of the action, and advancing to the Round of 16 where he will face 11-time WSL Champion, Kelly Slater (USA).

“It’s nice to compete against the best guys in the world and push myself,” said Ferreira. “In the next round I just want to catch good waves, go vertical, have speed and power, and show some progressive surfing with dynamic maneuvers. I can’t wait!”

In a nail biting heat, Olympian wildcard Rio Waida (IDN) surprised everyone by taking out world No. 3 Filipe Toledo (BRA) on the very least wave of Heat 9.

“I’m trying to surf my best,” said Waida. “I didn’t know I was going to have enough to beat Filipe. He is one of my favorite surfers, so I’m very happy I could win. I’ll try to surf more like him moving forward because I’ll have to go big on the next round.”

On the last heat of the day, world No. 5 Griffin Colapinto (USA) got eliminated by wildcard Mateus Herdy (BRA), and will now need a big result in Tahiti to clinch a spot on the WSL FInal 5.

World No. 6, Kanoa Igarashi (JPN), who advanced in the Elimination Round after finishing in second place behind Crisanto, faced Kolohe Andino (USA) for the second day in a row, this time in the third heat of the Round of 32. With a 0.64 score difference, Andino took the victory again and eliminated Igarashi from the event in Mexico.

“I was feeling nervous coming into the event,” said Andino. “I know there are four guys that I love battling for a spot in the Final 5, especially Griffin (Colapinto) who I consider my little brother. I hope I don’t get to surf against him, and I’m happy I was able to help him out by winning this heat against Kanoa. My last three heats surfing have been with Kanoa, one being at the Olympics, but I don’t want to think about rivalry or get in my head, I just want to surf as much as I can. I got a whole new perspective on life this year after my injury, the Olympics and with my wife being pregnant. So I’m just trying to keep myself loose, and surf the best I can.”

Leonardo Fioravanti (ITA) also took the win against Olympic medalist Owen Wright (AUS), who won bronze in Tokyo. He will be facing rookie Morgan Cibilic (AUS) in Heat 3 of the Round of 16.

“I grew up with the Wright family,” said Fioravanti. “Owen is like a big brother to me, and I knew it was going to be very hard to beat him. I’m glad I got out of the water on the good side of it, taking the win. I’m having a really good time here in Mexico, it’s been a great week.”

After the competition wrapped for the day in Barra De La Cruz, some of the world’s best surfers joined Quiksilver for an expression session riding iconic surfboards that have helped shape the future of surfing in one way or another.

The winners of the Quiksilver Icons of Surf Super Session were Mikey Wright and Caroline Marks. Wright rode a remake of the board used by Andy Irons when he won the last CT event in Mexico 15 years ago, while Marks rode a Gerry Lopez Single. Each winner received a $5,000 prize and the chance to pick one of the iconic boards to bring home.