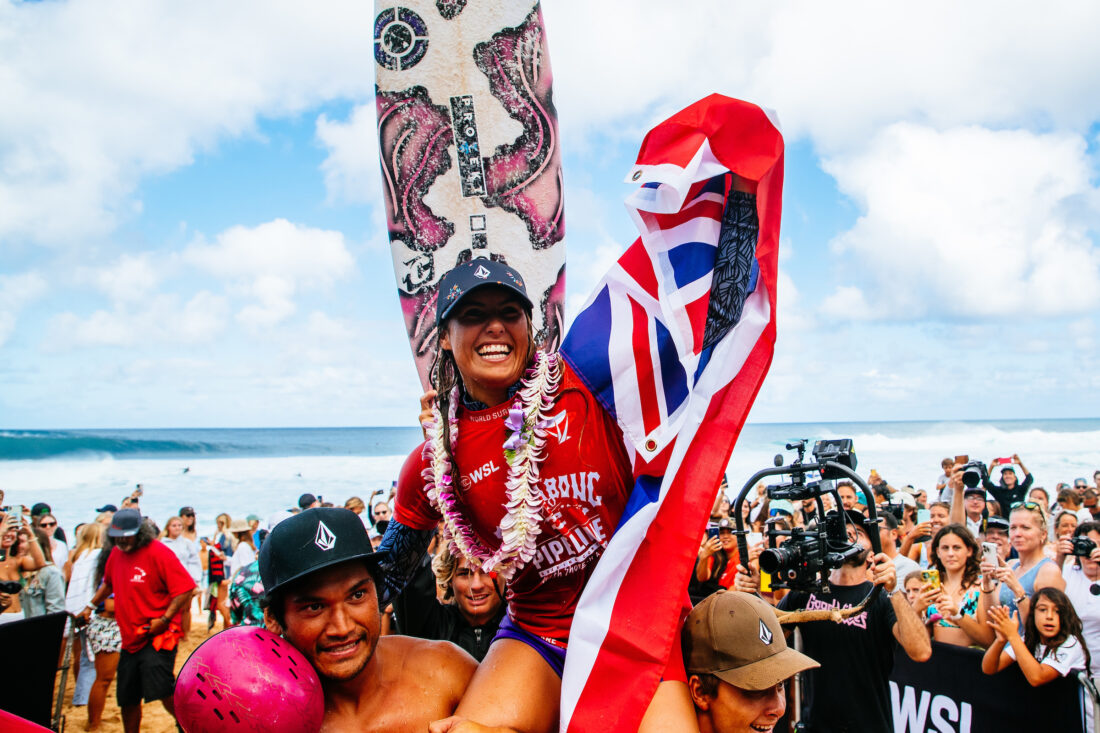 “I can’t believe it, I’m just losing it right now,” Wong said. “This is the best moment of my life and I’m so baffled. I never thought I was ever going to accomplish this. Carissa Moore is my favorite surfer and my hero, I always wanted to have a Final at Pipeline with her.”

The 22-year-old local surfer that has committed her time to the Pipeline lineup has already proven herself at one of the most challenging waves in the world, and now has put the CT on alert with her performance in competition today. A five-time finalist on the Qualifying Series at Pipeline, she won the HIC Pipe Pro last December and stepped up her game against the world’s best athletes to claim her first CT win. She is the first wildcard to do so since two-time World Champion Tyler Wright (AUS) in 2010 just up the road at Sunset Beach.

In the Final, Wong picked up right where she left off with two back-to-back rides on Banzai Pipeline to post an early lead of 12 points. The crowds erupted every time the local hero got up to her feet and as she made every wave she paddled for in the opening half, the momentum seemed to be on her side. Another successful ride on at Pipeline pushed the requirement for Moore further up and the World Champion was against the ropes with 10 minutes remaining on the clock.

As time ran out, Wong got a final opportunity when she started super deep, counter-peak on a left, and got a clean exit for a 7.67 (out of a possible 10) and a victory lap on home turf as Moore admitted defeat and congratulated her opponent. Now sitting as World No. 1, Wong will also receive a wildcard slot into the next stop on the 2022 Championship Tour, the Hurley Pro Sunset Beach, which opens next week.

Now a two-time runner-up at Pipeline, Moore added another stellar result on her resume to kick-start her defending campaign on the 2022 CT. Unable to find the exit door on a few big waves in the Final, Moore was humbled by the performance of her young opponent and gracious in defeat.

“I feel like I’m constantly learning,” Moore said. “Today was a little bit outside of my comfort zone, there was a lot of water moving and for me, it was just about putting in some more time with only another surfer out. Congratulations Moana, there’s no one more deserving, she’s put in years and years out here and you could tell she did a great job.”

Australia’s Wright put up a great fight in the first Semifinal against Wong, locking into a Backdoor bomb for an 8.83, the best single score of their heat. However, the former World Champion failed to back up her main score and a priority mistake in the dying moments of the heat ended her run at the inaugural women’s Billabong Pro Pipeline in equal third place.

“It feels amazing to have this opportunity,” Wright said. “We’re in the pioneering stage, Moana is literally the best of us, she’s trained so hard out here and was always going to be the number one to beat. I was scared but by the end of the heat, you’re starting to figure out where your lines are. None of us have been out there when it’s this big and nowhere close to being in the position. Overall I’m absolutely thrilled, we do deserve to be out there and to have a position in the lineup and I think we’re really showing that right now and it’s really exciting for the future.”

In the second Semifinal, Lakey Peterson (USA) did not find any opportunities to score and fell short against Moore. But the perennial title contender posts a strong start to her 2022 campaign with an equal third place.

For highlights from the Billabong Pro Pipeline, please visit WorldSurfLeague.com.