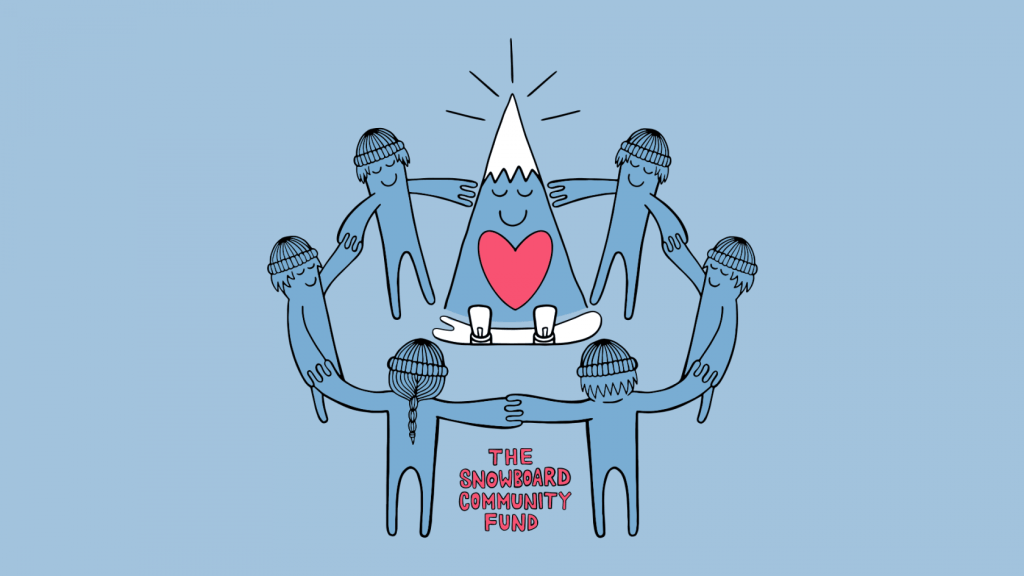 Across the board, snowboard companies are pivoting their operations to contribute to needs during the Covid-19 pandemic, through production, contribution, and organization and distibution of resources. On April 6th, Nitro Snowboards turned their efforts to the economic hardships affecting snowboard industry during this time and launched of The Snowboard Community Fund. In snowboarding, the majority of filmers, photographers, and other media creators operate as freelancers. When travel restrictions and stay-at-home orders were put in place around the world in early March, the timing coincided with what is generally the busiest part of the season for catalog shoots and brand projects—a large way that freelancers are able to stay afloat—in addition to continued efforts filming for video projects and other season-long endeavors that utilize freelance staff. In addition, March kicks off event season—media crews are a big part of this, but even moreso, this is the time when another freelancing segment of the snowboard industry, the park builders, are incredibly busy. Events from Superpark to Holy Bowly to Nine Knights and many, many more have been cancelled or postponed, eliminating hours that diggers spend with their rakes and initiating a domino effect that affects the bottom line for so many who make their wages piecemeal. In an effort to help, Nitro created The Snowboard Community Fund, calling on snowboarders all over the world to donate whatever they can to help support those who create and inspire, via video, photo, words, rake, and snow.

Over the last few weeks, the world has been full of uncertainties and changing faster than it ever has before. It is clear now that the world we live in will continue to be full of challenges and the COVID-19 outbreak will continue to take a toll on people´s health and the global economy. This sudden economic change is something that everyone in the snowboard community has felt strongly, especially the people who inspire us to go out to snowboard, those who create, and those who build features to make snowboarding more fun. We are talking about the freelance photographers, videographers, media creators, and park shapers – people that get up earlier, stay out longer and create late into the night to provide the snowboard community with inspiration, documentation, and features. At Nitro, we are usually spending our time and effort trying to motivate people to join the snowboard community and go outside, get offline and do something worth remembering with friends, but this has had to change during these times. Along with our message to go snowboarding, a few of our core values are giving back to the community, acting like a family, and appreciating those who have helped us get here. Now we have an opportunity to act on these values and create a platform to give back and support these photographers, filmers, creatives, and shapers who are affected by these difficult financial times with the Snowboard Community Fund. If you are one of these freelancers being significantly affected right now, this fund is an opportunity for you. We know that this initial goal of 60,000 EUR initiative is just a start, but we would like to help as many creators of the snowboard community as we can. The situation and longterm effects are changing every day, but we believe that the snowboarder community can help support those who have always given us amazing photos, videos, artwork, parks, and selfless passion over the years get through this together. https://www.gofundme.com/f/snowboardcommunityfund

Over the last few weeks, the world has been full of uncertainties and changing faster than it ever has before. It is clear now that the world we live in will continue to be full of challenges and the COVID-19 outbreak will continue to take a toll on people´s health and the global economy. This sudden economic change is something that everyone in the snowboard community has felt strongly, especially the people who inspire us to go out to snowboard, those who create, and those who build features to make snowboarding more fun.

We are talking about the freelance photographers, videographers, media creators, and park shapers – people that get up earlier, stay out longer and create late into the night to provide the snowboard community with inspiration, documentation, and features.

In less than twenty-four hours, the fund has already reached over 3,000 euro and as momentum increases, Nitro’s efforts will provide 3,000 EU payouts to individuals selected through a drawing. (Nitro’s HQ is in Oberammergau, Germany and the fund is open to accept donations from and provide support to anyone in the world.) We spoke with Nitro team manager, Knut Eliassen to get more info on The Snowboard Community Project.

If you are a freelancer in need, you can sign up here. If you would like to donate, you can do so here. – Mary Walsh

I think we all feel a little helpless with how to contribute something positive to the current situation and finding a way to do something to help others can give us a semblance of feeling some control amidst the chaos. At Nitro, what was the process of figuring out how to help and ultimately creating The Snowboard Community Fund?
Knut Eliassen: You are 100% correct. Right now there is so much uncertainty in the world and larger problems than snowboarding, but like you said, I think everyone wants to try to help those in need somehow—either it is through staying home, doing the right thing, promoting activities on social media, donating to Red Cross, creating healthcare equipment with your 3D printer at home—there are so many ways to help out right now and people are coming together and doing amazing things.

Since the beginning of this outbreak we at Nitro have been very concerned with keeping our team, employees, and their families safe and onboard. This is obviously an important goal and something we took very seriously from the start. After we were able to come up with a long-term plan to make sure this was taken care of, we wanted to do something for the snowboard community and there are a lot of great initiatives out there right now, but we could not find something that supported—or where we as a snowboard community could support—the “freelancers.” So we decided last week to just take the initiative and create The Snowboard Community Fund, which is a simple platform where the snowboard community, friends, and families can come together and bring awareness to the situation and hopefully support. These filmers, photographers, media creators, and park shapers are currently out of work because of the COVID-19 situation and government restrictions on group gatherings and travel, plus all companies are now being forced to streamline their marketing budgets so they can also survive the current and expected economic impacts. Basically, we needed to do something as a brand and as people who are lucky to work for a snowboard company built on people. We just needed to start. So that is what this is, a start.

Why did you guys decide to target the freelance population in snowboarding with your efforts? The photogs, filmers, shapers, etc. are usually a behind-the-scenes crew, so highlighting them is pretty remarkable!
These are snowboarding’s unseen heroes. These are the people who create, document, and inspire us snowboarders every day (thanks to our current social media and snow park world). Some of these people have been doing this for decades and some are just getting started and we want to try to help make sure that they continue on with their passion after this is over. Most of them do it out of pure passion and love and they have created the world of snowboarding we live in. We decided to start help target the freelancers because we could not find a platform where we or regular people could help them, so we just decided to take the first step and create something. These people have given so much to us over the years we just feel it is right to try to give back and bring awareness to this group.

Nitro has always been a company rooted in supporting the snowboarding community.

The webpage for the fund mentions snowboarding is a community that supports and helps out its own. Can you elaborate on this philosophy, both for you personally and also for Nitro as a brand?
Snowboarding is built on people. I would never have started snowboarding if it were not for the people who built up my local snowboard community. Yes, snowboarding is really fun to do by yourself, but it’s one thousand times better with other people. The community aspect of snowboarding has been something that has drawn me in, kept me stoked, kept me motivated, and something I always share with people when explaining what snowboarding is to me.

We are all in this together: Be it the local snowboard shop owner who has been hosting rail jams for twenty years, the new cool video crew that continues to create snowboard movies, the photographers that still shoot film, the sales reps who continue to support the local ripper, the snowboard judge who uses every weekend to go help out the local snowboard contest series, the girls out there who are making all-girl snowboard movies to inspire the next generation, the moms and dads driving their kids to the mountain, the filmer who never stops recording, the ams and pros who continue to dedicate their lives to sending it, the brand owners who put their whole financial and family lives on the line to continue to make snowboards so people can just take a break from life for a moment and go snowboarding, the snowboard media (writers, editors, producers, photographers, filmers, social media nerds, testers, reviewers) who continues to push forward even though things seem to get tougher ever year, the snowboard reviewers who are trying to help people enjoy their snowboarding experience better, the brands who continue to support snowboarding…. I could go on and on with examples of who and how the snowboard snowboarding community supports each other because the examples are endless. Nitro and I are proud to be a part of what I think is the best community on earth. This is why we love snowboarding.

For over thirty-one years snowboarders have been supporting Nitro, freelancers have been supporting Nitro, and we feel it is important as a brand (and personally) to try to give back to a group of people (the freelancers) who have and are contributing to the snowboard community on a daily basis. The Snowboard Community Fund is not about Nitro, it is about the community and we are just using our platform to help initiate and spread this message to hopefully snowboarders and snowboard communities everywhere.

Please help us out by spreading the campaign and message to your friends, family, and local community: https://www.gofundme.com/f/snowboardcommunityfund

THANK YOU TO ALL THE FREELANCERS OUT THERE AND TO SNOWBOARDERS EVERYWHERE! STAY SAFE!