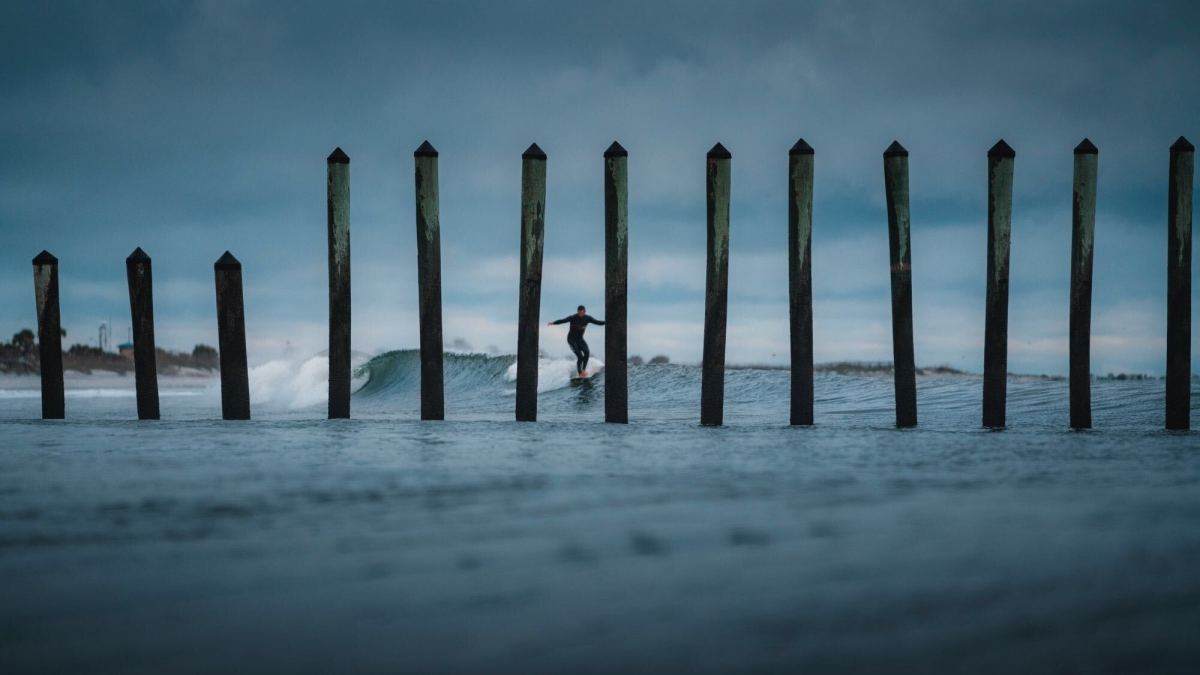 Last week, Jacksonville became one of the first large metropolitan cities to reopen its beaches, allowing for exercise during limited hours, after being closed for several weeks. At 5 p.m. EST, under bluebird skies with temps in the mid-70s, hundreds of people descended on the sand in Atlantic, Neptune and Jacksonville Beaches (all members of the consolidated city of Jacksonville) to walk, ride bikes, fish and head out for a surf.

The ensuing outrage was sweeping, if not scattershot. The rest of the country, especially those areas hard hit by the outbreak, seemed to look on in horror; the hashtag #Floridamorons trended widely. The hashtag #fakenews also proliferated, as many in Jax accused both the local and national media of using trick photography, or misinformation to distort the size of the crowds.

Like surfers up and down the state’s Atlantic and Gulf coasts, Northeast Florida surfers had mixed emotions about the ban on surfing and its subsequent lifting. Some had been petitioning their local leaders to make an exception for surfers. Some continued to surf, accessing local breaks by boat or driving to other counties where the beaches had never closed in the first place. Others abstained completely and continue to do so.

As of Tuesday, the city of Jacksonville had 843 confirmed cases of coronavirus and 15 deaths. For a city of more than one million, the rate of infection is relatively small compared to other large metropolitan areas like New York City (139K infections, 10K deaths) and nearby Miami (19K infections, 202 deaths), owing largely to a range of factors — from the region’s unmatched sprawl and low density to a relative dearth in testing capacity to time since the first confirmed case, locally. Still, just 18,000 have been tested in Jacksonville, though the region reports a 5.1% positive test rate, down from 6.3% two weeks prior.

Without federal mandates, the state’s Gov. Ron DeSantis has left it up to local leaders to determine how strict a lockdown is necessary. Jacksonville, for its part, closed beaches, parks and most government offices on March 20, a day after California’s Gavin Newsom issued his stay-at-home order, and a week after Northeast Florida’s largest annual gathering, The Players Championship golf tournament was canceled.

Prescient as those moves may seem, there are more pandemic-related questions than answers at the moment. And with the majority of major cities extending stay-at-home orders or maintaining the new-normal version of the status quo, the reopening of Jacksonville’s beaches represents an experiment of sorts.

Is it safe to surf? Should surfers feel guilty about legally getting wet?

North Florida surfer and shaper Jay Gordon has unique insight on the subject. As a resident nurse at Jacksonville’s Baptist Medical Center Beaches, he and other frontline medical workers have been preparing for the worst for some time now. Though he believes North Florida is “far from out of the woods” he says there is enough information that he feels comfortable going surfing.

“I think we just have to be cautious,” he says. Gordon’s been riding his bike to a public beach access near his home in Atlantic Beach and surfing solo. “[Surfing]’s currently no worse than going to the grocery store as far as exposure risk. The beach is an essential part of our lives here and a vital part of our overall well being.”

“[Coronavirus] is definitely here,” Gordon cautions. “I think a lot of people lose track of the mitigation efforts because they might not know of anyone personally that is infected. Or they might think that since they are young and healthy that the virus doesn’t apply to them. We have to remember that it can travel person to person asymptomatically, so we all have to keep that in mind and do our part. That piece is very important.”

Gordon reiterates that, with the beaches open, it’s especially important for surfers to continue to help with those mitigation efforts by following the rules set in place by the city’s mayor, which include continuing to follow social distancing guidelines while surfing, as well as entering and exiting the water.

Standout North Florida surfer Cody Thompson, meanwhile, has encouraged surfers to become de facto role models for the rest of the beach-going public. The day before Duval County beaches reopened, Thompson took to his Instagram feed to plead with his vast social media following, imploring them to stay away from popular and perennially crowded spots.

“I had really mixed emotions initially,” Thompson says of his feelings on the day the beaches’ reopening was announced. “I saw the swell [forecasted for the day the beaches would be opened] and just immediately realized that things could get bad if we don’t act responsibly.”

Despite the influx of people on Duval County beaches, surfers heeded Thompson’s warning, staying away en masse from hotspots like the Jacksonville Beach Pier–the Surfline cam rewind certainly bears this out.

Word on the ground is that, despite the large gathering on Friday evening, things have mellowed, and surfers are indeed following the rules.

“That’s why I posted that video,” Thompson says. “If we can’t work together and be responsible, I don’t want to be a part of the reason for a spike in cases.”

In the absence of a coherent state and federal strategy for reopening, surfers in Northeast Florida have been left to follow the guidance of local leaders, who, as of last Friday, advised that surfing was safe. So, they are surfing; just as surfers around the globe arguably would have done given the circumstances. And like those judging from afar, Northeast Florida surfers are wary of the repercussions.

“I’m still torn on where I stand,” Thompson says. “I just hope we don’t screw this up.”