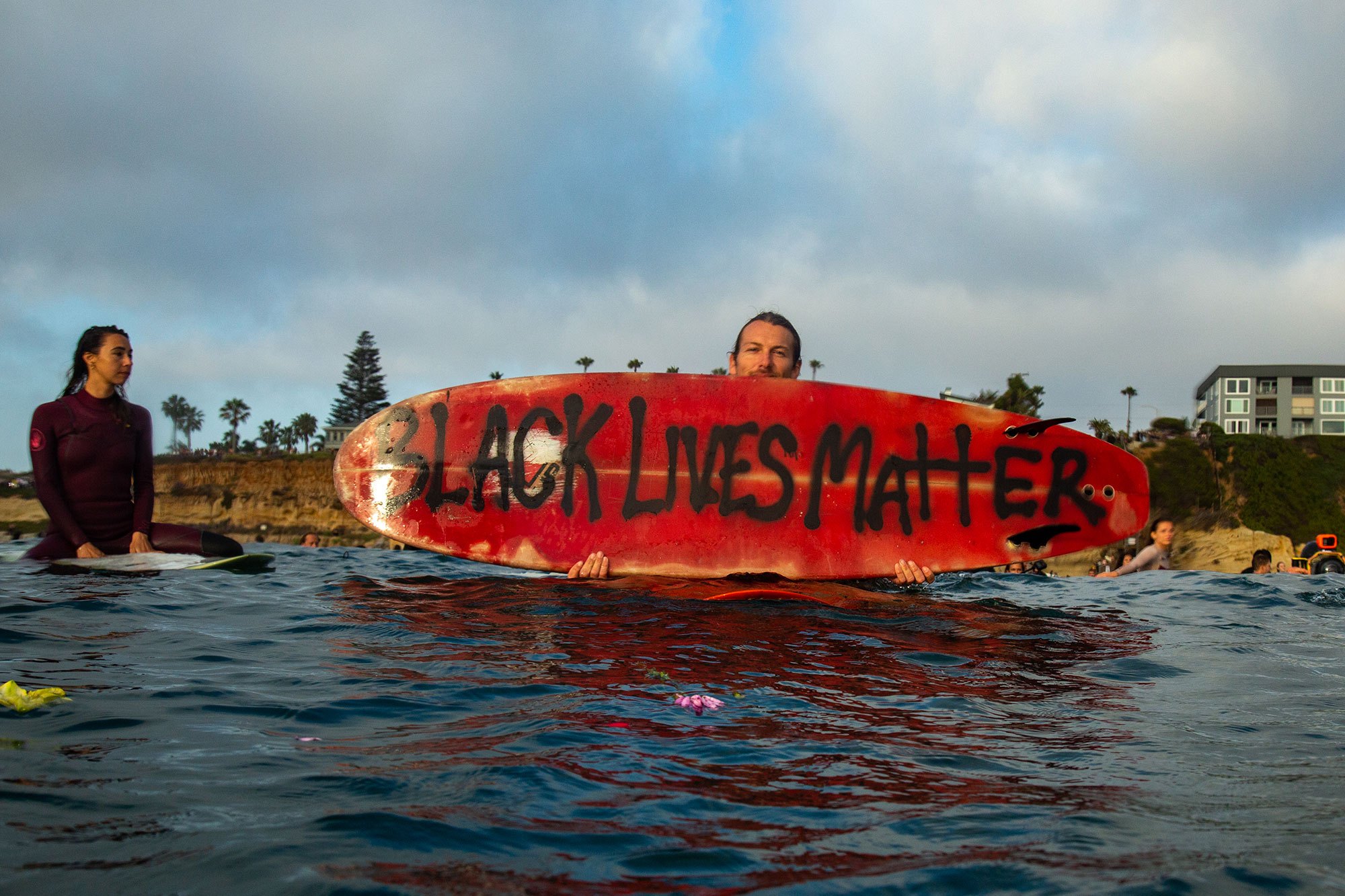 It’s been a week unlike any other I can remember in surfing — one where the biggest surf story hasn’t been a swell event, some pro’s new video part, or a live World Tour event (believe it or not, in an alternate reality, we’d all be glued to the Quik Pro G-Land right now). No, the biggest surf story has been thousands of wave riders around the world paddling out as a show of support for Black Lives Matter and to honor George Floyd and countless other victims of America’s racist law enforcement and criminal justice systems.

As far as we know, Floyd — as well as Breonna Taylor, Ahmaud Arbery and other Black Americans who have been tragically murdered by police or vigilantes in recent weeks — didn’t surf. There isn’t an overt connection between these cases and surfing, but the cumulative national trauma of their deaths and the injustice it exposed touched every person in this country, which of course includes surfers. Many of us have been reckoning with this moment in a way that is familiar to us: by participating in the kind of ritual paddle outs typically used to mourn loss and celebrate life. From Encinitas to Montauk, Nantucket to Waimea, surfers mourned these tragic deaths while also standing up for racial justice in America. This is a unique moment in surfing not just because these paddle outs represent something larger than a simple celebration of life, but also because more surfers have now likely paddled out for this cause than perhaps any other in the history of the paddle-out ritual. Think about that for a second.

Seeing it occur both in person at the Encinitas “Paddle Out For Unity” and elsewhere online, it struck me just how unusual it is to see surfers stand in solidarity for anything. Beyond our penchant for riding waves, there aren’t many things you can predict about the actions of surfers. Most of the time, we don’t behave as a collective. Politically, we fall all across the spectrum from Bernie bros to MAGA hatters — although “not into politics” is a depressingly common refrain among surfy types, which betrays an incredible privilege that comes with being a white coastal suburbanite in America. Many of us don’t have to pay attention to these things because our safety and prosperity have mostly been a given. A group unified by any kind of underlying beliefs or ideologies or general world view, we are not.

A recent exception to the rule was Australia’s mighty Fight for the Bight campaign, which saw thousands of surfers paddling out around the country in protest of a proposed oil-drilling operation off their southern coast and ended with foreign oil company Equinor retreating to Norway with its tail between its legs. But in America, you’d probably have to go all the way back to the Vietnam War to see examples of many thousands of surfers participating in a protest movement.

In spite of this general lack of activism and social/political dialogue over the past few decades in American surf culture, some surfers have managed to claim that surfing is “anti-establishment” or “counterculture” with a straight face. The tagline of one of our biggest-ever surfwear brands, Volcom, was “Youth Against Establishment” until 2014, when they must have realized how ridiculous it sounded coming from a brand that was owned by a publicly-traded, French luxury-wear company.

Even the apolitical concept of a rebellious surfing lifestyle — originally defined by surfers like the hedonistic, self-serving, known-racist Miki Dora — that forgoes a conventional career and 9-to-5 job in favor of an endless wave chase has mostly vanished. Instead, the high cost of living in coastal enclaves has pushed financial-fringe dwellers inland, and ever-rising property values have added to the generational wealth of families who bought up the coast early. Now you have to hold down a well-paying job to afford to live by the coast, or be part of the trust-fund class of surfers who can surf all day without making any real sacrifices to do so — not much rebellion in that. But corporate surf brands and many surfers still like to think that there’s something counterculture and anti-establishment about surfing. There isn’t. Or at least there hasn’t been for a long time.

A surfer at the Encinitas paddle out last week.

Right now, there’s a revolution happening in America, and for the first time in a generation, surfers seem to be collectively moved by a cause. It is not our cause as surfers any more than its anyone else’s, and most surfers are new to the fight for racial justice. But it’s the cause of humanity to fight racism, and we too are getting swept up in the wave of resistance. How could we not, given what we’ve seen over the past few weeks, from the unspeakable police brutality that ended George Floyd’s life to the unimaginably-widespread police brutality against protesters documented on social media in the aftermath?

Over the past week, it’s been heartening to see thousands of surfers taking a stand by doing the thing we are comfortable with — paddling out. But it’s been much more so to see the fewer, but still substantial, number of surfers doing what is unfamiliar and uncomfortable: Confronting their privilege as mostly white coastal residents who haven’t suffered at the hands of a racist system, pledging to listen to Black voices and educate themselves on systemic racism, donating to and fundraising for organizations for racial justice, and even taking to the streets to participate in the protests around the country.

Last Thursday in San Diego, about halfway through a nearly 10-mile march led by black youth organizers, I noticed a surfboard Sharpie’d with “NO JUSTICE, NO PEACE” sticking out from the sea of thousands of protesters. As terrible an idea as it is to use a heavy foam-and-fiberglass surfboard as your protest sign for a 10-mile march, it was nice to be reminded that surfers were stepping outside of their comfort zones and participating in this revolution. That the embers of our culture’s long-burned-out, anti-establishment fire appear to be rekindling.

Time will tell for certain. It’s been 2 weeks since George Floyd’s murder and the protest movement for racial justice seems to be growing, with some of the largest demonstrations yet over the weekend. And while symbolic gatherings like protests and paddle outs are important, they only represent a small part of the work that needs to be done to dismantle racist systems in America. Calling into city council meetings about diverting police funding to community-based assistance programs isn’t sexy or fun or performative. It doesn’t make for good Instagram fodder.

A sincere self-interrogation of how white privilege has helped so many of us is even more difficult. But my hope is that the widespread paddle outs in support of Black Lives Matter are not just performative — not just for clout and likes. Perhaps paddle outs can be a kind of gateway, and more surfers can take whatever “rebellion of spirit” we’ve claimed in the past and channel that into a true anti-establishment movement. And there’s never been a better reason to do it. If one thing has become crystal clear in the past few weeks, it’s that there is no establishment in greater need of a takedown than the racist institutions of America.