NYC Surfers Will Paddle Out For Racial Justice This Saturday 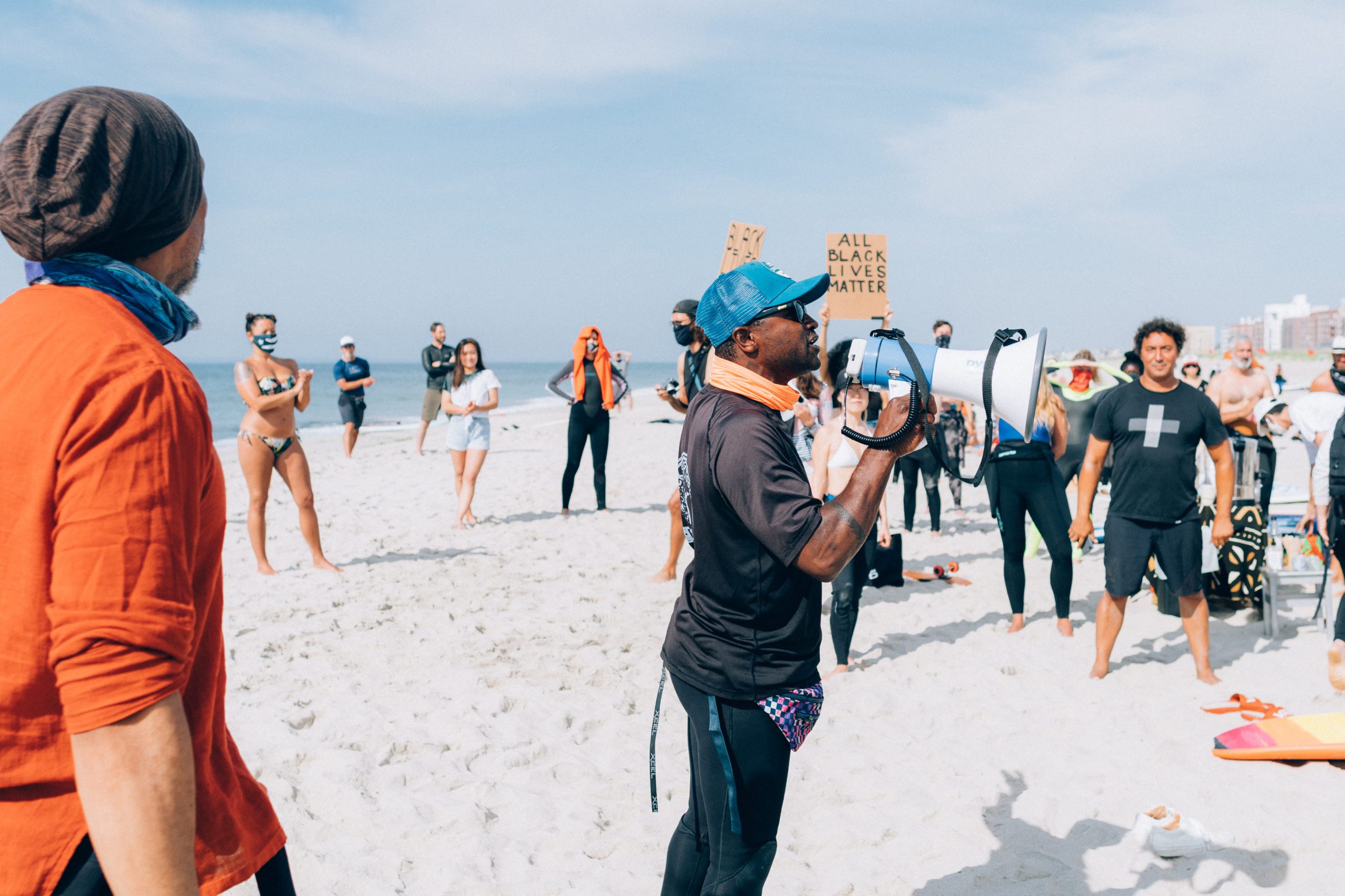 On June 5, in the wake of George Floyd’s murder, hundreds of people paddled out at Beach 109th Street in Rockaway, Queens in New York City to show support for Black Lives Matter, to protest police brutality and to honor the victims of racial violence across the country.

The demonstration — which saw roughly 350 attendees and camera crews from CNN, BET and a slew of local news stations — was organized by Lou Harris, the founder of the Black Surfing Association’s (BSA) East Coast Chapter, a nonprofit organization focused on providing inner-city youth with opportunities to learn about surfing, skateboarding and living an active, healthy lifestyle.

While many news outlets and social media feeds have lessened their focus on the racial justice movement in the months since, Harris and co. have kept a steadfast commitment to the cause since that first paddle out (holding two more paddle outs since), and will be leading another paddling out with New York’s surfing community this Saturday, August 22 at Beach 73rd Street at 9 a.m.

Earlier this week, we hopped on the phone with Harris to learn more about the Black Surfing Association, their mission to help local youth access and learn about the ocean, and the importance of the paddle outs for the Rockaway community.

How and when did you start surfing?

I started surfing about 15 years ago. I skateboarded for about 25 years and I got to my late 30’s — 38 or 39 — and my body started breaking down. I was living in Harlem at the time and started going back to Rockaway, where our parents took us as kids, and I fell back in love with the ocean and taught myself how to surf.

When did you start the East Coast chapter of the BSA?

About 4 years ago there was a tragedy in Coney Island. Two police officers responded to a fire, and one of the police officers died. When they found out who started the fire and they asked him why he did it, he said that he was bored. If this kid had been busy, the officer would be alive.

I was raised on Long Island and I stayed busy doing BMX, taking karate lessons, swimming lessons. So I reached out to Tony Corley [founder of the Black Surfing Association, based on the West Coast] on Facebook and we became friends for a while before I asked him if I could start an East Coast chapter. He offered me $500 to get started, but when I got the check it was $1,500.

I just want to give the kids the same opportunity that I had. I work nights just so I can work with the kids. I’m an overnight doorman, or porter, on the Upper East Side. I work from 12 at night to 9 in the morning, I get to Rockaway at 10:45 a.m. and I get home at 2:00 p.m., get to bed, get back up and go to work at night and do the same thing all over again.

Can you tell us a little about BSA’s mission and the work you do?

It’s all about giving kids the opportunity to surf for free. We also give free skateboarding lessons and cooking classes. We just want to keep kids busy and active and spread the message, going into schools and talking to kids about water safety and all that. I kind of want to change the narrative. When you talk to kids here at Rockaway, they think of a surfer as John John Florence. When I say, “Hey, I’m a surfer,” they’re shocked. We’re trying to reach every kid, but we’re really trying to reach the kids that don’t get the opportunity to surf — the kids who have a single mom, the latchkey kids, the kids that count themselves out.

I went to the surf shop here at Rockaway at 116th Street and bought a bunch of foam tops. I gave them to the kids for free. There was a kid here in Rockaway, about 10 years old, and he was riding this little 6-foot board to learn. It was his birthday and he was killing it. At the end of the lesson, I said, “It’s your birthday. You earned it.” That kid is going to pass that along. Not the board, per se, but what I showed him. That right there changed that kid’s life. Every time I see that kid, he’s ripping now. 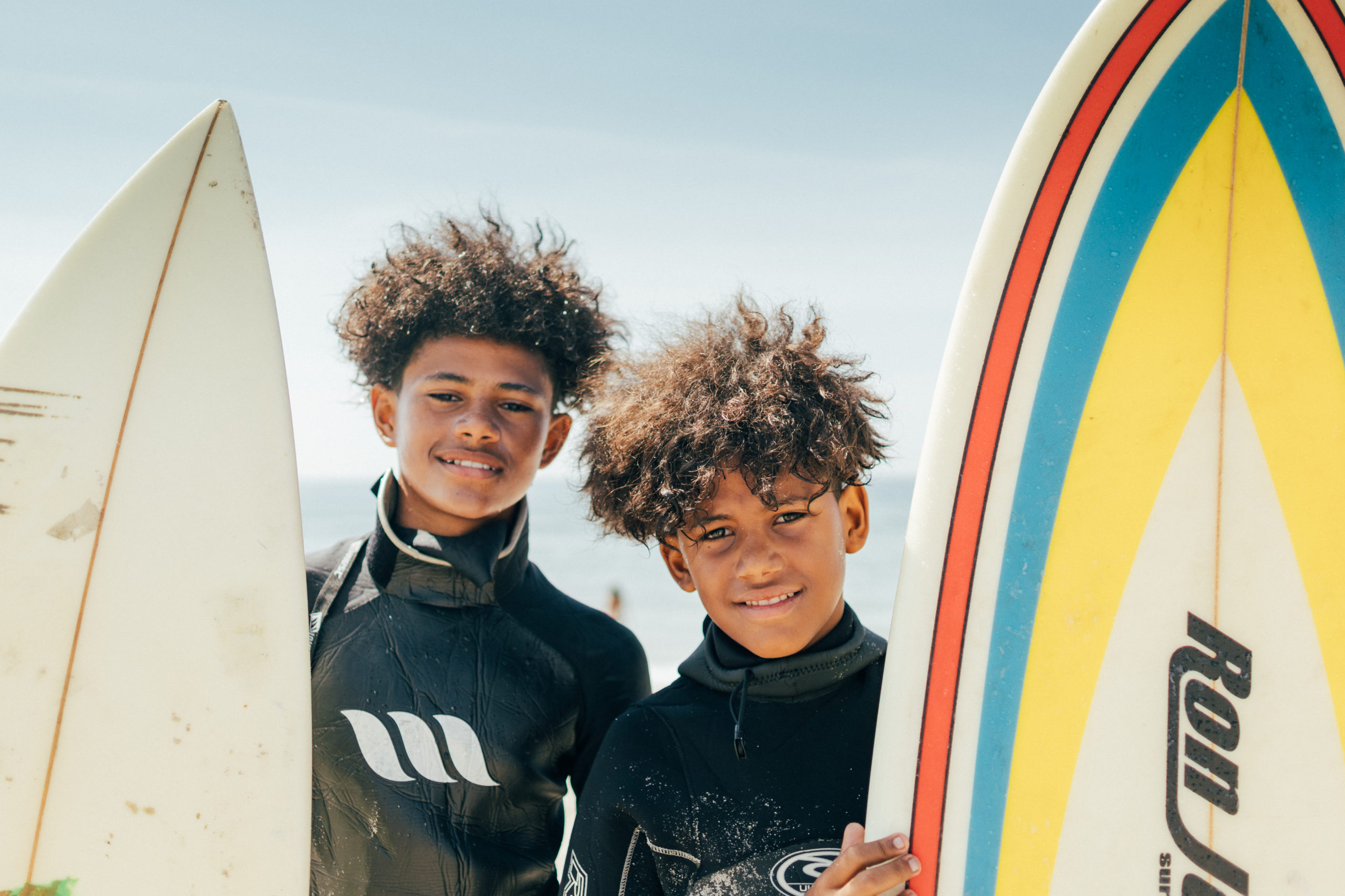 According to Harris, the surf community rallied together in the form of a powerful demonstration on June 5th

What are some of the things you teach in the program?

I work in schools. I teach the kids about rip tides and water safety. I’ll teach them how to spot a riptide, how to get out of one. We also work closely with restaurants in the community to do free cooking classes. My whole thing is keeping kids busy and active. Thank god, I had a mother and a father. A lot of kids here at Rockaway, they don’t have that luxury. A lot of these kids have single parents. When I give these kids free shoes, free surfboards, free wetsuits — whatever it is, I want these kids to have the same kind of lifestyle. I get a lot of kids from the hood. These kids are the ones that come to my program, and they rip! These are the kids that you’d think would be playing basketball, football. They’re calling me at 7 o’clock in the morning asking, “How’s the surf today?” These are the kids that I’m trying to reach. I don’t care if you’re white, Black, Asian, whatever. They’re all friends here in the lineup together.

What are some of the positive effects you’ve seen the program have on these kids?

Kids noticing the riptides. Seventy-five percent of youth drownings are African-American kids. Last year, here at Rockaway we had at least 7 drownings. I remember when I first moved here 15 years ago, I’d see a lot of helicopters. I’d say, “What’s that about?” And I’d hear that sometimes it was a shark, but usually someone had drowned. There was a kid that drowned here 4 years ago, on Beach 69th Street. I was doing my lessons on 114th and that kid’s body bumped right into me. I took the kid out of the water and I didn’t do lessons for a good 2 months after that.

But I’ve had kids come up to me and say, “Mr. Lou, I showed my friend what a riptide was.” What I’m teaching these kids is going to last a lifetime.

The first paddle out you organized drew over 350 people to the beach to honor those who lost their lives to systemic racism. How impactful was it see so many people in the surf world paddle out for this?

Paddling out that morning, it was like church, a football game and a rock concert all rolled into one. People were crying, yelling. You could tell there were real protesters in that crowd.

How was it seeing the Rockaway surf community rally for that?

The surf community in Rockaway? Of course, they’re going to rally. We don’t have any racism in the water. The only thing people beef about is dropping in and stealing waves. We don’t do that racist crap. It doesn’t matter what color you are. Rockaway’s always been cool. 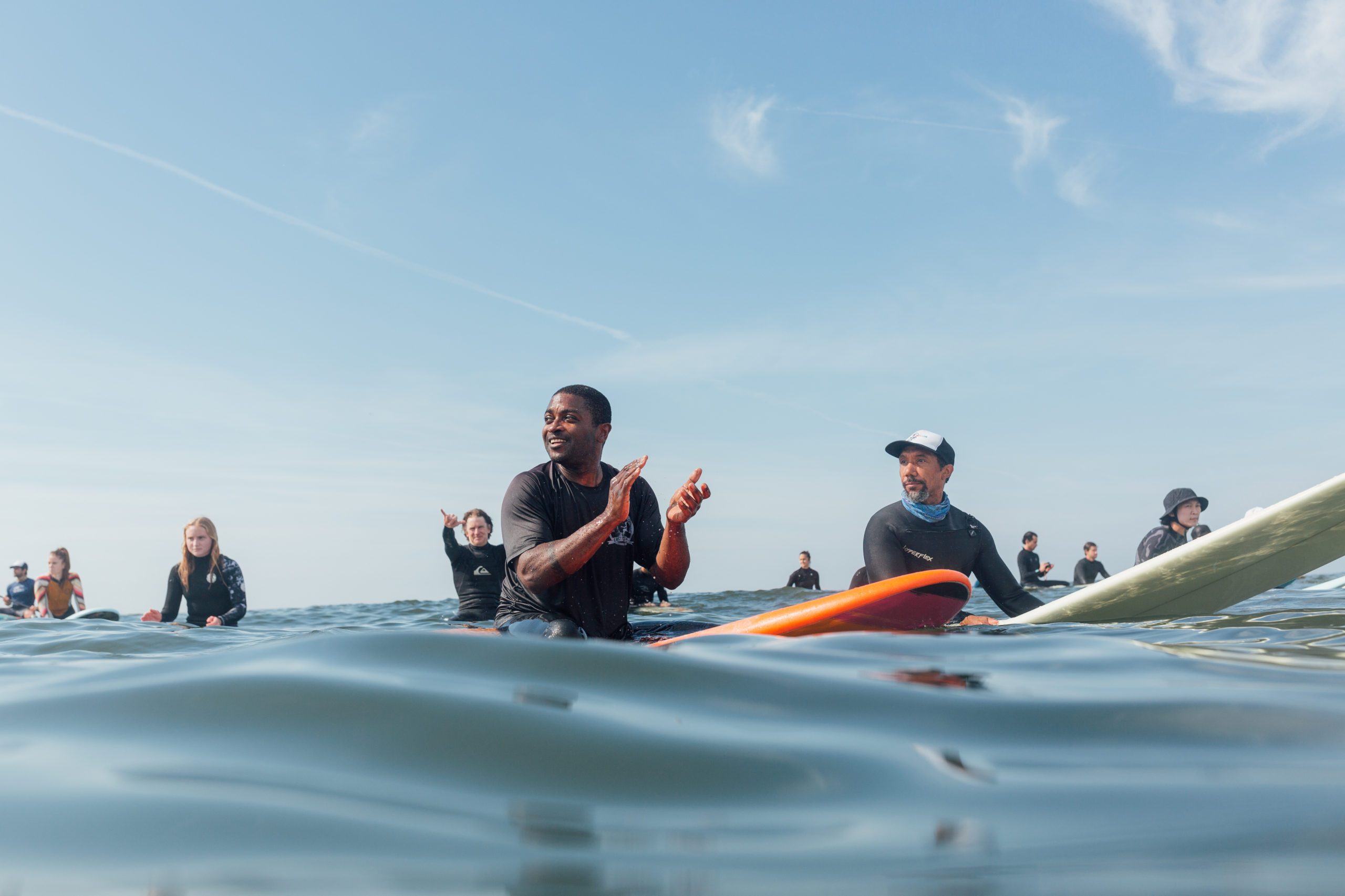 Harris (left) will be organizing another paddle out this Saturday, the 22nd at Beach 73rd

You’re organizing another paddle out for this Saturday, August 22. What kind of turnout do you expect to see this time around?

I’m thinking about 300 people will show up. We have some people coming in from Atlanta with ice cream, called Mokipops, and I have my buddy from Brooklyn giving out free coffee from Head Hi Bookshop Café.

The last event was actually an 8-block paddle for George Floyd, who couldn’t breathe for 8 minutes and 45 seconds. This one will be a 13-block paddle for Breonna Taylor, who died on March 13.

The NYPD have posted bulletins that they’re organizing a paddle out at the same time and place on Saturday. What’s that about?

They’re doing that to bust our balls. The cops have been there, they know exactly what block I’m doing it on. They do it the same day and the same break that I do. [Ed’s note: police boats had been present at previous paddle outs in support of the BSA and as safety responders, according to Harris.]

The Rockaway surfers, those are the real protesters. I had people hitting me up saying, “Lou, what are you gonna do about it?” I told them, “Let’s keep it nice and peaceful and nonviolent. We’re doing this for a cause. This is a movement”.

What can surfers do to show support for racial justice and also to support diversity in the lineup?

Just don’t judge Black surfers that are new to your break. Go and encourage them. Your first day of surfing, if you don’t catch waves, you’re not going to have fun. A bad first experience can ruin surfing for you. I had this kid get hit in the head and triedB to get out of the water once, and I said, ‘no’. His father thanked me. That kid went out and surfed two hours after that.

My little brother died of cancer and surfing here in Rockaway got me through that. I want kids to have that escape. It’s therapeutic. It’s fun. You lose yourself when you get into the waves.

[To learn more about the Black Surfing Association’s East Coast chapter, follow them on Instagram. To support their work, visit their GoFundMe page.]