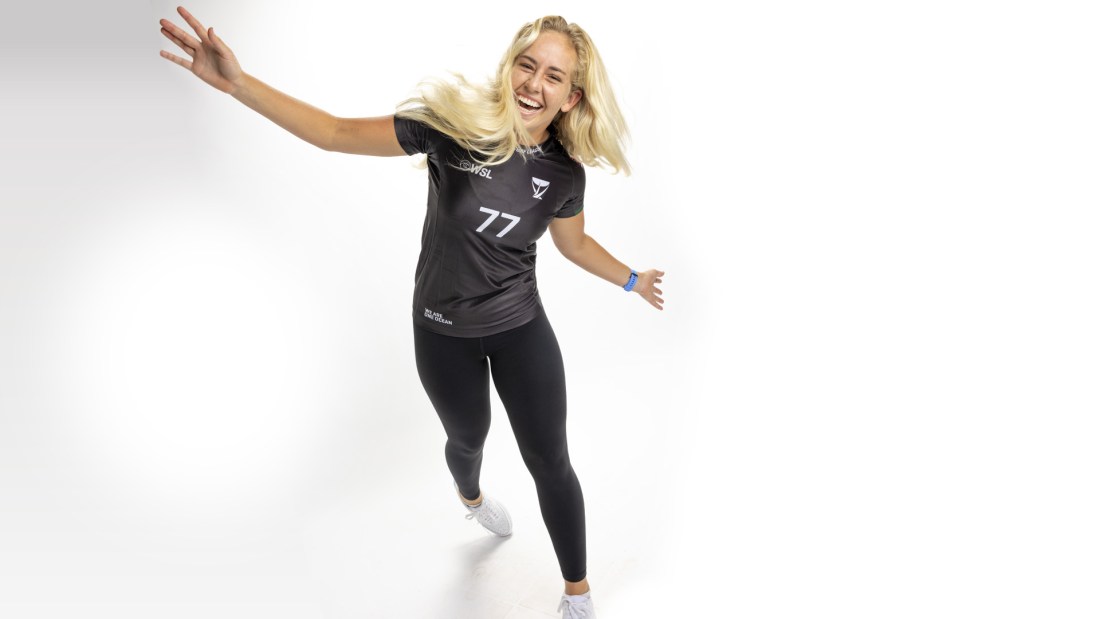 For Gabriela Bryan, surfing has always been a family affair. Bryan spent her childhood on Kauai’s north shore and her dad took her surfing for the first time when she was just four years old. Growing up, Bryan would regularly surf with her family and occasionally competed in kid’s competitions for fun.

By the time she was ten, Bryan began taking surfing more seriously. She started competing regularly in junior contests and by the time she was fifteen, she knew that she wanted to be a professional surfer. In 2021, Bryan won the Challenger Series securing her spot on the 2022 Championship Tour.

“It was super cool to have the feeling that I accomplished one of my dreams, something that I worked really hard towards,” says Bryan of qualifying for the CT. “It was super special, especially for everyone that’s helped me get to the CT and supported me. I felt like it was an accomplishment for a lot of people.”

Heading into her rookie season, Bryan had mixed emotions. Naturally, she had some nerves, but for the most part, she was excited. She was ready to show the world her surfing and give it her all. With the introduction of the mid-season cut, the rookies were thrown into the lion’s den from day one, with no time to warm up and get their bearings.

“There’s so much natural talent out there and top ten is something that’s really hard to accomplish,” says Bryan. “With the mid-year cut in place it didn’t really give us rookies a chance to find our footing. There was no easing into it—it was just all in or you’re out.”

From day one, Bryan gave it her all and was especially proud of making the final at the Sunset Beach Pro, ultimately securing a third-place finish. Heading into the Margaret River Pro, Bryan sat at the cusp of the cut line and needed to make the final in order to make the cut. Luckily, she brought her A-game and was the only rookie to make it past the mid-season cut.

“I was really proud of how I kept my composure—I had a goal and I did everything I could to achieve that goal,” says Bryan. “Making the cut was really exciting and it was a big relief because the whole back half of the year I didn’t have the pressure of losing my spot.”

Bryan ultimately rounded out the season in ninth place and was awarded ‘rookie of the year’ by the WSL. She attributes her success to the hard work she puts in and the community that backs her. Bryan also has a solid quiver under her feet that allows her to perform her absolute best.

“My whole quiver is shaped by Matt Biolos,” Bryan says. “I think it’s important to have a shaper that you have a lot of trust in. Matt puts so much time into my boards and I’m grateful for all his support.”

With her rookie season done and dusted, Bryan has had some time to breath and reflect on the season. She’s proud of her performance and learned a lot from her first year. The tour is intense and involves a lot of travel, so Bryan learned to adapt to life on the road. All the competitors on tour are fierce in their pursuit of a world title, so Bryan learned to not take anything lightly and to always do the best that she can—as long as she works hard and gives her all, Bryan is happy with her results.

“Enjoy every moment,” Bryan says as a word of advice to next year’s class of rookies. “It’s super special to be surrounded by some of the best surfers in the world, so learn as much as you can. There’s so much inspiration around you when you’re a part of the CT, so soak up every moment of it and do your best to show the world what you’ve got.”

Looking forward, Bryan’s goal for next season is to make the final five. She’d also like to win a CT event and eventually, win a world title. Bryan is also fighting for a chance to represent the United States and Hawai’i at the Olympics with the goal of securing a medal. Though Bryan has lofty goals, she’s willing to put in the work it takes to achieve them.

“I just want to say thank you to everyone that’s supported me and helped me get to where I am” says Bryan. “I would not be here without everyone and the whole entire community behind me that has pushed me and believed in me since the very beginning. I’m always striving for the best and I’m going to do everything I can to achieve my goals.”