San Diego Board Builders Say They Can Work Safely, If Given The Chance 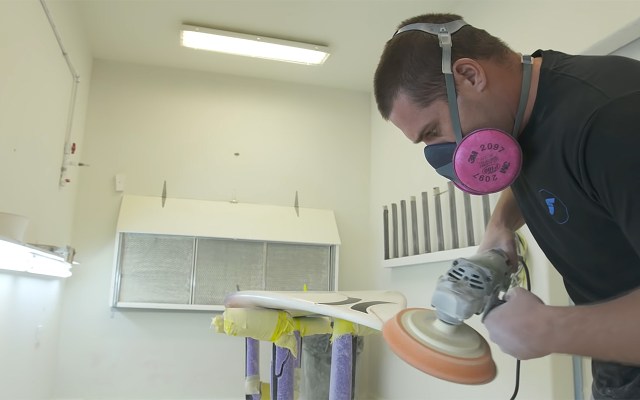 On Monday, Jojo Roper issued a public appeal to the City of San Diego on Instagram: “Our shop @joeropersrepairs has now been closed for over a month due to Covid 19,” he wrote. “Surfing is second for me at the moment as my focus is more on opening up businesses that can properly social distance and keep a safe work environment.” Roper called on the City of San Diego to “please consider letting up a little before all of the local small businesses start to drown… If we can make it safe, let it roll.”

Roper’s father, Joe Roper, opened Joe Roper’s Surfboard Repair, a board repair and glassing facility, 45 years ago in the Kearny Mesa area of San Diego. The day that Governor Gavin Newsom issued statewide stay-at-home orders was one unlike any other his business had experienced. “All of a sudden it was like, ‘everybody shut down tomorrow,’” says the younger Roper. They told their employees all at once that they would be furloughed until further notice, and should gather their things and go home. “It’s hard to tell your guys that … they were all pretty shocked, everybody wanted to work, but we literally had to shut down.” Except for closing for Christmas each year, and for an annual surf trip to the North Shore throughout the ‘70s and ‘80s, Jojo’s father had never closed down his shop.

“Safety is first, and at the end of the day, as long as everyone is healthy, that’s all that really matters,” says Jojo. “We know it’s a real thing and we have to be sensitive to it all, there are people dying.” Six weeks after shutting down, however, Jojo struggles with how detrimental it is for the health of employees to go without work for this long. “People who [survive] paycheck to paycheck don’t know where their money is going to come from next month. That’s going to drive their health lower than anything, the stress of that.” To date, the unemployment rate in San Diego County, where the Ropers’ shop is located, is almost 25 percent.

Roper is appealing to San Diego city and county officials to let his father’s business of 45 years reopen.

The day after Jojo’s Instagram post, Newsom announced a four-stage approach to reopening California. According to the governor, California is currently in Stage One, in which everyone except “non-essential” workers is being asked to stay home as much as possible and to implement social distancing practices in public.

Stage Two sees a loosening of these restrictions, “creating opportunities for lower-risk sectors to adapt and re-open,” including retail businesses that can implement curbside pickup, manufacturing facilities, and offices where telework is not possible.

But while Newsom’s plan clearly lays out what public-health requirements are necessary to enter Stage Two — such as sufficient hospital surge capacity, PPE, and testing capacity — the start date for Stage Two, and how businesses will be deemed “lower risk,” is much more nebulous. On Tuesday, Newsom said some businesses might be “weeks, not months away” from reopening, but he made a point not to declare how many weeks that meant, and on Friday he revised that statement to say that California is “many days, not weeks” away from some changes to the stay-at-home order, but did not specify what changes he meant.

It is left to county officials to enforce the guidelines, or enact more stringent guidelines as they see fit. Counties do not currently have the authority to enact more relaxed guidelines than those set by the governor. On April 23, Roper e-mailed a handful of San Diego city council members and officials.

“I’m writing to ask for your assistance, as well as offer my help, in discussing next steps for small businesses – who are not deemed ‘essential’ but can safely operate under COVID-19 conditions – to reopen. I am a small business owner in District 6 who runs a repair shop on Vickers St.

There are many businesses in our community who can safely open without significant to almost no interaction with the public. Business repair shops such as mine, which is owner/family-run, is one such business. Customers can place repair orders over the phone, drop off items, and family-run business employees can follow COVID-19 protocols to safely work. Repair orders can then be picked up without interaction with the public.

After Jojo’s Instagram post this week, Coronado Mayor Richard Bailey reached out to him. Bailey is forming a coalition of San Diego County businesses to present a petition in favor of reopening all small businesses as soon as possible with established safety protocols. He plans to present the petition at the San Diego County Board of Supervisors meeting scheduled for May 5th.

“We’re calling for the county to request permission from the state to move ahead independently of the state, or at the very least give clear guidance that all businesses will be allowed to open on a certain date so long as clear guidelines are being met by those businesses,” says Bailey.

While abiding by most safety guidelines is almost completely inherent to surfboard building and repair businesses, Roper acknowledges that some adjustments would have to be made to their customer service in order to be fully compliant.

“Surfboard factories, we wear a mask all day long, we have all the necessary hand sanitizer, gloves, anything anyone could want to be safe we have,” he says. But as a repair and glassing shop, customers come in and out of the building to drop off boards. Roper says this issue is easily addressed with minor adjustments. “We have a big parking lot. If we had a line of people in our parking lot, they’re holding 6-10 foot surfboards, so even if they wanted to get close to each other they can’t. We could have people line up 6 feet apart, or we could even have a drive-through service and take the board off the roof, or you could just put the board on our rolling racks, leave your name and phone number on it and keep on moving…easier than [buying a] coffee.”

When California businesses were first ordered to shutter, only those deemed “essential” were exempted, and while the line of demarcation between essential and not seemed to take a winding path that somehow included ice cream shops and liquor stores, it would have been difficult at that time to argue that surfboards were essential. The classification was meant to describe suppliers of basic means of survival, like food and medicine. But with the slow rollout of stimulus checks and unemployment benefits, business owners like Roper see the wellbeing of their employees as the emerging definition of essential. “My main job is surfing and our shop is part-time for me,” says Roper. “But the surfing ban has been going for however long and I don’t even care about surfing, I want people’s small businesses to open, those are people’s livelihoods.”

Roper has signed Mayor Bailey’s petition calling for the widespread and prompt reopening of San Diego businesses. Bailey says he at least hopes to achieve more clarity for businesses like the Ropers’ as to what lies ahead, as well as a consistent policy that can apply to all small businesses, and not tie their chances of economic survival to what stage they are assigned.

“There’s this old saying in politics that if you’re not at the table, you’re on the menu,” says Bailey. “There is no real mechanism for businesses like Jojo’s to petition the government and say, ‘My business is not a threat.’ The only way for people like Jojo and his employees to speak out is to become part of a bigger movement.” 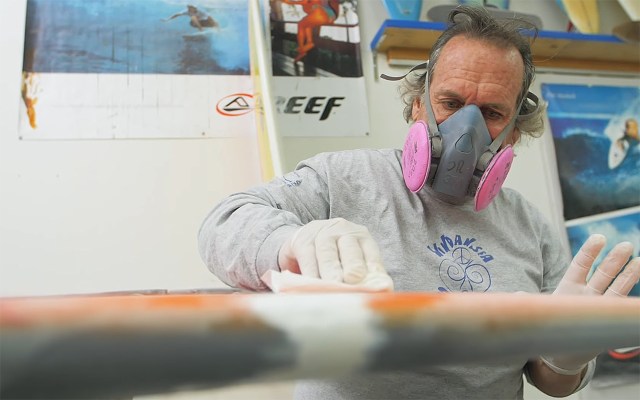 Joe Roper at work before the Covid-19 shutdown. It’s been strange for him not go to the shop every morning, according to his son.

Some shapers are already operating clandestinely, shielding themselves in the justification that building or repairing a surfboard is organically a socially distant activity. Two surfboard business owners in San Diego that spoke on the condition of anonymity confirmed this, and both cited their primary reason for doing so as being that the prospect of laying off their employees was too agonizing.

“Social distancing was invented in a surfboard factory,” one business owner told us. “Psychologically, unemployment will crush these guys and for some of them, unemployment will end their careers.” They gave their employees the choice to either keep working, or to be furloughed with the promise of being rehired when they could officially reopen. All but one employee chose to stay on the job. The individual who chose unemployment was over the age of 70 and cited his wife’s concerns for his health. His employer doubts he will return, after having worked in this industry for decades.

Another board business owner echoed those sentiments. “If you could define a safe working environment, I think a surfboard factory would be it,” they said. “The stimulus isn’t enough, it’s not getting to people fast enough. Whatever we can do to get people back to work is going to help…a lot of people aren’t going to come back from this.”

For this owner, who estimates they lost at least 50 percent of their revenue through the closure of surf shops around the world who function as their wholesale accounts, the largest frustration is the lack of available information on when official reopening might occur and how they will know whether their business qualifies. “You can’t find out any information, or what department to call, or what the next step is and when the next step is.” They plan to join Mayor Bailey’s petition to the County Board of Supervisors.

Back at Joe Roper’s Surfboard Repair, Jojo says his next step is to put together a proposal of what can be done to keep his family’s shop safe, and try to find the right official to whom he can make his case. Jojo says his father has spent a lot of his time going through the 45 years of surf memorabilia that hang from the walls and fill the upstairs of his now quiet shop. But he says it’s still strange for his dad not to wake up every morning and go to work. “This is his baby,” says Jojo. “He grew it from the ground up.”