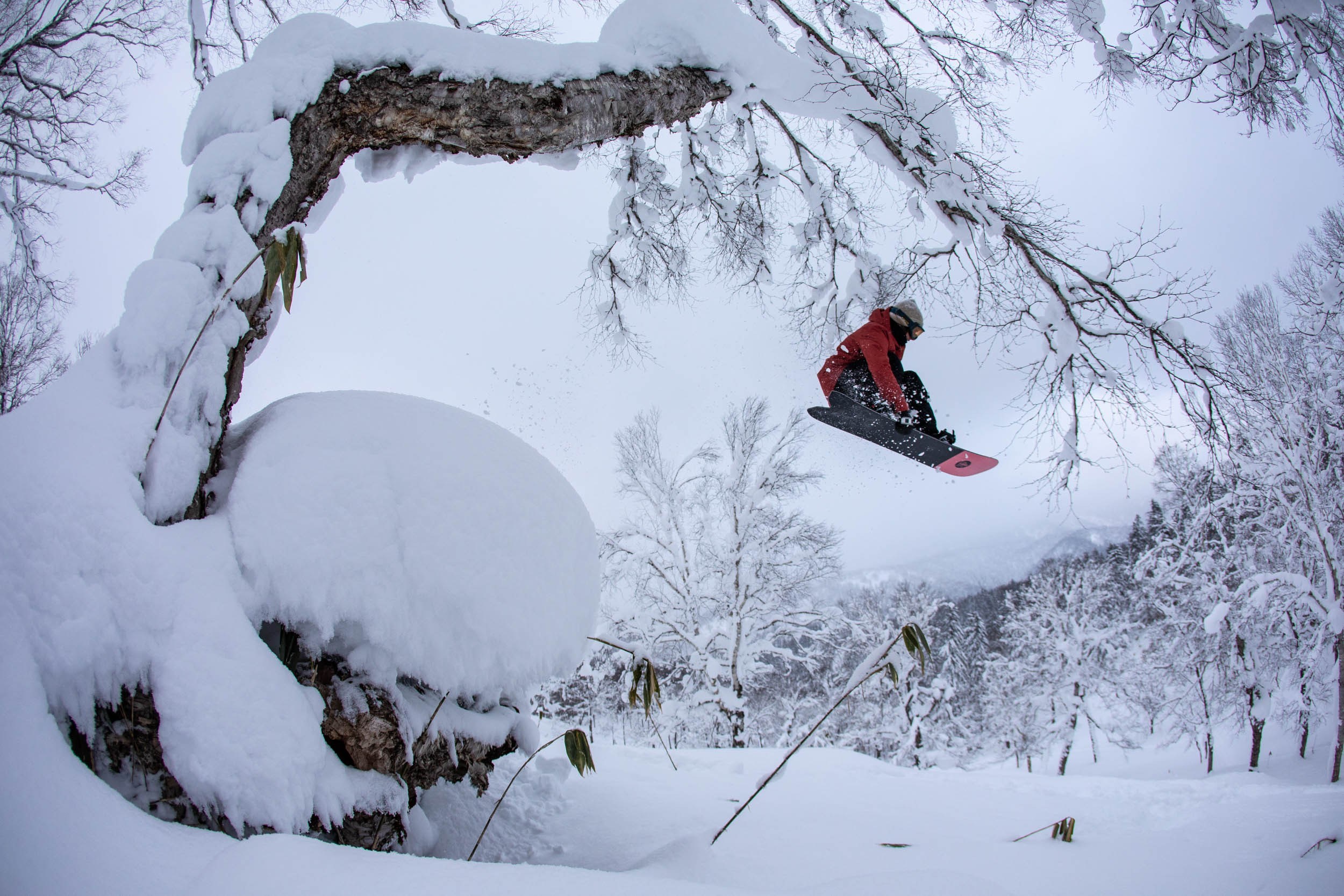 When traveling, I generally feel that you’re in the right place when you check into your hotel and the front desk staff look at you like you came from outer space. It’s not that they aren’t happy to see you or courteous as they manage your reservation, but it’s very clear that they are really surprised you somehow discovered their establishment. That’s the kind of place where you want to be. Bonus points if all the guests meandering through the lobby are in matching yukatas and there’s a complimentary nightly snack that most definitely contains octopus. Then you really know you’re in the right place

It was an unusually slow start to winter in Japan last January. Early winter is generally unbelievably consistent on Hokkaido, which is why it is such a beloved destination for snowboarders of all stripes (of course, the incredible culture and the soup curry don’t hurt, either), but in 2020, the snow was scarce. I had headed over to the Niseko area with Christine Savage, Nial Romanek, Kelsey Boyer, and Jen and Christina Chang for a Beyond the Boundaries Women’s Camp trip, and while for most anywhere else in the world at the time of year the precip would amount to good coverage, for Japan, it was low tide. The first day on hill at a small local resort, we bushwhacked through bamboo that was overhead height—usually the stalks are so buried that they stick just a few inches out of the ground. We were able to find some goods during the week of camp, but we hit a high-pressure system once it wrapped and the forecast was clear.

We linked up with Jess Kimura and her filmer Chris Parton, who were stranded in Niseko and like us, in search of snow. It was clear we were going to have to veer off the beaten path to find some stashes. So we headed east, driving further into the mountains of Hokkaido until we found a promising zone that was holding snow. It was there we discovered the traditional Japanese hotel of our collective dreams: ryokan-style rooms, sprawling indoor and outdoor onsen, breakfast and dinner buffets with every Japanese delicacy you could imagine, a 7-11 directly across the street—and pretty easy access to the area we wanted to explore. Everything we needed was right out our hotel room doors—this was key because each day we spent hours Verting around in the woods in deep snow to find spots, hit said spots, and hike back out. By the time we’d pile in the Hiace and drive home, we were all worked, so never having to leave our lodging to figure out food or anything else made things so easy—plus it was a particularly cold week in Japan, so it was extra nice to not having to go outside.

Each day was a bit like Groundhog Day, but we relished it. 7am breakfast with tons of coffee. Stop at 7-11 and get pocket snacks for lunch—shout out to KBoy who brought natto on hill and dove straight into the acquired taste of fermented soybeans. Drive to the zone, hike around, snowboard, hike some more, get cold, warm up, and repeat until dark. Head back to the hotel, meet at the buffet, go onsen, and pass out. Then we found the nightly BINGO game. 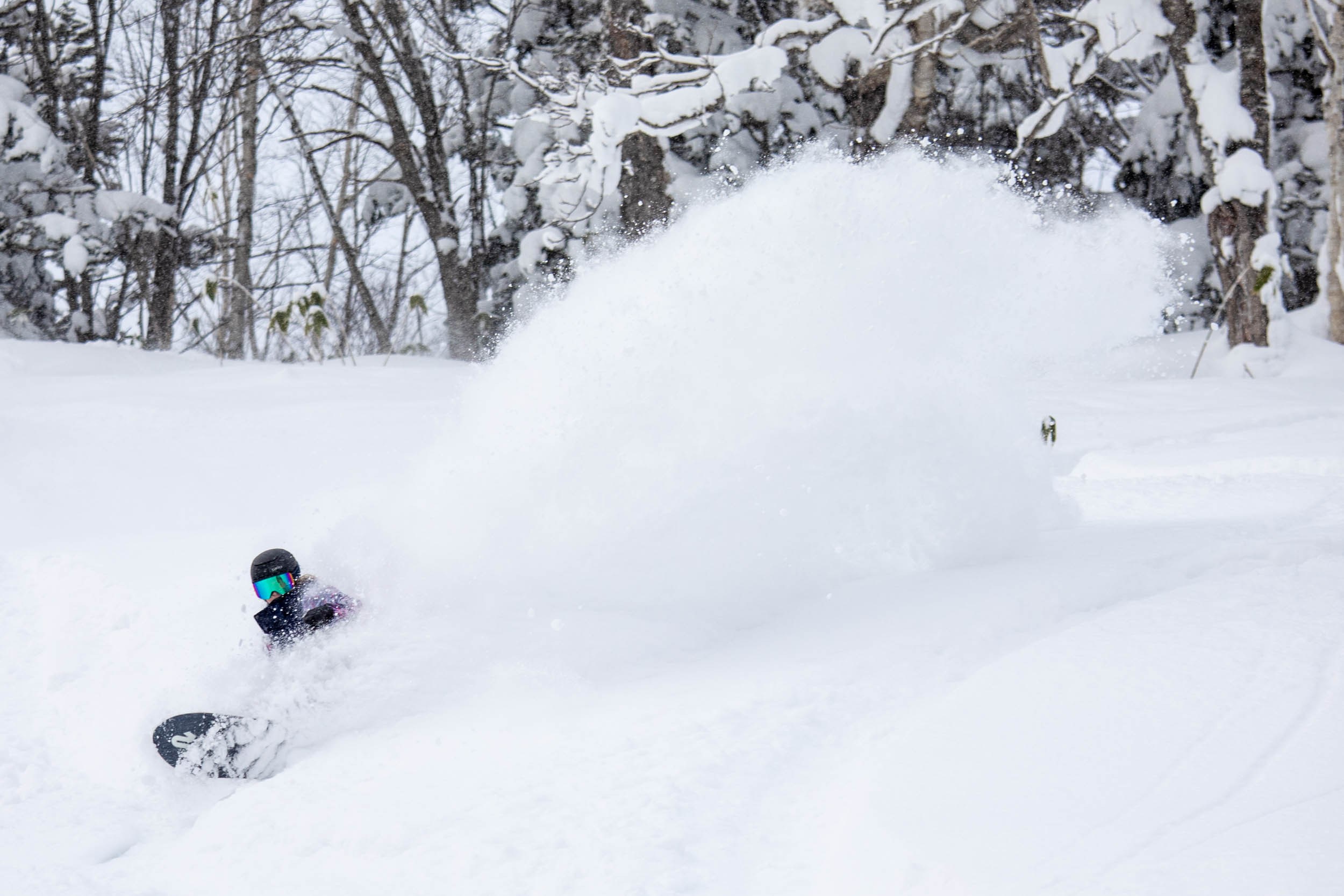 We definitely stuck out pretty aggressively at the hotel. Collectively, we have just enough Japanese down to get by, profusely saying “arigato gozaimasu” (thank you) and “sumimasen“ (sorry) in equal measure to show our appreciation and our apologies for our lack of language fluency. Every night at dinner, servers would bring over some interesting treat that it seemed no one else received—the night they dropped off giant crab legs, we figured they were just wondering how long, exactly, we planned to stay. Oh, but the BINGO. Every night after dinner, you could pay 500 Yen—about five dollars USD—to play in the hotel lobby. There was a host with a mic, a bunch of chairs set up that were always filled with families, and a grip of prizes from the hotel’s gift store. To say we were excited when we saw this the first night would be a heavy understatement. We cashed in that week, winning packages of udon noodles and bottles of local sake.

Of course, the snowboarding was just as fruitful. Jess and Nial led our crew in the woods, finding features and providing guidance. For a challenging snow situation, we came away stoked. The day we checked out of the resort, it was sad to leave the routine, though we were excited for something different for dinner by that time. We were already talking about a rebate in 2021. Same crew, more snow. Since then, with all the border closures and travel restrictions, for the first time in years we’re not heading across the Pacific at the start of winter, though if we could, we’d have the perfect place to quarantine. I’ve thought a lot about the resort over the past few months, particularly the nightly BINGO game, which I’m sure has remained intact each day. I like to think that the announcer is still calling off numbers each evening to excited families as they punch the holes in their BINGO cards, a sign that there are some things you can always count on. 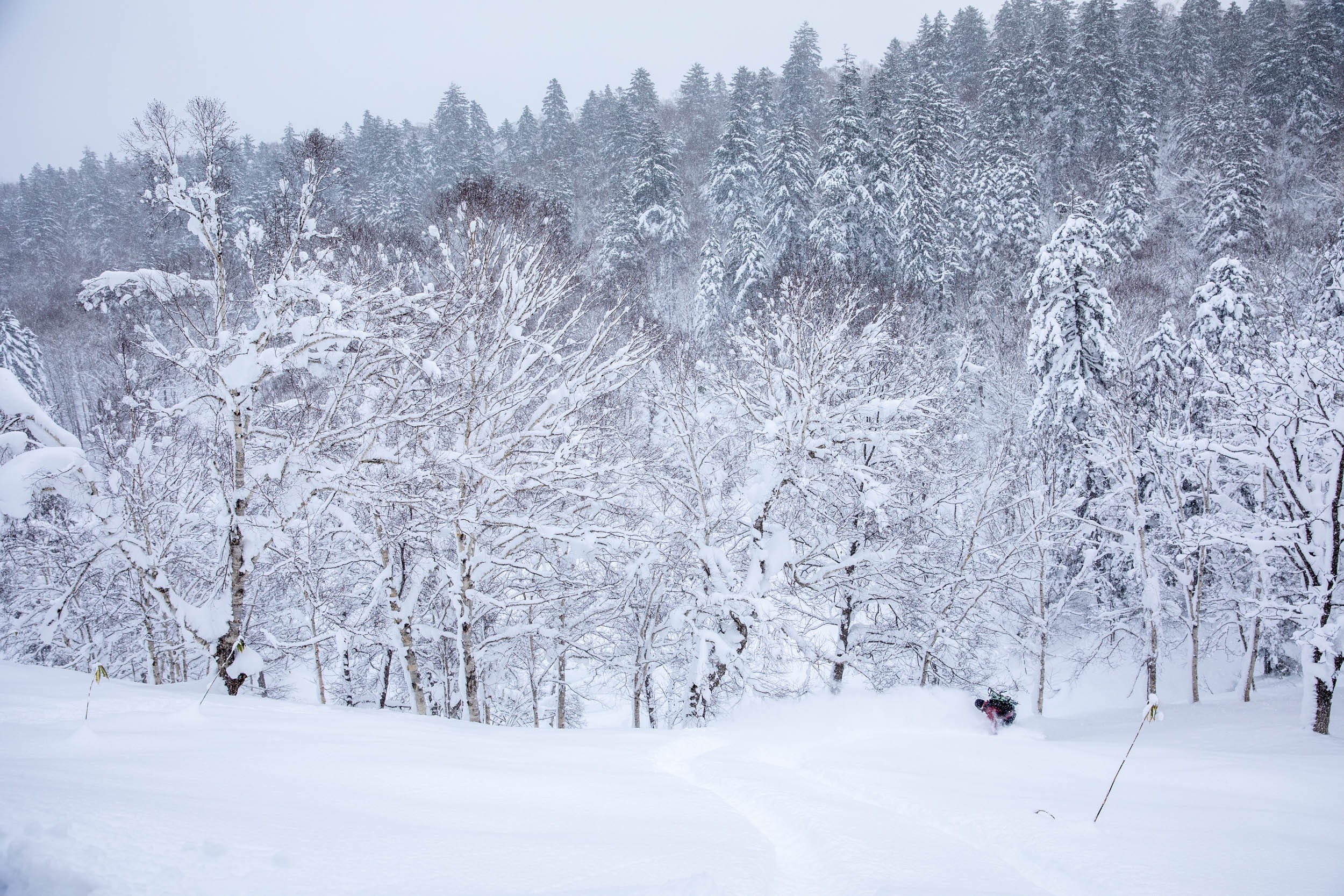