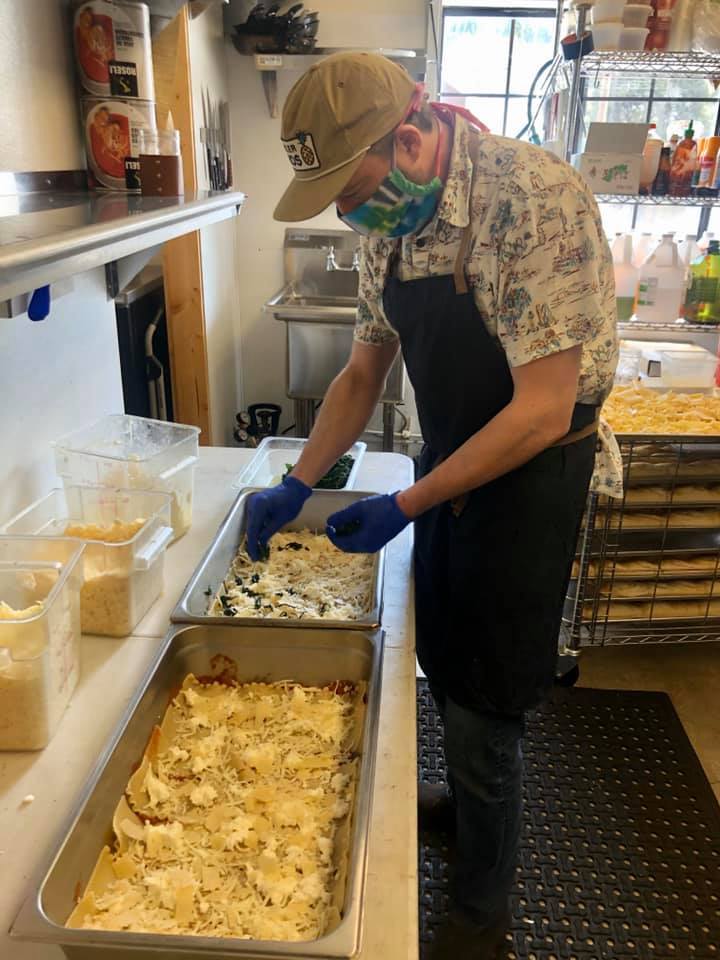 Last winter, Truckee-based snowboarder Rachel Graf partnered with the owners of Auld Dubliner in the Squaw Valley Village to open up Tremigo, a Mexican restaurant and tequila bar. After managing the Dubliner for years, when the perfect location became available at Squaw, the trio launched their endeavor just before Christmas as the ski season kicked off. Rachel’s husband, Danny McCabe, had also recently opened The Station – A Truckee Eatery in downtown Truckee. In mid-March, as resorts shut down operations and California’s Governor Newsom issued stay-at-home orders and the closure of non-essential businesses, Graf and McCabe, like many others in the area, were stopped in their tracks. Economically, North Lake Tahoe and its South Lake counterpart are obviously heavily based on resort, seasonal recreation, and tourism income. As winter storms finally hammered the area in early spring, providing the kind of conditions that bolster the local economy under normal circumstances, residents throughout the Sierra instead lost their jobs immediately.

“I’ve been working in restaurants out here for quite some time,” says Graf. “We had just opened Tremigo before Christmas. We got through the winter, finally got our liquor license, and then seven days later, we had to shut the doors because of Covid. The timing could not have been worse and it was right before the biggest snowstorm of the year. We had to lay off all of our staff, which totally sucked, and it was the same with my husband, Danny at The Station. So, here we are, young entrepreneurs who have opened businesses in the last year, and then everything shuts down and we’re in the middle of our ski season—our work season.”

True to the entrepreneurial spirit, Rachel and Danny brainstormed a way to try to help out their home and created Sierra Relief Kitchen. “We’re not used to not working,” laughs Rachel. “That’s hard for us. And we have access to these three commercial kitchens. I’m really close with the community and a lot of people had just lost their jobs. Obviously, we’re a resort town, so it was pretty catastrophic for our area as far as the economy goes. After a couple of weeks went by, hearing that people weren’t getting their unemployment checks, all of the undocumented workers around here weren’t getting any financial aid, we knew there would be some relief needed for this area specifically, and we thought the best way that we could help was by providing prepared meals. We just started chatting with my business partner and then another friend, Elsa Corrigan, who does a lot of work with World Central Kitchen, and we decided we were going to pump out some food.” 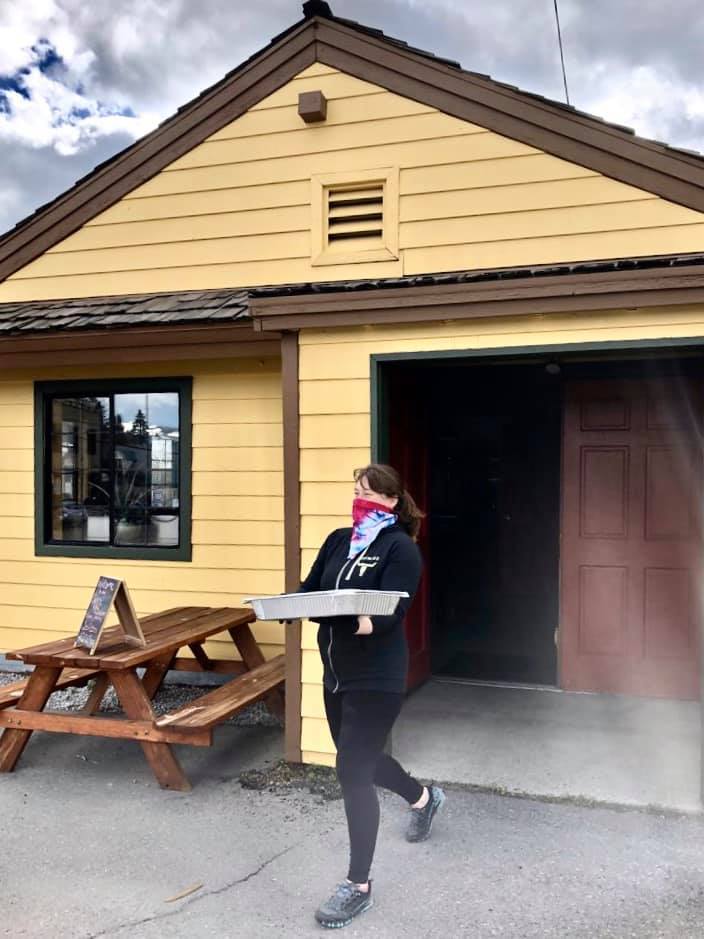 Rachel Graf doesn’t stop hustling and her efforts with Sierra Relief Kitchen are quickly making a big impact in Tahoe.

Sierra Relief Kitchen was born. Tremigo’s chefs, Veronica and Antonio Abundiz, volunteered to make a crowd’s serving of chile verde and chili Colorado. Chris Gallagher, who manages digital for Tremigo and the Dulbiner started to get the word out and drive fundraising. A Facebook page was created and a Gofundme was launched. In just over a week, over 15,000 dollars has been raised. And other local businesses immediately reached out to help—and new ones are still doing so every day. New Moon Natural Foods donated fresh produce to make sure vegetables and salads could be included with every meal. Granlibakken and Tahoe Basics are providing resources. Scott from The First Baptist Church in Tahoe City reached out right away to help coordinate transportation for food deliveries and to help make sure people in need are receiving meals. On the first day of operation of the Sierra Relief Kitchen, Thursday, April 16th, “We fed 100,” says Graf. “We were going to keep it at 40, but we just kept getting requests and it kept blowing up, so we were like, OK, let’s do this. On Saturday we did about 220 meals and then this coming Thursday I already have 300 people signed up. I can only imagine that number is going to keep growing. It’s been a trip.” Individuals and families in need run the gamut of occupations and demographics, adds Graf. “A single mom with two kids who’s an independent contractor and hasn’t gotten any financial assistance. The family of four, working as housekeepers and they all got laid off. The newly married young couple that lost both their jobs and were already going paycheck to paycheck to begin with. If we can alleviate a few hundred dollars a month for these people to put toward their utilities, bills, anything like that, then we’re doing a good thing.”

While all over the country—and the world—jobs are being lost and people face immense economic hardships, Tahoe locals—like folks in other mountain towns—have been further impacted by the area’s reliance on seasonal and recreation-based tourism. Read: many, many service tourism and industry jobs and few options for locals to pick up essential gigs in the interim. While in major cities, many restaurants have made ends meet through filling to-go orders and pivoting to grocery sales, the sustainability of Tahoe’s eateries relies on serving a population bolstered by seasonal visitors.  “I don’t know the stats exactly, but I’ve gotta imagine that 65%, maybe even 70% of full-time locals have lost their jobs. I’ve gotta say it’s a higher number compared to the national average just because it is so seasonally driven. I think this is going to affect this area for a really long time.” 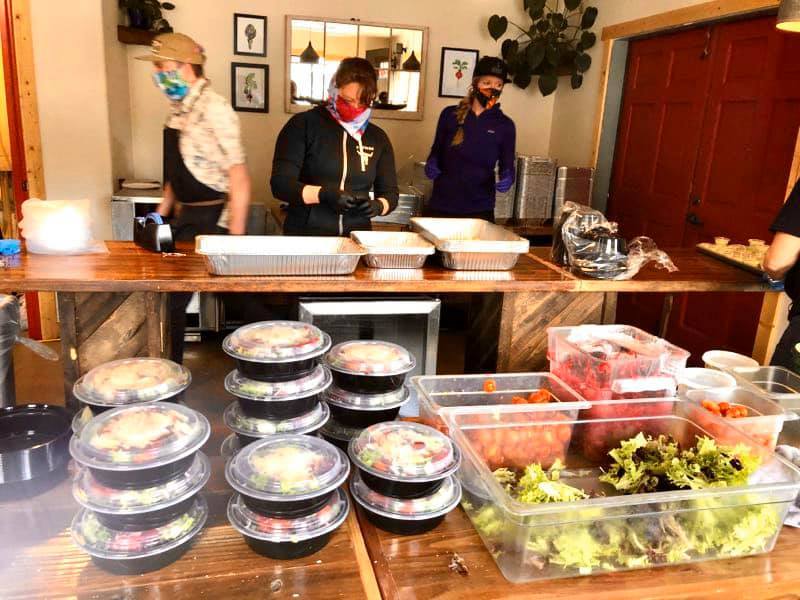 But if there is something that those with experience in the restaurant world know, it’s that the only way to figure things out is to keep pushing forward. You don’t get out of the weeds by standing still. Rachel and Danny have relished the opportunity to take action and are blown away by the response, something they didn’t expect to happen so fast. “It was so negative around here on social media and the news and trying to bring a little positivity to that feels really good,” adds Graf. “Like us, everyone’s been so excited about it. It’s nice to get our staff involved and maybe at some point we can put them back to work. We’re trying to get our 501c3 to turn Sierra Relief Kitchen into a non-profit. We have a couple of big donors that want to donate. It took off a lot faster than I thought. I didn’t think it was going turn into this bigger thing, but it’s cool because it’s getting a lot of momentum.”

In order to meet the need for meals and do so safely, Rachel, Danny, and their crew have been making sure they follow all protocol and regulations for social distancing and sanitizing while preparing and delivering the food. They’ve had more people want to volunteer their time than they can have in the kitchen, but assisting from home by spreading the word to reach people in need or who may be able to donate supplies is just as helpful. “It’s blown me away just how positive people have been. How people have been promoting the Sierra Relief Kitchen and how people have been reaching out to help. I just love to see that. It creates new connections and new friends. I think that we can make something positive come out of this bad situation.” 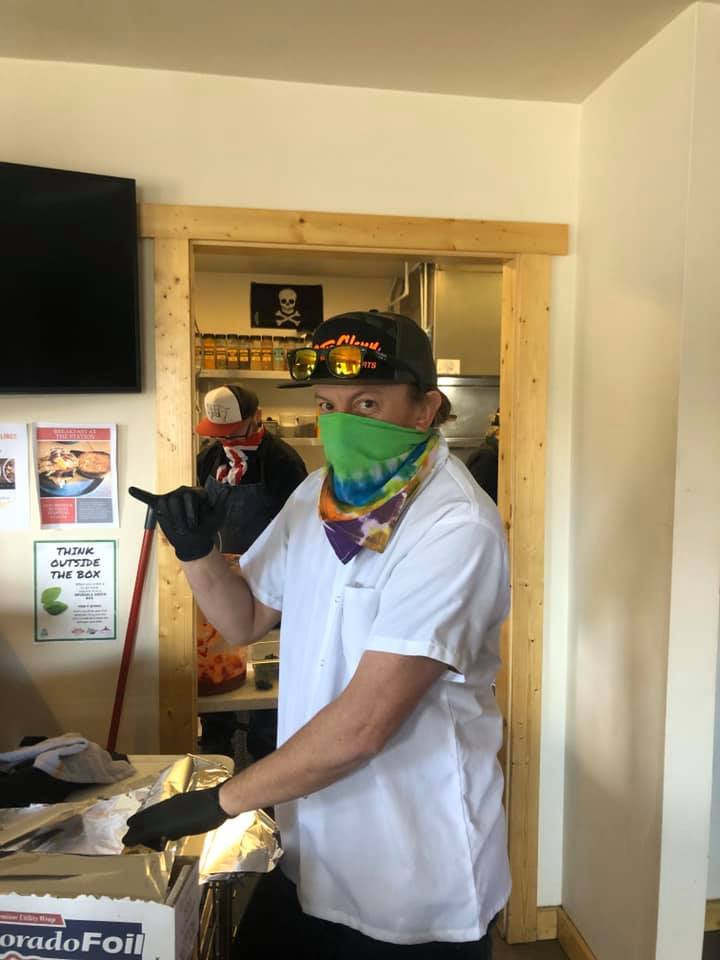 What’s next for Sierra Relief Kitchen? The sky is the limit for how this project can contribute to the community and Rachel’s hope for the future is both contagious and realistic when she thinks about the future. “We get this thing rolling and then maybe we start to slowly open the restaurants. Maybe we start doing to-go food, so we can try to get some money in the bank. Maybe this is a good way to get our staff back to work, at least our full-timers and our kitchen staff, and just see where it goes from there. Who knows how long this need is going to exist. We’re expecting it to last all summer and then maybe this is something we continue to do into the year. Maybe once a week, Tremigo puts out a Sierra Relief Kitchen meal for 100 people even when we’re in full swing. Same with Dubliner. Same with Station. We can continue to keep doing this as long as the need exists.”

If you or someone you know would benefit from the Sierra Relief Kitchen’s efforts, their meal service is open for anyone in need. Go to Sierrareliefkitchen.com and select “meal request”. You can reach out on Facebook at Facebook.com/SierraReliefKitchen and Rachel recommends emailing her directly, too. She can be reached at rachel@tremigotahoe.com. She’s more than happy to help.

“I encourage people to use our website or email me directly. I just need to know the family size. Everyone’s been signing up for both the Thursday and Saturday delivery and honestly, it makes it easier on our end if everyone signs up for both. And then, your address and if you require delivery or not. As far as eligibility goes, we’re just on the honor system. We don’t ask for any financials or credentials, just let us know how long you need meals. I’ll have you on the list until you request to be taken off and then you’ll receive those two meals a week until further notice.”

For more info go to www.sierrareliefkitchen.com. You can sign up to receive meals, to volunteer your time helping deliver, and donate to the Gofundme to ensure this program can keep helping local individuals and families in need.