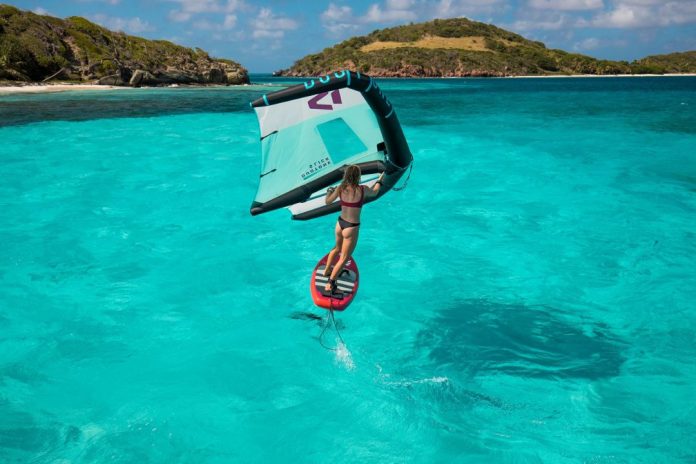 Fanatic releases their innovation into the wing foiling realm.  Introducing the Sky Air Premium, an inflatable wing foil board that you can carry with your full foiling kit on your back.  Now, that’s convenient.

The Sky Air Premium, Fanatic’s travel friendly version of their popular Sky Wing model has no compromise on comfort or ride, and it comes in a compact package!

Fanatic is excited to announce their new Sky Air Premium inflatable wing foiling board. It comes in 3 sizes:

Fanatic shaper Sky Solbach hopes to add a smaller board at 5’0″ later in the season as well. Each size construction offers an incredibly stable flight. The Sky Air’s innovative key design for its new purpose includes an extra rigid carbon plate fitted directly under the rider’s feet to make sure the foil follows every command instantly. The board’s shape features a pronounced nose rocker to make sure the touchdowns won’t stop the fun.

“Designing a really solid carbon plate that stabilizes the entire area between the foil and the front foot was a game changer in the process.”

Other added features include silicon rails to reduce the drag around the tail of the board. Also, designing footstrap inserts for three straps to help riders find their optimal placement and, finally, the essential feature of a bottom handle to carry the board with ease. This is ease and performance all rolled into one.

Fanatic didn’t stop at the design of a new board, but continued to break new territory by creating a backpack to carry it all in that also has wheels for convenience. The backpack is large enough to fit an entire setup of board, foil, one or two wings, wetsuit and pump.

The Sky Air arrives with a double action pump with a gauge to show pressure from 3 to 21 PSI. There are TWO green areas to identify the pressure for your (1) wing (around 6 PSI) and (2) the board (15 to 18 PSI).  So, now you don’t need to carry two different pumps. Multiple adapters are included, so users can pump up their Duotone wing as well as the majority of other available Wings on the market.

See you out there on the water!  Aloha, Fanatic!