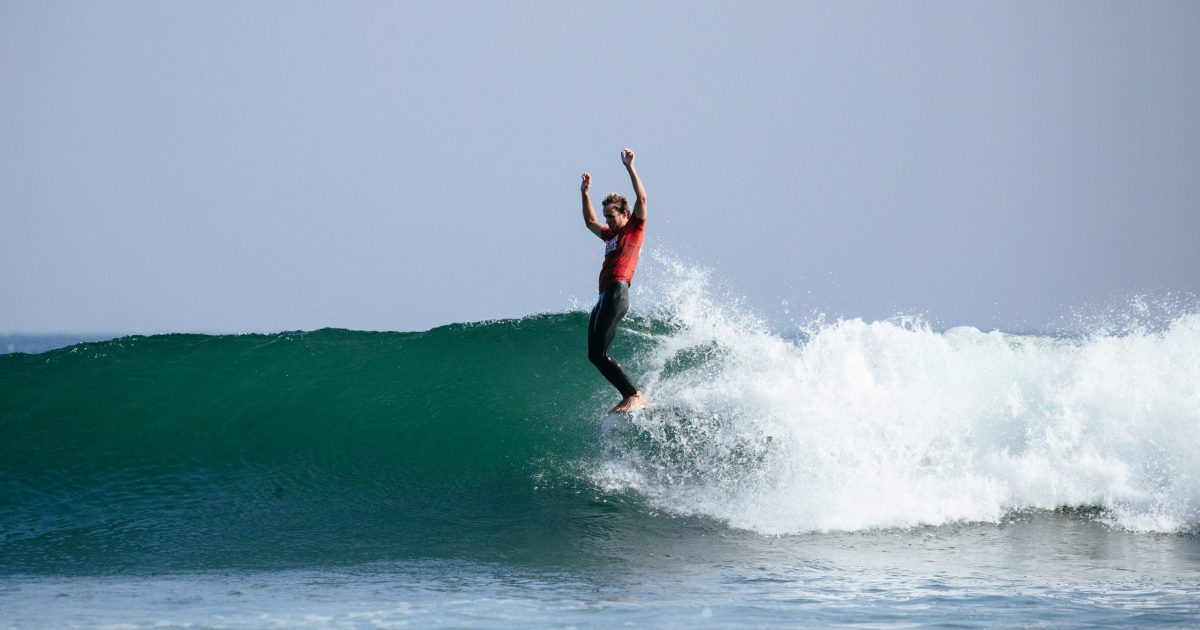 The 2022 World Longboard titles were claimed last week in dreamy conditions at First Point Malibu. Stylemaster Harrison Roach and previous world champ Soleil Errico perched their way to wins, beating out log lords like Kaniela Stewart and Kelis Kaleopa’a and Sophia Culhane in the process. Watch the finals day above, and if you’d like a more detailed wrap-up, continue reading below from the WSL:

Today, Errico got to celebrate her second World Title alongside family and friends at the wave that helped shape her as a surfer. She got off to a quick start in her Finals matchup against an in-form Sophia Culhane (HAW), dropping a 6.83 (out of possible 10) in the opening minutes. A solid set offered a huge opportunity for both competitors with Culhane earning a 5.67 and Errico an excellent 8.67. A brilliant exchange between the two world-class competitors then saw Errico’s footwork and transitions lead to an 8.10 as Culhane’s 7.33 kept her out of a combination situation, but Errico’s finishing 8.37 secured her win and the World Title.

Errico’s immaculate Finals Day run began with arguably the heat of the 2022 Longboard Tour season, with Errico taking on reigning event winner Alice Lemoigne (FRA). Both surfers turned in excellent 16-point-plus heat totals (out of possible 20), and traded off as the heat leader multiple times. Needing a 7.70 (out of a possible 10) in the final minutes, Errico was able to take the win with a 7.80, landing herself a spot in the Semifinals.

Errico’s momentum was unstoppable, carrying it into a critical Semifinal heat against event dark-horse Mason Schremmer (USA), where she accrued yet another excellent heat total of 17.57 before the decisive Final against Culhane.

Australia’s Harrison Roach came into the 2022 World Title race with the goal to surpass last season’s runner-up finish. He showed every sign of accomplishing this over the two event days at Malibu, culminating in the Final against World No. 2 Kaniela Stewart (HAW).

The men’s Final unraveled with Stewart accruing a 6.33 to get an early start against Roach. The Australian fired back with an excellent 8.83 to briefly take the lead before Stewart found a quick backup, notching a brilliant 7.67 and pushing his lead. Just shy of the 20-minute mark, a crucial exchange witnessed Roach find a gem opportunity to once again regain the lead posting a 6.77 as Stewart’s 7.57 fell short of the new, near-excellent 7.94 requirement.

The final minutes provided more drama as Roach fell on a great wave and left Stewart with one last chance to claim a win. However, Stewart’s style and flow all the way to the beach missed the required score by .04.
“I’m very happy, I got close last year and I realized at that point how much it takes to get here again,” said Roach. “I just put my head down, (and) made it count. I would’ve loved to have not fallen on that second good one, I left the door open for Kani (Stewart) there and he got close. When the beach commentator announced it I thought he had the score. It’s a relief for me. Longboarding didn’t have a platform like this and it was a different style of surfing, so I’m really fortunate to be here.”

Roach’s road to the World Title began with overcoming multiple event threats including three-time WSL Longboard Champion Taylor Jensen (USA) in dominant fashion, accruing the event’s highest single-scoring wave, a 9.17, and highest heat total of an 18.17 (out of possible 20), in their Semifinal bout. Roach also had to overcome an in-form Cole Robbins (USA) with a buzzer-beater in the Quarterfinals after a Round of 16, back-and-forth battle with former WSL Longboard Champion Steven Sawyer (RSA).

The Australian made his big return to competing in 2019 as the WSL Longboard Tour made its transition and had one goal in his mind, claim a World Title. Seen as one of the sport’s top-tier competitors from a young age, Roach’s persistence and undeniable talent helped pave the way to where he is today and made his dream a realization.

The 2022 World No. 2 Stewart started his Finals Day campaign with an impeccable performance, taking out fellow Hawaii surfer Keoki Saguibo. The 21-year-old kept his world-class form intact heading into a high-stakes Quarterfinal against Longboard Tour veteran, Tony Silvagni (USA). Silvagni pushed Stewart to the limits and left him needing an excellent score, which he achieved with under five-minutes to go. The ocean provided for Stewart once again in a Semifinal clash with event standout Declan Wyton (AUS), and with one-minute remaining he earned an 8.07 to make his appearance in the Finals.

“It was so much fun to be out there, Harrison (Roach) was killing it,” said Stewart. “There was waves, and it was so fun to be surfing with one other guy out at Malibu. It’s perfect out there and we had a good time. I’m ready for next year, just come back stronger, get back to training and watch some videos, and just try to get better.”

A history-making run for World Title longshot Culhane came to fruition after she had two incredible performances, beginning with a Quarterfinal dual against three-time WSL Champion Honolua Blomfield (HAW). Culhane left Blomfield in need of an excellent 8.10 as time expired, eliminating the former rankings leader. She then went on to overtake another World Title threat, Kelis Kaleopa’a (HAW), in the Semifinals with an awe-inspiring display of style and flow.

The Top 8 men and Top 8 women on the rankings following the Cuervo Classic Malibu Longboard Championship will now prepare for the 2023 WSL Longboard Tour season, which was announced following the event’s conclusion.