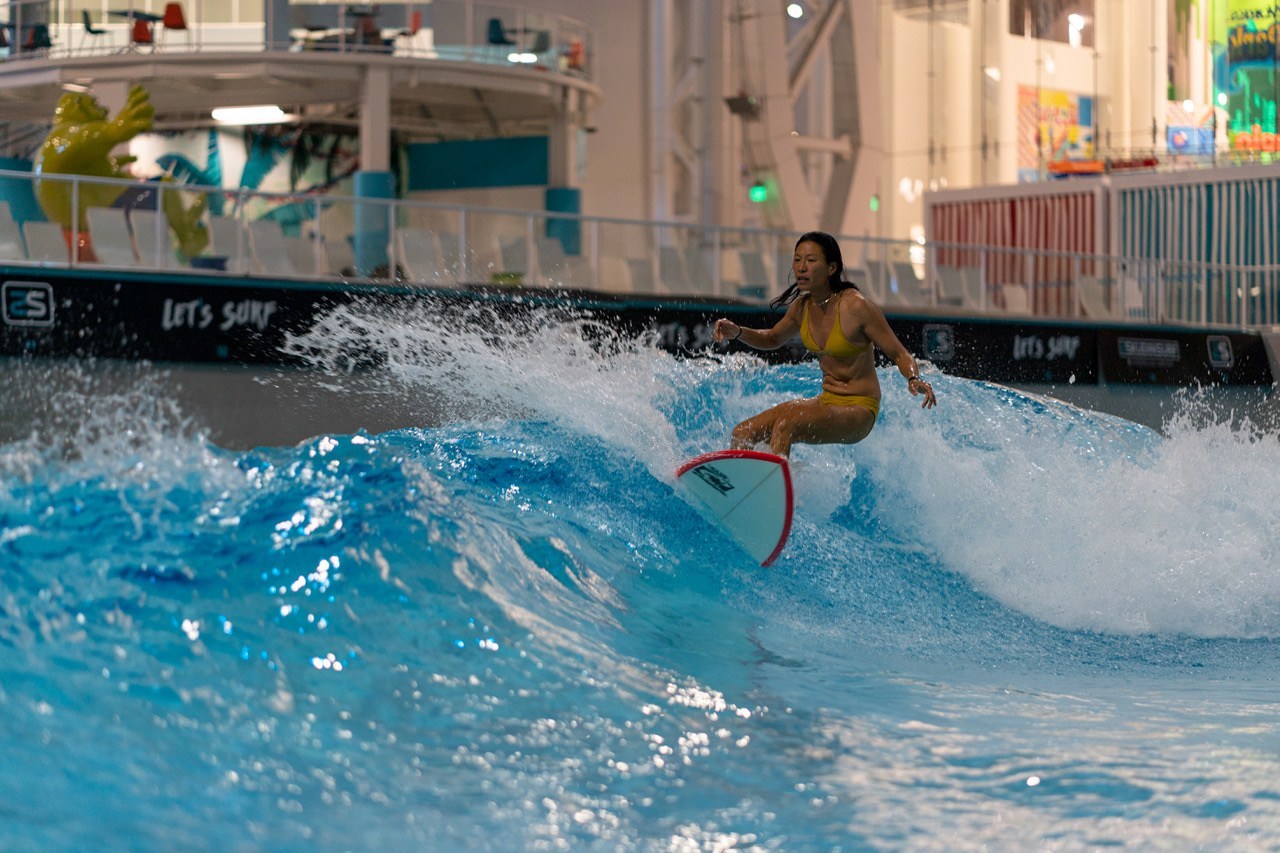 New York and New Jersey have a reputation.

Actually, we have a couple of reputations. And one of them is honesty.

Granted these are sweeping generalizations but that chill West Coast ever-positive demeanor doesn’t always jive with reality. Folks in New Jersey and New York tend to tell it like it is.

When the waves, the weather, the pizza or the Giants suck, we say they suck. (The rest of the country could take a lesson on mini-mall pizzerias.)

But when conditions do line up, we will be the first to wave our arms and claim epic.

After 15 years of hearing about an indoor wave pool, Skudin Surf at American Dream in East Rutherford, NJ, is open and the locals are calling it as it is.

“It’s not the biggest man-made wave. It’s not the longest. It’s not the punchiest. But it’s a one-of-a-kind surf experience,” says Will Skudin, pro surfer, surf coach and co-director of operations at Skudin Surf.

Surfing to a soundtrack inside a mall is definitely a unique experience.

That’s not to say Skudin doesn’t dream big. He is from Long Beach, New York and for the last ten years has chased massive swells and competed on the World Surf League’s Big Wave World Tour with the most elite hellmen in the most harrowing seas around the globe.

Even being a professional big wave surfer from just outside of NYC, Skudin has taken a very realistic approach to his partnership at American Dream.

“We knew what we had here but it doesn’t really translate to photos,” explained Skudin, “We didn’t want to start hyping it up. You don’t see the potential until you ride it. We have the ability to create a lot of waves in a short period of time and a variety. Everyone who leaves here is laughing and smiling. They’re doing the marketing for us,” Skudin explains.

He is sharing the directing duties with Ocean City’s Rob Kelly, the most high-profile surfer representing New Jersey on the global scene for the last decade. 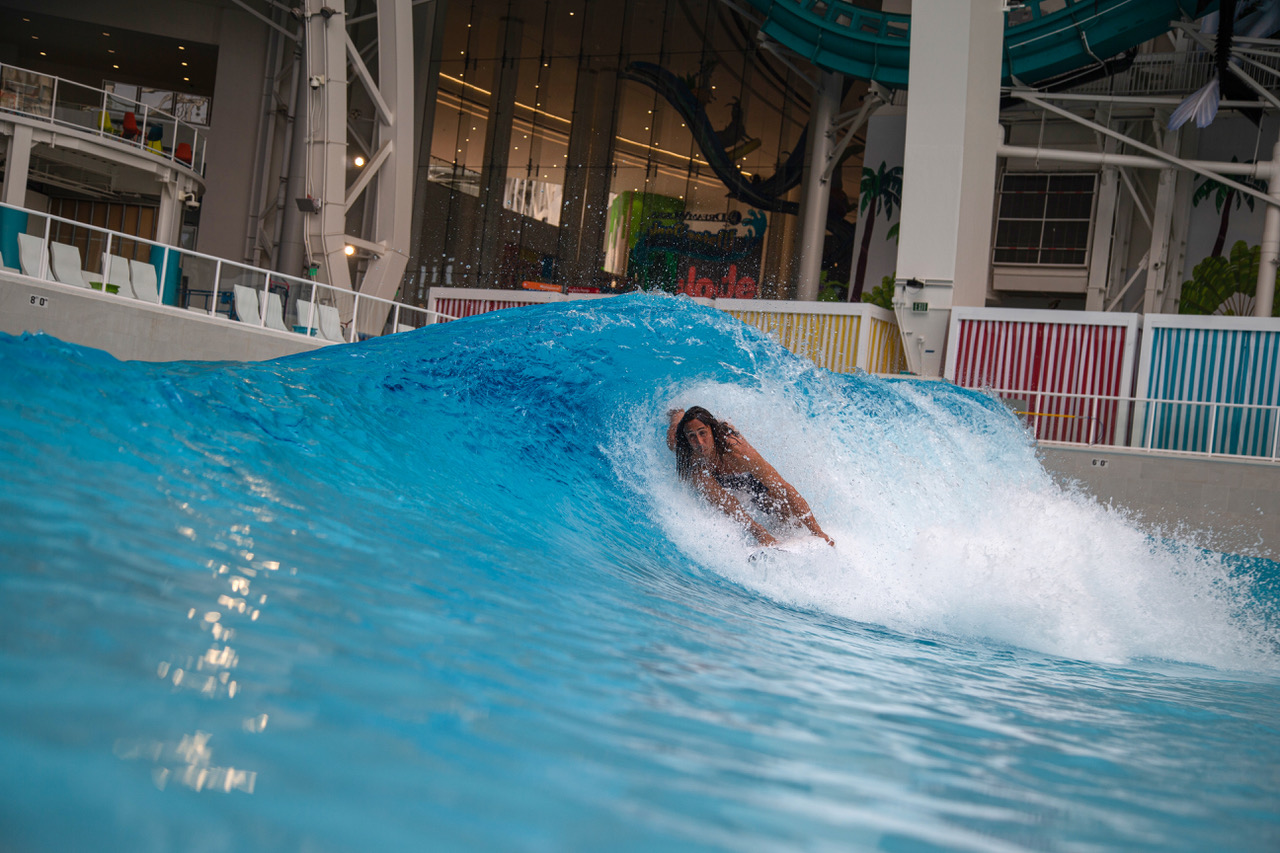 Being a surfer on this stretch of coast is an exercise in patience. In addition to few features like reefs, inlets, and points, the ocean will go from flat to heaving within a few stormy hours. On, off, or sideshore winds all blow hard and swells are short lived. You can wear trunks for four months, but summer surf is small and then the ocean can dip down to the 30s when it gets bigger.

And much like ocean surfing, a wave pool here faces some barriers, the first one being winter, which arrives in December and lasts into May. An outdoor wave pool’s season might only be six months, considering the risk of freezing pipes, which wouldn’t be a sustainable business model. So indoor is the only option. And since real estate here actually costs something as opposed to Lemoore, Ca or Waco, TX, space limits the quality.

But Skudin Surf makes up for that with quantity.

The park contract went to American Wave Machines, which designed the BSR Surf Resort in Waco, TX. AWM put its Perfect Swell” technology into action and really made the most out of the square footage. Lots of turns off the turnpike.

“We’re firing air compressors at different times to create a variation of waves. We have 14 waves out of the gate and every wave allows for a different maneuver or style,” says Skudin. And all of this is eight miles from Midtown, Manhattan, which can take 12 minutes or (since we’re being Jersey-level honest) 90 minutes with traffic.

The key is the number of waves the machine can produce. Skudin claims the pool can churn out a wave every 21 seconds, more than any other wave facility in the world. Essentially, there’s no waiting.

The basic performance wave names have created the acronym WAVES – Warm Up, A-Frame, Vortex, Epic and Section. Currently because of pandemic restrictions, the pool is only open for group rental “Sessions” by the hour.

“We make it a whole experience of magic moments. The technicians adjust the waves and we have it set up to music. We fire the first wave and then we make an announcement later that you’ve been surfing for ten minutes. The surfers have already had so many waves that they’re exhausted and everyone starts laughing hysterically,” says Skudin with a chuckle himself. 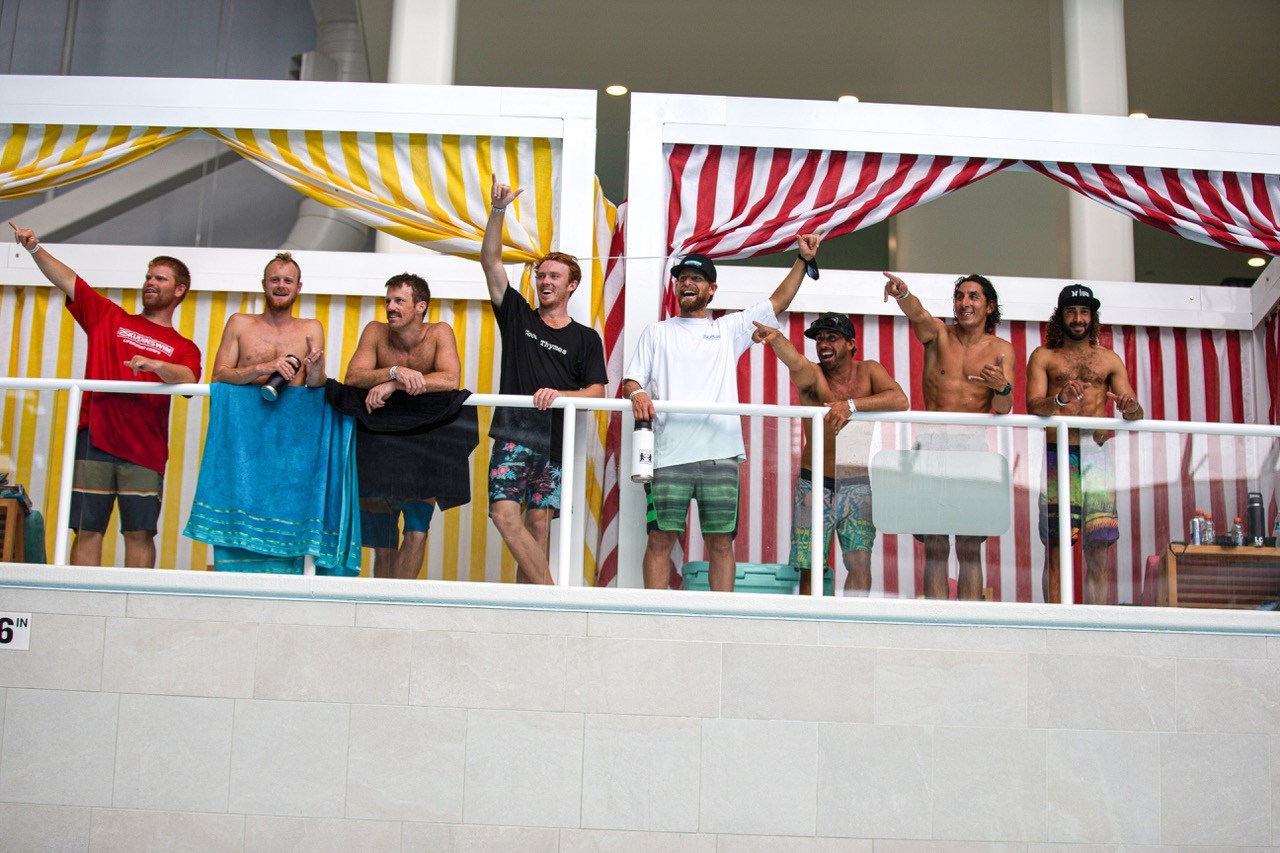 The wave is part of a massive complex that includes shopping, dining, an indoor theme park, theatres, mini-golf, an ice rink, as well as the Big Snow ski dome and apparently more coming in 2021 at the famed Meadowlands.

The sessions run $1,800/$2,100 for an hour session on a weeknight/weekend with a $600 discount for the second hour. There’s a 4% reservation fee. Custom coaching, photos and videos are added costs.

Folks from New York and New Jersey don’t sugarcoat it when they think something sounds pricey. But at over two waves a minute and the ability to split the peak, you can split the price among families, teams or groups, and surf your bagels off (native speak) for a reasonable rate while kids and beginners coast the whitewater on the inside. 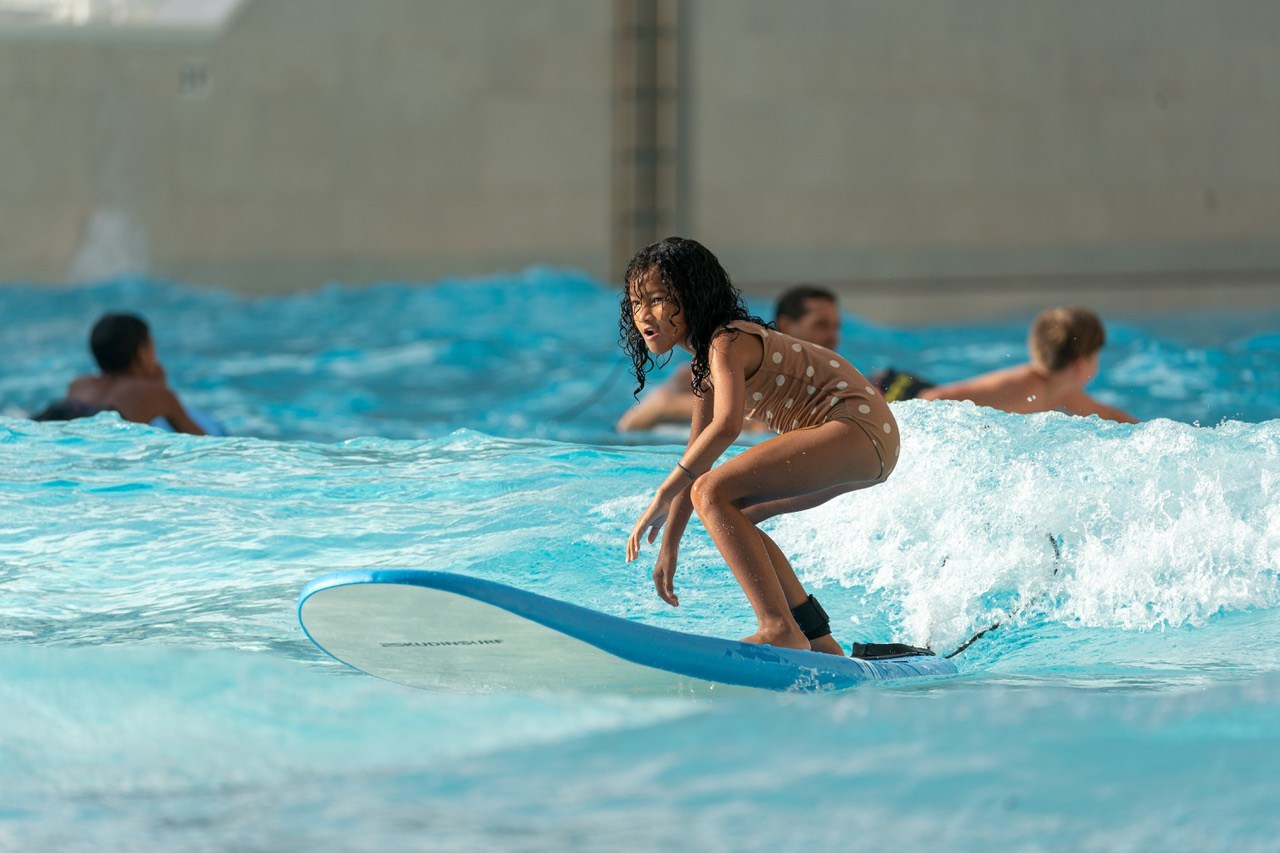 There’s a wave for every surfer at Skudin Surf.

“It by far exceeded my expectations,” said Tim Fitch, a Manasquan, New Jersey surfer and father of two, one of the first to ever patronize the wave.

“We had a great crew and that’s important. My daughter is 10 and my son is 12, with a bunch of our friends. It blew our minds. No complaints from anyone. We took 15 people and that was just about the perfect size; six to eight surfers out for 20 minutes at a time. Almost everyone agreed that the A-Frame split peak was the way to go. We had little kids and my wife riding the Rubber Duckies section on the inside. And that’s not to mention we had Skudin and Rob Kelly calling us into waves.” 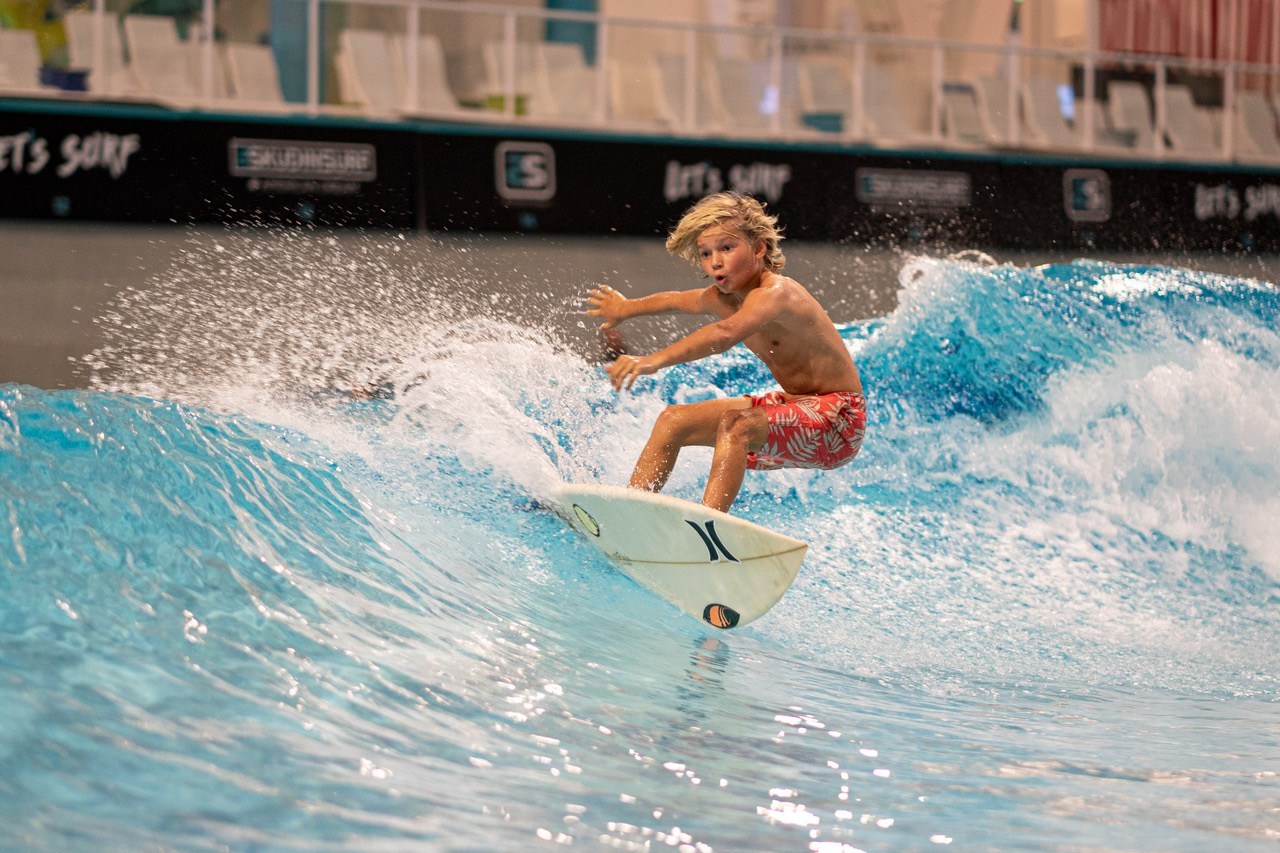 This grom’s face says all you need to know.

Being in the NY metro area, it’s also close to millions of people. Skudin Surf is about an hour from Rockaway Beach or Manasquan.  And unlike some other pricey parks, if you blow a wave or two, your trip isn’t ruined.

“I kind of think this park brings the fun back to surfing,” adds Skudin.