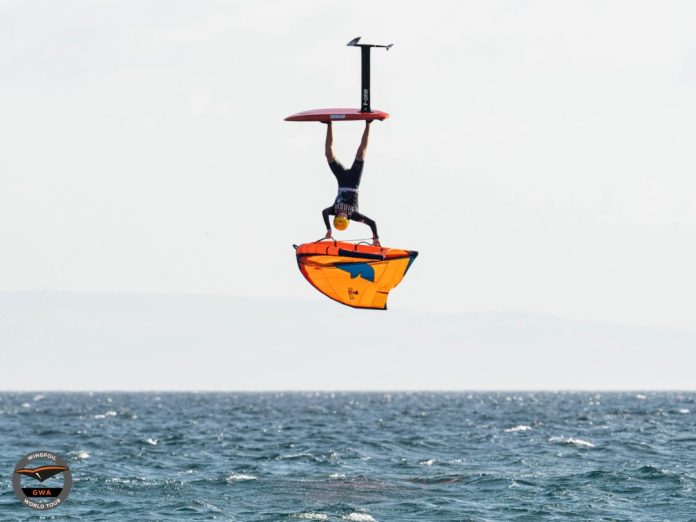 The GWA Wingfoil World Tour crew is delighted to be back in Tarifa for the penultimate event of the 2022 season! Forty-eight men and fifteen women are registered to participate in this competitive Surf-Freestyle event. Watch the video from the first day of action and read on for the full report:

Women’s Rounds 1 to 3 were first on the water. The wind was blowing around 15 to 18 knots on this day in Tarifa, Spain for this iconic stop on the GWA Wingfoil World Tour.  The women performed consistently well throughout each round, with all of the top seeds surviving unscathed and advancing to the quarter finals. They performed a solid variety of tricks including front and backside 3’s, raleys, toe-side frontside 3’s and air gybes. Tomorrow we continue with the quarter finals. Currently, the close run for the 2022 World Title lies between Paula Novotna and Nia Suardiez but that could possibly come to an end if Paula Novotna were to win here in Tarifa. A win would automatically make her our 2022 World Champion. However, if Nia Suardiez claims this win, then it would all come down to the final event of the year in Brazil next month.

The most impressive female performance of the day was from the current leader, Paula Novotna, who has been training in Tarifa for several weeks already. Evidently, her hard work seems to have paid off. She achieved an overall heat score of 27.23 points – substantially higher than the rest of the female fleet today.

One big contender missing from this event is Balz Muller. Balz is unfortunately not here due to a recent injury he sustained. However, his absence opens the door to other athletes to advance further up the ladder and – potentially – grab his current 2nd position in the general rankings.

The new generation of wingfoilers were hitting hard today, racking up impressive scores to get the competition started. Malo Guenole was definitely in fine form. His frontflip scored him 8.40 points. Young gun, Chris Mac Donald was equally unstoppable during his heat, showcasing his frontside 7 scoring for an impressive 9 points. This was the highest score of the day!

Tarifa Wing Pro:  Athletes Get Ready for Next Day’s Action!

The winners of each heat advance directly to Round 3, while the other two competitors will receive a second chance in Round 2.

The wind dropped around 6pm in Spain, making heat 8 the final one of the day. The action will continue on Thursday, October 13, 2022!

There are three more days of action ahead and organizers are hoping for a really big day on Thursday for the potential climax in the women’s competition. This day could possibly crown a wing foil world championship. Stay tuned!