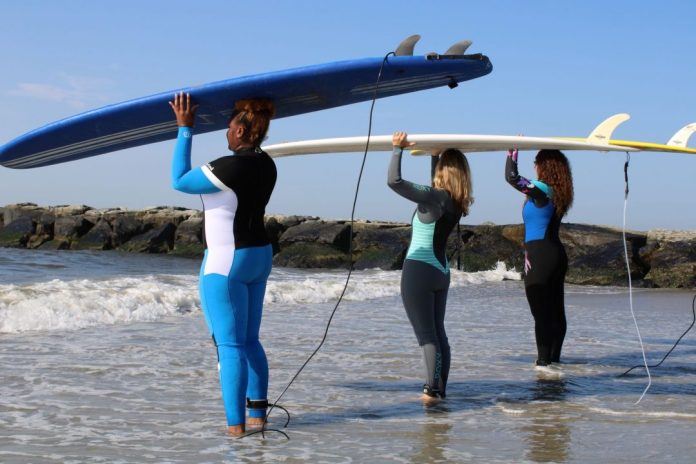 Over the past decade, the effort to encourage women to be more compassionate towards themselves through the Body Positivity movement has influenced multiple surf apparel and women’s wetsuits brands to increase sizing options, and make watersport apparel available to more female body types.

Women Watersport Influencers are on the rise!
Check out the Manera Women’s team HERE

In an interview, Sneed explained, “Following social media accounts of individuals who publish breakthrough information on the development of body positivity is essential to convince women who don’t have the stereotypical ‘surfer girl shape’ that they too belong in the surfing world. Mainstream media continues to employ the typical model. It is important for consumers to find the revolutionary media that will inspire them individually.”

Sneed continues, “We don’t need anyone to feel their body is unacceptable by society’s standards.”  In a recent photoshoot with Ripcurl, Sneed challenged those standards and was photographed along with seven other women of varying shapes, sizes and colors. At Curvy Surfer Girl, women won’t need to look a certain way to surf and have fun, especially when donning a bikini.

“The lack of sizing in wetsuits for woman in colder climates around the world means they cannot participate in surfing unless they purchase men’s wetsuits or have one customized for their measurements.

These issues and others will require more effort by women on all levels to advocate for representative media, fashion, & equipment by the surf industry. We need more women of varying shapes, sizes, and backgrounds to be encouraged to actively participate in surfing worldwide.”  – Elizabeth Sneed

Until recently, it has been challenging for women to find wetsuits for plus-sized shapes. By contrast, it is easy to find equivalent sizes in men’s wetsuits. Chris Holub, Co-Manager and Wetsuit Buyer for Sundown Ski and Sport and Director of the Eastern Surfing Association (ESA) in New York clarifies that there is certainly a demand for plus-sized women’s wetsuits; however, due to their unavailability, women often settle for fitting into a men’s wetsuit instead.

Holub says, “Because of this, companies count it as one more men’s suit sold instead of investing in a plus-sized women’s line.”  He goes on to say, “As a buyer, a surfer and a huge supporter of women’s athletics, I actively try to find and support those companies that bring these much-needed products into fruition. Women shouldn’t have to settle for misfitting wetsuits, ever. To be in the water, we need to feel comfortable and we need our gear to fit us properly.”

Brands on Board to Change Way Surf Industry Represents Women

As the Body Positivity and Inclusivity movement continues to make waves in the surf industry, companies including Glidesoul, Roxy and Truli have begun increasing their size range and include more diverse models types within their ad campaigns.

In an interview with Glidesoul, they explain, “GlideSoul suits are designed with the female body in mind. Our tagline is, ‘For every woman and every watersport’. Therefore, our sizing has to reflect that. By adding additional sizes, we cater to more women. We capture women with smaller frames whose only other options have been children’s styles as well as larger women who otherwise wouldn’t be able to buy the athletic gear to keep them warm and protected in the water.

We also see more and more women purchasing water apparel for cooler temps and we want to be able to support these women in their adventures. Broadening our size range is the start of that.”

It’s Time to Get Real

Seeing companies like Roxy include genuine images of women of varying sizes on their website is a great start to spreading acceptance and inclusivity in water sports.

Elizabeth Sneed states, “Although we do have women in sports, it’s time that we include even more women. Seventy years is a long time to only represent one type of woman. It’s the 21st century and there is more than enough room for all types of women to share in the spotlight.”

As a watersports athlete, it is refreshing to hear these issues finally being voiced, whether through more inclusive sizing, more realistic women acting as influencers for specific brands or increased awareness through initiatives such as Curvy Surfer Girl. Let’s keep it going. Thanks, ladies!