The Brief History of Longboarding 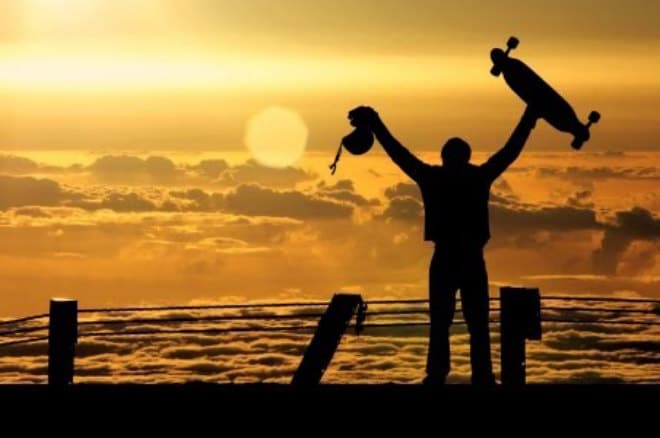 Knowing the history of a sport increases its fun even more. If you’re a skater and enjoy longboarding, continue reading to know about the brief history of this refreshing activity. Street surfing was initially originated in Hawaii somewhere around the late 1950s. Longboarding is a blend of skating and surfing. From the beginning to its expansion, in this article, you will come to know everything about longboarding in exquisite detail.

If we go back to the history, the fun of longboarding started in 1959. Surfers in Hawaii introduced this modified version of surfing on a wheely longboard. The reason behind this modification was the weather of Hawaii. Sometimes, waves in the sea were not ideal for surfing restricting the surfers to practice. Considering this scenario, longboards were introduced to allow surfers to enjoy surfing on the street during unfavorable weather conditions.The urge of surfers to surf regularly without giving any break led the formation of skateboard to a little modification into longboard. This means that skateboards were already in use and later were modified into longboards for sea surfers. To understand the proper progression of longboarding, we will discuss all development eras one by one in detail. 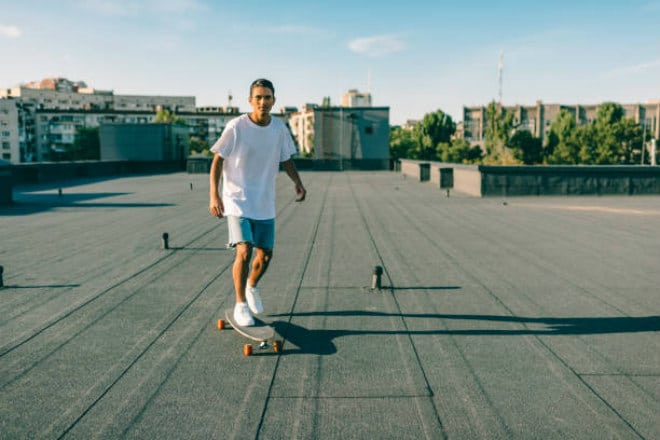 Initially, somewhere around the early 1950s, skateboards were considered no more than kids’ toys. This is why necessary modifications were made to the traditional design of skateboards to make it an excellent road rider. Between 1959 and 1965, initially, conceptualization took place in Hawaii by a group of active surfers regarding the making of longboards. Firstly, they built a model version small in size with the use of thick plywood. Trucks and wheels were attached to this wooden deck by using random screws. This initial model of skateboard was then used by them in hilly areas where they began their first skateboarding journey.

Age of Downhill and Street Surfing 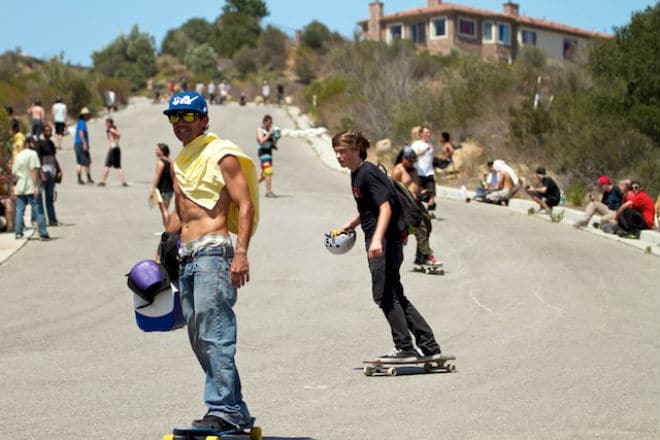 As we had already mentioned that when the sea waves were not in favor of surfing, surfers wanted to get on the road without skipping their practice. Hilly stations were the first choice of initial Hawaiian surfers for skateboarding hence downhill skateboarding is the early style every tried by skaters. This style is still pretty favorite California and Hawaii as traditional skateboarding style. Later, with gradual modifications and useful advancements, skateboards were made entirely compatible for street surfing as well. Strong and sturdy trucks and wheels were installed to bear the harsh and frictional surface of concrete roads and streets. 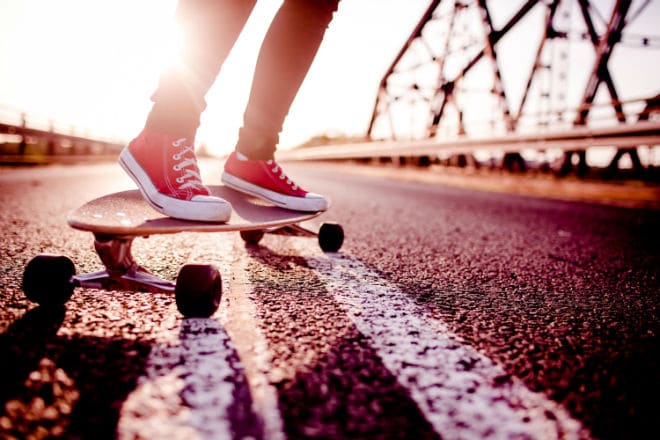 Gradually, skateboarding became quite popular among surfers who were fed up with unfavorable sea weathers. During that initial period of skateboarding, Penny Boards were quite popular and were widely used by most of the surfers. Somewhere around the 1960s, skateboarding on the California coastline became a trend and led to an increased demand of skateboards by surfers. Considering this scenario, many companies started manufacturing skateboards.In 1963, the first exhibition of different models of skateboards was held in California. A TV show also covered this exhibition and played a significant role in the promotion of skateboarding. With the release of several skateboard models, surfers began to enjoy tricks and drills as well. They were happy to surf on the road as they didn’t need to wait for friendly waves anymore to enjoy surfing. 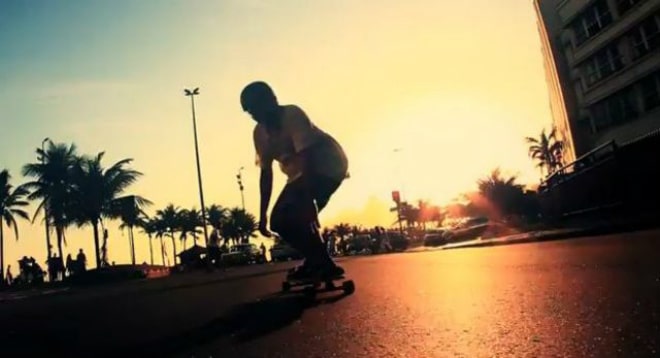 Surfers were so happy with the formation of skateboards because they didn’t need to wait for waves or favorable sea weather to enjoy surfing. However, boards were not as durable as expected. Consisted of clay and wheels, the boards were not as stable as surfers wanted them to be. Such kind of wheels was not in favor of regular and energetic surfers who were so much into tricks and drills. Decks were also not made with high-quality wood hence would break during drills. Considering that, parents didn’t find skateboards safe for their kids and prevented them from riding. This scenario led to a considerable reduction in skateboard popularity.

More Improvement in the 1970s 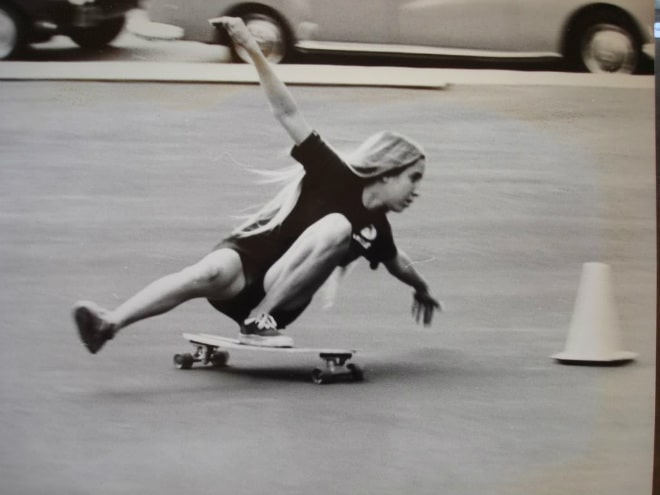 In the era of 1970s, colossal progression took place regarding skateboard and longboard advancement. During this era, the design of longboard was modified to make riding more comfortable and more thrilling for the riders. They focused on their technique of riding and made significant improvements in the traditional design of longboard. Those modifiers were also given the title of ‘Cult of the Longboard’ in 1978 in a favorite skateboard magazine. According to these experts, longboarding is an art of expression. They invented polyurethane wheels to enjoy better performance of skateboards and longboards. Although this period highlights significant progression in the making of skateboards and practicing of this sport, it cannot be marked as the golden era of the skateboard. 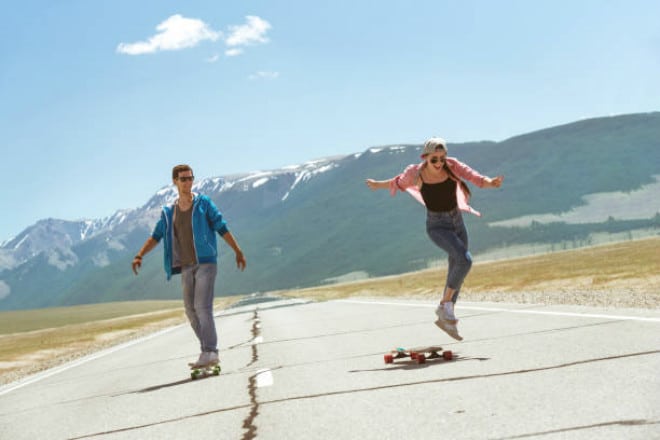 Finally, during the 1970s, skateboard and longboard got their identity. Modifications made in the deck size and wheels differentiated the models of the skateboard from a longboard. Polyurethane wheels offering perfect traction and stability were only used for skateboards. Coming to the length of the deck, longer skateboards were titled as longboards. Longboards with more extended decks allowed users to enjoy cruising and street riding. Whereas, smaller decks of skateboards made drilling and trick attempt more fun and more comfortable. These significant difference gave both types of boards a separate identification and made it easier for users to make the right choice.

Development in the 1980s 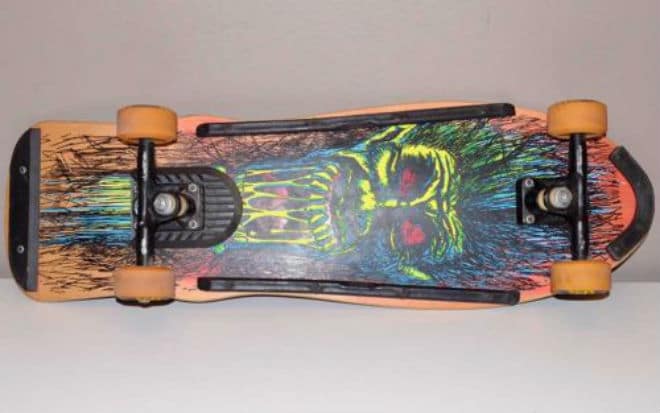 In the 1980s, both types of boards ran side by side serving different purposes. Somewhere during the early years of this era, a separate and functional model of longboard for downhill style was introduced. Although this is the era when skateboard and longboard held their identity, the boards were almost same in size and shape. Longboards were not noticeably longer than skateboards. Shapes of both were also almost identical and didn’t highlight any significant differences.However, big sized polyurethane wheels and a smaller deck of longboard made it quite easier and smoother for riders to enjoy cruising. The mini longboard with around 55cm to 76cm made it more comfortable for the riders to get control over the board. What made it more interesting was that it was easy to carry anywhere and keep in the locker safely. Students especially found this mini longboard travel-friendly and lightweight.

In the 1990s the Great Improvement 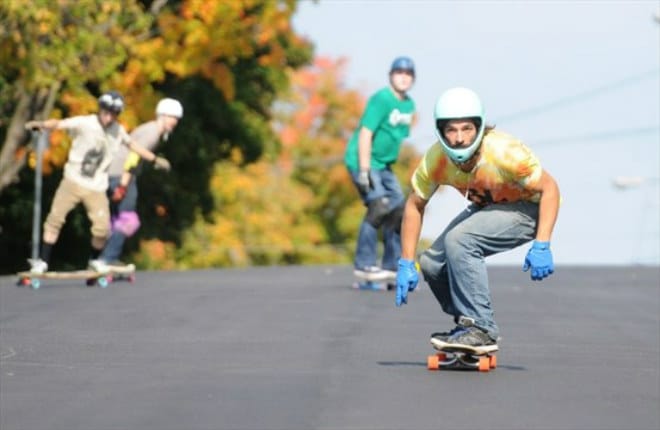 If it comes to marking the era of significant progression and expansion of longboards, it would be the 1990s! The company Sector 9 was the first one to start the production of skateboards commercially. They took this initiative in the mid-1990s. Before them, no commercial production of skateboards ever took place, not even in Hawaii or California. After this initiative by Sector 9, longboards got the real popularity and extensive use.This period can be called a revolutionary era of longboards. Sector 9 introduced the functional kingpin truck for the longboards that played a prominent role in the performanceupgradation. Kingpin trucks increase the maneuverability and responsiveness of the longboard. This feature also plays a significant role in making the board more controllable and stable.

Unlike a skateboard, the use of longboard has been quite extensive from the very beginning. The styles to ride this particular object have upgraded from time to time. In the beginning, as we have already mentioned above, longboards were only used for downhill riding and street cruising. Later in the early 2000s, longboards became favorite riding equipment for the youth and athletes. Gradually, the use of longboards was diversified, and different styles of riding were attempted with this equipment.Aside from downhill and street cruising, longboards also turned out to be entirely compatible for carving, freestyle riding and sliding. Professionals began using them for tricks and drills as well. The most popular tricks users attempt with longboards are called Ollie and Flip-kick. This is how longboards proved themselves to be the most multi-functional riding equipment. 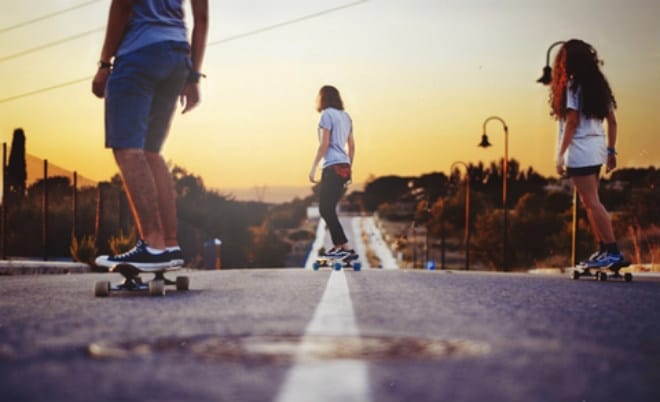 Finally, in 2010, longboards were mass popular! People used this equipment for various purposes. Some rode it to seek fun while others used it as a source of transport. City touring on longboard has been a significant trend from the very beginning. People with longboards always preferred covering small distance with this fun equipment in a natural way while enjoying refreshing city environment.In this period, the majority of students came to college riding their longboards because it was easy to carry indoors and ride the narrow paths inside the college. Many of them always loved to perform thrilling tricks in college to impress their friends. In fact, longboard races and maneuverability competitions were also held publically and in colleges to promote this sport. 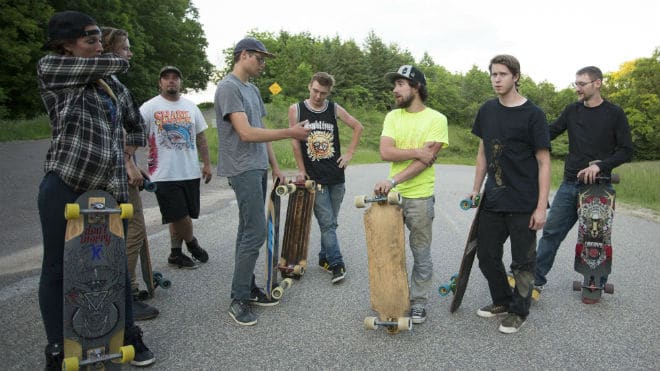 In this current age, longboarding is quite popular among kids, teenagers, and adults. Now, this sport is relatively advanced. From the production of longboards to their marketing. Everything is done on a broader scale. The high-quality material is used in the making of innovative models of longboards. Aside from manual longboards, now electric longboards are also available in the market. These are ideal for short distance traveling especially if the rider is not in the mood for investing any energy.It won’t be wrong to say that this current age highlights the dramatic popularity and acceptance of longboards. Majority of youngsters use latest models of this riding equipment to enjoy road surfing and quick traveling to school and college. With every passing day, there is an increase in the riders resulting in rising in the selling of longboards. Longboard industry has become quite a business with upgraded marketing and high production.

Now, this sport is not only restricted to the sports magazine but is also covered by renowned sports channels. In short, this activity has become quite a thing! 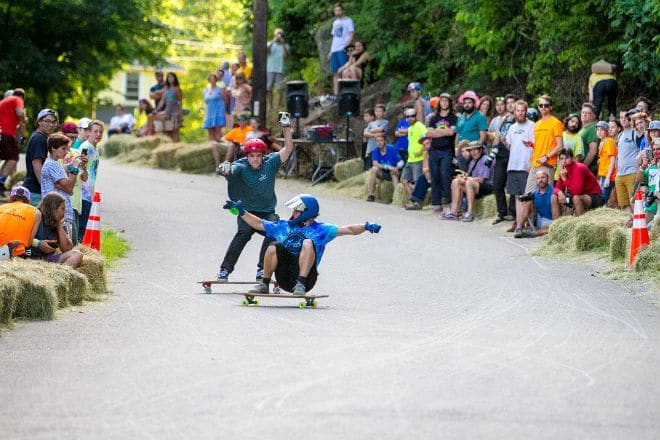 Considering the expansion of longboarding and its popularity among youth, history of this sport should be a part of academics. Kids should know the gradual development of longboard to understand the fundamental purpose and functions of this riding equipment. As rapid advancements are being made in the models of longboards, people should know about the technical aspects to choose the best model from the wide variety. Manufacturers continue introducing latest advancements in the previous models to keep riders involved and amused. They are also focusing on using the high-quality material to make longboards more functional, stable and maneuverable.

The advancement of longboards is like a long journey with short pauses. This activity has taken many years to establish itself as a proper sport among youth and adults. Beginning its journey from the 1950s, longboards have been through a lot of advancements and modifications to reach the peak popularity in the current age successfully. From amusement to traveling, longboards have served riders in many ways.