The ‘CT Women Just Made History at the Billabong Pro Pipeline 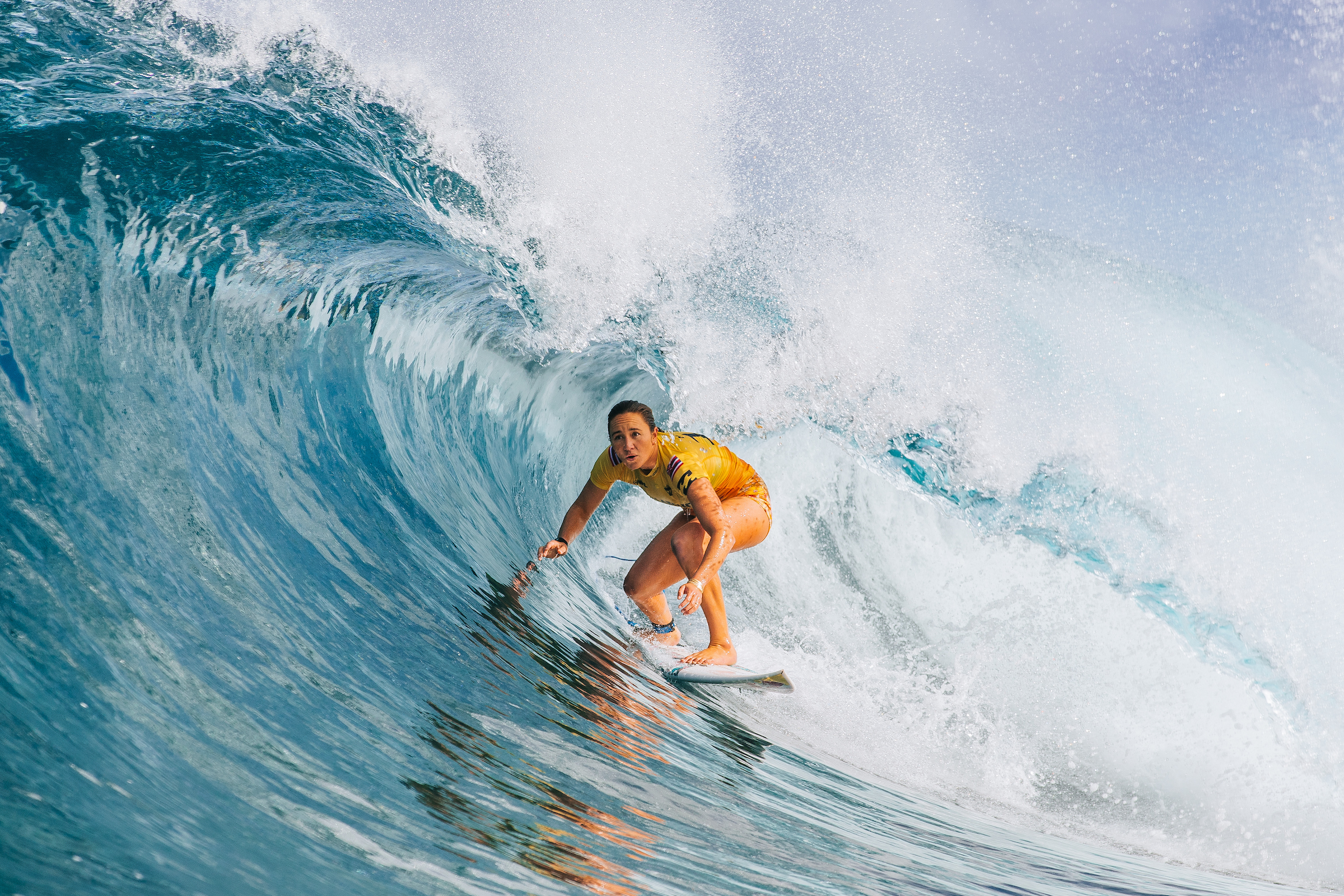 The first stop of the 2022 Tour–the Billabong Pro Pipeline–got off to an entertaining start this weekend, with the opening rounds of the men’s draw getting underway on Saturday and the women competing in a historic Pipe-‘CT-debut yesterday.  Timing a solid swell perfectly, the start of the new season began with a bang and left competitive surf fans far and wide ready for more action. While today has been called a lay day, hit play below or above to rewatch the weekend’s most exciting heats and continue reading for a breakdown of the women’s performance yesterday, courtesy of the WSL:

The competition ran through Women’s Opening Round 1 and Elimination Round 2 and showcased standout performances, as well as saw two big names fall out of the draw.

Local charger and event wildcard Moana Jones Wong (HAW) was one of the few surfers to keep her focus on the lefts of Banzai Pipeline and her strategy paid off as she put together a combination of two scores to narrowly beat five-time WSL Champion Carissa Moore (HAW) and Brisa Hennessy (CRI).

“I started surfing Pipe when I was 12, and I’ve been coming here consistently since I was 18,” said Wong. “Surfing against Carissa pushes me to be better because she’s the best in the world. I look up to her and I want to surf as good as she can.”

Hawaiian rookie Bettylou Sakura Johnson (HAW) dominated the final heat of Opening Round 1 with commitment at Backdoor as she took down Lakey Peterson (USA) in second place and sent World No. 6 Caroline Marks (USA) into the treacherous Elimination Round.

Heat 2 was stacked with local talent featuring Tatiana Weston-Webb (BRA), Malia Manuel (HAW), and Gabriela Bryan (HAW), all hailing from the island of Kauai. Manuel opted to go right and was searching for a wave at Backdoor, while Weston-Webb and Bryan looked for opportunities at Pipeline. Manuel’s patience finally paid off with five minutes left on the clock when she scored an excellent 8.17 (out of a possible 10) for a deep Backdoor barrel and secured her spot in the Round of 16.

“To be honest I was super stressed, I wanted to alleviate that by catching a few waves and kind just getting the ball rolling,” said Manuel. “I’ve spent a lot of time out there this winter, it’s my first real winter here at Pipeline and I had such a good crew and great support. It’s really hard to get waves out there to practice so it doesn’t matter how much time you spend out there, sometimes it all comes down to being in the right spot.”

Two-time WSL Champion Tyler Wright (AUS) and CT rookie India Robinson (AUS) had a walk-through heat as Stephanie Gilmore (AUS) wasn’t able to compete as she entered the WSL COVID-19 Health and Safety Protocols. Wright pulled the trigger first with a good tube on Backdoor for an early lead and solidified with perfect positioning on a second right-hand barrel to build momentum and confidence heading into the third round.

“The most exciting thing for me this year is seeing all the rookies,” said Wright. “It’s been a long time since we’ve had such fresh faces on the tour, and it makes me emotional just seeing how they’re coming in and making the most of it. It feels incredible to be a part of this sport and to be a woman in sport right now.”

The first Elimination Round heat featured international surfing icon Bethany Hamilton (HAW), who got the last-minute call to replace Gilmore. Hamilton had a tough matchup with seasoned competitors Brisa Hennessy (CRI) and Caroline Marks (USA) completing the roster. Hennessy built on momentum from her previous matchup and scored a couple of nice waves to take the first position and Hamilton used her wealth of experience to advance in second, eliminating Marks from the competition.

“I’m so stoked to be here,” said Hamilton. “I’m in full mommy mode lately but trying to keep my surfing shape, so it’s amazing to have the opportunity to be here today. There is also such great energy on the beach, everybody showing love.”

All Rookies Through to Round of 16, Americans Marks and Conlogue Eliminated Early

The first heat of the Women’s Opening Round didn’t disappoint with CT rookie Molly Picklum (AUS) taking the win ahead of CT veterans Sally Fitzgibbons (AUS) and Courtney Conlogue (USA). Fitzgibbons found a buzzer-beater to send Conlogue into the Elimination Round.

“I struggled to sleep last night because I was so excited,” said Picklum. “It feels amazing to win the first heat. Every heat is the same for me so it’s good to know that my plan worked and take the momentum through the event.”

In the day’s final heat, Heat 2 of Elimination Round 2, rookies Gabriela Bryan(HAW) and Luana Silva (HAW) took on Conlogue for the last two spots into the Round of 16. As the swell continued to slow down a battle ensued in smaller lefts and rights and the two Hawaiians powered their way with turns and cover-ups to eliminate the veteran Conlogue and keep their hopes alive in the year’s opening event.

“I was just trying to complete every wave that came my way,” Silva who ended up in first stated. “It’s definitely a confidence boost knowing you can beat surfers as good as Courtney, and I guess there was a bit of a cat and mouse game at the end there, I’m just happy to get through.”