What Do Surfing, Conspiracy Theories and Radioactive Squirrels Have In Common? 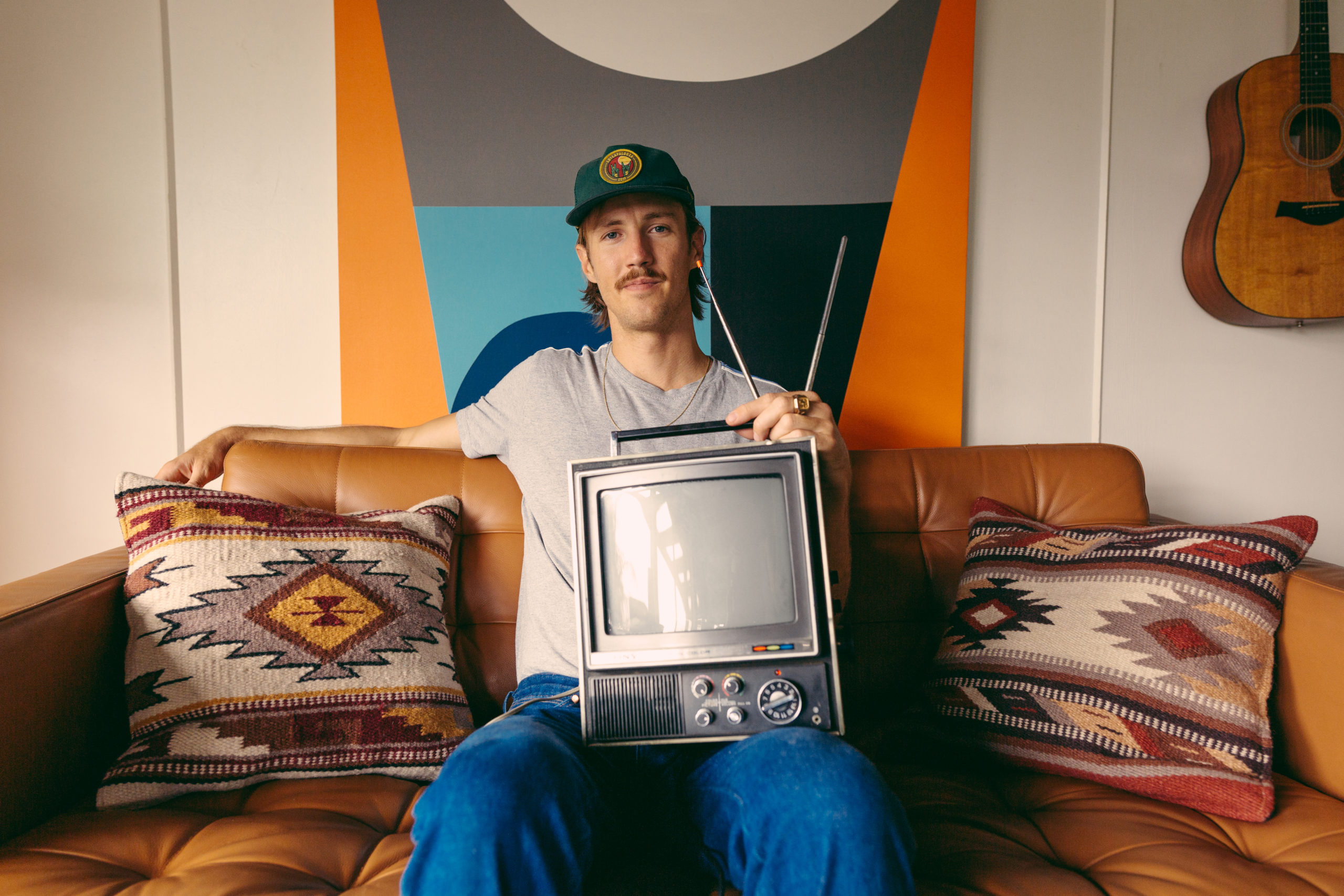 With a laundry list of existential threats, both real and imagined, currently bearing down on the world — from the very real global pandemic and climate crisis to the very imagined conspiracies about Bill Gates wanting to implant every living human with a microchip and manipulate them with diabolical 5G — the framing of information online, more than ever, can seem hyperbolic. And when messages about said threats are amplified through a 24-hour news cycle, filtered through political punditry and distorted through social media to make it seem even more compelling, well…it can be hard to look away.

It’s that undeniably potent hybrid of infotainment that filmmaker Evan Adamson has blended with compelling surf content to create “Stoke Wars”, a satirical, surreal, quasi-episodic series and media-channel launching today. With “Stoke Wars”, Adamson, a veteran of the distinctively underground Texas-surf community and longtime San Onofre interloper, shines a light on the captivating surfing being done in and around San O, while also giving voice to the myriad existential threats facing the popular surf zone, from pervasive crowds and a lack of surf etiquette to the cache of spent fuel cells at nearby SONGS and radioactive squirrels (seriously!).

Indeed, “Stoke Wars” owes as much to the current state of sensationalist (even conspiratorial) media, as it does to surf cinema — though the latter is well represented. Adamson’s project enlists a star-studded cast of San O-frequenters including Tommy Witt, Andy Neiblas, Dane Gudauskas, Lola Mignot, Karina Rozunko, Corey Colapinto and more to both inform and enthrall.

The prologue to “Stoke Wars” (which you can watch above) offers an entertaining yet disorienting preview of what Adamson’s created.

“The prologue is meant to establish the [“Stoke Wars”] universe but still leave a lot of mystery,” he says. “There’s meant to be a lot of parallels to the world we’re living in right now where there’s so much information out there, hitting you from every angle, and you’re not quite sure what to believe. But the goal is to highlight some very real and important environmental and societal issues.”

As a project, “Stoke Wars” wild creativity — stochastic cinematography, paranoia-inducing “news” reels with sensationalist chyrons, interspersed with hot surfing footage aplenty — seems to be matched only by its ambition; there’s even an original score contributed by Nick Weiller, better known by his producer name Bro Safari.

We caught up with Adamson to talk about the universe he’s created, its genesis and inspiration, as well as the pressing issues facing the San O surf community — our conversation eventually arrived at radioactive squirrels, of course. 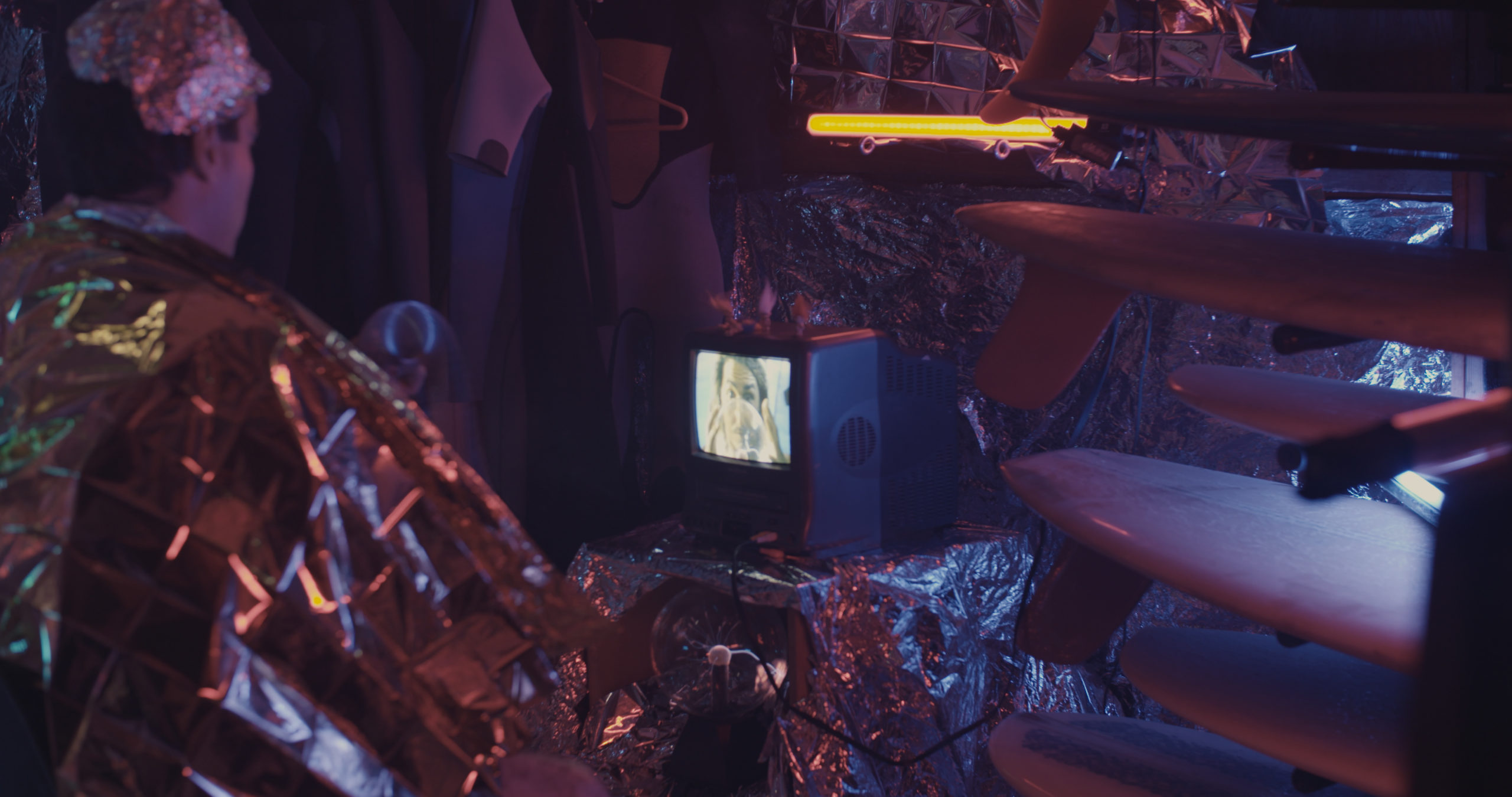 A lot to unpack here. Let’s talk about the mission of “Stoke Wars”. What are you hoping to accomplish with this project?

I want to create this universe of content that’s fresh and different but also entertaining, while highlighting important issues that people can take action on. I didn’t want to do it in a preachy way. People don’t seem to respond well to that approach. I really just wanted to do something different. I’d been personally bored with a lot of the surf content out there these days. I want to raise the universal stoke of everybody and inform at the same time.

The project will be equal parts narrative and surfing. I’ve created a bonkers sci-fi world with a pretty thick plot, some hilarious characters, intense action, and plush with homages and parodies. I intend for this to be just as dark or weird as it is tongue-in-cheek or funny.

Like a lot of media these days, “Stoke Wars” seems to be trying to stoke (pun intended) fear, or at least draw ire toward an existential threat. Are you a consumer of mainstream media? Did you draw inspiration from that or from fringe outlets?

I’m definitely drawing inspiration from crazy stuff like Alex Jones, but meshed with more mainstream media-fear-mongering. I feel like the mainstream media, and even stuff that’s not mainstream, there might be some truth to what’s being said, but the way it’s being delivered is so sensationalist and hyperbolic. They’re not offering real solutions. I would like this platform to provide some hope and offer actionable ways for people to get involved. 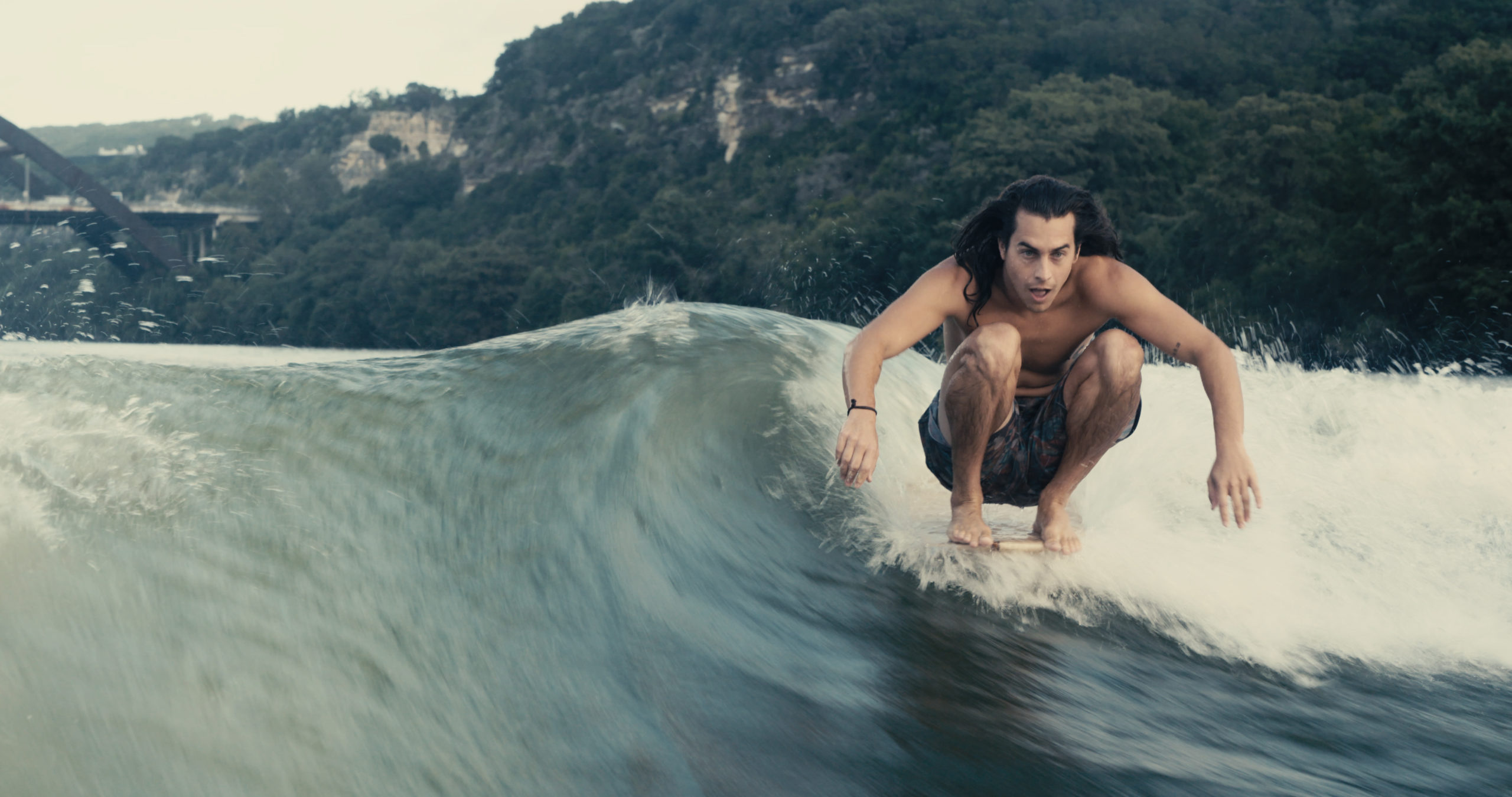 Tegan Gainan, conspiring to rack up some tip time.

And what will “Stoke Wars” teach us about the environmental threats facing the surf community?

Well, first of all, we’re really focused on San O. And we wanted to address the nuclear waste being stored there. A lot of people don’t realize that it’s a real issue. We’re putting this kind of sci-fi spin on it to kind of make it more digestible. We’re working with a handful of surfers who are really working on this issue and trying to get the waste removed from there. So they helped us identify some actionable items, the proper petitions to sign, etc. Beyond that, we’ll be addressing single-use plastics and the recycling process, toxic sunscreen, the unsanctioned dumping of chemicals and sustainable agricultural practices. I think people are maybe turned off by the more plain and dry informative media about many of these topics. So I wanted to have fun with it and make it entertaining. Even if you’re not an environmental activist, you can be informed about this issue.

What about radioactive squirrels? Are they a real concern there in San O?

They are, yes. After years of the squirrels eating Flaming Hot Cheetos and Fruit Loops and being so close to the radiation, they’ve been breeding in insane numbers and getting more ballsy everyday. And there’s a threat of radioactive sharks, as well. San O lineups are more crowded than ever. Even on days when it’s flat. If all these people were aware of these dangers, maybe they’d take action to change things. 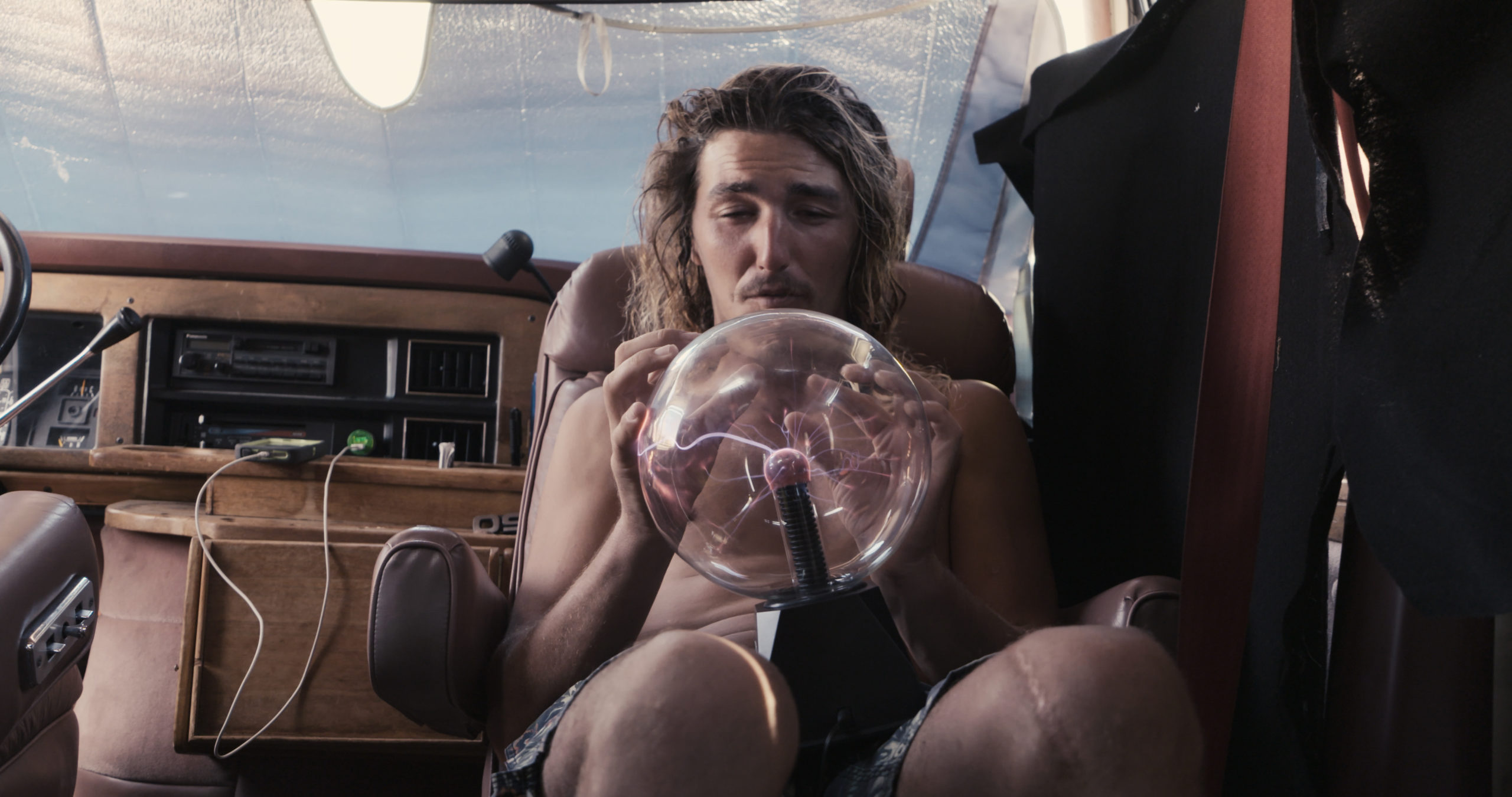 Shane MacPherson knows that the truth is out there. Or maybe its in here. You know, in this orb.

Speaking of crowds, “Stoke Wars” also dedicates some time to surf etiquette. A threat as well?

We want to create a safer lineup. There can be a difference between being a beginner and a kook. You can be an informed beginner. We want to highlight surf etiquette in a fun, digestible way, as well. And we want to provide information that beginners can use and feel empowered to surf safely in a crowd.

You’ve got a super intriguing roster of guests lined up. Who should we look forward to hearing from in the coming weeks? And how do choose your guests for “Stoke Wars”?

“Stoke Wars” was initially inspired by the surfing of guys like Tommy Witt and Andy Neiblas — surfers who have that kind of sporadic, spontaneous style where you never quite know what they’re going to do. They’re so exciting to watch. Their surfing kind of seeded the idea of the radioactive surfer — the freakishly talented surfer — which we play around with in “Stoke Wars”. Throughout my years filming at San O, I’ve stacked a ton of footage of a lot of other surfers. I’ve ended up with a crackpot crew of really great surfers. The end result, I think, is some exciting, fresh surf content that hits you on all levels, with sound, surfing and story. 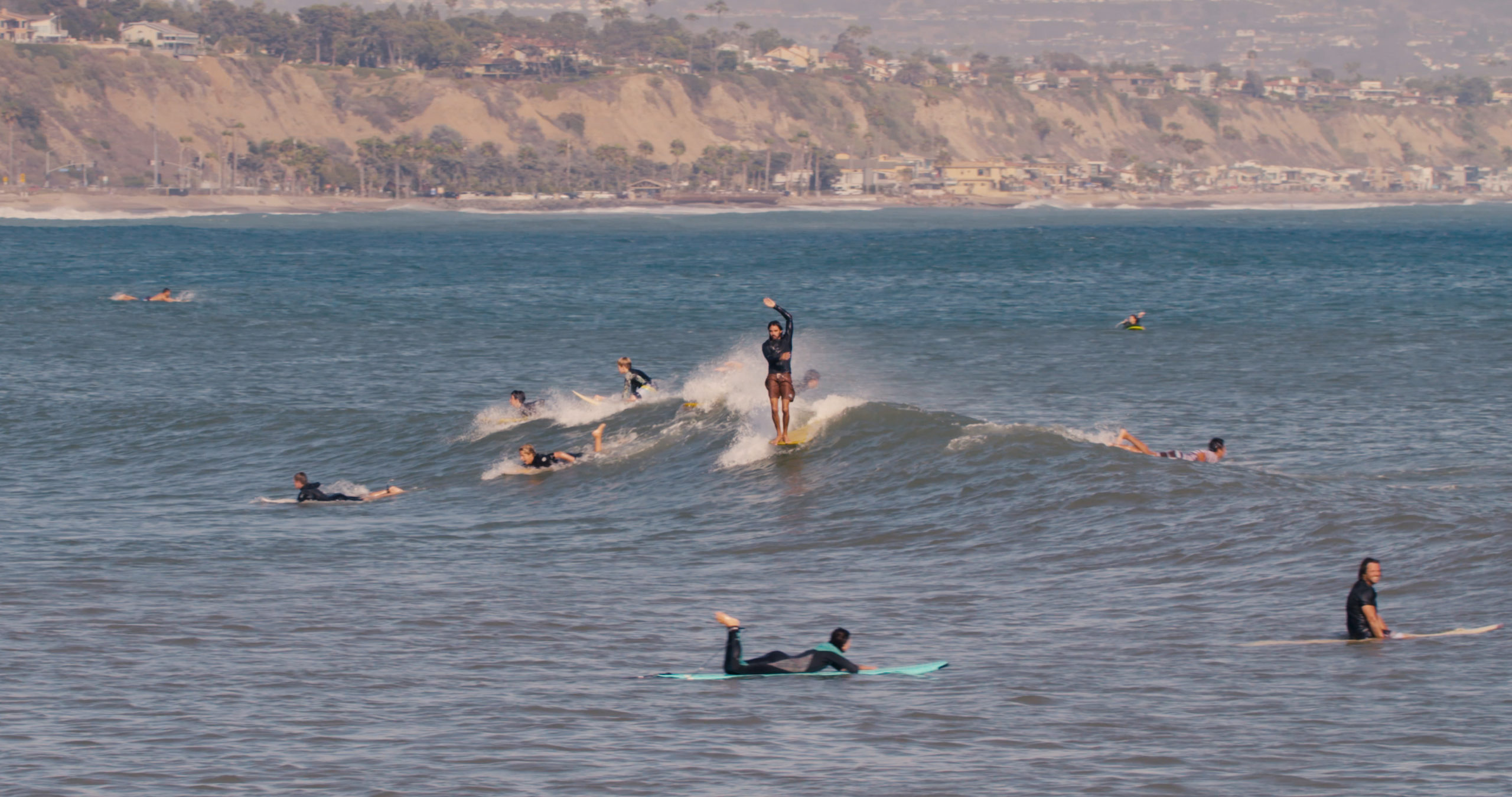 Some say Andy Nieblas was born with incredibly unique style. Others say it’s the radiation.