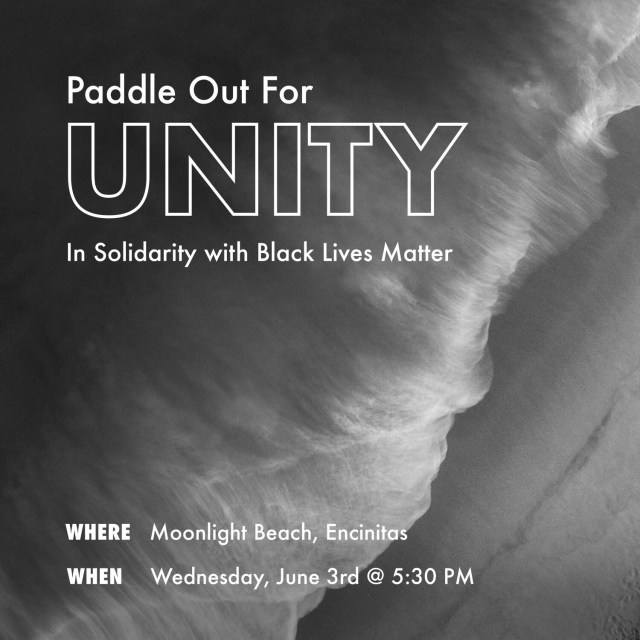 Today at 5:30 p.m. in Encinitas, California, hundreds of surfers are expected to fill Moonlight Beach for the “Paddle Out for Unity in Solidarity with Black Lives Matter.” Surfers will spell out the word “unity” with their surfboards on the beach before paddling into the water to honor the lives lost to police brutality and systemic racism in America.

The event is being organized by Textured Waves, Kindhumans Movement, Changing Tides Foundation, and Sal Masekela. Two out of the three organizations were co-founded by black surfers, and Sal Masekela has long been a spokesman for underrepresented groups within the surf community. Still, a political mobilization of surfers in the name of racial solidarity brings attention to an issue that is not often discussed and even more rarely acted upon in surf culture: black people are dramatically underrepresented in the lineup.

This fact is what spurred Danielle Black Lyons and her three co-founders to start Textured Waves, a group that aims to lift stories, images, and voices of surfing women of color. “We just didn’t see ourselves represented in any surf media, social media, really anywhere,” says Black Lyons. “There was one image we continuously saw — the white savior pushing black children into waves — and that was not our experience. It’s a beautiful image, but it’s not the only image out there. We wanted to spread a message that there are actually people of color who do surf.”

Black Lyons, who lives in Oceanside and is in the water every day, says she is almost always the only black person, and certainly the only black woman, in the water where she surfs. This dearth of participation in surfing by people of color is a byproduct of America’s long history of systemic racism. In the ‘60s, Jim Crow laws prohibited black people from going to certain “public” spaces, including swimming beaches and pools. The effects of this lack of access are still seen today. As black people were discouraged from aquatic activities, they could not expose their children to aquatic sports, which meant the next generation generally did not either. “It’s cyclical, and it’s going to take generations to fix,” says Black Lyons.

Representation of black surfers, in the water and in the media, is crucial to spreading the sport to people of color, especially children. If you don’t see anyone who looks like you participating in an activity, it’s more difficult to imagine yourself being able to — or even express that you want to — participate. “Representation is everything,” says Masekela. “If you see someone who looks like you doing something, then you know that you can do it. That’s the bottom line — being able to know that you can do that, too.”

“If you’re a person of color it’s absolutely a thing,” says Black Lyons. “You’re out there in the water and you’re probably only one or one of two out there representing whatever race you might be. I grew up in the ‘80s and there wasn’t any visual there for me, and that visual is so powerful.” 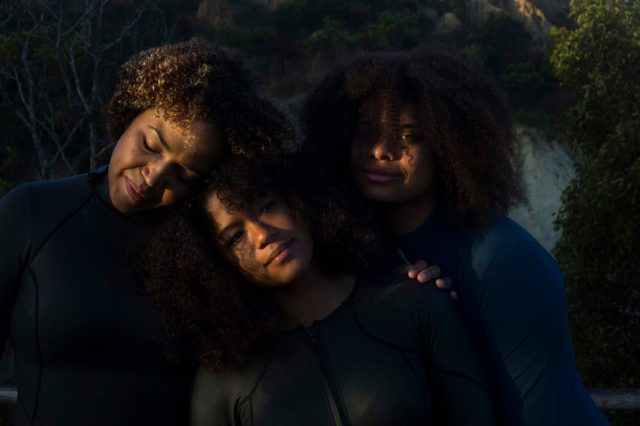 Passively and actively, American surfing has perpetuated a culture that does not reflect the diversity of the country and the experience of all of its people. But the organizers of the Paddle Out for Unity see this as an opportunity to catalyze a real, positive change in the surfing community, that may have already begun but at too slow a pace.
“We need to acknowledge our history, and we need to acknowledge that there is a reason that there are so few black surfers,” says Justin Wilkenfeld, who founded the Kindhumans Movement with his wife. “It’s a time to look in the mirror. Right now our country needs to take a good, hard look in the mirror and ask itself why things are the way they are, and then each person needs to ask, ‘Am I complicit in some way?’”

“The call to action at this event is to gather, to grieve, and to offer education and outlets for people to navigate their way through this process,” says Black Lyons. Attendees will receive pledge cards where they can fill out what they will do to be an advocate and an ally for black people in the battle against racial injustice.

In a country reeling from hundreds of years of violence inflicted upon black people, most recently brought to the public forefront by a series of brutal acts that included the murder of George Floyd by Minneapolis police on May 25, this paddle out will also serve the more traditional ceremonial purpose: to be a place to grieve, and to heal.

“A paddle out is our way of showing respect to those who have passed,” says Black Lyons. “The ocean is where surfers find our peace, there’s no better place for us to go to hold this space to the lives that have been lost.” 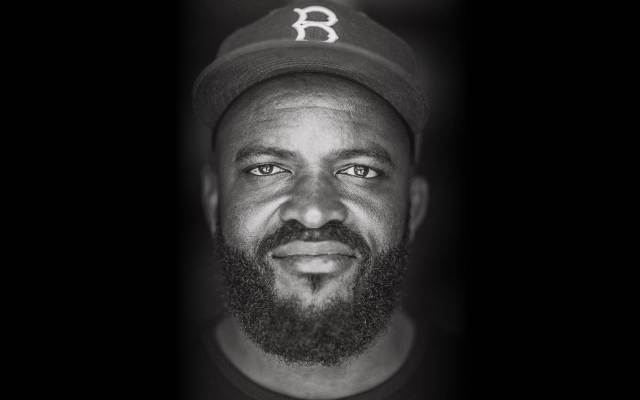 “For the first time ever in my life, no one can hide from this question of inequality and race in America,” says Masekela.

After the sun sets over Moonlight Beach this evening, however, it will be up to each surfer to ensure that their show of solidarity was not in fact just a show. In the water and on land, the work will have only begun. The false notion that the surfing space is an enlightened oasis that transcends issues of racial inequity is currently being dismantled, and it will be up to all surfers to rebuild a better, more diverse culture.

Within surfing, Black Lyons suggests beginning by supporting black and minority surfing organizations, a list of which are on the Textured Waves resources page. “If you have a platform, use it to actually promote people of color,” she adds. “Be more welcoming to new faces in the lineup. We’re all territorial, but the ocean belongs to no one, it’s everyone’s space.”

As tightly as we all wrap our identities in surfing, we all have a larger role to play in fixing our country’s systemic racism. “Give back to your community, make this your problem, make this our problem,” says Wilkenfeld. Masekela adds, “Challenge those around you within your community, have those tough conversations, and recommend the information and the reading to help them to realize that, whether they like it or not, this is a problem that affects us all.”

Paddle outs are most often held to honor a life that has ended. They offer closure. But for those who will gather and demonstrate this evening, and surfers around the world who might participate in similar events in the near future, let this moment not close a chapter, but start a new one. As Wilkenfeld put it, “Act now, but don’t forget to act later.”