While You Were Sleeping: The Corona J-Bay Open is Officially Underway 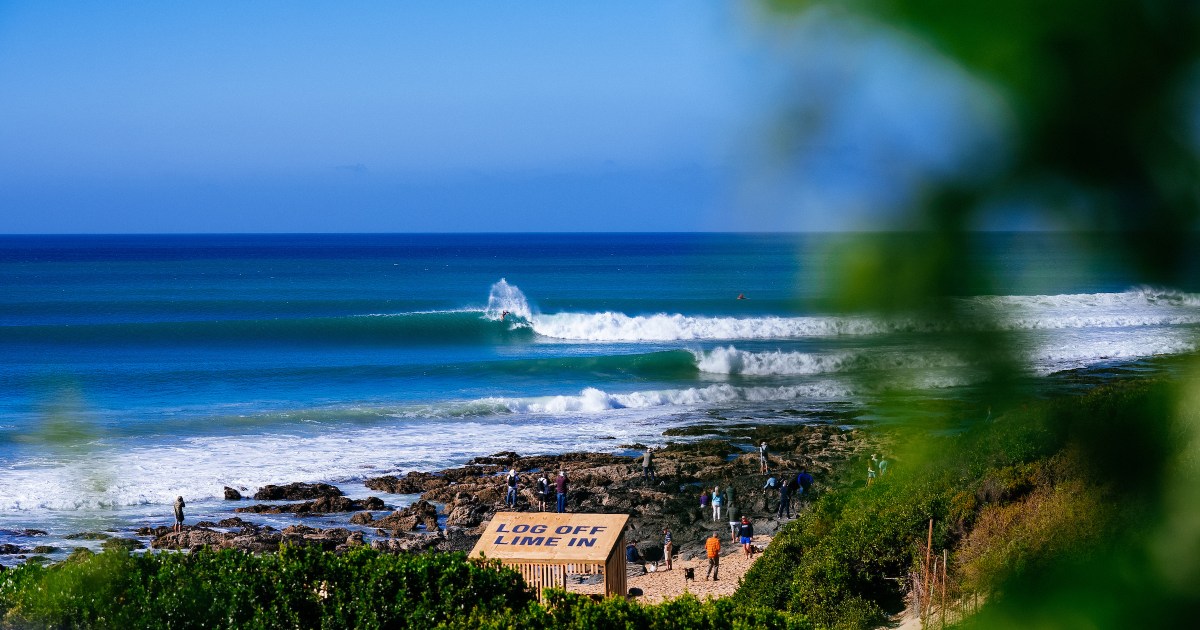 Last night (PST), the Corona J-Bay Open officially got underway with final-5-implication shake-ups already in the mix. World No. 3 Lakey Peterson was ousted by Tyler Wright and will have to fight to maintain her top spot going into Tahiti. Johanne Defay secured her spot at Trestles, and on the men’s side, many top seeds have been relegated to the elimination round, hopefully to run this evening. Click above to watch a replay of the day’s highlights and stay tuned for the next call.

Continue on for more from the WSL:

The Corona Open J-Bay, Stop No. 9 on the World Surf League (WSL) 2022 Championship Tour (CT), opened today with clean three-to-five foot waves at the world-famous Supertubes in the Eastern Cape of South Africa. The competition completed the women’s and men’s Opening Rounds, and eliminated the first four surfers in Women’s Elimination Round 2.

Following the Mid-season Cut, the competition is relentless with numerous top seeds landing in the Elimination Round with the fear of an early 9th-place exit from the Corona Open J-Bay. World No. 2 Johanne Defay, No. 3 Lakey Peterson (USA), and No. 4 Stephanie Gilmore (AUS) were all relegated to Elimination Round 2. Defay was the only surfer today to clinch a spot in the WSL Final 5, while Peterson was the only surfer within the Top 5 to be dispatched from the competition.

Johanne Defay (FRA) clinched her spot in the WSL Final 5 after winning her Elimination Round heat against Tia Blanco (USA) with powerful turns and committed surfing onto the dry rock.

“It’s such a great day, there are magnificent waves and it’s good to get going,” said Defay. “I almost feel lucky that I got to surf two heats today, I just wish I could get some higher scores. It’s the kind of wave that you can’t train for when there aren’t any waves, so today’s the first time we can really figure out our equipment. I’m just getting started.”

Defay, who had to make alternative arrangements for equipment after arriving in South Africa without her luggage, was elated to hear she’ll be competing in the Rip Curl WSL Finals in Lower Trestles from September 8 – 16, 2022: “No way, my heart! I didn’t know it. That’s so cool. I wasn’t expecting this, I’m quite emotional.”

World No. 3 Lakey Peterson (USA) and Tyler Wright (AUS) had a slow heat in the late afternoon as only two sets rolled through during the 35-minutes with three waves ridden in total. It was heartbreak for Peterson, who could only score one mid-range ride, while Wright managed to find a backup wave to increase her lead and move on to the Quarterfinals. Peterson will look ahead to the Outerknown Tahiti Pro to make up lost ground to secure a place in the Rip Curl WSL Finals.

World Champions Moore and Gilmore Through to Quarterfinals

Much like Defay, seven-time World Champion Stephanie Gilmore (AUS) capitalized on the added time spent in the lineup as she found her next gear and posted a big heat win over Courtney Conlogue (USA). The stylish regular-foot nailed her wave selection to perfection and scored four very good waves around the seven-point mark.

“This morning was just tough, that devil wind is always pretty hard to surf in,” Gilmore said. “When I paddled out it was glassy and by the time our heat started it was windy and I was on the wrong board. I’ve been watching these beautiful waves all day and I was just so excited to get back out there this afternoon. I changed my board for something with a little more drive and it felt like I could really hold my line so that was a really good feeling.”

Five-time World Champion Carissa Moore (HAW) took out the superheat of the women’s Opening Round, battling with rookie Gabriela Bryan (HAW) and event wildcard Blanco. The two Hawaiians went blow-for-blow with a similar approach to surf the long and perfect walls of J-Bay. The current World No.1 laid down her signature carves and brought a lot of power and variety to build an impressive 14.50 heat total, which included the first excellent score of the day (8.17 out of 10), and advance into the Quarterfinals.

“I’m so excited to be back here at Jeffreys Bay,” defending event champion Moore said. “It’s been three years since we’ve been to this magical place and we’re very lucky that the waves showed up this morning. It’s been a little tough to practice and warm up for this event, there haven’t been many opportunities so there was a lot going on in this first heat.”

Loud cheers erupted from the beach whenever local hero Matthew McGillivray (RSA) took off on a wave. The South African had a quick start to post the first score on the board with a strong two-turn combination, wrapping carves and a short tube ride to set the tone for the heat. Griffin Colapinto (USA) was right behind McGillivray and it was game on. McGillivray caught a bigger set wave, unleashing huge turns in the most critical part of the wave to score an excellent 8.50 (out of a possible 10). He held onto the lead over Colapinto and Jadson Andre (BRA) to take the win with one of the highest heat totals of the day, 15.33 (out of a possible 20), and advance to the Round of 16.

“It’s an incredible day here, the waves are getting better and better,” said McGillivray. “I couldn’t be happier to be here, it’s going to be such an exciting day of surfing. I feel like the Opening Round heat is just a warm-up to make sure you’re on the right equipment and picking the right waves. I’m happy to get a win under my belt and use that momentum going forward. It’s incredible to have so much support on the beach. I wasn’t expecting such a big crowd, all my friends and family are down here, it’s such a cool atmosphere.”

Another fired-up South African was wildcard Luke Thompson (RSA) who earned the right to compete this week courtesy of a big result on the Challenger Series in Ballito. Thompson took the lineup by storm and threatened Jack Robinson (AUS) and Kolohe Andino (USA) of relegation to the Elimination Round with fast and sharp surfing, and an undeniable element of flow.

The two-time winner this season and current World No.2 Robinson was able to catch up and overtake the young South African on his last wave but there is no doubt the wildcard will be dangerous to match up with in the Elimination Round.

Injury replacement Yago Dora (BRA) delivered the first upset of the day when he relegated CT veteran and two-time event winner Jordy Smith (RSA) and World No. 3 Italo Ferreira (BRA) to the Elimination Round.

“I knew I could get the score if I was on the right wave,” said Dora. “The best wave of the heat came at the perfect time for me and I just had to surf my best. It’s just a pleasure to surf waves like this against guys like Italo who has one of the best backhands, and you don’t even have to say anything about Jordy. He’s incredible and I’ve been a fan since I was a little kid so it was an honour to surf against them.”