Why Do Waves Glow During Red Tide, Exactly? 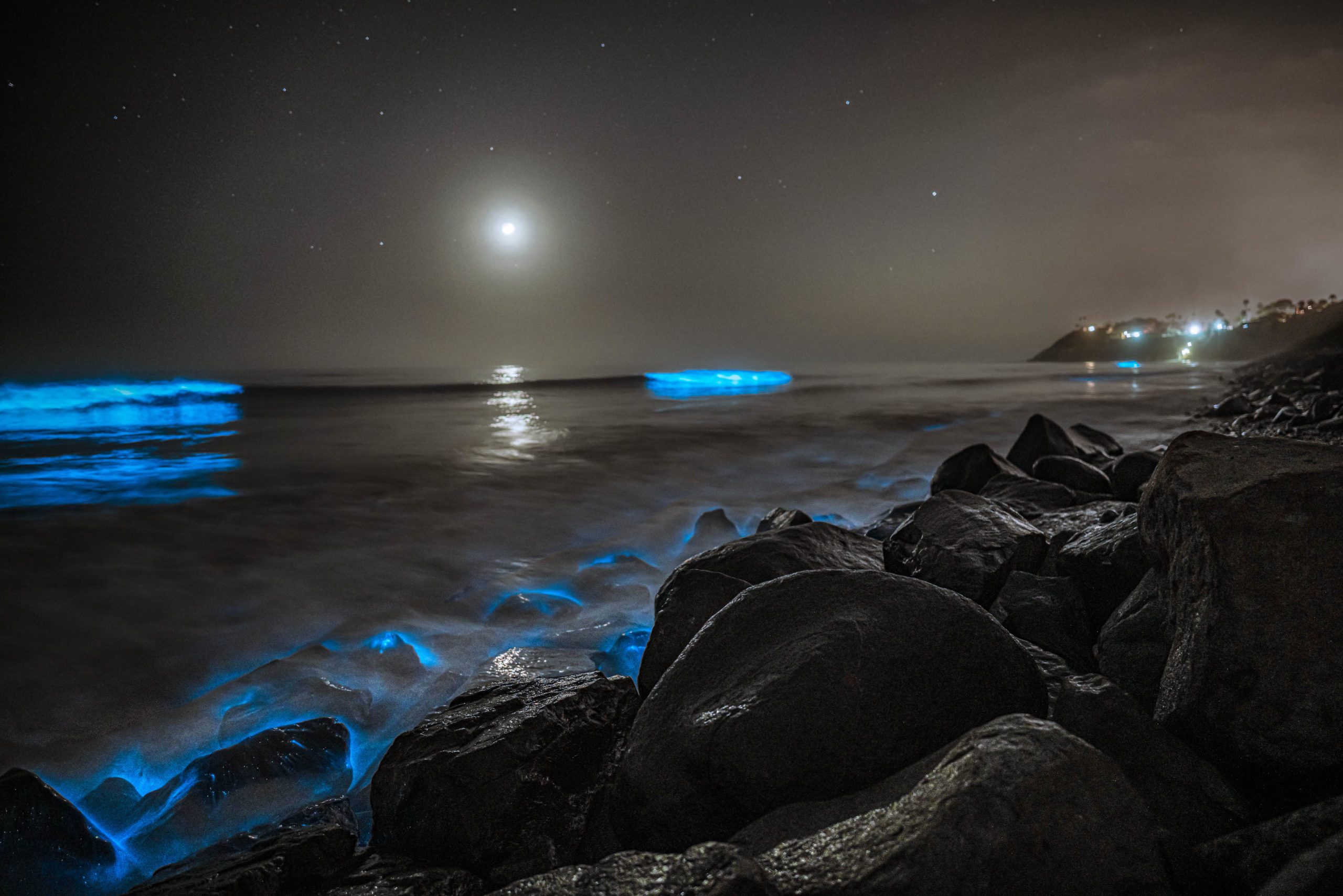 Every so often, our coastal waters take on a peculiar shade of rusty brown or burnt burgundy – indicating what is known as a “red tide”. The ocean becomes uncharacteristically murky, sometimes accompanied by a soupy consistency, and at night the waves take on a psychedelic shade of blue that seems to glow in the dark.

In simplest terms, a red tide or ‘harmful algae bloom’ (HAB) occurs when colonies of algae get just the right amount of nutrients and sunlight to grow at a rapid rate along the coastline. The more discolored the water, the more these microorganisms have proliferated and the denser the colony.

But not all red tides are created equal – many are harmless, some toxic only to animals, and in less common cases, dangerous to humans as well. Florida, for example, has experienced red tides known to produce an airborne toxin capable of having harmful respiratory and neurological impacts if inhaled. In northern California, there have been HABs that produced record-breaking toxins, contaminating the area’s wild-caught seafood and causing several fisheries to shut down.

Within the last two weeks, the coastlines of southern California have experienced an especially vibrant red tide, accompanied by some of the most electric bioluminescent nights the city has seen in years. In order to find out more about the tiny organisms causing this phenomenon, what makes the waves to glow at night and whether or not a red tide could be harmful to surfers, we reached out to a couple of experts in the field: UCSC professor Dr. Raphael Kudela, who’s focused a large part of his research on monitoring water quality, phytoplankton population dynamics and harmful algae blooms; and Dr. Alexis Fischer, a research associate and surfer at UCSC.

What can exacerbate a red tide?

Raphael Kudela: The red tides you’re getting [in San Diego] are pretty common, and they mostly show up when it’s really hot and it has rained – which is exactly what happened. We’ve looked at it in experimental conditions, and this particular type of dinoflagellate (algae) likes nutrients that are in runoff, and it really likes nice warm temperature sunny days. That pretty much describes SD right now.

Aside from the fact that some beaches are closed right now due to the pandemic (and surfing might be off-limits for a bit in certain areas), when is it not OK to get in the water during a red tide?

RK: The only organism that could produce a red tide that would be super dangerous would be Alexandrium [which] causes paralytic shellfish poisoning. As far as I know, we haven’t seen a true red tide of Alexandrium since around 1991.

Should surfers be worried about anything with red tides?

RK: We have talked to surfers, some that got contact rashes or surfer’s itch, and some of that is probably because red tide is putting out lots of proteins and other things. And you can develop an allergic reaction to things like that if you’re exposed to it over a number of years. The fact that surfers are in the water so much – we think some of this is that surfers can develop a sensitivity to stuff in the water. But in general, getting in contact with the red tide [in CA] is not going to do much to you.

How are red tides connected to bioluminescence?

Alexis Fischer: This particular type of phytoplankton produces bioluminescence when it’s agitated. These flashes cause a startle response in their predators, and so is thought to be a predator avoidance behavior. However, any sort of mechanical stress, like waves, can also trigger the luminescence.

How do we know if a red tide really is harmful?

AF: The state of CA has a pretty good monitoring program for harmful algal bloom (HAB) toxicity using mussels. Mussels are filter feeders that eat algae, and algal toxins bioaccumulate in their flesh, so they are a great way for us to measure toxicity in the marine environment. To do this, bags of mussels are hung at various points of interest all along the CA coast and every week, some of those mussels are harvested. Mussel flesh is ground up and then tested for a bunch of different HAB toxins.

The central and northern CA coastal ocean observing system (CeNCOOS) and the southern CA ocean observing system (SCCOOS) help integrate and publicly distribute a suite of oceanographic measurements from all along the coast. These measurements include a weekly time series of toxicity and phytoplankton data, which allow state, county and local officials to make a decision on whether or not to close down fisheries, beaches, etc.

Typically, this occurs when toxin concentrations exceed a certain threshold. This information is readily disseminated to the public, so if you haven’t heard anything, that’s good news!

RK: Typically it’s a couple of weeks, which is a normal time scale for things in the coastal ocean. If the weather doesn’t change, it would be however long it takes for [the algae] to run out of nutrients. But it could last longer. Sometimes what happens is you’ll get a big bloom going and you’ll get just enough runoff to keep it going, so then it can last a couple of months. As long as it’s nice and hot it’ll probably be hanging around for a while.