Why Surfers Should Vote For Joe Biden and Kamala Harris 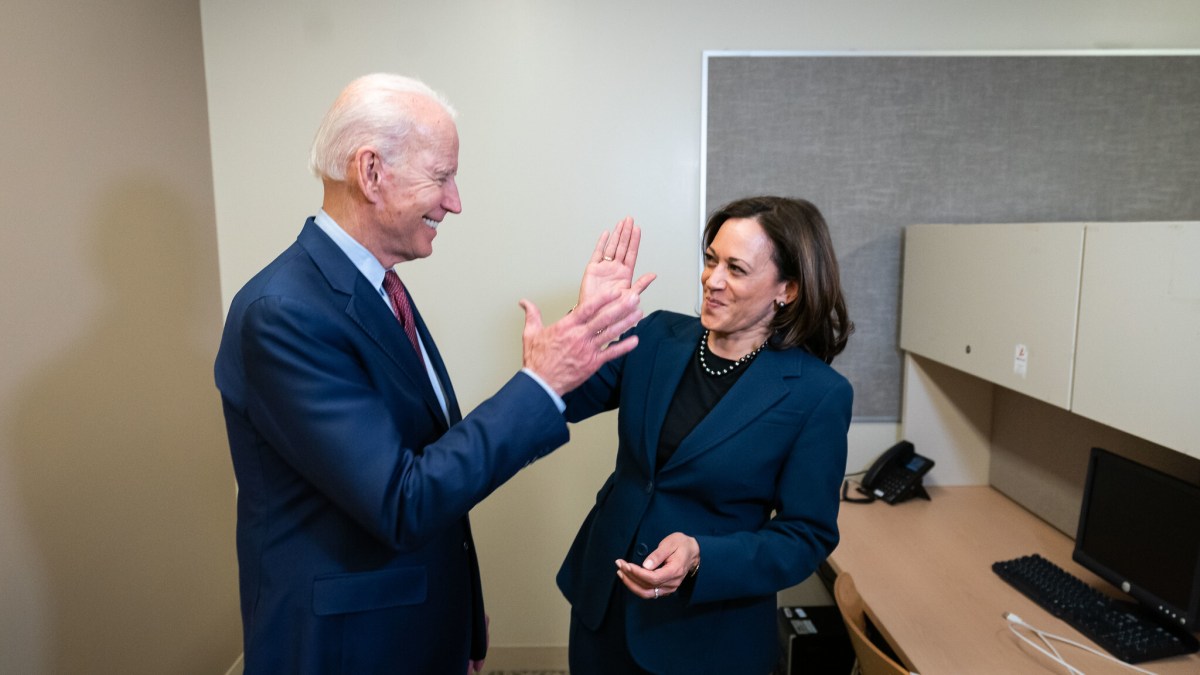 What a time to be an American surfer. If you live on the West Coast, you’ve probably had to skip some sessions recently as smoke from record-breaking wildfires choked your local lineup. If you live on the East Coast or Gulf Coast, you’ve likely seen some coastal property damage amid a hurricane season so active that they literally ran out of names for storms. And regardless of which coast you call home, you likely haven’t traveled too far from it for waves recently, considering few other countries will accept us after our federal government’s failure to contain the spread of COVID-19.

In other words, it sucks to be a surfer in America right now. Things suck for everyone, not just surfers, of course, but since this is SURFER.com, we’re talking specifically about how it sucks for surfers, and what can be done in this year’s presidential election to mitigate the suckage moving forward. And while “keep politics out of surfing” has become a common refrain on social media these days, the fact is that what’s happening in American politics has everything to do with surfing. That’s why for the first time in this publication’s 60-year history, we’re endorsing a presidential ticket—the ticket for Joe Biden and Kamala Harris.

Why Biden/Harris and not 4 more years of Donald Trump and Mike Pence? Well, there are a whole lot of worthy reasons, from Trump’s history of racism and refusal to denounce white supremacy to his rejection of democratic values to his inability to speak truthfully, but you’ve probably read about that elsewhere (and if you haven’t, please follow those links). Instead, lets focus on the issues that most directly affect your life and future as an American surfer.

Remember surf trips? Me neither. Sure, it may only be 6 months since international travel restrictions first went into place to curb the spread of COVID, but quarantine months may as well be dog years and it feels like a goddamn lifetime. No one could have guessed on inauguration day that Trump’s “America First” slogan would most accurately apply to the number of deaths our country would endure due to a raging pandemic, but here we are leading the world with more than 200,000. That grim statistic highlights the fact that Trump’s national response to the virus has been the worst of any wealthy nation on Earth. Between contradicting health experts, lying about the severity of the threat of COVID and empowering his completely unqualified son-in-law to create a federal response plan (which was reportedly dashed after his team realized COVID would hurt Democrat-run states the most), Trump has proven his gross incompetence time and again when it comes to leading the nation through crisis. This has undoubtedly affected your life in myriad ways, whether you’ve been impacted financially, become sick or lost a loved one from this terrible virus—the fact that your 2020 surf trip plans have probably been put on hold for the foreseeable future is small potatoes in comparison, sure, but it ain’t great either.

Biden and Harris have emphasized that they will listen to health experts and lead a federal response based on science. Their plan for combatting COVID includes increases in free testing and contact tracing, as well as free and equitable distribution of a vaccine once one is identified to be safe and effective by the Food and Drug Administration. They plan to follow the recommendations of the Centers for Disease Control and National Institutes of Health with things like mask mandates, and they pledge to more clearly communicate to the American people what we all need to do in order to get our numbers down—you know, so we can do things like travel abroad once again. And with a Biden presidency, we’d be a less likely to be caught off guard by another catastrophic pandemic in the future, as Biden has said that he’ll restore the White House National Security Council Directorate for Global Health Security and Biodefense, a program that existed specifically to predict and prevent pandemic threats like COVID-19 from wreaking havoc on the US—before Trump gave this early warning system the ax in 2018.

The second surf-related reason to cast a vote for Biden/Harris is the thing that’s fueling the aforementioned non-stop hurricanes and catastrophic wildfires. There was a particularly telling moment a few weeks back when Trump was visiting California amid the devastating start to the state’s wildfire season. When confronted by a state official about the link between climate change and the historic fires, Trump said, “It will start getting cooler, you just watch,” as well as, “I don’t think science knows, actually.”

The thing is, science does know. Each year, a grim new record is set for levels of carbon dioxide in our atmosphere. The Earth’s temperature is steadily increasing year after year, fueling more extreme weather events like hurricanes and floods and creating the conditions for apocalyptic fires from California to New South Wales to the Arctic Circle. In the next 20 years, between 70 and 90 percent of the world’s coral reefs are expected to disappear, with a complete coral extinction likely by 2100. Global sea levels are expected to rise as much as 8 feet in this century, with many coastal areas becoming permanently submerged and up to 171 million people facing coastal flooding from extreme high tides and storm surges. Whichever unfortunate souls are surfing then will have to learn to chop-hop to avoid the rubble of former low-lying coastal communities—that is, if seawalls haven’t eliminated surfable waves in those areas altogether.

And yet for the past 4 years, the Trump administration has been rolling back environmental regulations at a breakneck pace. As of July, the Trump administration had either undone or was in the process of undoing 100 rules regulating air pollutants and emissions, drilling and extraction, water pollution and much, much more. Trump appointed Andrew Wheeler, a lawyer who previously represented coal interests, as the Administrator of the Environmental Protection Agency. Since former oil lobbyist David Bernhardt’s appointment as the Secretary of the Interior, he’s announced plans to open up the Arctic National Wildlife Refuge for oil and gas leasing (click here to watch Patagonia’s great film on the battle over the fate of the Arctic National Wildlife Refuge and public lands more broadly). The foxes are truly watching the hen house under the Trump administration, and the result is a pro industry, pro fossil fuel government that will allow special interests to do whatever they please for the sake of shareholder value while the world careens toward destruction.

Biden and Harris acknowledge the existential threat of climate change and have said that on day one in office they’d rejoin the Paris Agreement to limit greenhouse gas emissions, which was left by Donald Trump in 2017. If elected, Biden and Harris plan to invest $2 trillion in jobs to build green infrastructure with the goal of transitioning the country’s electricity production to entirely renewable, zero-emission sources by 2035. They plan to upgrade 4 million buildings to the highest energy efficiency standards and add 500,000 charging stations for electric vehicles, while also investing in 250,000 jobs plugging oil and natural gas wells to reduce leakages and prevent further environmental damage from such sites. Biden and Harris’ ultimate goal is to get America on track to reach net zero greenhouse gas emissions by 2050.

Trump has claimed that the cost of these programs would be too high—as if there isn’t a cost to letting carbon emissions continue at the same rate, causing increasingly-devastating weather events and mass migrations. According to a study last year by the National Bureau of Economic Research, the U.S. could see its GDP fall by more than 10 percent due to the effects of climate change by 2100. Not to mention the costs we’re already seeing now, with the damage from weather disasters in 2018 and 2019 alone totaling an estimated $136 billion.

In theory, it certainly sounds nice to “keep politics out of surfing.” After all, these issues are complicated, it can be hard to cut through the webs of misinformation online, and when you do get to the truth about what’s at stake with an issue like climate change, you find that it’s equal parts depressing, terrifying and completely overwhelming. It’s a hell of a lot more fun to just tune it all out and go surfing. But it becomes a lot harder to ignore the impacts of politics on our surfing lives when we’re canceling surf trips due to pandemics, when our local lineups are choked with wildfire smoke or contaminated by industrial pollution, or when our homes are getting flattened by increasingly-powerful hurricanes. Because politics are already in surfing—they affect our surfing lives whether we want them there or not—so we may as well learn what we can about the issues and participate in the process in a way that aligns with our interests as surfers.

As far as the 2020 presidential race goes, Joe Biden and Kamala Harris are the candidates that best represent our interests of surfers, which is why SURFER is endorsing them. Are they the most-perfect, couldn’t-dream-up-a-better-ticket-if-you-tried candidates on these issues? We’ll be the first to say that they aren’t. But they’re a lot better than the alternative.

[Click here to register to vote or to check on your registration status.]