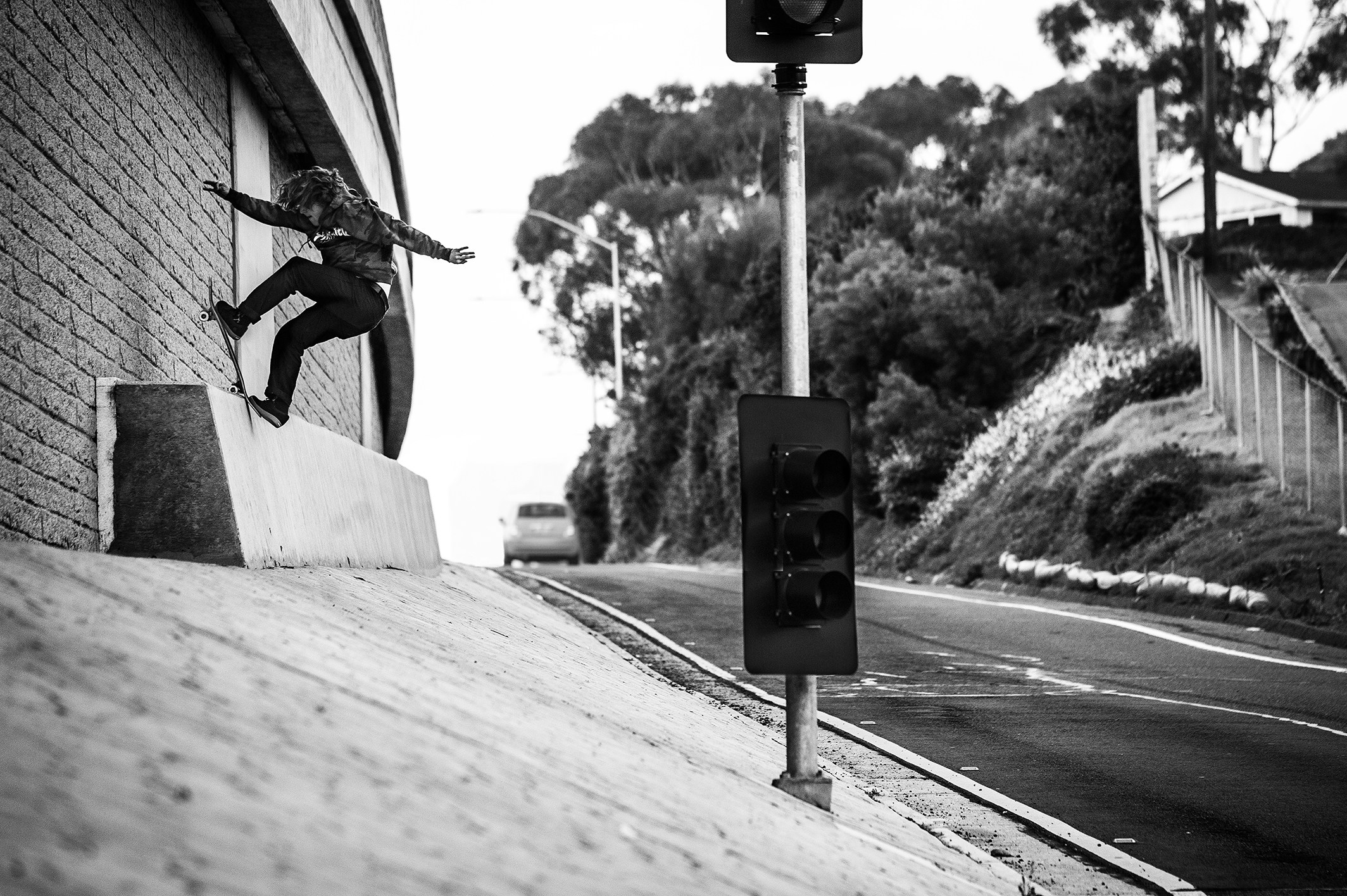 One of our local favorites, Mateo Rael is having a productive year. He already put out a part with us a few months ago and he’s already back with another banger. Mateo is obviously really good on a skateboard, but beyond that he’s a solid kid with a good head on his shoulders. That combination is a recipe for success, so keep your eyes on Mateo. This is just the beginning. Find out a little more about him below.—Jaime Owens

Give me some background on where you grew up, how old you are, and your family.
Well, I’m 21 years old and I’ve pretty much grown up in San Clemente my whole life. I’ve been skating since I was about seven years old when I picked up my neighbor’s Walmart Spongebob skateboard. My parents had to forcibly take it away from me because I was so in love with it. Then my dad got me my own skateboard from Big 5 soon after that. He didn’t know there were skate shops, but we soon found out about real skate shops and I got a Baker complete and started going to Nine Star in Mission Viejo which had a ramp in it too. I’d go skate in there and then watch Baker 3 all day in the front.

What’s your sponsor situation these days?
Just started getting some Foundation boards from Mike Sinclair. Yeah Mike, thanks! I also get Etnies, OJs, and Volcom. That’s the lineup.

You grew up in Shecks’ backyard. Was he your first favorite skater?
Yeah for sure. The legend! I remember not knowing who he was until I played Tony Hawk Project 8 and he was in that. Then I saw him at San Clemente skate park and we got a photo. It was like seeing the biggest star or superhero you’ve ever seen. He was was right there in the flesh and he was from my hometown. 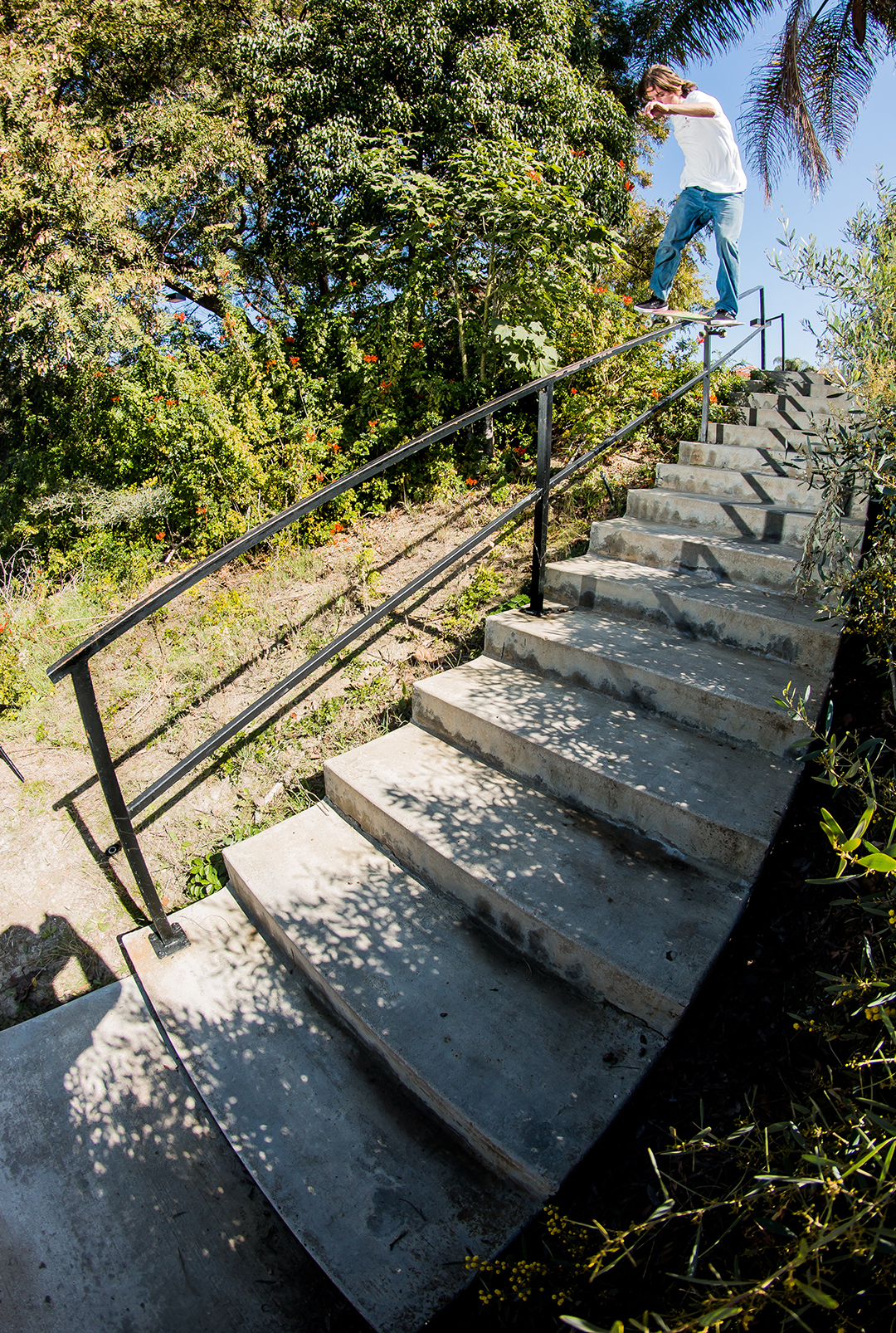 Who were some of the other local heroes you looked up to?
It’s always changed through the years, but there’s been so many great skaters from this area. When I got a little older, I started noticing Jake Hill. I always looked up to him and thought he was a badass skater. I’d watch his parts in the old YTrap videos and think they were so sick. Also, Taylor Kirby because he went to San Clemente High School and the skate PE teacher told me he was in his class a few years before me and that blew me away. I always loved seeing Taylor ripping around. Greyson Fletcher is another one. I would always see him when I was just a baby and he was always flying all over the place. He was always airing kids at the park. He’s the most mayhem I’ve ever seen on a skateboard.

You’ve already put out another part this year, but this one was more OC / SC focused. What’s the scene like here in the OC? Is it hard to find new spots since it’s been blitzed since the 90s?
It’s definitely a challenge and you have to think outside the box. You definitely gotta bring the tools around to liberate spots because they build them skate stopped from the get-go now-a-days in this area. But the real challenge is finding new stuff for sure, but there’s a lot of stuff that hasn’t been touched, so it’s possible. 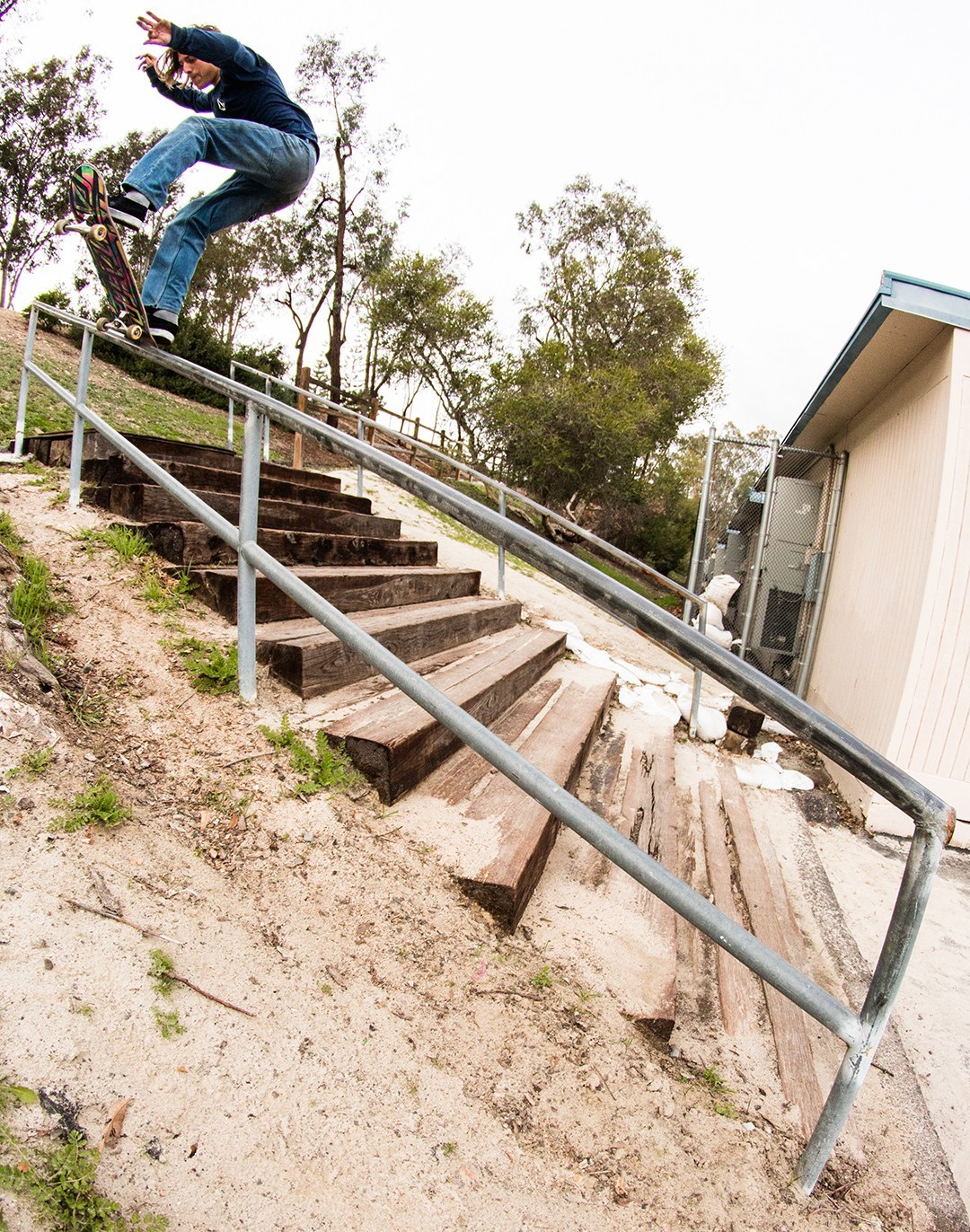 Being that El Toro is a local legendary spot, did you ever try anything there?
I’ve seen my friends grind it. I really wish I could have gotten a trick before it got shut down, but I guess it just wasn’t in the cards for me. My friend Brandon Burleigh got some clips there though, and honestly, just seeing that is enough for me. Yeah, I wish I got a grind on it, but I’ll be alright.

Which tricks in this edit are you most stoked on? Hardest to film?
I got a lipslide on this 18 in San Juan which I’m stoked on. My friend Joe and I went there and took off the kink and unknobbed it one night, so we opened that spot up. But I got the back 50-50 on the red kinker the same day as the lipslide, so that was really cool. And of course, the hubba tailslide bigspin in San Clemente because that was the most work I’ve ever done to make a spot skateable again. It was cool to skate it with my friend Adler too. I really like that clip. 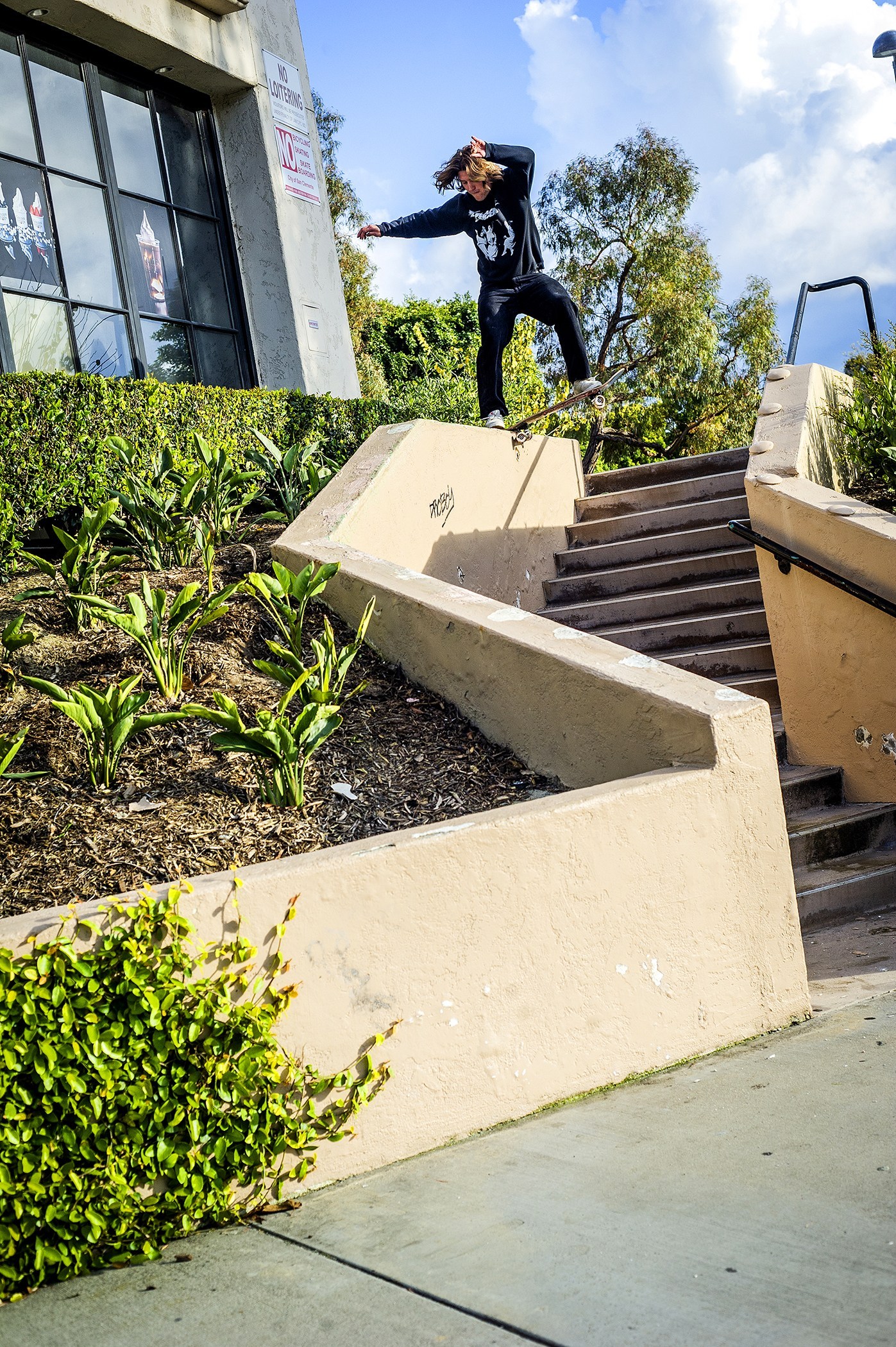 I remember you telling me you worked on a few commercials. Are you still doing those?
Yeah, I did a few things that heavily revolved around skating. It wasn’t just like random commercial acting. I was doing skate stuff in them. The biggest one was a Lunchables commercial that I filmed at Venice park. I just had to skate around a bunch and then I had to eat like 30 sandwiches. They only wanted me to take a bite and then spit it into this bucket, but I didn’t have a problem with just eating the whole sandwich, so I just ate 30 sandwiches back to back. They were actually pretty good. That’s about it for the commercial stuff, though. 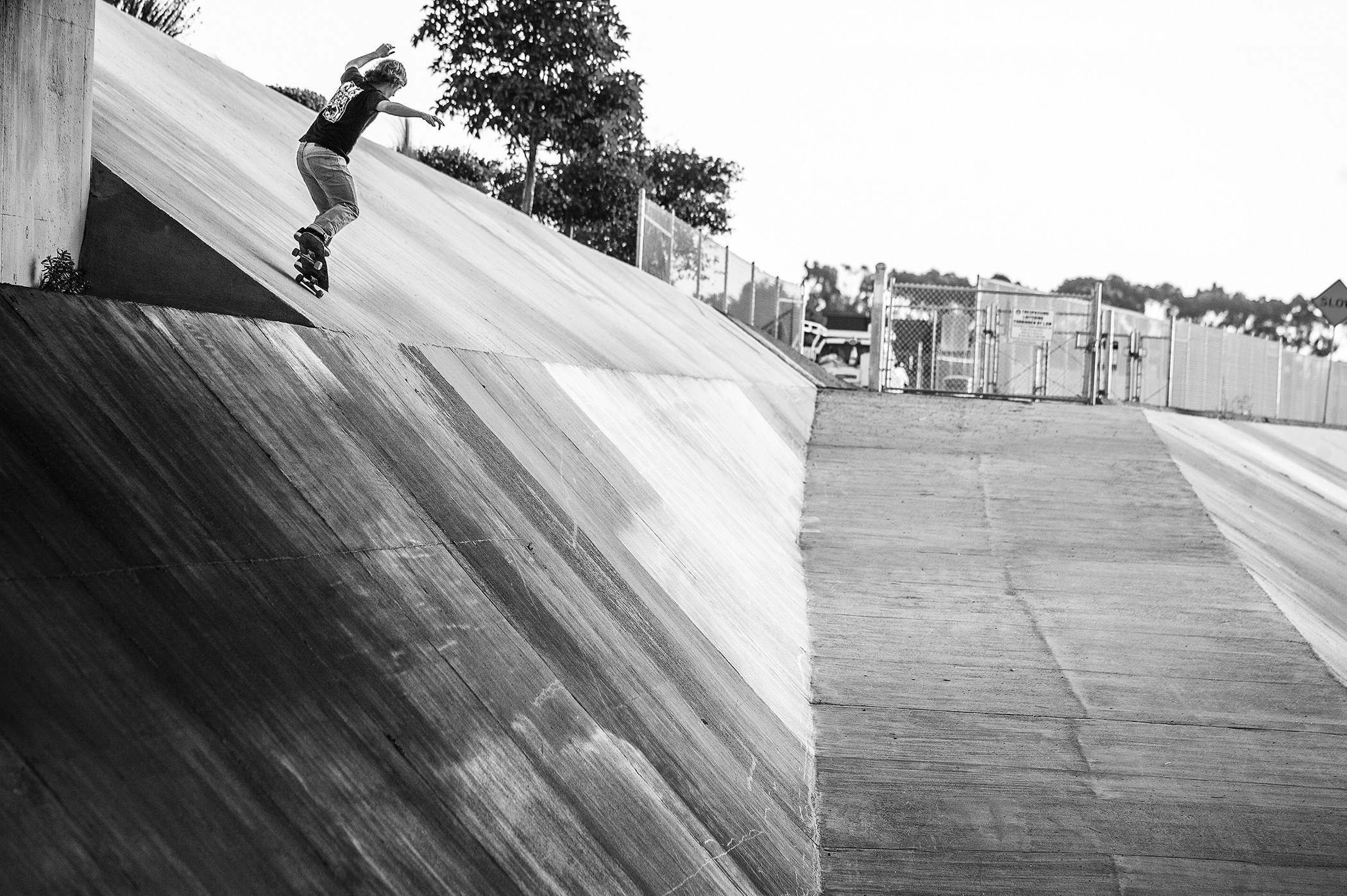 What makes the SC park so special, even though it’s one of the worst skateparks ever?
There’s an Instagram @keepscparkshitty and we can attest to that, right? No matter how bad it’s viewed, it will always have a special place in the locals’ hearts.

What’s next?
Yeah, just trying to go on some trips up to NorCal when I can and get some clips possibly for the new Foundation video in 2021 called Quantum Bitchin Boobalater. 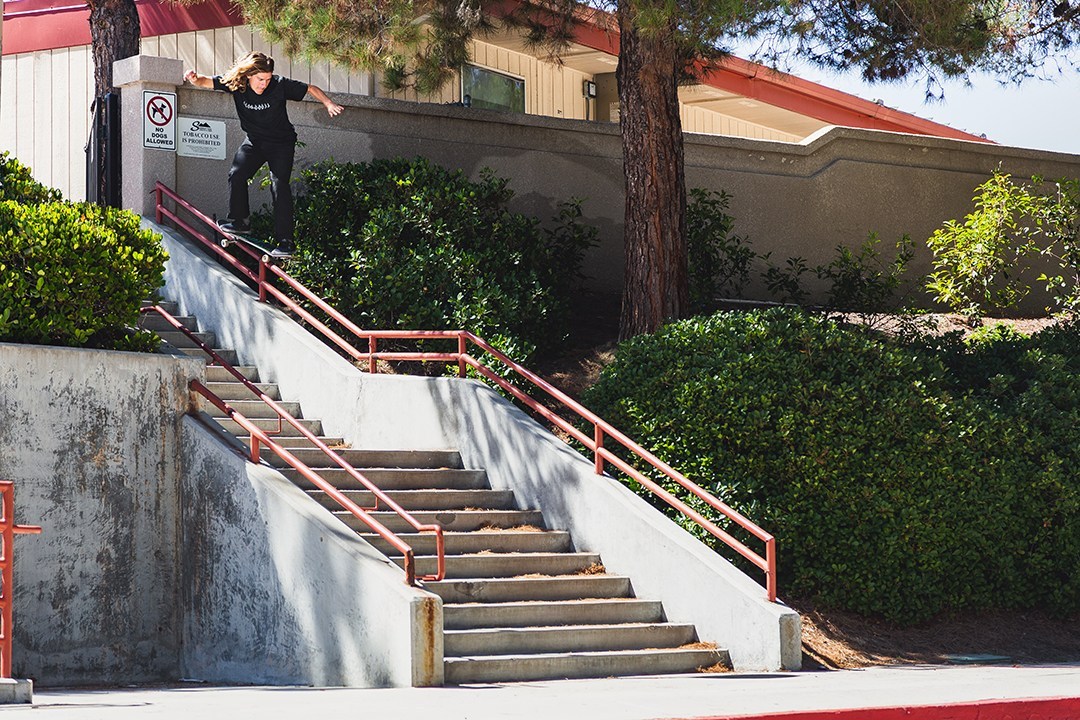 Now check out Mateo’s Memoir part from earlier this summer: