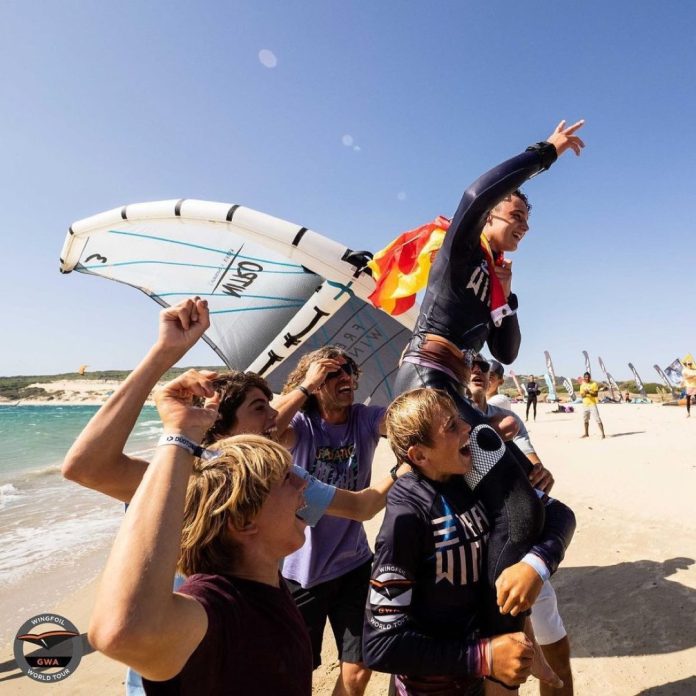 Watersports is witnessing a phenomenal evolution in wing foiling this season. The competition surrounding surf free-style wing foiling creates a dynamic platform where we witness the competition crushing the boundaries of what is possible from each event. The top trick from last week might not be by the next event as young athletes continually push each other to new heights in performance. It is an exciting time to be at the forefront of the  sport of wing foiling and among the youth that currently dominates the GWA World Tour competitions. The Tarifa Wingfoil Pro in Spain was no exception.

48 men and 15 women registered to compete in Tarifa out in front of a very promising ‘Levante’ wind forecast. The athletes delivered with incredible performances while the level and speed of progression among both the men and the women was electrifying.

And now, the 2022 GWA Wingfoil Tour has crowned their first World Champion of the season.   Women’s champ Paula Novatana’s win at Tarifa puts her at an untouchable distance from her competitors making her the 2022 Women’s Free Style Wing Foiling Champion. Congratulations Paula!

The 2021 Surf-Freestyle World Champion took a break from competition for most of this year, but made an impressive comeback in Tarifa to claim a third-place podium position. Such is the early beginnings of this sport. Bowien entered her first wingfoil competition for fun and found herself on top of the podium as Women’s World Champion at the end of the year in 2021.

At only 15 years-of-age, Nia Suardiaz exploded onto the wingfoiling tour this year, winning her first event in Leucate, France at the start of the GWA Wingfoil World Tour season. In early October, she also became the GWA U19 Youth Wingfoil World Champion in both the Surf-Freestyle and Surf-Slalom disciplines. Suardiaz may feel disappointed not to have been able to force a showdown for the World Tour title with Paula Novotna at the final round in Brazil, but she is still placing in second position in the Surf-Slalom slalom division. Therefore, Suardiaz still holds a world title opportunity when both disciplines will run at the final event in Brazil.

After fifteen years as a professional kiteboarder and current wingfoiling athlete, Czech Paula Novotna claims her first world title at the GWA Wing-foil World Cup Tarifa.  In a final against season-long rival, 15 year-old Spandiard, Nia Suardiaz, the two women went head-to-head for Novena to claim her win. After showing some nerves in the quarter finals on day two, Novotna straightened her head overnight and performed in the semi-final and final with incredible consistency. Calm and steady, she focused on safety and pressured her opponent into making several critical mistakes which cost her the win.

On the men’s side, there are currently multiple, young, talented riders who are consistently pushing the limits of the sport hard, and achieving results alongside more experienced competitors. One thing is very clear, the sport of wingfoiling is evolving at an incredibly fast pace for all competitors.

A rising all-round watersports star in France alongside his twin brother, Julien, Camille Bouyer has been one of the most consistent performers on tour this year. While also currently lying in third overall in the Surf-Slalom discipline, this talented French rider also remains in contention for a top podium placement at the end of the Surf-Freestyle season.

The French 17-year-old claimed his first event win in Round 3 in Lanzarote in this, his rookie year on tour. Athletic and with incredible vision for progressing new manoeuvres, Guenole was already an Instagram sensation before stepping foot on tour. He’s certainly proved his freeride credentials stand up to competition and is now within a chance of claiming the Men’s Surf-Freestyle world title in Brazil. In order for that to happen though he would need to win that event and for current tour leader, Gollito Estredo, to finish fourth.

Boosted by the home crowd support, 15 year-old Spaniard Xavi Corr completed an incredible month on the GWA Wingfoil World Tour.  In October, he was crowned GWA U16 Wingfoil Youth World Champion in both the Surf-Freestyle and Surf-Slalom disciplines, but this first full world tour event win is sure to be the sweetest for him. Early season results on tour didn’t go his way, and although he’s not in contention to claim the World Title in Brazil, any event win in Tarifa, the windsports capital of Europe, is a career highlight.

Stay tuned for more results from the GWA Wingfoil World Tour as contestants hit the water in Brazil on November 16-20, 2022.  Who will be the NEXT world wing foil champion?