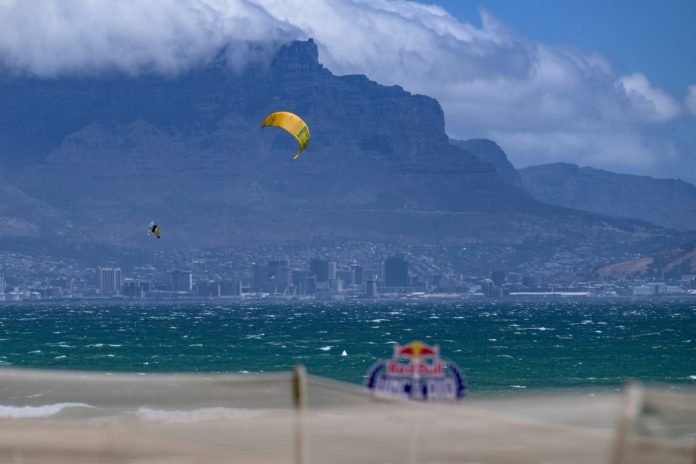 The competitive side of kiteboarding just witnessed a change in the guard at the 10th annual Red Bull Big Air kiteboarding competition. Incredibly, the event’s final heat was dominated by three rookies, one of whom had won his spot in the competition through a virtual video contest. Unknown, unproven and undeniably lethal, these young guns are ready to take kiteboarding to the next level.

Italian teenager Lorenzo Casati fought his way past fellow countryman Andrea Principi and Dutchman Jamie Overbeek to usher in a new era at the most extreme Big Air kiteboarding contest in the world, Red Bull King of the Air.  This event, held in Cape Town, South Africa in November 2022, drew large crowds to witness the progressive and powerful performances of these rookie riders who claimed top spots on the podium. Great momentum and excitement built throughout the day with the winds definitely in the contestant’s favor, blowing 40 knots or more, offering big opportunities and dramatic highlights throughout the day.

Red Bull King of the Air has long served as the single, biggest driver of Big Air kiteboarding progression over the past decade. It all culminated at this year’s 10th anniversary in South Africa when the event became a veritable showcase of just how far the discipline has come. This year’s Big Air competition drove spectators to the beach where the air was electric with three new, young competitors battling their way to the final. In addition, fierce winds gusting over 40 knots made this one of the windiest competitions in recent history.

If that’s not enough, this year’s King of the Air saw the highest scored single move and the highest heat score set by the exciting progression and performances at this November’s extreme kiteboarding contest. Riders were judged on the amplitude, variety, execution and difficulty grade of their tricks as well as given an ‘overall impression’ score by the panel of judges.

Keeping with the event’s dedication to progression, the 10th anniversary included winners of the Porsche Golden Ticket, a virtual contest open to video entrants between the ages of 16 and 25 who had never competed before. The three winners of this year’s Porsche Golden Ticket were rookie finalist Overbeek, Cohan Van Dijk (who went all the way to the semi-finals) and Evan Kiljn. Each were awarded a chance to come to Cape Town to compete in the Red Bull competition.

Golden Ticket winners each received an all-expense paid trip to South Africa to compete in a qualification round. Van Dijk won his round and qualified for the main event but – due to the last-minute withdrawal of Italian star Airton Cozzolino (who suffered an injury in training) – Overbeek also had the chance to line up. The Dutch teenager seized his opportunity and showed his class, handily beating world champions and previous winners on his way to the final, as did the various other rookies, including the impressive Casati.

17-year-old Casati, who won the right to wear the traditional African winner’s mask after 22 heats and seven hours of intense competition, revealed: “Just to be here and compete at Red Bull King of the Air was a dream come true for me already, but to win was a bonus. There were some really tough heats, so I’m just super happy. Thank you to my sponsors and my dad who has believed in me since I started kitesurfing.”

The Sportive Director of the event Sergio Cantagalli said: “The judging criteria and system are unique and don’t conform to any other kitesurfing or kiteboarding leagues or organizations. It is an exciting time for the sport.”

Casat’s strong performance led him to win as the most complete, extreme rider on the day. The Mystic Move of the day went to Spaniard Liam Whaley for a Double Kite Loop Back Roll Board Off that scored a massive 9.94 and is the second year in a row that Whaley has taken that title.  When it comes to talent, these young riders appear to just be getting started. It’s going to be exciting to see what happens… next.

Watch the 2022 Red Bull King of the Air replay HERE.

Until next time, folks!  Keep charging.