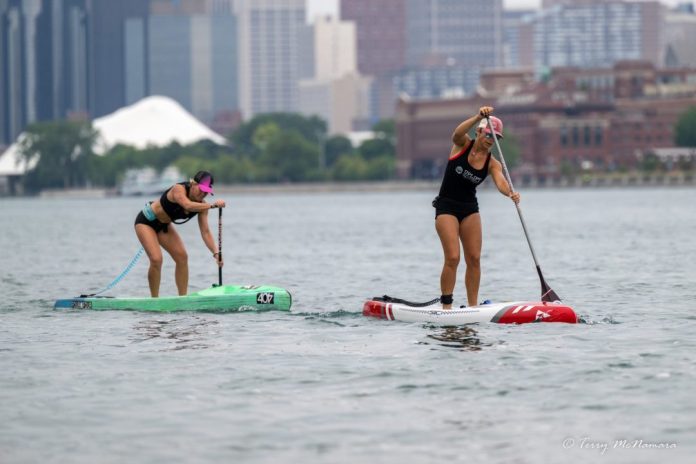 The MidWest Paddle League launches into the Summer’22 SUP racing season with the Belle Isle Classic in Detroit, Michigan!  A great day on the Detroit river.  Check it out here…

July 17, 20220 Detroit, MI – It’s hard to pick a storyline, there are so many angles to approach how significant Sunday’s Belle Isle Classic race was to the Midwest paddle racing scene, and ultimately to city of Detroit itself. Depending on your perspective all of the following could be interesting themes:

Community is Everything:  Midwest Paddle League

If you were there, you get to pick your own storyline, for the rest of you, you’ll just have to settle for this description of events and live in the regret that you really should have made more of an effort to attend. The good news is, there is next year. This is the first time in several years that can be said.

As dawn broke over the beach at Belle Isle on race morning, there was a definite sense of anticipation, uncertainty, and hope. Anticipation of fun, competition, and camaraderie. Uncertainty, about whether or not it would be as fun as the predecessor race (OABI). Some real uncertainty about the start location and condition of the beach (c’mon State of Michigan, you can do better). Uncertainty that the weather would hold out (it did).

Hope for a brand-new era, a brand-new audience, a brand-new set of participants to enjoy a lap around Belle Isle. One way or another, that hope was fulfilled.

The race concept is simple, one clockwise lap of Belle Isle, a historic island nestled in the Detroit River, mere feet from the Canadian border. The reality is that the race is a mile-and-half slog up-river against the current only to be faced by swirling current making its way around the tip of island. On a good day, like race day this year, once you make it around the tip, your treated to a fast downriver 3-mile jaunt with minimal boat wake. Though this year’s race was visited briefly by a passing freighter. The finish is a challenging ~1.5 mile segment back upriver to the start/finish line.

With 100+ paddlers, a mass water start was the order of the day. In a unique twist, there was one tandem coastal scull, captained by Roseann Kirchoff, that completed the course in an unbelievable 54 minutes and change.

There were several other tandem craft, Michael Meredith and Sarah Jones piloted a 2-up surfski, while Chuck Sisunik and Jacque Sisunik bested Chris Murphy and  Andrea Waters in the OC2 division.

Scott Cummins on a surfski was the fastest single-occupant craft on the day with a very fast 56 minute time. Mark Irish and John Alguire rounded out the sufrski podium.

The OC1/C1 division was also hotly contested with Ted Burnell, Shane Peterson, and Christopher Devries all with a few minutes of each other.

The SUP 14’ division was dominated by Flying Fish team riders from both Florida and Canada.

As per usual this season, some of the most exciting racing came in the women’s 14’ division, and while world class athlete Kim Barnes took off at the front, Canadian Danielle Holdsworth showed real strength in her 2nd place finish. Julie Miller turned in her best paddle of the season beating both strong competitors Kattie Carpenter and Kirsten Marina Lefeldt.

In the under 17’ Kayak/Surfski class Robert Drummond led Tim Shellabarger and Caleb Alley for the men’s. Missy Kinyon led Gwenn Stevenson and Patricia Fedewa for the ladies.

Full results can be found here.