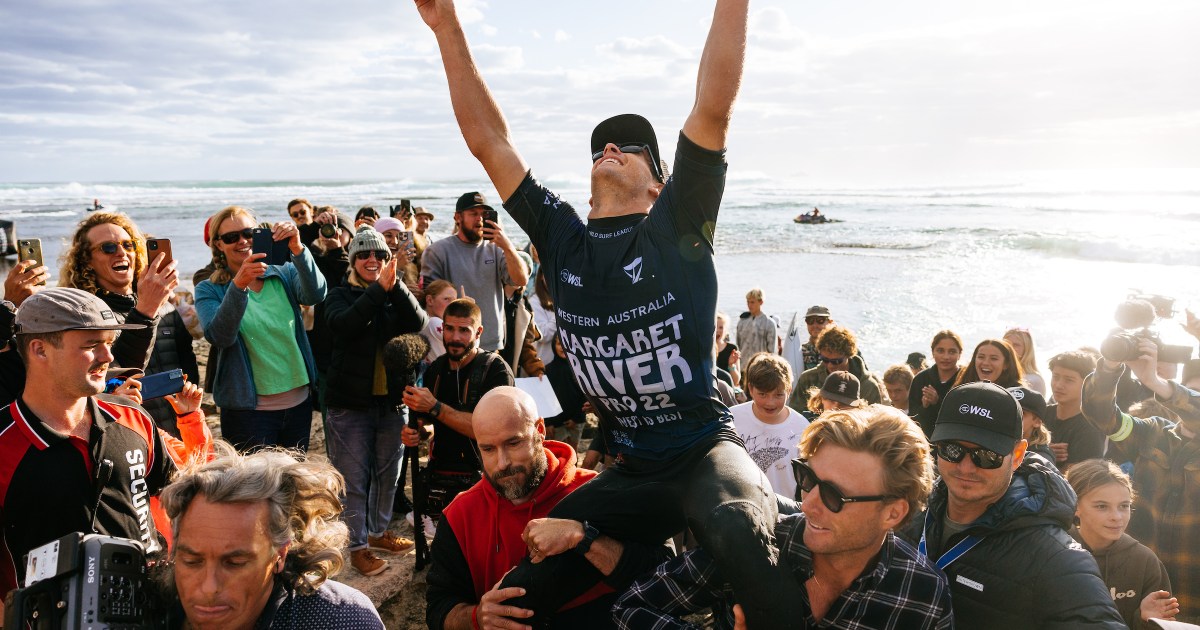 After a few tumultuous days of will-they-or-won’t-they-make-the-cut competition, the fields of 34 and 17 were narrowed down until two Australians reigned supreme. Isabella Nichols and local boy Jack Robinson respectively overcame Gabriela Bryan and John John Florence to become the Margaret River Pro champs while also securing a spot on the remainder of the tour season. To rewatch each finals showdown, hit play above and below and continue reading for the WSL’s recap of the event:

Coming into the Final Day of competition at the Margaret River Pro, Isabella Nichols (AUS) sat in 12th position on the rankings and below the Mid-season Cut line. To move above the cut and keep her spot on Tour, the equation was simple: Win the event. In her second year on the CT and having only one CT Finals appearance under her belt, taking a win at the elite level would be no easy feat, but the Sunshine Coaster dug deep to overcome local hero Bronte Macaulay (AUS) in the Semifinals and rookie Gabriela Bryan (HAW) in the Final.

The final saw a back and forth battle between Nichols and Bryan, but in the end it was the smooth frontside of Nichols that saw her claim her maiden CT victory, and save her spot on the elite level. Nichols will now head to the Quiksilver Pro G-Land sitting in the fourth position on the rankings.

“This moment doesn’t even feel real at the moment,” Nichols said. “I’ve dreamt about this my whole life and I feel like this is going to take a while to sink in. There is no better feeling than this in the whole world. I just came to this event, and as corny as it sounds, I just had fun. It was just yesterday I was thinking about falling off Tour,, and now, it’s all about the WSL Final 5, the goals have changed. I just want to thank friends, family, fans, and sponsors, this is just amazing.”

For the first time in over 30 years, a West Australian has claimed victory at the Margaret River Pro as Jack Robinson defeated event favorite John John Florence (HAW). Coming off an equal third-place finish at the Rip Curl Pro Bells Beach, Robinson came into his home event with one thing on his mind, victory. Today, on a massive day of competition, Robertson overcame Barron Mamiya (HAW), Jordy Smith (ZAF), and form-surfer Ethan Ewing (AUS) to matchup with event favorite Florence in the Final. In the last heat of the event, Robinson went big, posting a 16.24 two-wave combination for an impressive combination of rail and aerial surfing to claim his second CT victory in only his second year on Tour. With this hometown win Robinson rockets to third place on the rankings ahead of G-Land, an event he will be fancied to go deep into the draw at.

“Man this is amazing because I’ve had so many rounds so close here so for it to all come together feels too good,” Robinson said. “I feel so connected with this place, especially with all the support from the people here, my family and my wife Julia, Matt Bemrose, Leandro Dora, everyone, you know who you are. I haven’t been home for so long and this was a short trip back so I’m glad to make the most of it and be back here on the land and respect the place. I’ve just been trying to channel the energy and stay level the whole way through. There can be so many ups and downs so I just wanted to stay level this week. It was really special to share a heat with John, we haven’t gone man-on-man before but he always brings the best out of me so it was nice to have that moment with him. It’s a long road so I just want to enjoy this for now and shift my focus to G-Land after I’ve enjoyed this.”

It was a big day of competition for the men, who surfed the Round of 16, Quarterfinals, Semifinals, and Final in an epic end for the 2022 Margaret River Pro. Florence progressed to the Quarterfinals after Kolohe Andino (USA) withdrew due to illness. The Round of 16 also saw Matthew McGillivray (ZAF) continue his winning streak, taking down Samuel Pupo (BRA) in the second heat of the day. The heat win put McGillivray above the Mid-season Cut line, allowing him to keep his spot on the CT moving into the second half of the year. With McGillivray taking the last place inside the Top 22, Australian CT veteran Owen Wright (AUS) has missed the cut and will now focus his attention on the Challenger Series for the remainder of the year.

The women’s Semifinals started with a bang in Heat 1 Bryan and Courtney Conlogue (USA) who were both right next to the Mid-season Cut line coming into Margaret River. Bryan was quick to set herself up with a strong wave and was followed by a procession of above midrange scoring waves by both surfers. Bryan’s last-minute 8.73 (out of a possible 10) wave was enough to win the heat and progress her into her very first Final, ahead of the two-time World Title runner-up.

The new Mid-season Cut has now reduced the CT fields to the Top 22 men and Top 10 women. These top surfers will continue through the back-half of the CT in an effort to make the WSL Final 5 and compete in the Rip Curl WSL Finals. They have also all confirmed their places for the 2023 CT season.

Those who did not make the cut will need to compete on the 2022 Challenger Series in order to qualify for the 2023 CT. The eight-stop Challenger Series kicks off at Snapper Rocks at the Boost Mobile Gold Coast Pro presented by Rip Curl with promising swell on the way for the event window opening May 7, 2022.