Thirteen years ago, Austin Smith was a young kid on the come up who was making all the right moves, so much so that his ending segment in MDP’s We’re People Too garnered him Rookie and Video Part of the Year accolades. From there, all the requisite doors were opened, seemingly the biggest of which was an invite to join the prestigious Nike super team. Incidentally, around this time Austin also made the shift from K2 to Nitro. While riding for The Swoosh was a rarified opportunity, it was the latter sponsorship development, signing with Nitro, that would prove most impactful on Austin’s snowboarding trajectory. While Nike exited our sport within a few seasons, Nitro continues to build upon its three decades of heritage by manufacturing some of the best boards, boots, and bindings in the world today.

Raised in Bellingham, Washington, and now calling Bend, Oregon home, Austin’s initial snowboarding acclaim came from being at the forefront of trick porn, but this trajectory was hindered by several seasons of dealing with recurring knee problems. While enduring a successive cycle of surgeries and rehab, Austin had plenty of time to reflect and plot a new course for his ambitions. All the while, Nitro was unwavering in their support. Unceasingly savvy and self-aware, once healthy, Austin emerged from his injury-induced exile on a more culturally relevant and relatable path with adventure and technique usurping acrobatics and consequence. Furthermore, he decided to channel his influence to be more aligned with his ideals. To that end, nine years ago Austin partnered with longtime friend and Nitro teammate, Bryan Fox to found Drink Water, an organization started as a counterpoint to the enigmatic presence of energy drink companies in action sports. By taking the same tools and tactics employed by “sugar water” companies to promote the real thing, Austin and Bryan have not only highlighted a healthier approach to hydration, but they’ve also been able to use the money they’ve raised from donations, merchandise sales, and events like the Rat Race and Double Tap to build drinking wells in third world countries.

As of late, Austin has once again found himself on the cusp of a new chapter. This season was Austin’s last spent atop a Nitro board. As much as Austin is optimistic about taking his career in a new direction, leaving Nitro, a sponsor that he has proudly called home for over a decade, brings with it feelings of melancholy. From the development of signature products to team trips and summer camps, Nitro will always be a part of the fabric of Austin’s snowboarding and that is something he is focused on celebrating at this time.—Pat Bridges

Let’s begin. So, you have some news to share.
I do. I want to start by taking a moment to say thank you and that I appreciate the past twelve years I’ve spent being a pro snowboarder with Nitro. I think I was pro. What does pro mean? I think we need some more definition to what a pro is.

If someone as prolific and resonant as you, with so many fans and followers, doesn’t know what a pro is, then a lot of other people should really question their own status!
There’s a little bit of a gray area sometimes. These days is being a pro snowboarder making a certain amount of money? Is it having a blue checkmark next to your name? Is it a certain video part? Is it winning a contest? Is it having a pro model? But let’s not get too sidetracked. That’s a different conversation for a different time.

Back on topic. After twelve years, you are now announcing that you are leaving the Nitro team.
Yes, I’m leaving the Nitro team. I’m biased, but it’s arguably the best team in snowboarding. A diverse team from Europe to America. But yeah, moving on. Had a hell of a time. Got to travel and design and develop snowboards. Somehow, they decided to put my name on over thirty different boards. I am grateful for all of it, but as they say, all good things must come to an end. 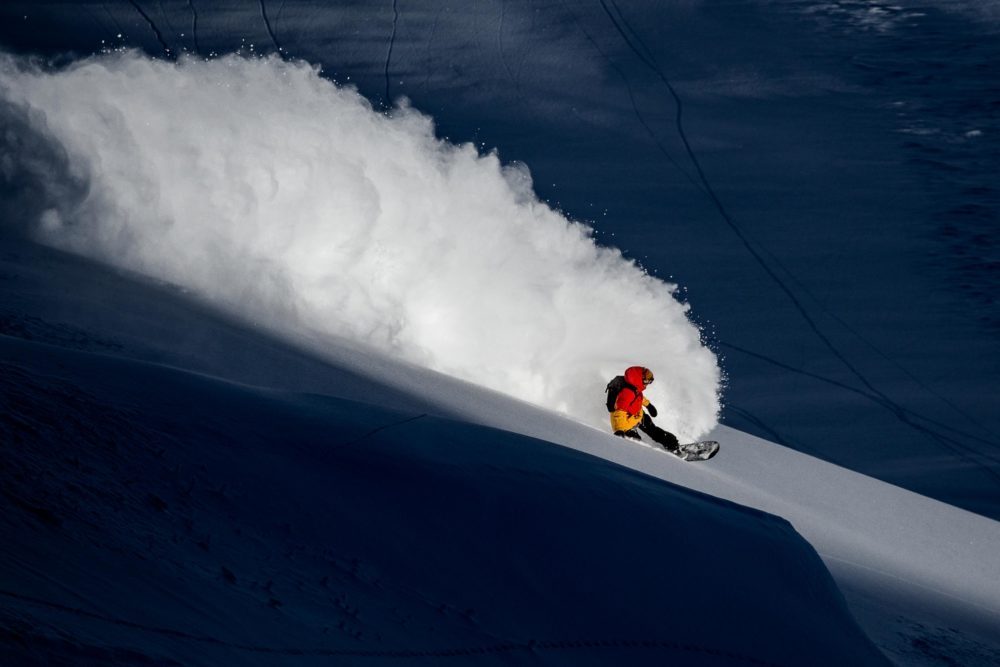 Twelve years ago, you were an “it” kid with awards and enders. You kind of had your pick of sponsors. What was it about Nitro that made you want to join their program?
A big part of it was previous riders. As a twelve-year-old, two of the posters I had on my wall were Nitro posters of Andrew Crawford and Lukas Huffman. They had an insane roster of Crawford, Huffman, MFM—some heavy hitters. I’m grateful for all of the riders who came before me who shaped the brand and made it something special. The other major reason was the people involved. Tonino Copene was iconic on Mount Hood and was the team manager at the time. Getting the phone call from him was rad. Ironically, I got my spot on the team because Crawford and Lucas were voluntarily retiring.

Who else was on Nitro at the time?
Bryan Fox and I joined together in 2008. There were guys like Etienne Gilbert, Josh Mills, Fillipo and Giaccomo Kratter. There was Eero Ettala, who I also looked up to as a little kid and somehow, some way he is still jumping off things and doing backside 270’s onto handrails. It’s pretty insane when you look at the history of the team because almost everyone has ridden for Nitro at some time: Bode Merrill, Sage Kotsenberg, Jon Kooley, Justin Hebbel, Janna Meyen, Eric Christensen, Manuel Diaz, Arthur Longo, Justin Bennee, Markus Keller.

But the Nitro pedigree goes way beyond the team.
They have been around for thirty-two years, older than I. It is through and through a snowboard company. The owners, Tommy and Sepp, were a couple dudes who wanted to start a company because they loved snowboarding. Nothing has changed. Tommy is still incredibly involved. He has enjoyed making Quiver stuff with us the last couple of years because he gets to make random boards and gets to try new stuff. A company started by snowboarders for snowboarders is aspirational for anyone to be a part of and support. 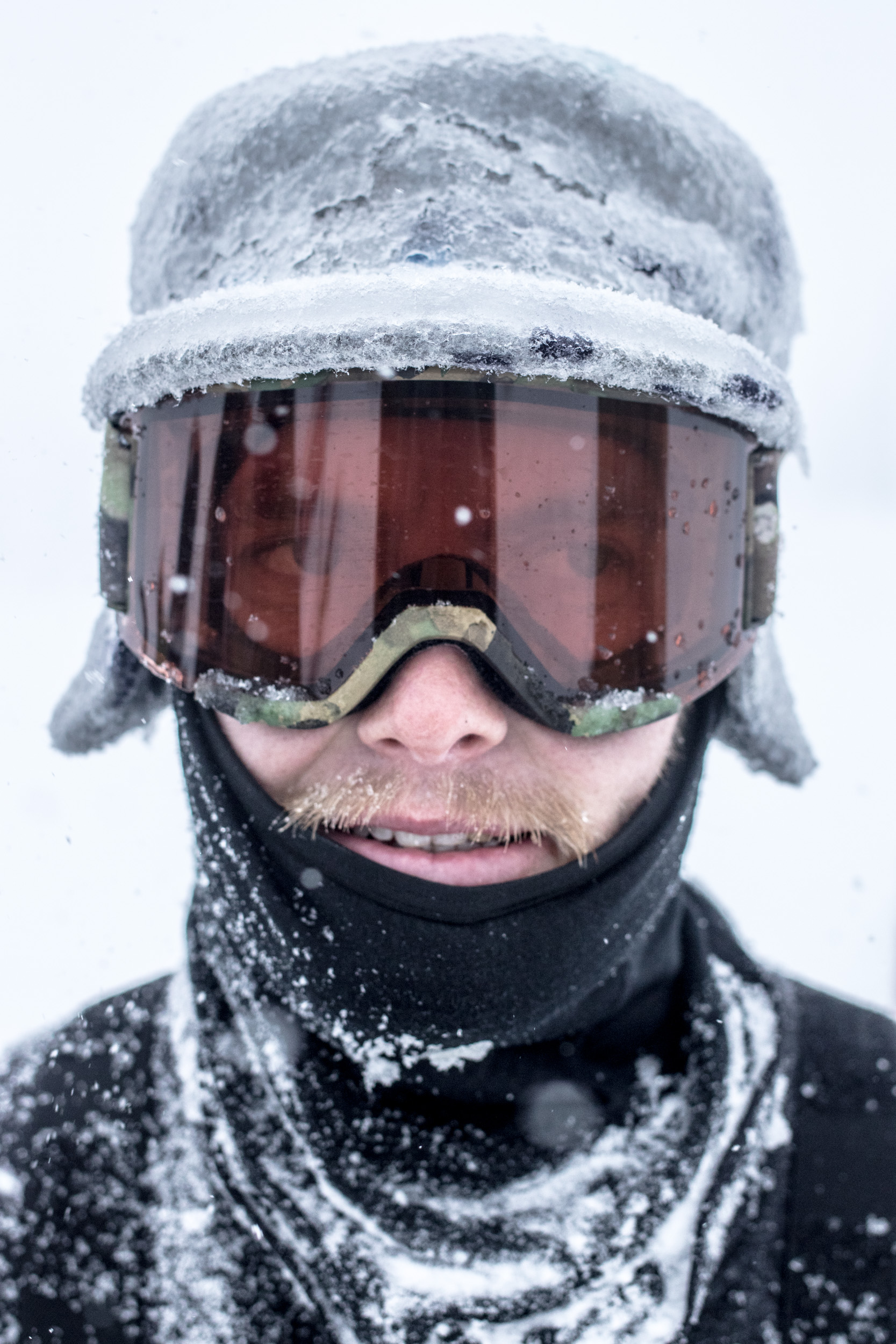 Beyond the on snow performance, Nitro has also been graphically driven. How close did you get to work with the art department?
At first I was intimidated by it. I didn’t feel tough enough to be on Nitro. I had a lot of self-doubt around that. There were a lot of skulls and the team riders had a lot of tattoos. I was just this shy eighteen-year-old kid. That’s probably why I made my first pro model a Three Inches of Blood collab. I wouldn’t say that represented me, but I think I did it to fit in. But generally, there have been a lot of black snowboards over the last thirty years which is simple and I like simple. Then through the Quiver Series, we made some colorful ones, too.

And how did the Quiver Series come about? It seems as though that line has become one of the more consistently well-received series, year after year.
It has been going for six or seven years now, which is longer than we expected. I remember being in a liftline in Japan and looking around and seeing a huge variety of snowboards. I looked down at my twin tip and thought I wanted to try something different. I went home and built a board in my buddy Joe Blecha‘s garage because he had a press. I built that and the guys at Nitro saw it and were like, “Let’s turn that into a real snowboard.” We developed the idea of having one snowboard for powder, one for resort riding and one for riding rails because at the time Bryan and I were still somewhat jib dogs. Over the years, the series has evolved into being more powder-focused, but the original idea was to build three boards that could handle any conditions.

That first 154 was slightly ahead of its time as far as being a purpose-built pow stick for the masses. How did you guys come up with the others?
It wasn’t revolutionary, but was a bit outside the box. Now every brand has their own variation, but I was psyched to be on the forefront. The Quiver Series has a lot of different boards in it and we ride and shoot on every single one. Riding different boards with different shapes and sidecuts, be them asymmetrical or twin or directional, is the best experience you can get. Then you translate that experience to paper and you can see why a board flexed here or there and why it wouldn’t get off edge or couldn’t get on edge. Taking it to the snow is the critical part and I spend more time there than the paper part, but they go hand in hand.

Tell us the most memorable experiences from your time with Nitro.
All of the team trips were memorable; they’re an entertaining group to be around. It’s a diverse crew from younger kids like Jared Elston to more seasoned like Jeremy Jones. You get everyone together and it is a good mixing pot of multiple generations. Lots of European and American intermingling. Nitro Camp Good Times. 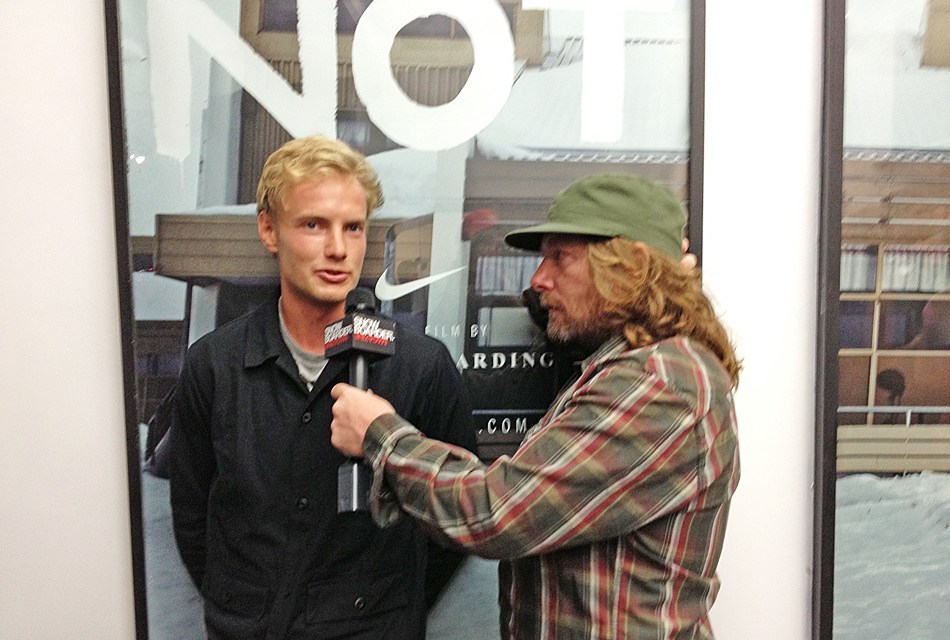 What this interview would have looked like five years ago.

The current team manager, Knut Eliassen definitely had some big shoes to fill after Tonino left. How has working with Knut been?
For my whole time with Nitro, my team managers have been better riders than me. It is a little awkward, but keeps you on your toes. Knut can do every trick there is and can handplant anything. It puts a fire under my ass ‘cause if I don’t do something, Knut probably will. Ultimately though, it’s great working with people who are snowboarders because at some brands the team managers aren’t as connected to riding, much less doing 900’s like Knut.

While you are stepping away from Nitro boards you are staying with The North Face, Smith, Smartwool, evo, and the rest of your current sponsors.
Staying with everyone else. For the last three months I’ve been riding hard goods from every company under the sun and it has been exciting trying every shape and size out there. It’s actually something I should have been doing for the last ten years while I was developing stuff for Nitro, just to be more familiar with everything else out there. But I guess I was lazy and nobody else was sending me boards to try, so I’ve enjoyed going to the demo shop this winter.

Anything else you’d like to say at this time to your family and colleagues at Nitro?
Mostly just thanks for the best times and incredible support. There is a lot of compassion, patience, and support coming from snowboard companies toward their riders, but mostly you only hear about people parting ways on bad terms. I just want to take this opportunity to say that these guys were incredible for twelve years and they saw me through too many knee surgeries and highs and lows. Grateful for the opportunity and excited to see who takes my spot on the team and what they do with it, like a ball sport sports team.

So this isn’t the end of pro snowboarding for you, just a change. Can you talk about what’s next?
Definitely still snowboarding. I don’t know that I’ve ever enjoyed riding more than I do now. I love riding resorts and it will just be on different snowboards, but I don’t know what I want to say about that yet.