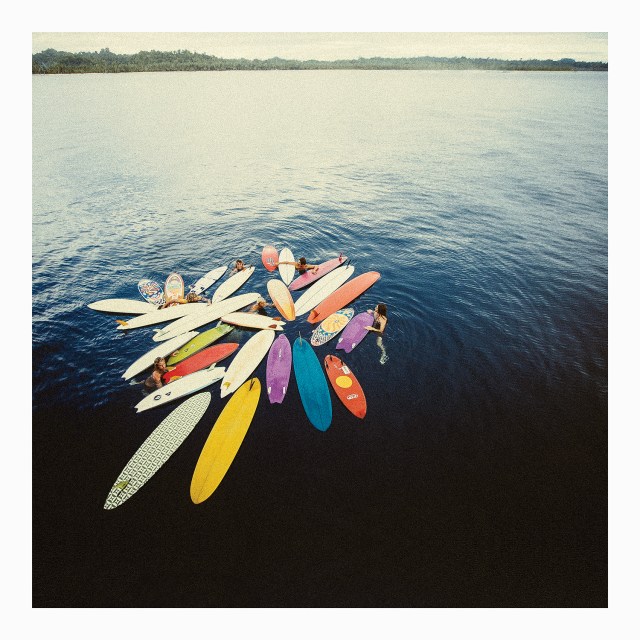 Throughout his roughly 25 years as a surf photographer and editor, SURFER Photo Editor Grant Ellis has always sought out the images — both his own and others’ — that would “stand the test of time.” In the early 2000s — as digital photography grew in editorial use — Ellis knew digital quality hadn’t surpassed that of film yet, so he’d fulfill his contest assignments on an early-generation DSLR, then switch back to his film camera at the sound of the heat-ending horn.

“I’d swim out early and shoot slide film until a contest started, then switch to shoot the contest because my job was to shoot digitally,” he says. Even today, you might catch Ellis on a magazine shoot, juggling between his DSLR, Hasselblad and Leica, pursuing an image that will transcend its context.

That commitment to quality has carried through Ellis’ 17-years-and-counting career as SURFER’s photo editor. He’s guided the magazine’s photographic vision for nearly 200 issues, and shot over a dozen covers. Says longtime SURFER staff photographer Todd Glaser, Ellis’s “visual voice elevated the viewers’ experience, as well as that of those who contributed to the magazine.”

Indonesia, 2017. This image first appeared as a 2018 SURFER cover, and now hangs at RisingCo Gallery. “It was a frenzy — the boards were all floating, we were on a boat floating, I was shooting on my Leica, Hasselblad, and digitally, and that shot somehow worked. There’s only one frame that worked like that where everything came together and looked nice compositionally.”

Ask Ellis what particularly proud moments he’s enjoyed as photo editor and he harkens back to the book-like volumes the team would assemble at the height of print surf-magazine culture, when the annual Big Issue spanned 365 pages, a heavy tome of escapist imagery and stories that was meant to be held and savored, not glanced at and discarded.

The tactile image, printed on paper, dwarfing the size of an iPhone screen and invulnerable to the fleeting scroll of an Instagram feed, has a power in which Ellis still deeply believes. 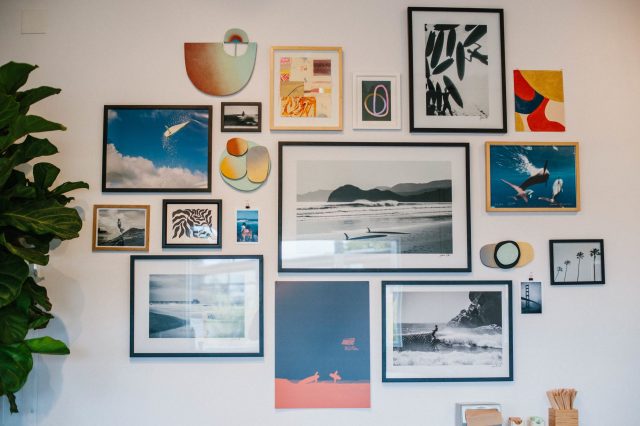 A mix of his own images and the work of others, Ellis wants the gallery walls to be an opportunity for other artists “to put their stuff out in the world.”

Which is largely why he’s founded RisingCo Gallery, a small studio space in Oceanside, California, which opened two weeks ago. The gallery shares floorspace with Seaborne Coffee, which opened at the same time, and sits inside the Rising Co. cooperative store that Ellis’ wife Julie founded. Ellis’ photographic work hangs on the clean white walls, alongside mixed media pieces by artist and filmmaker Thomas Campbell. Shelves below hold wood sculptures by artist Jeff Canham and photo books by the likes of Tatsuo Takei and Leroy Grannis, and zines by Tanner Gudauskas.

“I think people appreciate that they can get to look at stuff like this on a wall, because we’re all so locked into Instagram,” says Ellis. “I feel like Instagram and those types of things are such a different way of viewing an image from when you see it on a wall nice and big. To offer that experience is cool.” 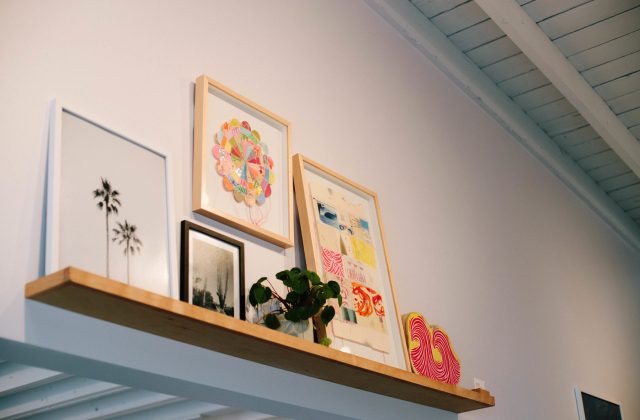 The gallery features sculpture, paintings, and mixed-media pieces from artists with whom Ellis has formed relationships over his career.

While establishing RisingCo Gallery has included a steep small-business learning curve, the project is driven by passion more than profit. “It’s more an experiment and a way to get my work off the computer and onto the walls, and see it in a tactile way when everyone is so digital,” says Ellis. The gallery features images that first saw light of day as SURFER covers, such as one of a colorful amalgam of alternative surfcraft floating in Indonesian waters during a Thomas Campbell film shoot, and enduring shots like Rob Machado frozen in time on a drawn-out bottom turn, and a highlining Alex Knost in black and white. 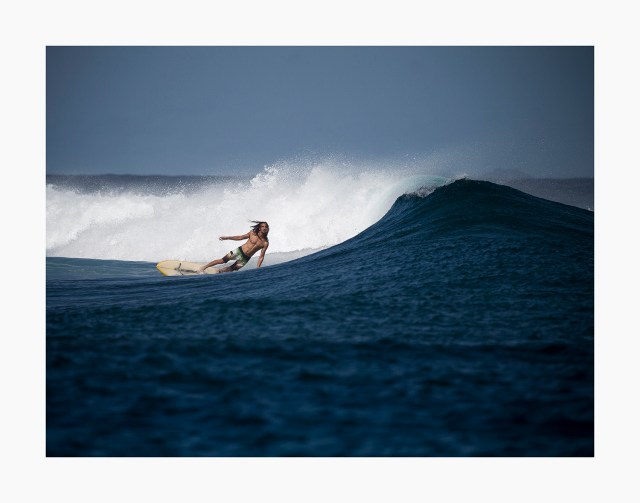 Mentawais, 2012. “Rob was getting these tiny little tube rides but nothing was looking that exciting until he did this bottom turn. You never know when those moments are going to happen. That happens a lot with me and Rob; I got a cover shot of him at George’s the same way.”

It’s also a place for Ellis to dig into, and share, interests outside of surf. The shelves include photo books by street and art photographers like Alex Webb and Deanna Templeton, many of which were plucked off Ellis’ own bookshelves at home. “I want to include stuff that’s not just surf related, it’s stuff that I’m into as well,” he says. “I’ll put it out there for people and if they’re interested in it too, great.” 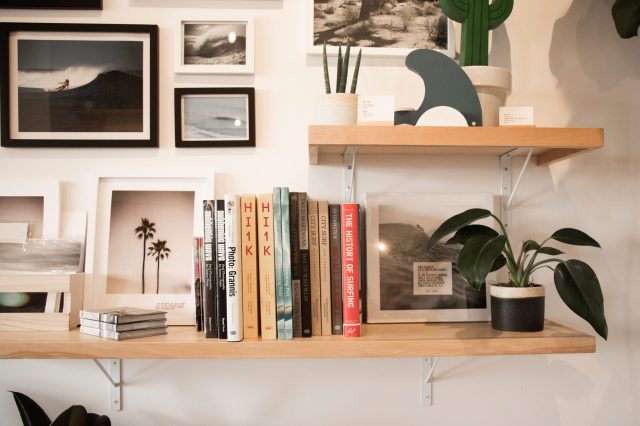 Many of the books Ellis offers at RisingCo Gallery were handpicked off his own bookshelves.

In its soul, however, RisingCo Gallery is a surf gallery, small in square footage but mighty in its 25 years of Ellis photography archives from which to pull, and relationships with the most talented photographers and artists in surfing, both established and up-and-coming. “Ultimately it’s not about me,” says Ellis. “I don’t want it to be my gallery, I want it to be a space where artists can put up their work, to connect with people and put their stuff out in the world.” 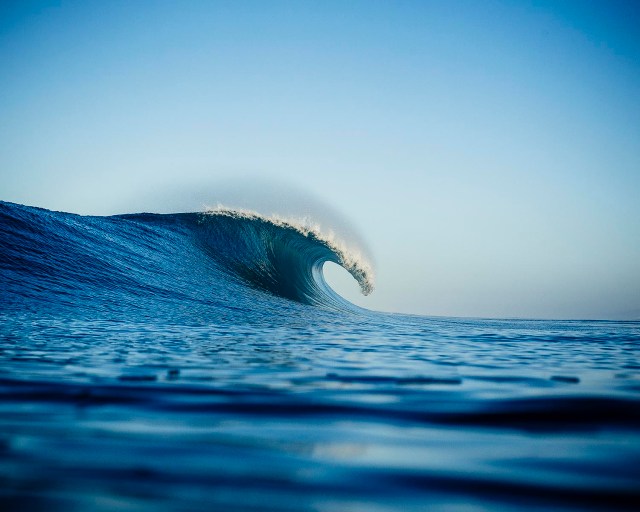 Oceanside, 2015. “I was shooting Nate Yeomans on the left in front of me and I turned around for a split second and saw this little peak coming that a-framed and peeled off. I literally shot one photo I think. Just kind of a lucky shot.”

RisingCo Gallery is located at 332 S. Coast Highway in Oceanside, California. Keep up to date on new art and events by following @risingcogallery. Purchases can be made in person, on the Rising Co. website or by contacting RisingCo Gallery directly for custom orders.