This Gorgeous Board is Getting Raffled for Racial and Environmental Justice 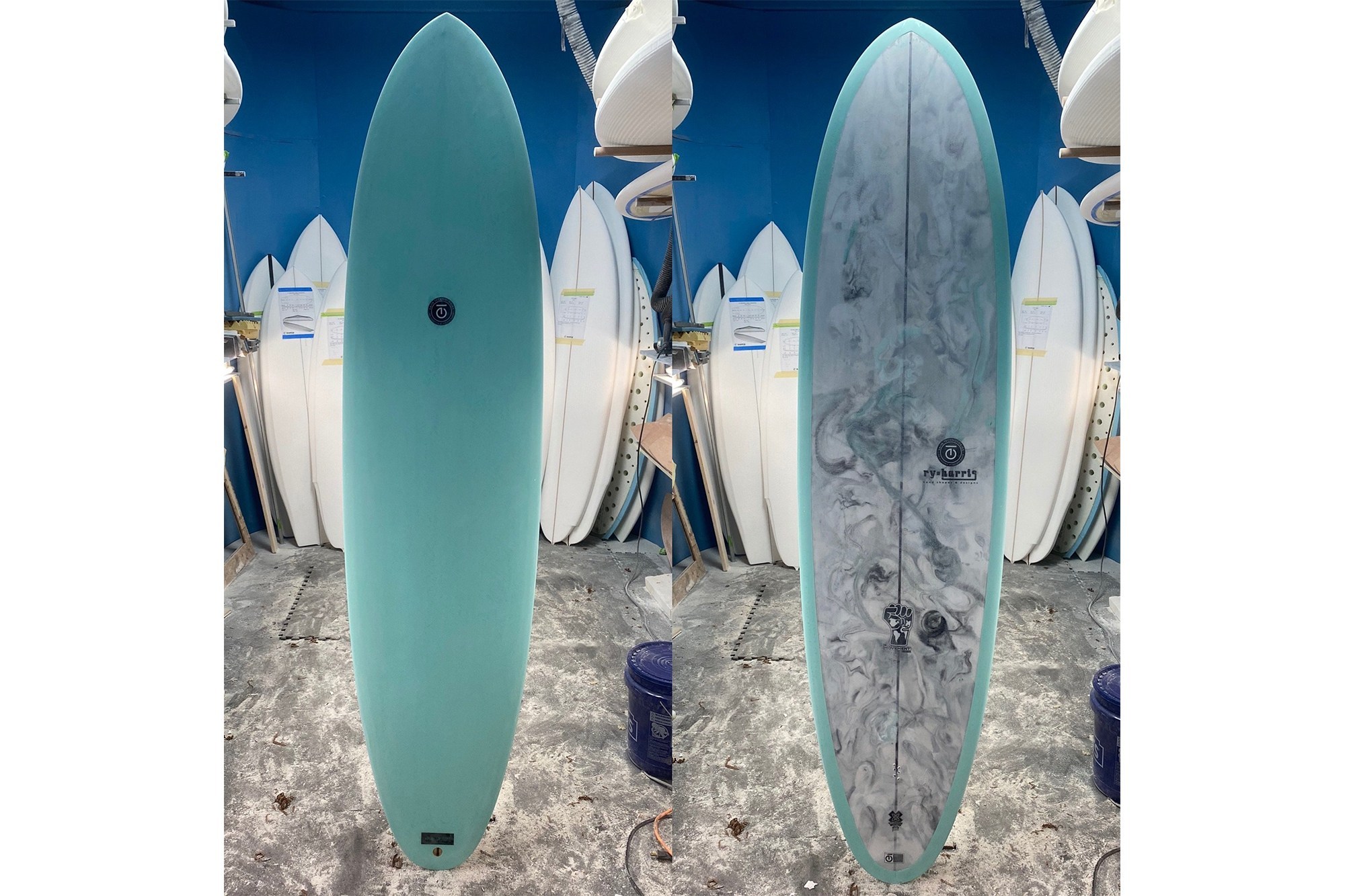 Los Angeles-based shaper Ryan Harris expected to be busy this year, but not this busy. After purchasing a top-of-the-line CNC machine for ramping up production of his eco-friendly surfboards, he anticipated a surge in demand from his private label clients — Biolos, T. Patterson, Maurice Cole, etc. But on top of experiencing an uptick in demand for blanks made via Earth Technologies’ zero-waste manufacturing process, Harris’ custom orders took off just like so many shapers during the pandemic.

If all that wasn’t keeping Harris busy enough, being a Black surfboard shaper working in an industry that is overwhelmingly white during America’s racial justice movement has brought even more attention and interest in his work.

Harris has embraced the moment, using his platform to relate his experiences of being a Black man in America, while seizing the opportunity to connect the demands for racial justice to the sustainability practices he long ago embraced. (As many leaders within the Black Lives Matter movement have pointed out, racial justice and environmental justice are inextricably linked.)

Along with three other influential Black surfers — longtime surf commentator Selema Masekela, Textured Waves co-founder Danielle Black Lyons and professional surfer Hunter Jones — Harris recently launched 1 Planet One People, an initiative to support climate action and racial and social equality. One of the organization’s first endeavors has been to launch a series of surfboards that feature the work of renowned artists and draw attention to causes of import. Each board will be raffled off, with Red Bull matching all funds raised through the raffle.

First up: a nifty little Harris-shaped egg, the Movement Mid-length, which you can enter to win here.

We reached out to Harris to talk about 1 Planet One People and the intersection between racial and environmental justice.

You’ve been busy, right? I’ve talked to a lot of shapers who’ve been inundated with orders since the start of the pandemic. Sound familiar?

Oh, man. It’s been crazy. I got a CNC machine almost exactly a year ago. It’s one of the best ones in Southern California. So fast-forward to now, I’m getting way more custom orders for my own label. Part of it is COVID, people are ordering more surfboards right now. And then part of its the Black Lives Matter Movement. I’m getting a ton of attention right now. I’m not stupid. I know it’s because I’m a Black shaper. But we’re also the most sustainable surfboard facility on the planet. All those things are really important. All of a sudden I’ve got some muscle and some momentum. And I want to use it to get our messages out there that it’s bigger than just you and me. This COVID shit is so gnarly. Everybody is using plastic bags again, plastic gloves. We’re fucking ourselves here.

And you raised some funds for COVID-19 relief efforts right? Tell me about that?

Yeah, while everyone was locked up and stir crazy, we thought it’d be cool to do a board and raffle it off. In like three days we raised like $4,500 [for United Way’s Los Angeles Pandemic Relief Fund].

You’ve been asked to do a lot of press, of late. You’re an African American who surfs and shapes surfboards in a culture and industry that’s overwhelmingly white. How’s that experience been for you, being asked so often for your commentary? Is it something you do reluctantly? Did you feel prepared to do that?

You know, the day that George Floyd was killed, I was up at the Surf Ranch surfing my brains out. I was posting videos of me surfing on my Instagram, totally unaware of what was going on — I felt like an ass. I think, driving home I saw Sal [Masekala]’s post about it and was like “Oh shit.” I was like, “Here we go again.” This is nothing new for Black people. So then, the Black Lives Matter movement is getting momentum, a week goes by, and I haven’t said anything, publicly. I hit up Sal because I look up to him and I said, “Look dude, I don’t think anyone wants to hear my thoughts on racism.” He was like, “Ryan, you’re the only black shaper. There’s a green movement that is part of the larger social justice movement. You have a platform. Just talk story. Share your personal experience.” Not even 15 minutes later I had an interview with Stab. And when that interview came out, my phone was blowing up for days. I started being more vocal about my life experiences. It really lit a fire under me. That’s when I got together with Sal and Danielle Black Lyons and my buddy Hunter Jones and we decided that our voices would be stronger together. That’s how 1 Planet One People was born. We didn’t want to leave anything out. We have Black Lives Matter covered, we’ve got environmental activism covered, we’ve got gender equality covered.

Have you been encouraged by what you’ve been seeing and hearing from people?

A lot of it is business as usual for me. I know I’m Black. People say to me, “I don’t see color.” Or, I hear the “all lives matter” stuff. That’s the biggest cop out. A buddy of mine has the best analogy for that. Like, you have a cul de sac with a black house, a white house, yellow house, brown house — all colors. The black house is on fire. You gotta put that shit out first. It’s very simple. It’s spot on.

Right. You wouldn’t say, “All the houses matter!” They aren’t all on fire.

Right. And lots of people experience injustice. Just not on the level that Black people in America do, now or throughout history. No other race has experienced what African Americans have experienced in the United States.

So how do you feel about how the surf community, specifically, is responding to the moment?

Let’s just look at the paddle out [the Paddle Out for Unity at Moonlight Beach in Encinitas on June 5] that Danielle Black Lyons organized and Sal spoke at. That thing blew my mind. And then the peaceful protests. I’m in the South Bay — so mostly Hermosa, Manhattan, Redondo. To see peaceful protests for racial justice in my backyard, most of them organized by young people, that’s been extremely inspiring to me. Not to get too political, but it’s all political. It’s an election year. And that’s what worries me. Is this movement going to last until November? Are people going to get out and vote for these changes?

But it’s been great to see more diversity in the lineup. And more awareness from the surf industry. And people reaching out. I have a bigger platform now. So I’m happy to be able to talk about these issues and stoked people are interested.

You’re not only talking about these issues, you and the organization you founded, 1 Planet One People, are raising funds to support organizations dedicated to racial and social equality, as well as climate action. Tell me about the surfboard raffle for these causes.

Yeah, this new raffle is actually going to kickoff a series of boards. Selema pitched Red Bull on it and we came up with this idea to do a whole range of boards with different artists. Earth Technologies is going to build all the boards. But this raffle board is just to kick it off. So its 1 Planet One People — with the organizations we’re supporting with that — and it’s promoting Earth Technologies mission of sustainable surfboard manufacturing.

And the board, a pretty cherry-looking egg, right? How’s that thing go?

Well, I’ve been making displacement hulls for a long time. And basically, displacement hulls turn from the center. People like the look of them and they think they’ll be able to ride them, but they aren’t very user friendly. They are full-on belly. They ride different. They trim and turn from the center. So for my mid-length shape I throw a spiral-vee and double-barrel concave through the back third. They turn off the tail better. The rails are much more conducive to turning. They are just a gas. They are so fun to ride.

Lately I’ve been getting requests to do them as twin-fins. Sal and I coined the term: The Twingle-Fin. So this one we’re raffling has the boxes for traditional, more-MR-style, upright twin fins and then a center box if you want to ride it as a single fin.

As far as your label, Earth Technologies — its the first Zero Waste Manufacturing system in the surfboard industry. There’s been a lot of talk about the intersection between racial justice and environmental justice. What are your thoughts on that?

And your business and now this organization seems well-suited to address that connection.

Oh, yeah. We’re kicking it right in the throat. The environmental aspects have been my thing for a long time. I’m not an expert on pollution or climate change, but I know how bad the surfboard manufacturing industry is for the environment. We’ve been making eco-friendly boards for the masses for 10 years now. And I’ve been educating myself on a lot of this other stuff and how connected it all is because people, I know now, are listening to me.