It’s the stuff of legend: the single-celled organisms that form the foundation of our reefs are a foundational piece in the traditional Hawaiian origin story. “In Hawaiian culture, the coral is one of the first things to be created when we look at the kumulipo, the creation story,” notes marine scientist and professional surfer Cliff Kapono. “From the evolution of the coral comes the human. When you keep going down [the line of creation] you see that from the coral comes the starfish and from the starfish comes the crab and from the crab comes the fish… all the way. Then the last thing to be made is the man.” Dr. Kapono’s own ever-evolving chain of identities significantly impacts his work. The ambassador of surf, ocean science, and aloha draws inspiration from these intersecting facets, generating his newest environmental project studying the coral reef, conveniently located just outside his homebreak. 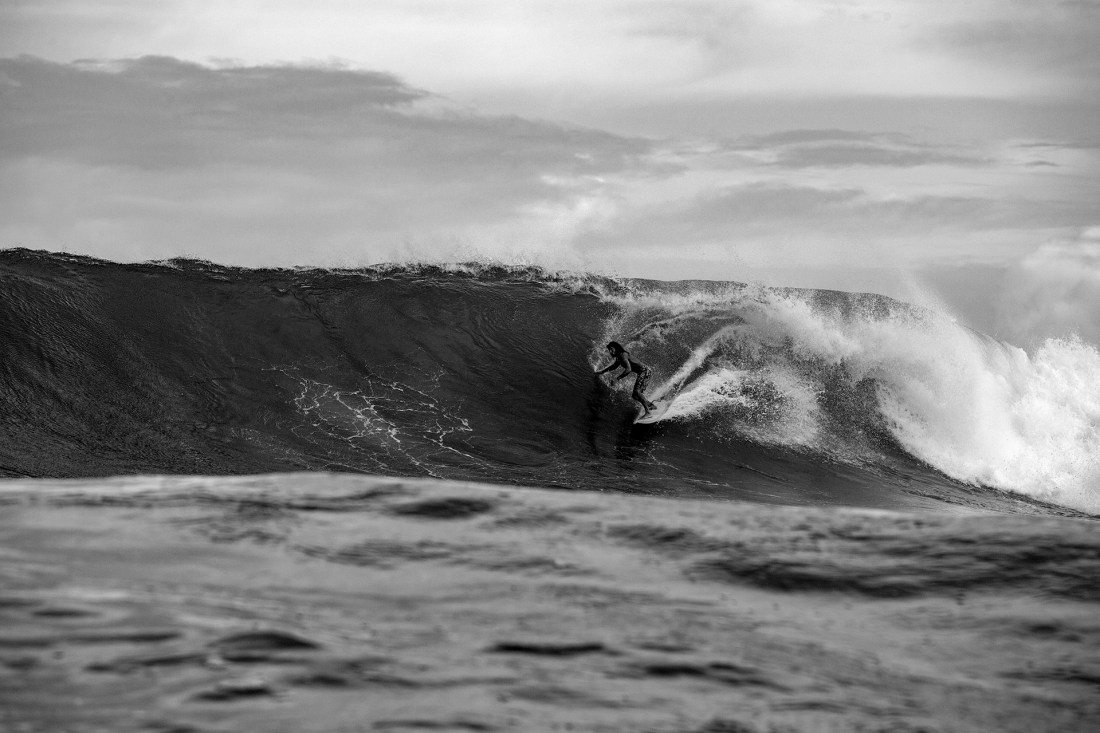 “The coral reef that I’m studying here in Hilo is the surf spot that I grew up surfing, so that’s how it kind of ties in,” says Kapono who, in October, kicked off a study of the environmental factors that hindering the reef outside Honoli’i Bay. “This place – Honoli’i – it’s a very special wave; it’s the most popular wave in town. A lot of people learn to surf there; a lot of people still continue to surf there; so it’s a really community-family spot.” Despite the wave’s popularity, Honoli’i’s reef is a thing of a mystery to much of the community. “Not a lot of people know that there’s a healthy reef out there, just outside the point and where the waves are breaking. You’re kind of surfing over these really brilliant and diverse reefs.” Swimming around this coral habitat, electric blues, brilliant purples, and a rainbow of eye-catching hues stand out against a backdrop of deep blue. Beyond the eye-pleasing aesthetic, the reef provides food and shelter for much of the local marine life and is an integral part of a balanced ecosystem. Kapono’s goal? Identify the impact changing sedimentation levels – a result of river mouth runoff, erosion, and heavy rains – have on these endemic corals. It’s a race against time as Kapono works to conserve these rare and precious organisms from the ruins of brown water runoff. “There’re corals out there that are only found in Hawai’i – nowhere else in the world. So it’s kind of a special little place,” notes Kapono.

Beyond the simple beauty of its underwater garden, having Honoli’i as a petri dish comes with a few perks: The researcher is often spotted at the break “collecting samples” by surfboard. (Seriously.) “It’s a really beautiful zone and the surf gets good so it’s a really fun project to do,” he says. “For me, it just creates a much more fulfilling experience. Even when I’m not riding a wave, just kind of being there, on top of the water [is satisfying]. And when I catch the wave, it’s like a bonus! It’s kind of like ‘I’m scoring!’”

he Ph.D is no fair-weather scientist, though. Head to Honoli’i on a blown-out, stormy day, the kind of day best spent at home watching surf clips on repeat, and chances are you’ll spot Kapono geared-up and out there, collecting muddy, murky samples. Later, he’ll take them to the lab to check for sedimentation and other run-off factors. But the windward side’s notorious rain is all a part of the project: “That’s what’s interesting with Honoli’i. As seasons change, heavy rain causes sedimentation from land run-off so the wave will be really like blue here one day and if it rains a lot it will be super dark brown, kind of like what happens at Waimea once or twice a year, but this happens in Hilo multiple times throughout the year,” explains Kapono. Back at UH Hilo’s John Burns MEGA Lab, Kapono studies and charts his growing data collection.

This is Kapono’s daily grind for the next two years as he carefully compiles and scrutinizes temperature, rainfall, and brown-water data. Additionally, through his repeated visits, Kapono will be mapping the reef, assembling a 3D-Google Map of the corals. These modules provide intricate detail of the reef unseen by the naked eye. Because each microchange can be of major consequence when it comes to corals, it is crucial that Kapono continues to chart over time, identifying shifts and making projections based on those changes. With 70-90% projected death rate for corals, the odds are stacked against him. But with a vested interest in protecting his homebreak, the researcher, surfer, and environmentalist navigates his way through hobby and study. 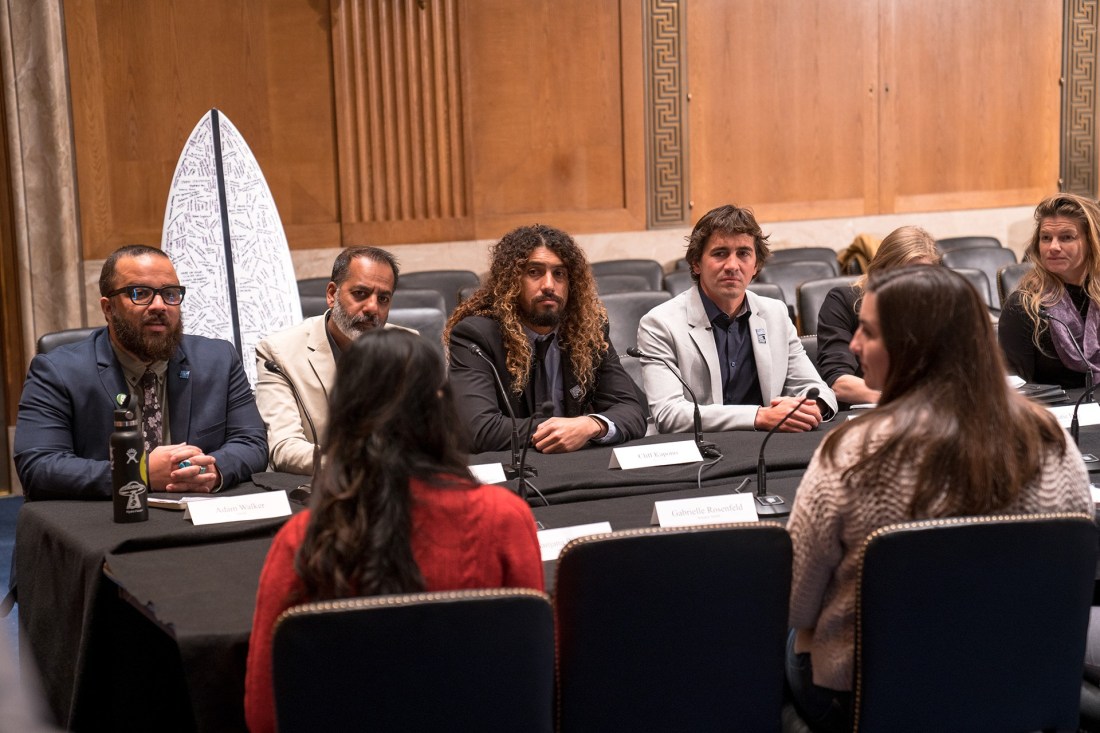 His research is a reflection of more than just his scientific side. Kapono sees the fusion between the Hawaiian tradition of surfing and his modern science practices. “There is a cultural-scientific connection between the human and the coral, outside of just using corals reefs to create waves. As the energy moves across the sea it hits the reef and it creates the waves we ride, and in a sense, it’s more cultural” he says, recognizing the link between his present-day science project and his passion for the ancient sport. “I go to Honoli’i in the morning and I surf and I have this appreciation for everything that is encompassing the experience… I’m out there floating in between sets and I’m just thinking about all the different corals that are underneath and all the different fish, even the sharks that are under there.”

Over the next two years, Kapono hopes to establish a baseline for Honoli’i’s coral community with the intent that it will be put to use for future reference, research, and, most significantly, the wisdom needed to best implement practices protecting our reefs. Kapono is working to establish a baseline for the environment crucial to a healthy progression for island corals. And with some areas in Hawai’i’s waters seeing up to 50% of their coral reefs dying off, his work is more pertinent than ever before. He encourages others to keep a daily journal just as he does. “Recording and being able to have a safe space for observation, I think, is very valuable to society today. We’re talking about climate change; we’re talking about everything moving and skipping baselines, but we don’t really have a very strong documentation of what’s going on now over a long time. So,” he urges, “as individuals, just record. Help us remember exactly what was going on with the whole environment.” 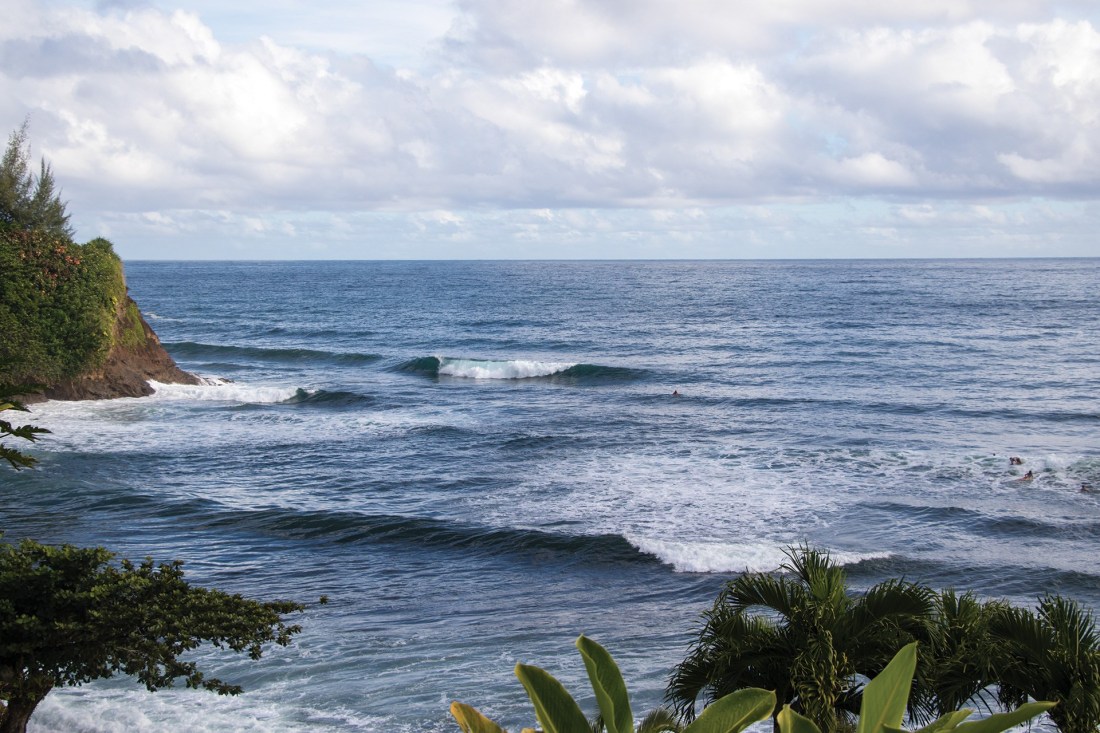 Understanding the potential impact of his work, Kapono was thrilled when he got the go-ahead to embark on this overdue journey. “I’ve really wanted to do this for a long time just because the reef is everything: It creates our islands; it feeds us – the fish that live on it are our food source; it creates waves; it protects the coast from erosion; it provides biodiversity to the ocean habitat and it also provides sanctuary for a lot of migrants to come and rest for the winter season. The reef is such a huge value to the planet.” Ever humbled by his subject, Dr. Cliff Kapono recognizes the power of this legendary ocean life force: “The coral is just an amazing, amazing thing. I feel I owe a lot of what I’m doing today to the coral reef.”