From Bad To Worse For World Skate 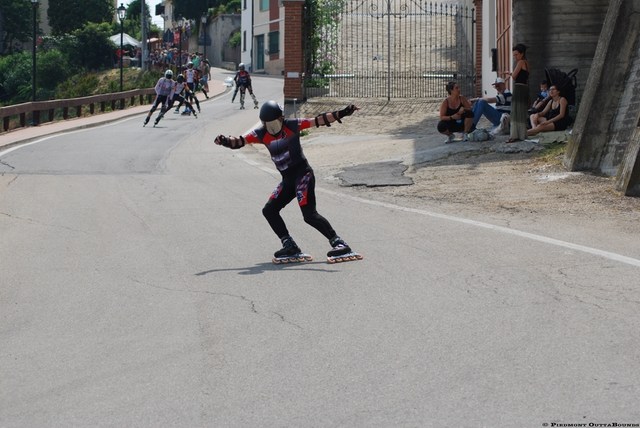 While the Olympics, and Olympic Skateboarding, have been postponed, these transmissions on the subject are still of relevance. These stories have never been about Olympic Skateboarding—the idea is absurd, but it’s happening and “you can’t put the genie back in the bottle”—no, they’ve been about skateboarding’s international governing body, World Skate, and specifically about the group of rollerbladers (formerly known as, Rollersports) that control that organization. Their presence in skateboarding is cause for concern far beyond the Olympic event that happens every four years and these stories detail why. I hope you’ll continue to tune in.

The argument that was made at the outset of this Olympic Skateboarding debacle was that it would be best to bundle Skateboarding into World Skate because the Rollersports staff is better equipped to navigate the Olympic landscape. While none of their disciplines have become Olympic sports, it’s not for a lack of trying—Rollersports does indeed have a relationship with the Olympics because they’ve been trying to garner an invitation to the Games for nearly a century, but without success.

So, sure, the Rollersports people at World Skate do indeed have a long history with the Olympics, BUT they don’t have any actual Olympic experience on their resume. I would also add that the disciplines they govern are generally unpopular, continuing to decline in popularity, and have very low participation numbers. In short: everything they touch seems to turn to shit, yet somehow they are more qualified to govern skateboarding than skateboarders?

All of the images in this post depict one of World Skate’s other 11 disciplines. This, for instance, is probably the simplest sport in their organization, “Inline Downhill.” Looks like it’s downhill racing in rollerblades?

They aren’t. And it’s playing out exactly as one would expect from an organization that has no idea what they’re doing and no experience with the culture they’re trying to govern. Even before the Coronavirus pandemic postponed everything, their incompetence was on full display. For one, they decided to host and produce all of the remaining Olympic park qualifying events themselves, despite the fact that they have never hosted a skateboard event of any kind ever.

First, have a look at their original schedule for the remaining 2020 Olympic qualifying events and note the dates and locations. Obviously all of this is cancelled now, but this was their official schedule before the postponement—it’s insane. 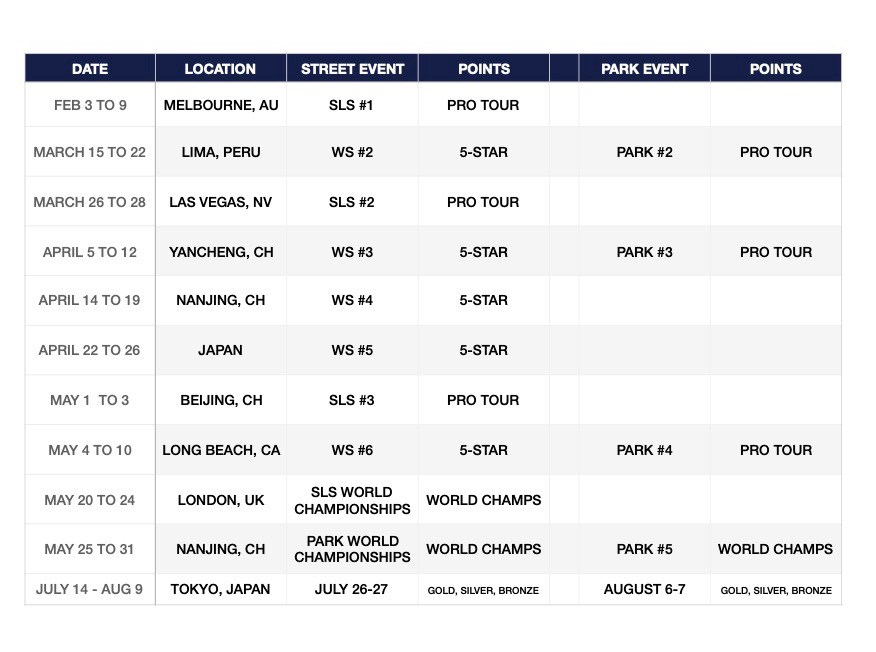 Do you realize how much travel and skating is involved in that schedule? Granted, the entire Olympic Skateboarding thing has been a rush-job from the get-go and they’re scrambling to meet all of the IOC’s qualification requirements, but, still, this is ridiculous. How do you think that’s going to work out? If you guessed, “not so good,” you’re correct!

The first contest was actually a sanctioned Street League contest in Melbourne, but SLS/WS cancelled it less than two weeks before the contest citing the Australian brushfire disaster. Curiously, though, the Australian Tennis Open was occurring in Melbourne at the same time and the tennis players, who were competing outdoors, weren’t experiencing any kind of health issues related to the fires. 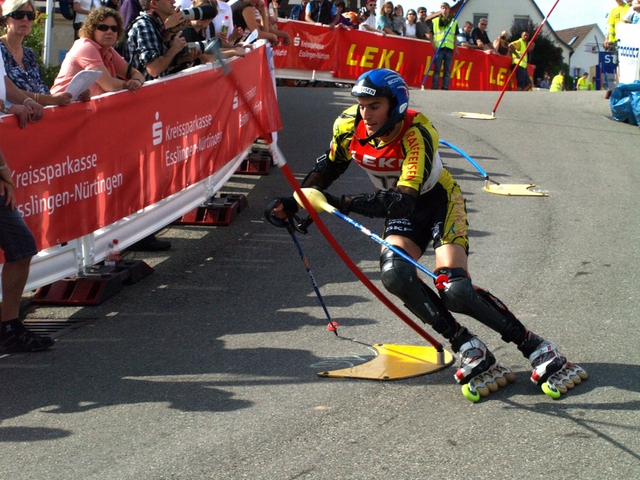 “Inline Alpine” is one of World Skate’s more interesting mashups: it’s basically “Inline Downhill,” but with the addition of slalom poles (skiing) and catcher’s equipment (baseball).

Then, shortly after the Melbourne cancellation, it was announced that Street League and Nitro Circus were purchased by a pair of sports investment groups that include members who are owners of the Boston Celtics and the San Francisco 49ers. Which, of course, brings the brush fire excuse into question: Event is cancelled under peculiar circumstances, then the event organizer is purchased a week later in a multi-million dollar package deal? Curious.

The next contest, scheduled to take place in Peru in mid-March also ran into trouble when it was discovered that the Costa Verde skatepark World Skate had constructed for the event on a Lima beach was sinking into the ocean. From what I understand, they cut corners by hiring local, yet inexperienced, labor to build the park. California Skateparks has since been hired to “remodel” the park (read: fix World Skate’s mistakes). 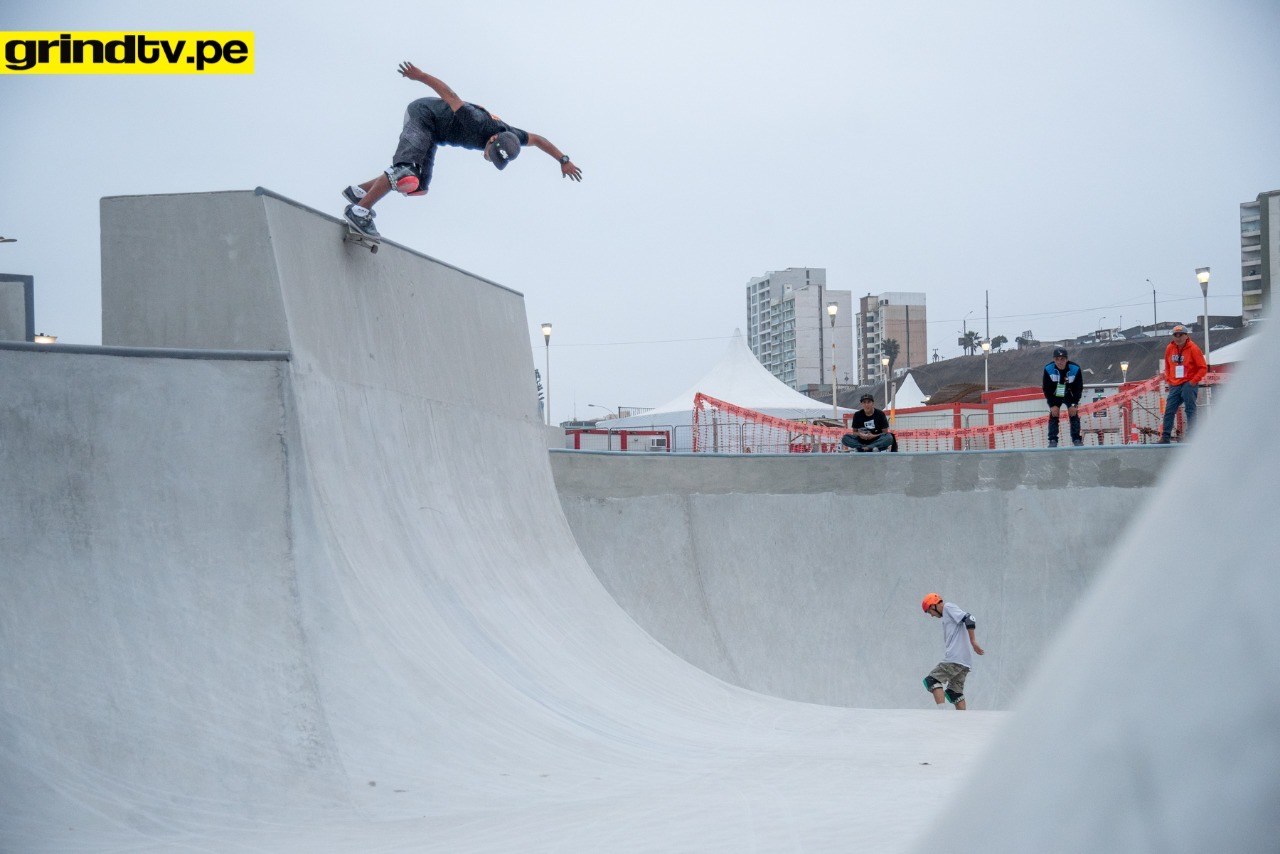 And this is where it’s so easy to see how World Skate’s greed is fueling their poor judgment. Instead of going through established skateboarding avenues with respected members of the skateboard community to help organize these events, World Skate has decided to do it their way by using their sketchy rollersport connections in locations like Peru and China that are largely unfamiliar with skateboarding, not to mention notoriously corrupt. 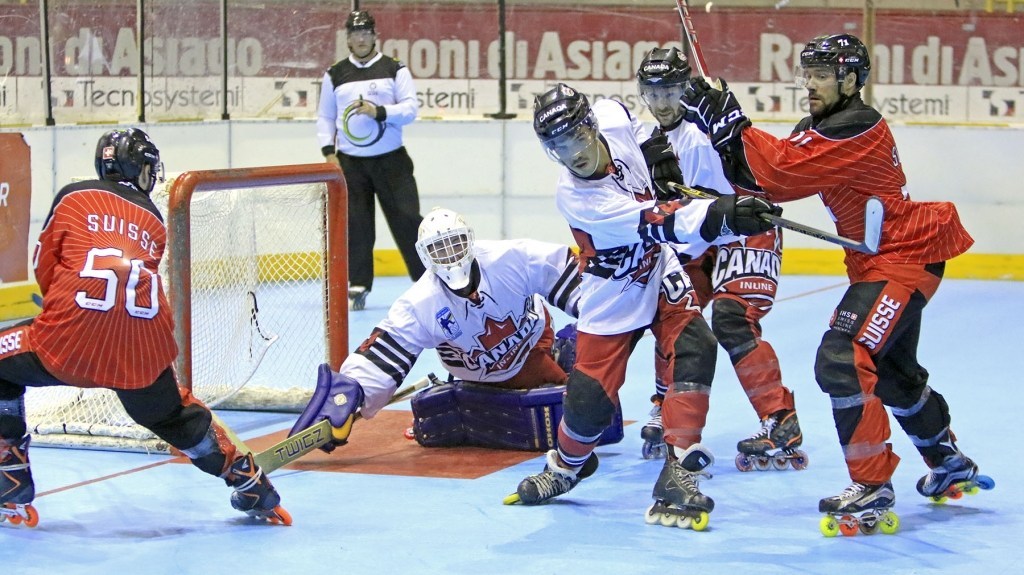 As an ice hockey fan and former player, I’m kind of offended by “Inline Hockey.” It’s like Canadian football: what’s the point?

The decisions they’ve been making are baffling and show just how unqualified they are to be in a position of governance. Given the time-constraints that World Skate was under to meet qualification deadlines, for instance, wouldn’t you reach for the lowest hanging fruit and choose competition destinations with the least amount of problems? Why would you choose Yancheng, China as a location for a skateboard contest? Of course, there’s nothing wrong with introducing skateboarding to new regions throughout the world, but I get the feeling that wasn’t part of World Skate’s motivation.

I interviewed a spokesperson from Rollersports in 2003, soon after they proclaimed themselves Skateboarding’s governing body. The spokesperson, a friendly, affable woman, was very candid about her organization’s motives—too candid, in fact, because I understand she was fired shortly after the interview was published (she will remain anonymous here). 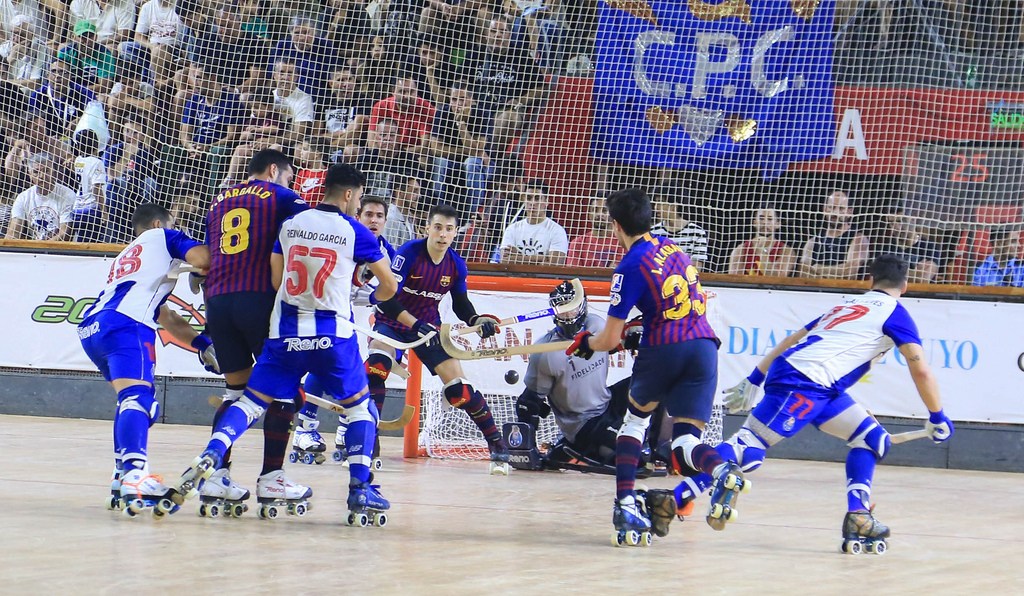 Things become even more curious with the discipline of “Rink Hockey” because I think it would be better described as “Roller Field Hockey” since they wear roller skates and play with those adorable little field hockey sticks.

“Many mistakes have been made within this organization from the beginning years, and in the years before my employment,” the Rollersports spokesperson said early in our conversation. “We have the sports of figure skating, speed skating, roller hockey, hardball hockey, recreation skating, jam skating, and marathon skating, as it stands now. From what you can pick up, a lot of those sports don’t meld all that well together. It just so happens that all of these sports are rollersports so that makes them all fit under our umbrella.”

I pointed out that this rollersport umbrella is completely arbitrary and a fiction of their own creation—as she implied herself, all of their sports are on wheels, but none of them really have any relationship to each other. Golf and soccer are both played with balls, but they are completely unrelated and have separate organizations for their governance—any normal person would agree that the idea of golfers governing soccer, or vice versa, is absurd.

Perhaps one of the spokesperson’s most telling responses was when I asked about their Olympic experience: “Is roller skating an Olympic sport?” 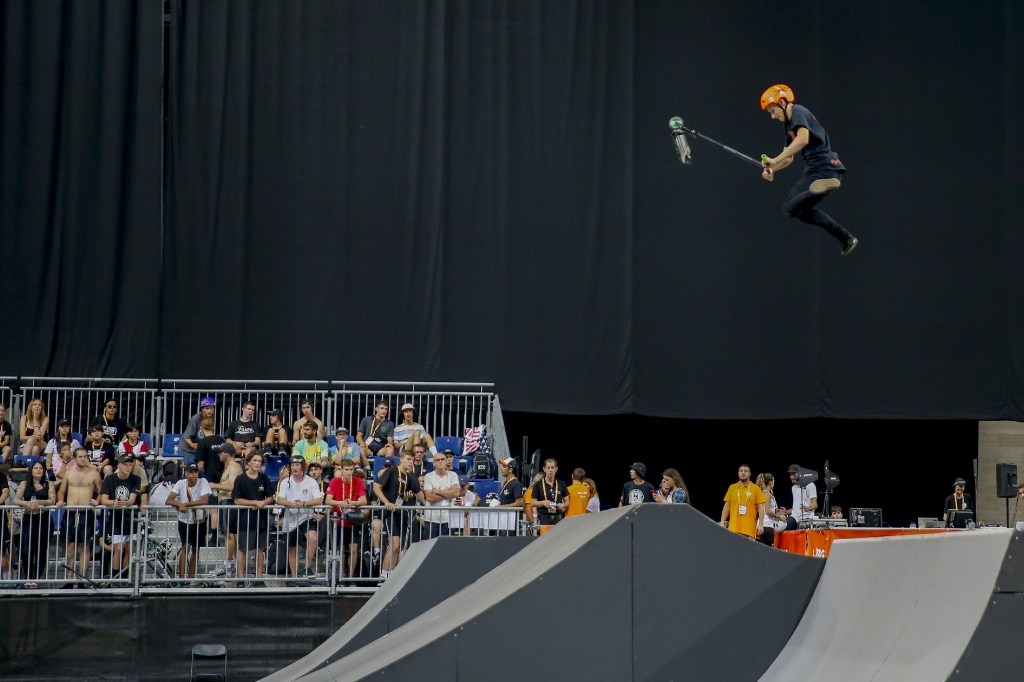 And then there’s every twerp’s favorite: “Scooter.” You know, have fun doing whatever it is you enjoy, but I can’t understand how anyone can ride a selfie stick attached to a two-wheel skateboard and not feel just a little embarrassment. Like this kid: I want to show him this photo when he grows up and go, “Look at yourself, look what you did…”

“We’re a Pan Am sport,” she replied. And then offered a very interesting admission: “We maybe haven’t done the best in promoting our sport. We’ve fallen down on the job in the past. And yes, it appears that we came out of nowhere with all of this. We aren’t trying to offend anyone or anything else, but we failed our sport. We’d like to correct that.”

“Well, correct it with your own sport and leave skateboarding alone,” I said.

And if Rollersports’ motives aren’t clear enough, her answer to my rather blunt question, “What the fuck are you guys doing?” should clarify what the fuck they’re doing. 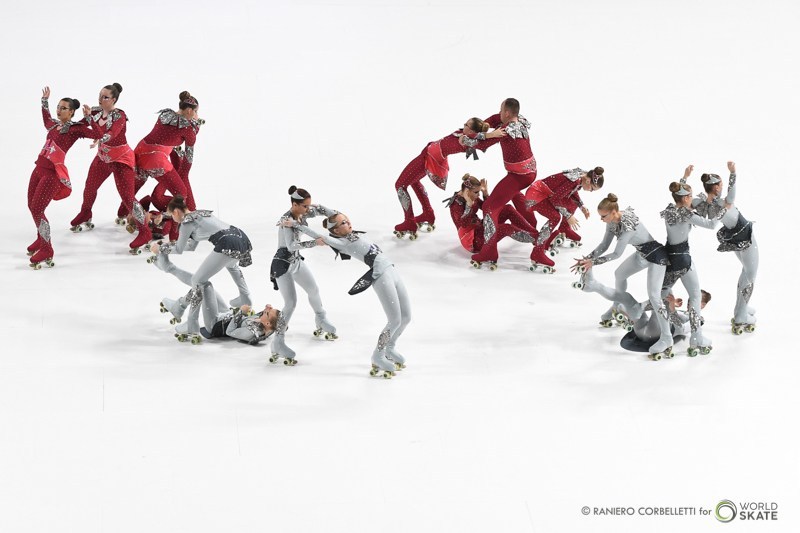 Despite whatever is going on in this image, “Artistic” is probably the one World Skate discipline that, on paper, is closest to skateboarding: they roll around, they glide and turn, they do tricks, there’s no finish line, there are no goals/points, and it’s up to the participant to decide what they want to do. Of course I said “on paper” because in reality skateboarding is sorely lacking in the whimsical pageantry that characterizes the Artistic discipline. 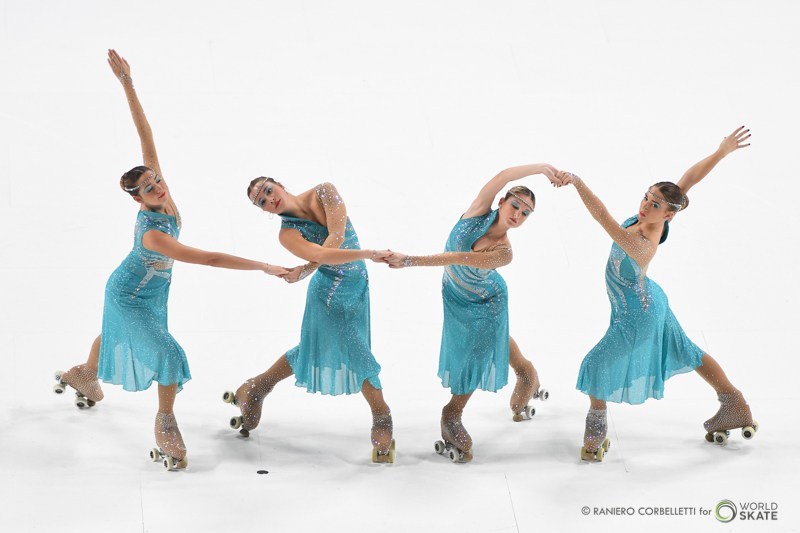 Like the previous Artistic image, I have no idea what’s going on here, but maybe they’re trying spell something: “LXSV?” That’s not a word. Maybe it’s an acronym? Lugubrious Xerophiles Support Vasectomies? Sure, close enough. [Xerophile: plant or animal adapted to a very dry climate where moisture (like ice?) is scarce.]

While that interview took place circa 2003, the current president of World Skate and retired rollerblader, Sabatino Aracu, was also president of Rollersports then. He and his organization’s behavior over the years since has left little doubt that their attitude and strategy has not changed: they are “trying to get a piece” of something they know very well doesn’t belong to them and they know nothing about. 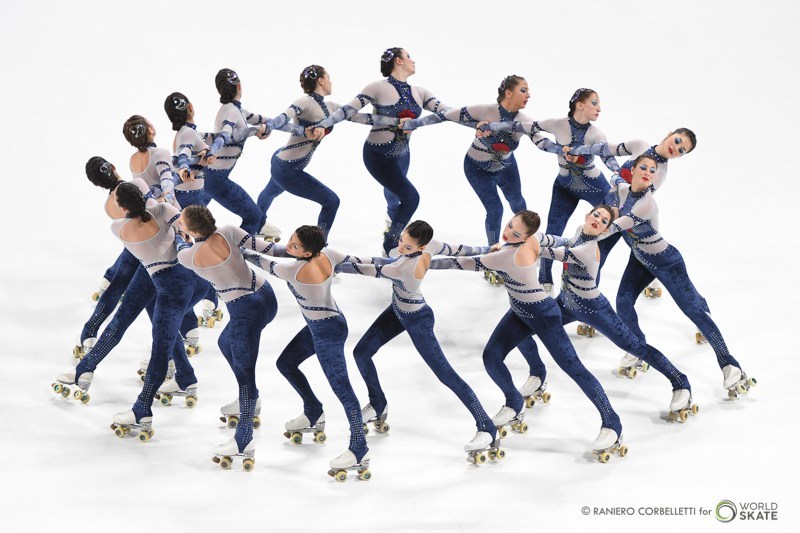 Whoa, trip out! Wheels within wheels, man. Circles, it’s all about circles of life.