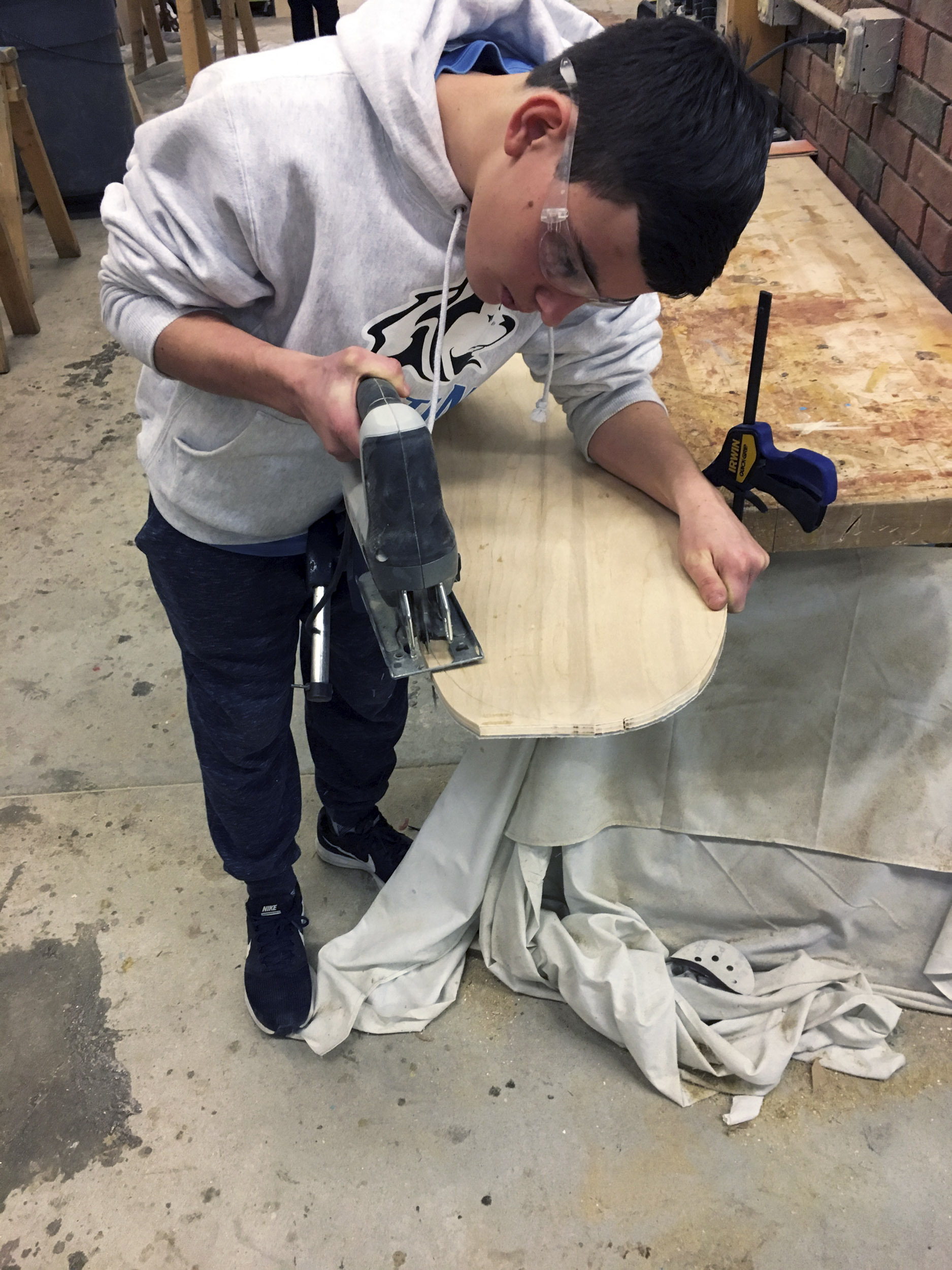 Conceived in 2012 by Bill Curtis, a teacher in Grand Rapids, Michigan, Gone Boarding is a high school curriculum that applies the tenets of STEM learning to the creation of skateboards, surfboards, and snowboards, bringing new meaning to the term “higher education”. While teachers at every level, from kindergarten to college, are currently navigating a new normal where in-class instruction is supplemented by online studies, there is no denying that unprecedented levels of stress and distraction have made it ever harder to get kids to get motivated to learn, stay engaged, and apply themselves. This is where Gone Boarding emerges as uniquely suited to meet these challenging times. By using an existing passion, like snowboarding, to provide the real-world application of science, technology, engineering, and mathematics, educators like Bill Curtis are able to unearth more practical interests beyond merely learning how to do a textbook method. SNOWBOARDER recently had a chance to connect with Bill to discuss how Gone Boarding came about and where he wants it to go in the future. – Pat Bridges

Our first exposure to your program was from a social media post by @bangor_ gone_boarding, but the program is bigger than just one school.
Yeah, we have sixteen schools total and Bangor is one of them. I’m an educator. I started the program in my home school, Forest Hills Eastern High School, which is in Grand Rapids, Michigan, in 2012. We ran the program there for three years, had tremendous success and saw students come alive in terms of what education can be. I was challenged by one of my administrators at the time to try to bring the program to other schools. Bangor was the very first school outside of my home school district to adopt the program, thanks to Mark Meyers. He’s doing a great job and they’re really flourishing down there. But yeah, sixteen schools total. Twelve of them are in Michigan, two in Indiana, and we have two out in California.

Are you a snowboarder, skater, surfer? What’s your background?
I do all three now, but was a very traditional athlete growing up. I actually played baseball at Grand Canyon University and then for the Angels’ minor league team for three-and-a-half years. Quite honestly, I never stepped on a board until I was probably 30. I had a friend out here who introduced me to snowboarding as a way to get through the cold, gray winters of Michigan. That very next summer, I was out visiting some family friends in Newport Beach and they took me out surfing one day and immediately I caught the bug. That was right around the same time that I was feeling a little bit stale in my teaching job and noticing a complete disengagement from high school students, so I started brainstorming with my friend Bruce Macartney. I was teaching phys ed and he was teaching industrial arts. We had this group of five kids that we both had in class, and every time it snowed, they would not be in school. One time I just asked, “You guys are skipping school. What’s going on?” They were upfront with me and said, “When we get six inches of fresh snow, we’re going out riding, we’re not going to be in school.” So we started thinking about how to bring that level of enthusiasm into the classroom. Like I said, it was the perfect storm of when I started picking up the sports and when we figured out that this was where our kids were at. If we bring this into the schoolday, we can pull kids into education that is meaningful and relevant to them. Some of our schools actually have a formal phys ed component as well, where there are teachers getting out there and instructing kids. 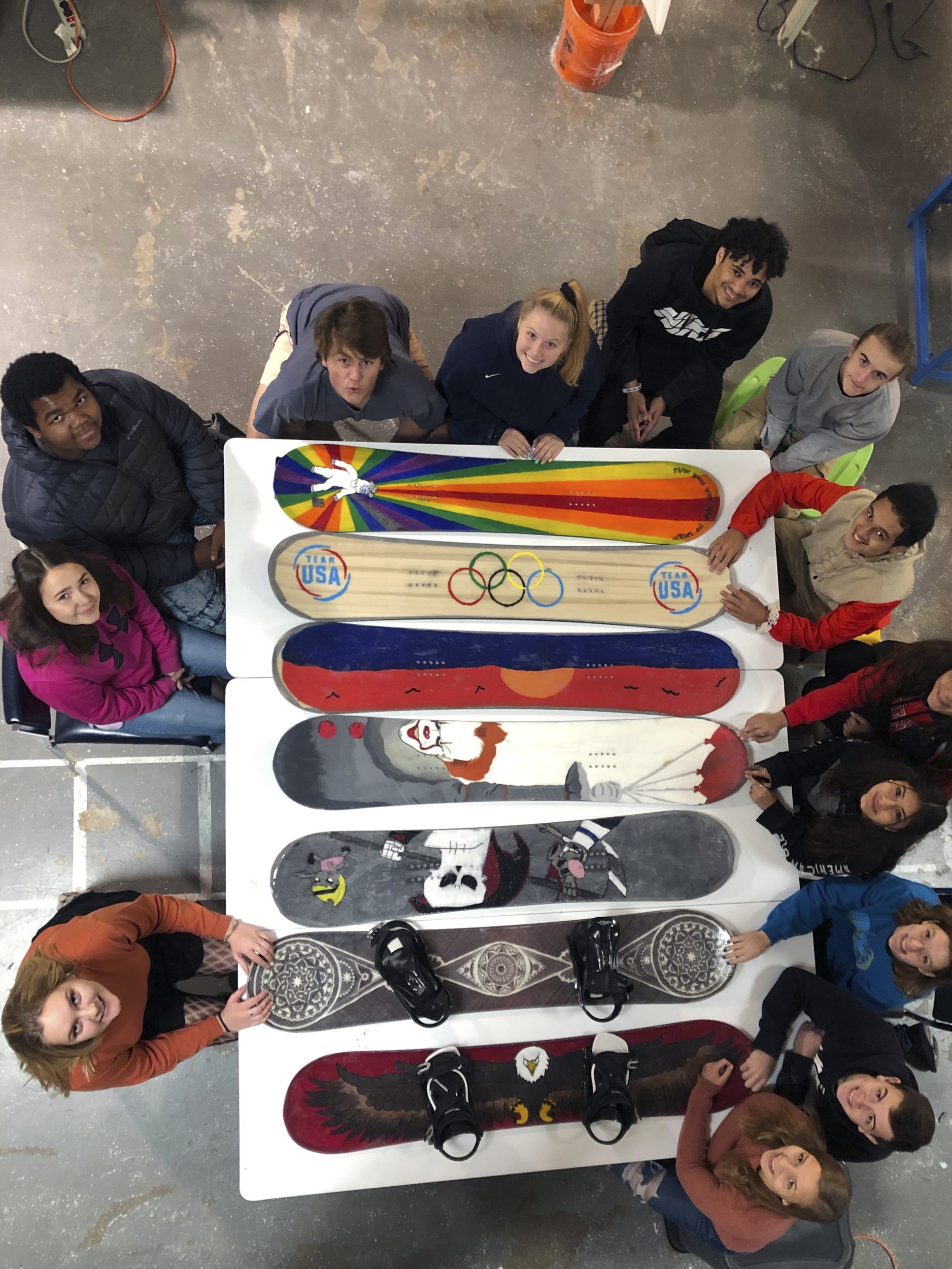 Is this extracurricular or is this an actual class?
It’s an actual class. We’ve aligned it with standards, so depending on the school, kids can get what is called a VPAA, a Visual Performance Applied Arts credit. In the school that I’m still teaching in, kids actually get a math credit for the Gone Boarding class. If they’re doing the physical activity, kids would get a PE credit, as well. It’s a cool concept because there’s so much curriculum that goes into building all of the boards with science, math, and engineering.

When did Gone Boarding start making field trips to go see the inner workings of companies?
It’s another one of those perfect storm stories. The very first year we offered the class, we had a kid whose uncle was the Midwest sales rep for Burton. My student was talking about this class, and his uncle was like, “Whoa, whoa, wait, time out. Back up a couple steps. What are you doing in school?” So this guy, his name is Matt Hoffman, ended up inviting us over to his showroom in Chicago. A year later, I took a group of twelve kids out to Burlington, VT and that’s where we met Jeff Boliba, who is the Burton VP of global resorts. Jeff is a real visionary, so I think he saw the potential in it from day one, and he helped dial in some of the initial contacts with brands on the West Coast, as well. In fact, I think the first person he got me in touch with was Dave Downing. Dave and I spoke, then it was kind of a domino effect from there. So I take a group out to VT every year now, and it’s gotten bigger. I think this year we were close to thirty kids. We’re usually there for two days, so if you can imagine two full days from nine to five, the kids aren’t just seeing the production side of things. They’re meeting with the marketing team, the event planning team, the graphic designers, the engineers, soft goods, the Anon crew. They’re also going into the back of Craig’s Prototype Facility where they’re doing the product testing. You take kids there and it’s like trying to give them a drink out of a firehose because those guys have been so awesome at opening up their doors. It’s two full days of trying to hit every department that we can. When we go to the West Coast, it’s a little different because we are trying to bounce around and meet with quite a few different brands. We always hit Vans, we’re usually there for a half day. We always go to GoPro, as well as Red Bull, for about a half a day. 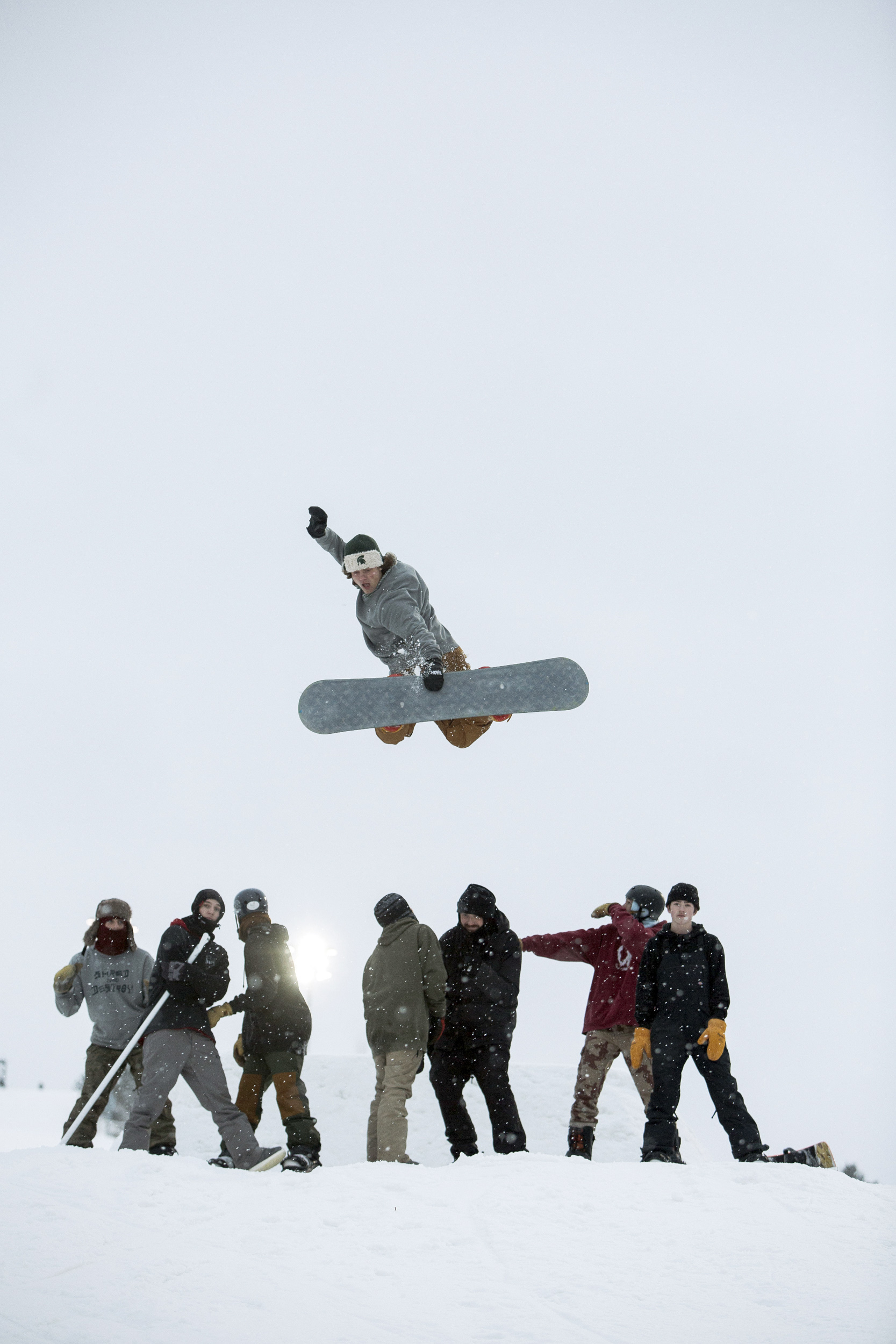 The kids actually build the boards and put them on snow. What is that experience like? That’s probably the most rewarding part of this whole experience for me. Some of these kids, quite honestly, have never ridden before, so this is a first experience for them. It’s something they’ve seen and want to get involved in. Typically, what we do is we’ll get them out riding in the early stages of the design and development, because we want them to get that vision. Virtually every kid we have is a first-time shaper, first-time snowboard builder, so they’re not producing the same quality of boards, but you would never tell that when you ask them. They’re like, “This is the best board I’ve ever ridden,” and I think that’s because of the pride that goes into it. In snowboarding, they’re hand-bending all the edges. They’re doing all their own graphic work. I think the pride, craftsmanship, and ownership just comes out when they’re actually able to ride it for the first time.