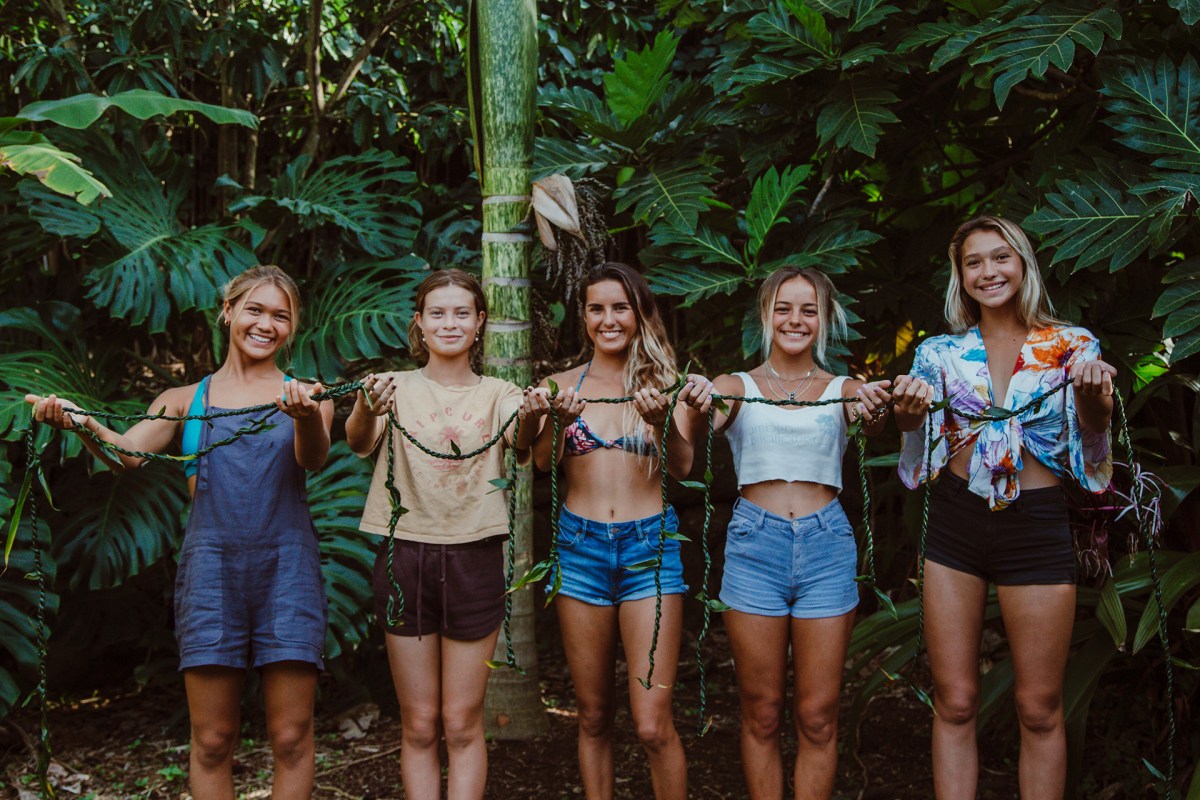 Hawai’i wahine are reclaiming their place in the waves as their ancestors did, despite a lack of representation in the overwhelmingly male-dominanted sport of surfing and cultural practice. The story of women’s reemergence in Hawaiian surfing was recently told through the friendships of five ladies who share a love for the ocean on the island of O‘ahu—Moana Jones Wong, Vaihitimahana Inso, Hokulani Topping, Ēweleiʻula Wong, and Puamakamae DeSoto. Filmed by an all-female cast who call themselves the Gnar Gnar Honeys, the “Kaikaina Surf Girls” series launched on TOGETHXR’s platform this spring, telling the lesser-told story of women’s inherent place in the waves.

“Today, surfing is a male-dominated sport. However, in our moʻolelo, surfing was our national pastime; everyone participated in it. Although Hawaiian society was hierarchical, and that included the tradition of surfing, exclusions were based on rank, not gender,” Ēwe Wong explains to Freesurf Mag. “Many of our surfing moʻolelo of the past are about women. In other words, women were revered for their skill and ability as surfers.”

Thankfully, Kanaka leaders are protecting their sacred heritage rights both in and out of the sea: “Hawaiian women continue to be leaders in our community in the sovereignty movement. We also continue to thrive in all disciplines of the ocean as waterwomen,” says Pua DeSoto. “Hawaiian society was traditionally matriachical i ka wa kahiko (back in the days), family systems were established around the female lines. Iʻve been lucky to have many badass Hawaiian waterwomen to look up to.”

The mentorship and guidance from strong female role models is a stepping stone for Hawaiian women to thrive once again in a new landscape, one that is just starting to make room for the female surfers who want to pursue the sport as a career. This comes after a 15-year gap of female-inclusive surfing events during the North Shore competitive season, for example. Under the influence of Rell Sunn, Melanie Bartels, Kelia Moniz, and Carissa Moore—to name a few—Hawai’i’s keiki have many role models carving a path for success.

As we count down the days to surfing’s Olympic inauguration, Hawaiian Carissa Moore is well on her way to perform on the largest global stage the sport has ever seen. Her journey to the top as a four-time world champion and qualified Olympian is opening doors for other Hawaiian women pursuing the dream as professional athletes. Spreading Aloha to the world at large, Moore’s influence and mentorship has inspired a new wave of female surfers. Following in her footsteps is the next generation of wahine, deeply rooted in Hawaiian heritage and empowered by their sisterhood.

“Whenever I think of Hawaiian surfers, I think of Carissa Moore. She is not only one of the best surfers in the world, but also shows her Aloha spirit by giving back to the younger generations of female surfers,” says Vaihiti Inso, a junior competitive surfer who’s also proving her skills in the competitive arena. “It’s also so inspiring to see women like Moana Jones Wong charging Pipe and running surf lessons for the little keiki on the North Shore.”

A crucial parallel with each of the series’ five characters is a deep spiritual connection to the land and the sea: “Mālama ʻāina (caring for the land) is a Hawaiian custom that has been taught to me since I was little. I think my connection to my culture (including surfing) has deepened my understanding of my kuleana to care for my ʻāina and kai,” says Ēwe Wong.

“Women have mana (spiritual power) from giving birth and creating life. But, these arenʻt just things of the past,” Pua DeSoto shares. “The ocean is what connects me to the world, so it gives me roots and wings! I like to say that it’s my church; it’s my safe place where I can be myself. I love my pilina, or connection with the ocean.”

The need to share culture and Hawaiian heritage through today’s popular mediums (such as digital platforms like YouTube and social media) are critical for the survival of the Hawaiian language, especially considering the generational trauma of colonization and threats of globalization. Storytelling about women’s history in this creative and beautifully captured documentary series represents a resurrection of empowered wahine fighting to stay connected to their ancestors by way of the sea.

“In order to set goals for the future, we must reflect on the past,” says Ēwe Wong. “There has been a limited amount of female representation in surf media in complete contrast [to how many women participate in surfing]. We are gradually moving in the right direction, portraying female surfers in the media as serious athletes. The Gnar Gnar Honeys [production team] are part of the movement, making an effort to highlight native Hawaiian female surfers.”

Partnering with the new digital platform founded by four Olympic champions (such as US Soccer team’s Alex Morgan and snowboarder Chloe Kim), TOGETHXR represents a need for empowering content for a more diverse audience of sport fans: “TOGETHXR is a brand that recognizes the power of an intentionally intersectional, diverse group of voices and stories. We believe in storytelling to be an impetus for positive social change,” says the platforms’s Chief Content Officer, Jessica Robertson. “We’re finally having some of the social and cultural reckonings necessary to propel these women forward. We’re here to celebrate women as culture shapers and give platform to the voices that have been marginalized for too long.”

We asked the documentary’s cast how the community could help support this upwards momentum. Proper representation and equal opportunity were expressed by all:

“There is still a long way to go,” Hokulani Topping reminds us, “because women and girls don’t have the same level of sponsorships or opportunities to participate in as many competitive events as men.”

Vaihiti Inso adds, “I would love to see the same amount of women on the World Tour as men.”

Ēwe Wong comments, “I would like to see more female surfer films, so it is not a challenge for the next generation of female surfers to see themselves represented in sport.”

The “Kaikaina Surf Girls” series is one more step forward for women’s representation in surfing, unique in its objective. With Hawaiian heritage as a focus, the process of gathering an all-female cast with all-female talent is rarely accomplished in today’s production world. In front of and behind the camera, this production environment allowed for vulnerable and heart-felt storytelling through the lens of the marginalized women who all too often remain voiceless in a male-dominated industry.

“I felt very empowered while filming because the entire crew was female. It felt very natural to be able to act as ourselves and tell our story. Shooting was a very fun and enlightening experience,” shares Hokulani Topping. “I am the sixth generation of Hawaiian women surfers. Being able to share some of that history and having the story told was pretty amazing.”

Empowered and proud of their identity as Hawaiian women, these surf girls will help the sport reach new heights on the islands, just as Carissa Moore introduces the sport to the mainstream audience through her dreams of Olympic gold.

“And we continue to redefine women’s surfing just as our ancestors did,” said Pua DeSoto.

Be sure to watch the “Kaikaina Surf Girls” series via togethxr.com