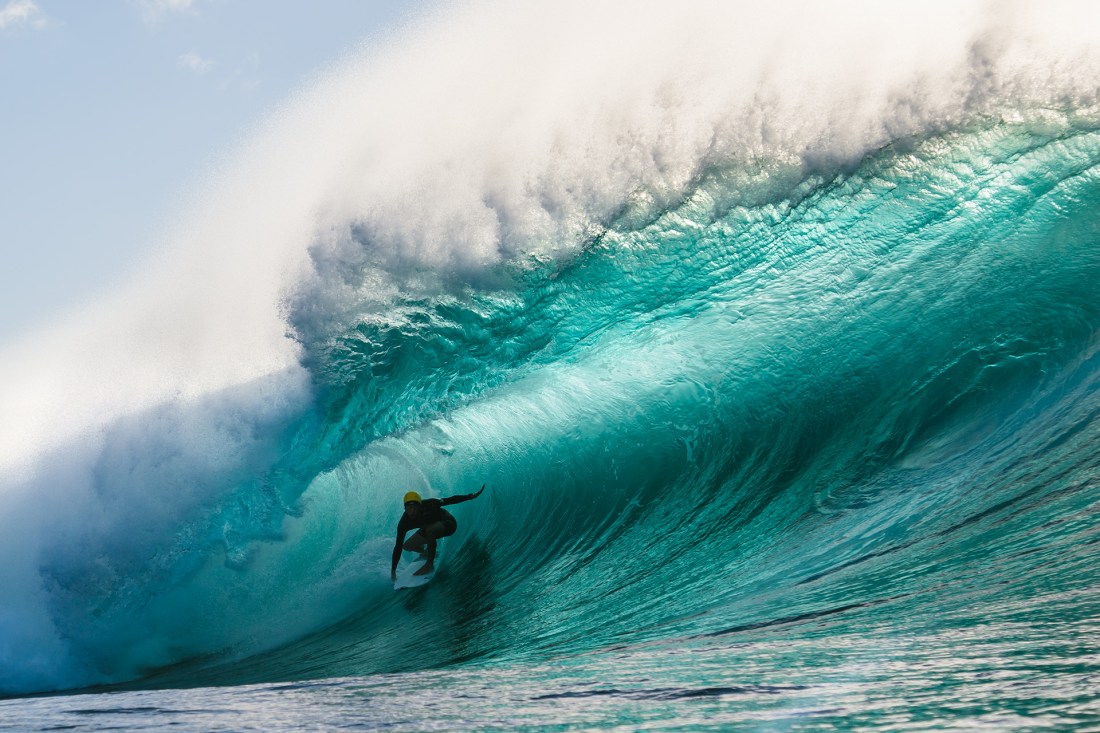 Kalani Rivero is not a new name or face to the crowd residing on the North Shore of O‘ahu, but to outsiders he has never been in the limelight as some of his closest friends are. Perhaps it is because he started surfing at an age when many of his neighbors and friends were already competing. Perhaps it’s the fact that his surfing is propelled by his quest for those few seconds of perfect bliss rather than fame. Or maybe it is because he chooses to surf events that fit his personality and surf style, rather than simply because it is a big event. Whatever the reason, Rivero’s free spirit and love for the ocean has created the happy person he is today.

Living in paradise, it is easy to take the beauty of Hawai’i for granted because we witness it every day. Growing up and spending most of your time here, it’s even easier to forget just how rare and magical these islands truly are. Gaining perspective can happen by traveling, reading or watching documentary films, or simply through humbling experiences. Kalani, like many of us, once took his beautiful life on Sunset Beach for granted, but in recent years, has made a conscious effort to take note of his place within the world, what he is doing with his time, and the people who fill his days. Taking time for reflection helps him to appreciate and feel gratitude for every moment he has.

When speaking with Rivero, his age seems to contradict his heightened level of self-awareness and emotional intelligence. Much of this can be attributed to having a lot of alone time as an only child to parents who encouraged him to be himself, while also teaching him the value of hard work. As a kid on the North Shore, Kalani was consistently surrounded by older kids and adult friends who felt like family, but also shared their wisdom and served as role models. “The North Shore raises you. If you are open-minded and positive, you can learn a lot from this place. A lot of special stuff has happened here. If you’re like a sponge, you can absorb it and put it into your game.” He was simultaneously surrounded by friends his age like Kalani David and Moana Jones, who fit the mold of the stereotypical North Shore prodigies, surfed at the top of their game, and strived for perfection in their youth. These friends also served as role models, because they inspired Rivero to always pursue what he loved.

At the elite level, when you are pushing to your maximum limit, failure and difficulty are more typical feelings than success and satisfaction. We fall, we hurt, we suffer, and we struggle over and over again, but when we feel passionate about something and we are striving to be the best we can be at that something, our effort is relentless. For Rivero, “Surfing is one of those sports where I rarely get that super satisfying feeling because the ocean is always changing. It’s almost one of those things where nothing matters. Even the consequences. You want to do it so badly. You want to be in that higher level of consciousness and that’s why I love it so much.

And it’s that acceptance of imperfection and the pursuance of perfection that makes Rivero such a great surfer. “I feel like a grow as a person,” he tells Freesurf. “I don’t feel like I grow as much in any other avenue as I do in the ocean.”

But what happens when the currents shift and the world-famous North Shore waves give way to a still blue sea closely resembling a lake more so than a surf break during the summer months? spearfishing! To Rivero, “Diving and surfing go hand in hand. Like yin and yang. When it’s flat I dive, big I surf. They both balance each other. Even with the breath hold, having that mentality when I go surf, it teaches me to have more confidence, and prepare more, be more alert.” Rivero, now twenty-two, has been fishing since the age of eight. Like surfing, when Rivero is diving for a prize fish, he is pushing himself to his limit, approaching this act as he would a strategic game of chess. The mental and physical effort is relentless, often with little reward. Unlike surfing, which he does for himself, he fishes to share the experience and catch only what is needed to provide a good meal for his friends and family. While the final result of fishing is a group experience, the act itself is even more personal and often more scary than surfing for him. When you’re beneath the surface, “you’re holding your breath and going to the bottom with weights. If you don’t know your limits then you can drown. If someone isn’t watching you or your safety isn’t up to tee, you can drown. We’ve had many friends drown.” But just like with big waves and dangerous surf breaks, “you know the consequences, [but] you love it so much you do it.” Aside from the personal danger, there is a mental battle rarely faced by individuals these days— staring at an animal and taking its life. “You’re killing an animal,” Rivero describes, “so when you do that, you have to think about all the things that go into that. The honoring of the fish. The honoring of the place where you are. Trying to be mindful and respectful of the environment around you.”

Rivero is lucky to have passions that occupy his time regardless of the swell. “I’ve never questioned surfing or spearfishing in my life,” he tells Freesurf. “I’ve always been like, this I who I am. If you really love something, you’ll do anything for it. You’ll find a way.” Now that winter is upon us, you’ll catch Kalani starting his day with a coffee from the Sunrise Shack, followed by surfing his Mike Mattison boards and filming with his friends at breaks like Pipeline, Backdoors, Sunset, or Rocky Point.

To leave us with a final tidbit of wisdom- “Everyone has their own path. They choose what they do. If you’re one of those people that are humble, respectful, and open-minded, you can be fine anywhere. If I’m 100% myself and 100% the best I can be, on land and water, it doesn’t matter where I am, I feel like the main goal in life is to be that person.”

** Rest in peace to Kalani David. A friend, a brother, and of the best to ever touch a surf or skateboard. You will be truly missed in my life and the lives of others. I’m honored to have witnessed such pure raw talent. There will never be another like him! – Kalani Rivero