Kelly Slater Talks Magic Boards, First Peak and Which Two Waves Should be on Tour 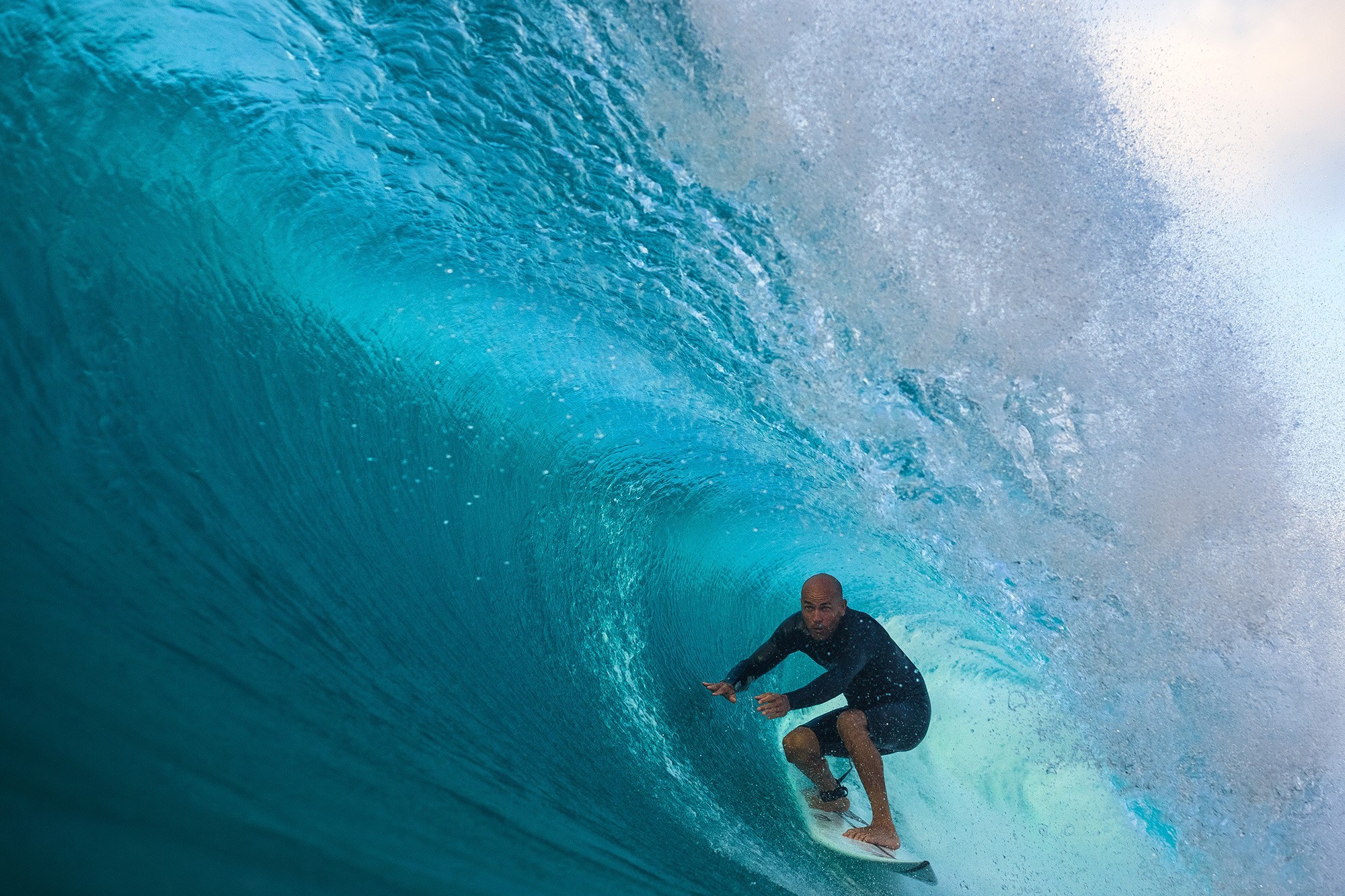 When we first started this “Ask Me Anything” interview series, in which anyone and everyone can lob questions at their favorite surfers on our Instagram page during this time of quarantine, Kelly Slater seemed like an obvious pick. For one, the 11x World Champ seems to have the memory of an elephant, always able to recall important heats or minute details from the past three decades he’s been on Tour — which usually makes for an interesting interview. Secondly, judging by the number of times he’s serenaded his followers on IG over the past couple of weeks, it seemed like the GOAT had loads of time on his hands to do something like this.

Unfortunately, upon signing up for this AMA, there was an apparent misunderstanding about how he should provide his answers to us. After we asked Slater to send over videos of his responses in the way John Florence, Albee Layer, Jordy Smith, Carissa Moore, Kai Lenny and Kolohe Andino had done (without issue), he instead sent us his answers in written form — which you can now read through below.

Stay tuned for our upcoming episodes featuring Dane Reynolds and Mark Deaver, a San Diego-based emergency room physician and surfer who signed up to answer all your health-related Qs.

What did you do with your first-ever surfboard? (From @kruysmanscott)
My dad sold it. I would literally pay anything to have that board back. The bottom had an airbrush of Jaws. It was a 5’2” thruster (three Star Fin boxes) in 1980 made by the Salick brothers in Cocoa Beach.

If you could pick one World Title that meant the most to you, what year would you choose and why? (From @loubob69)
Probably 1998. It was my 5th in a row, which was my lifetime goal to achieve and I had to come from so far behind going into Pipeline that it was a very slim chance I could pull it off. Ross Williams took out Danny Wills and then Rob [Machado] and I had an incredible heat in perfect waves, which I won [and] that sealed the title.

Which actor would be the best fit to play you in a movie and why? (From @whosdannynikolai)
Oh wow. I have no idea. I think Joaquin Phoenix could play anybody so I’ll go with his skills over any comparison between us.

If you could surf in a six-man heat with any surfers from any era, who would you choose and why? (From @spence_mill)
MR in 1980 or so for his precision and consistency. Curren in around ’86, when he seemed untouchable and, to me, was the perfect blend of speed, style and power. Occy at the Country Feeling classic at J-Bay when he was 17. Nobody on earth ever matched that backhand attack relative to other surfers in the world. Shane Dorian at Jaws, maybe 3 to 5 years ago. Andy in 2002-2004. Dude was on a heater. Next level desire and amp combined with relentless skill. John John anytime in the past 5 years. Send location. That would make a 7-man heat but they made an extra spot for Buttons at Pipe back in the day so we’ll go with a 7-man heat.

Slater, in his natural element.

What is your all-time favorite surf film and why? (From @stokesmagokes)
“The Performers”, I think it was. It was the first signature section film ever made and the soundtrack (chosen mostly by Janice Raymond who became like a mother/big sister to me many years later) was the best in any movie ever. My buddy, Alex Cox, and I used to copy each of the sections in our following day surfs at Sebastian Inlet and imagine we were those guys in that movie. Richard Cram lays some serious rail in that film.

If you had to do one occupation other than surfing, what would it be? (From @_andrewsimmons_)
I’m not sure. I’d liked to have been a musician or golfer or a health practitioner of some sort.

Do you miss old First Peak? (From @isoulsearchnow)
Absolutely. My theory is the beach got loaded with too much sand, as did the Outer Banks which have become too shallow. They also did some adjustments to the jetty but overall I think the beach being longer and the bottom being shallower did the trick to mess it up. It was a true localized stomping ground that bred one of the best groups of surfers anywhere on earth. It’s really hurt our culture there to not have it exist like it was.

What wave should be on Tour that’s never been on Tour? (From @jessebradfordd)
Lakey Peak or Soup Bowl.

What’s the scariest flight you’ve ever been on? (From @gokayakvb)
Landing in Miyazaki in 1990 for the World Amateur Champs [The ISA World Surfing Championships]. There was a typhoon and heavy winds. There was a camera on the underbelly of the plane showing the live landing and the plane came down, front wheel first. The camera instantly shut off and I thought we had a crash landing on our hands.

What board sticks out in your mind as the most magic?(From @gokayakvb)
The next one! Haha. Always looking for that magic one. But overall it was probably the Simon Anderson I had in 2003 or 2005. I won events at Lowers, JBay, Bells and I think Teahupo’o on that board. I forgot that I had given it back to Simon afterward and searched my storage for about a year or two only to realize where it had gone.

Did you watch “Tiger King”? If so, what did you think? (From @darkcoral)
I’m just starting it.

What’s your proudest accomplishment? From @chelseasalsberg
Staying reasonably sane after all these years. Avoiding pitfalls of drugs and alcohol, especially given where I was raised and in the ’70s and 80’s. 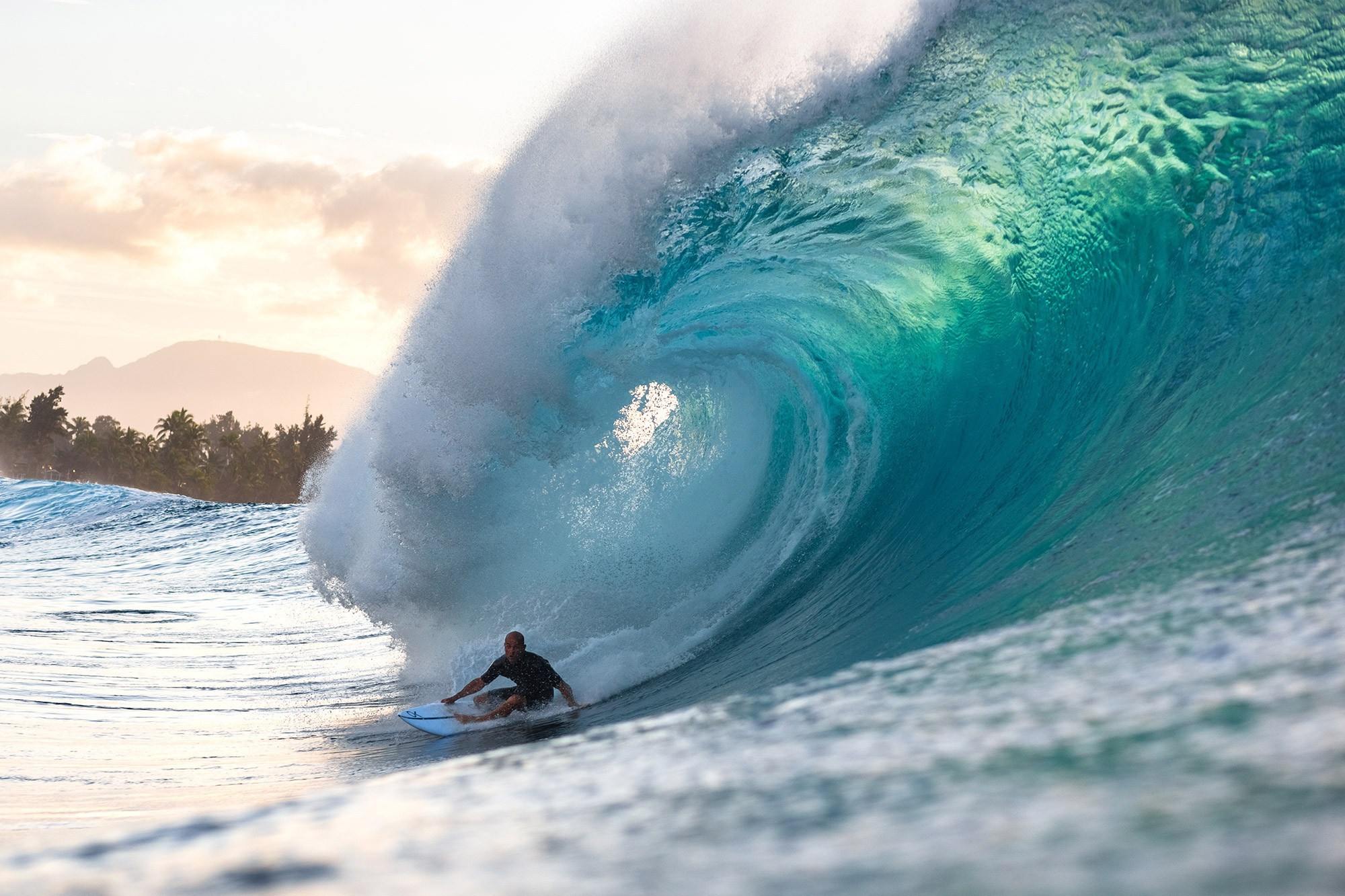 The GOAT, at Pipe last winter.

What piece of advice helped your surfing the most? (From @carne_asada_burrito_4)
My first surf coach when I was 10 years old asked if my eyes were open in the tube. I said no. He said “Open ’em!” It worked like a charm.

What’s your favorite part about being in the movie “Surf’s Up”? (From @jonaburkart5)
Paul McCartney said it was his youngest daughter’s favorite film and he knew who Rob and I were through the characters in the film.

Share a funny memory that causes you to uncontrollably laugh when you think about it? (From @hand.in.glove.138)
I watched Todd Kline and Matt Kechele have a catfish toss with their surfboards back in about 1989 with a dead fish on the beach one day. Matt started it and then when Kliney tossed it back, it stuck through Matt’s trunks into his hip and we couldn’t get it out because catfish have reverse barbs on their spikes. Matt had to go to the hospital to get it cut out and sterilized. He made Kliney pay for it! Haha.