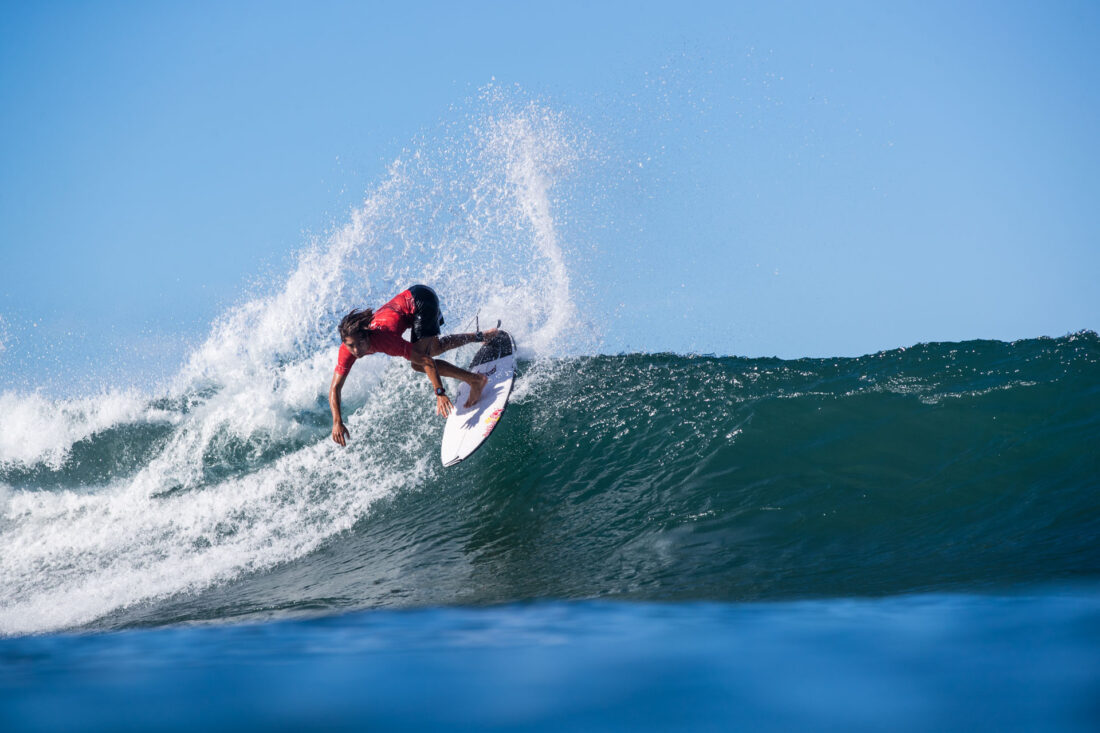 From start to finish, Wong looked unstoppable on her insurmountable forehand as she posted multiple 9-point rides on the way to her second-career QS victory. The North Shore surfer overpowered a formidable Final including former Championship Tour (CT) competitor Coco Ho (HAW), world-renowned surfer Bethany Hamilton (HAW), and emerging star Puamakamae DeSoto (HAW) – starting with a near-perfect 9.25 (out of a possible 10).

Wong all but put the Final out of reach with her excellent 8.10 back up as DeSoto accrued a brilliant 15.35 heat total alongside Ho’s 15.20.

“I’m super stoked and Bowls is super special to me,” said Wong. “My grandpa is born and raised right here, and surfed this wave every day when he was growing up. To win at my grandpa’s favorite wave is the best thing ever.”

Wong’s Semifinal performance also notched her the best single-wave score of the women’s event with a 9.65 Following her dream run through the winter with back-to-back Pipeline victories, Wong now solidifies herself as a dominant threat in Hawaii/Tahiti Nui as she starts the season ranked No. 1 where she left off at the end of the 2021/22’ season.

Spectators witnessed a dominant ending to competition for Hanneman in stacked Final affair featuring event threats Jackson Bunch (HAW), Joshua Moniz (HAW), and Kai Martin (HAW). The Maui competitor took to a massive, full rotation aerial assault to stomping the landing for a near-perfect 9.25 in the opening minutes of the Final. Hanneman then added a 6.00 backup to put his opponents on the ropes early before Bunch, Moniz and Martin began fighting back – Bunch accruing an excellent score alongside Moniz.

But, Hanneman all but shut the door with his backhand attack, combined with another brilliant rotation for a 9.00 to earn the highest heat total of the event and his first-ever QS win.

Hanneman now returns to the Challenger Series for his shot of keeping this momentum alive heading into South Africa and qualification toward the CT.

DeSoto’s recent run of success between the amateur level at Ala Moana Bowls and representing Hawaii at the ISA World Junior Championships gave her all the confidence heading into the QS. The 16-year-old’s forehand was sharp from her first heat until her last to earn a career-best runner-up. DeSoto battled with Wong in both her Semifinal and Final heat, besting former CT veteran Ho in the process as she moves forward ranked No. 2 in the region.

“I had a shocker on finals day in El Salvador (for ISA) so coming into this event I knew I could it if I just showed up and surfed, and was just myself and connect with the ocean,” said DeSoto. “It was just a matter of doing that. Yesterday was so much, got two heat wins and today had two heats with Moana (Jones Wong). She got me in both of them but she was ripping and it’s just so awesome to have the opportunity to be here.”

Eventual runner-up Bunch made his presence known in a big way throughout finals day, accruing multiple excellent scores and near-perfect heat of 18.00 in the Semifinals. This marks a career-best result on the QS for Bunch after overcoming event threats such as Ian Gentil (HAW), Tanner Hendrickson (HAW), Billy Kemper (HAW) and more. Hanneman’s fellow Maui competitor now sits at No. 2 on the regional QS rankings with a strong foothold toward Challenger Series qualification early on.

“It was kind of hard not to just give it everything, the waves were just firing,” said Bunch. “Had a close one in the Quarters and after that I knew I just had to wait on the best waves. There were plenty so it was easy to do that. I just want to do good in a couple contests and give myself a chance at the Challenger Series. That’s my main goal so I’ll give it my best run.”

The next Hawaii/Tahiti Nui event on schedule will be the Sunset Pro QS 1000 beginning October 28 – November 6.