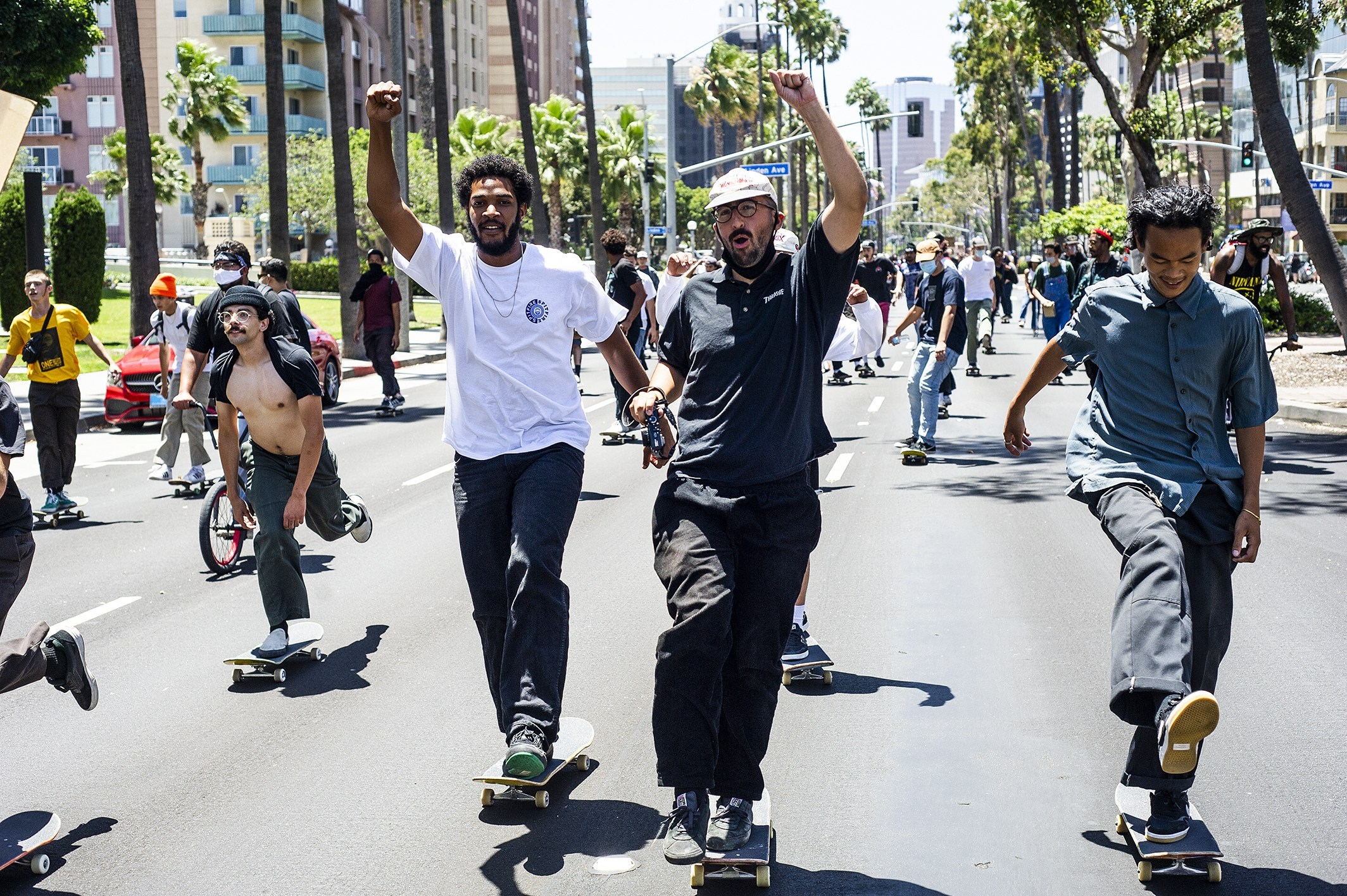 Since the murder of George Floyd and the explosion of protests in support of Black Lives Matter, skateboarders have been pushing in the streets to express their unity with the urgent cause of ending police brutality toward African Americans and systemic racism throughout American life. TransWorld SKATEboarding wants to make one thing perfectly clear: The time for change is now and we stand with Black Lives Matter and every fight for equal justice.

Skateboarding’s modern roots, born in the late 70s, grew in an anti-establishment, punk rock, Fuck You soil. Our middle finger was always up, not just to authority, but to abuse of authority. That’s because skaters back then were misfits and outcasts, every one of us. We stuck together in part because a lot of us had received abuse from people in positions of authority, and we always recognized and protected one of our own.

When street skating took skateboarding out of gated skateparks and private backyards in the late 80s, it was the great equalizer. No matter where you came from, your race, your gender, your financial background — whatever. If we were on skateboards, we were equal. You earned respect through your skills and style, and nothing else mattered. That’s how it’s been since the beginning.

As our friends over at Pushing Boarders wrote, “Saying ‘We’re all just skaters’ might not sound racist, but just being non-racist isn’t good enough. We need to be anti-racist, explicitly and determinedly. We need to work toward defunding and dismantling the structures and systems of racism and oppression.” TransWorld SKATEboarding could not agree more.

We have to be proactive, we have to open our eyes and ears and be more aware if we want to be part of the solution and not the problem. We have to do the one thing skaters can do better than anyone else: We have to push. Push for change.

Systemic racism doesn’t need you to be personally racist for it to be there. That’s what “systemic” means! It’s in the system, it’s everywhere, whether you agree with it or not. The first step toward any recovery is admitting there’s a problem. Once you’ve done that, the healing can begin. Skateboarders are proud of our history of diversity and inclusion, and we should be. We’re often lumped in with other “action sports,” but compared to them, skateboarding has done a better job of elevating different ethnicities. But we know we can do better.

There are simple immediate steps we can take, like support Black owned skateshops and brands. TransWorld SKATEboarding can do our part in promoting and elevating more Black voices, skaters, brands, and organizations than we’ve done in the past. The bigger steps need to be taken within the industry itself, to change what has historically been staffs — particularly leadership staffs — at brands, which do not reflect the same diversity as the packs of kids we all see on our local streets and at our local parks. This can be done. If the last few weeks have proven anything, it’s that our industry agrees on these points.

Skateboarding is a global community that bonds every race, gender, sexual orientation, and socioeconomic status to a single idea: We see the world differently and can imagine potential where others cannot. Our whole deal as skaters is to make the impossible possible; to fight again and again and pick ourselves up until we succeed. 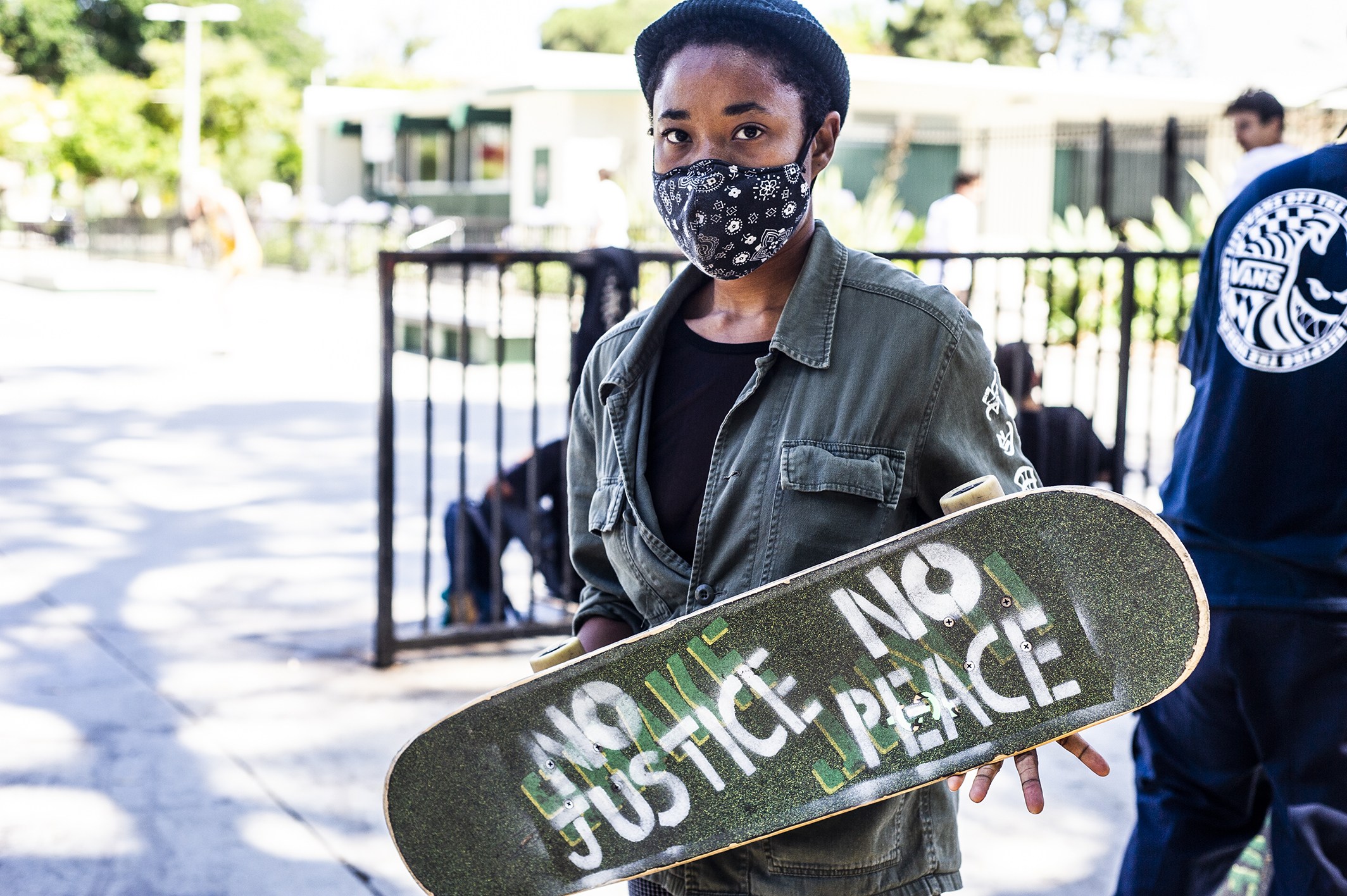 That idea can expand beyond just how we see and travel the streets—it’s something we can all bring to this global effort to dismantle systemic racism. We’re at a tipping point and can really make a difference in the world. Join upcoming protest, get active in your community, sure, but also learn who your local politicians are and hound the shit out them to do something, and for the love of all that is holy, VOTE for the change we need.

Skaters don’t have to sit idly by and watch this moment pass, we can lead the way. Keep pushing.