Holding two world titles and three big wave event victories thanks to her dominance at the Pe’ahi Challenge, Maui local Paige Alms has set the bar for women in giant surf. Fitness training and rigorous gym time are just two factors that set her apart from the rest. Combine that hard work with her positive attitude and service to her community, and it’s no wonder why girls everywhere are looking up to Paige for mentorship. She undoubtedly would excel at any sport she set her eyes on with Olympic caliber due to her self-motivated determination; surfing just happened to win her heart. And for that, the beautiful island of Maui celebrates breeding all-star athletes like herself. Her tall stature at nearly 6-feet tall doesn’t hurt either for some last minute strokes right when it counts. Good luck winning a paddle-battle against this strong swimmer. 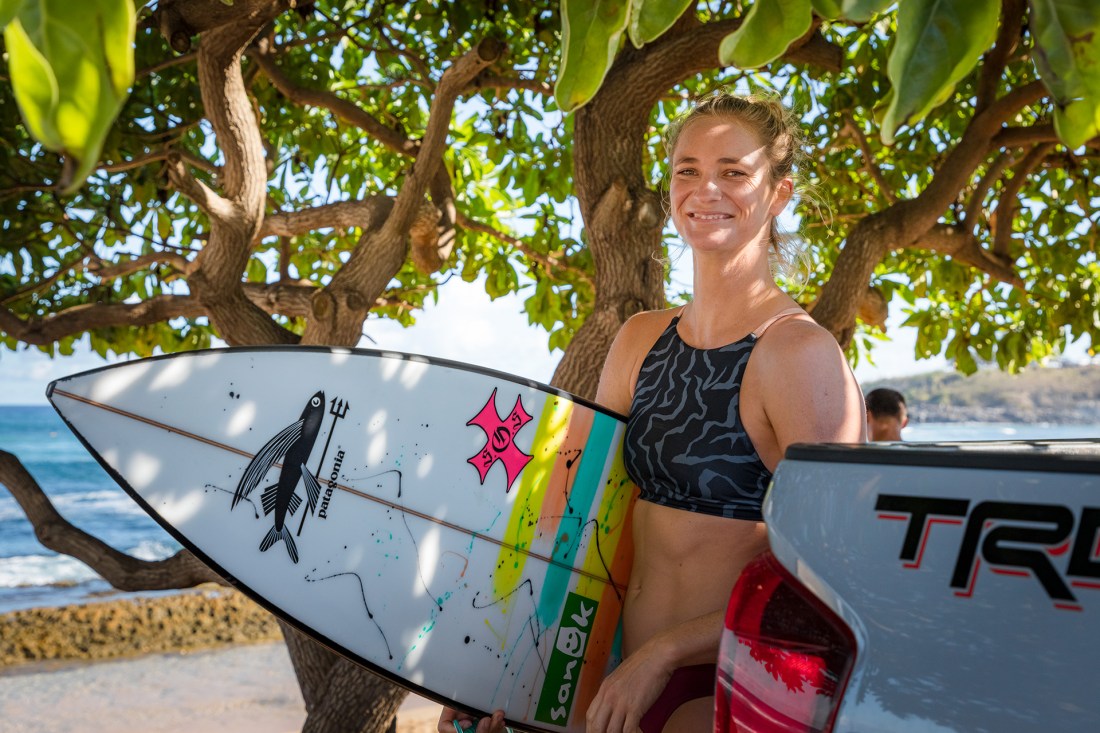 Paige Alms’ domination in the Jaws arena earned her an ESPY nomination for Best Female Action Sports Athlete – and this journalist wouldn’t mind seeing her nominated in the general Top Athlete category. Aside from the resume of accolades, Alms uses her platform to highlight environmental efforts by promoting eco-conscious brands such as Patagonia and Sanuk. She even created the #trashyselfie campaign against single-use plastics “encouraging environmental consciousness and sharing small-everyday-actions that help male the Earth a little cleaner and healthier one selfie at a time.”

She isn’t scared to share her honest opinion (which may be my favorite thing about her) and actively participates in countless interviews about women’s empowerment and the need for equal pay in surfing. The New York Times caught on, sharing the story of surfing’s female movement with the world at large ushering a domino effect in mainstream media. As we welcome in 2020, the next generation of female wave riders will be greeted with equal prize purses and more opportunities to achieve their dreams, following in her foot-steps as professional athletes. Columnist Ryan Holiday said it best: “the person who clears the path ultimately controls its direction, just as the canvas shapes the painting.”

For our latest installment of “Surviving Giants”, we caught up with the champ for some insight into her training routine, how to survive a two-wave hold down, and why she’s excited to watch the younger girls enter the lineup and shake things up a bit. 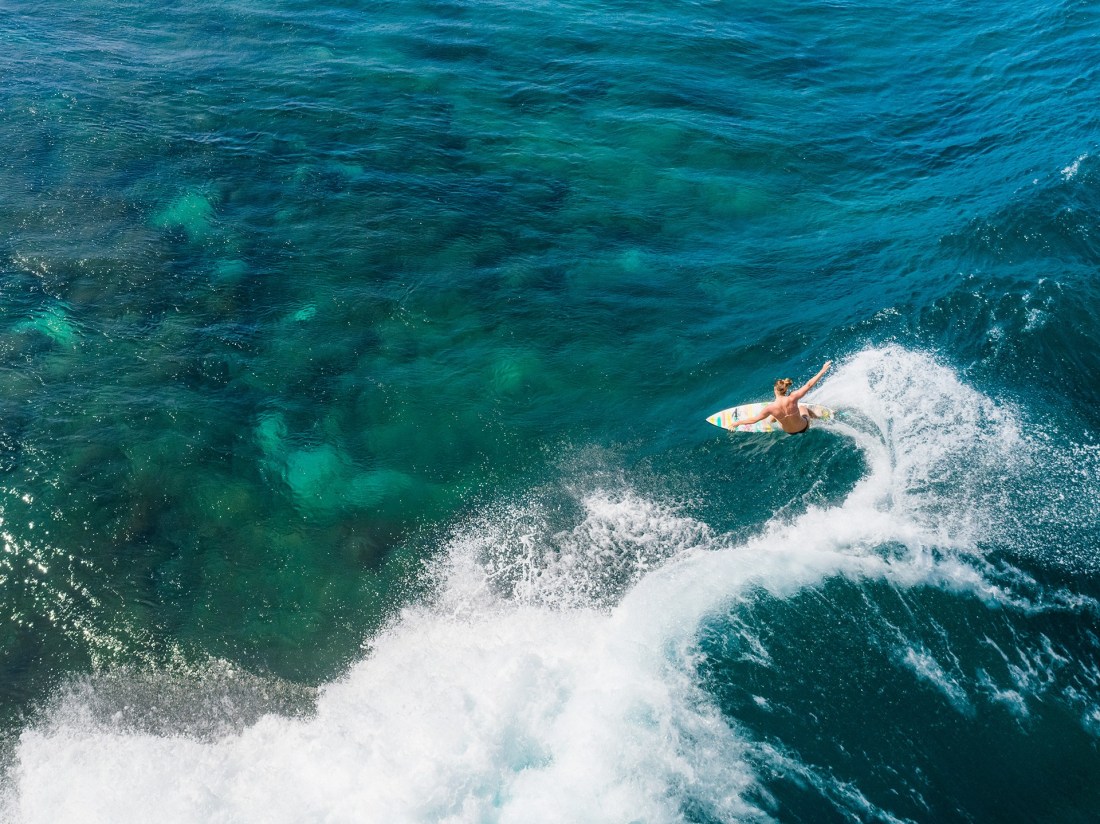 Morning routine:
It depends on where I am and what the waves are doing… but on a good day at home. I’m usually up with a coffee, sitting on my deck in the sun with my man and our dog, and getting ready to head down to the beach for a surf, followed by some yummy grinds.

What makes Jaws the “Superbowl of Surfing”?
The wave itself is just pure magic for spectators and when viewed from up on the cliff it’s like being in a stadium watching perfect, giant waves.

How do you survive a long hold-down?
Training and preparation: knowing what your body is capable of helps to give you the confidence and calmness when being held down for a very long time, or during an extremely violent short hold down—sometimes those are worse.

Training techniques and tips:
Depending on the time of year, I’m training out of the water for a couple hours a day, at least five days a week. Whether that be doing strength and conditioning, stability and balance work, breath-hold training, cardio, or just simple stretching and mobility, it varies depending on what the surf is doing and how my body is feeling. I feel very fortunate to have an amazing team and the crew at Deep Relief Peak Performance who keep me in the best shape possible, and also help put my body back together after injury. 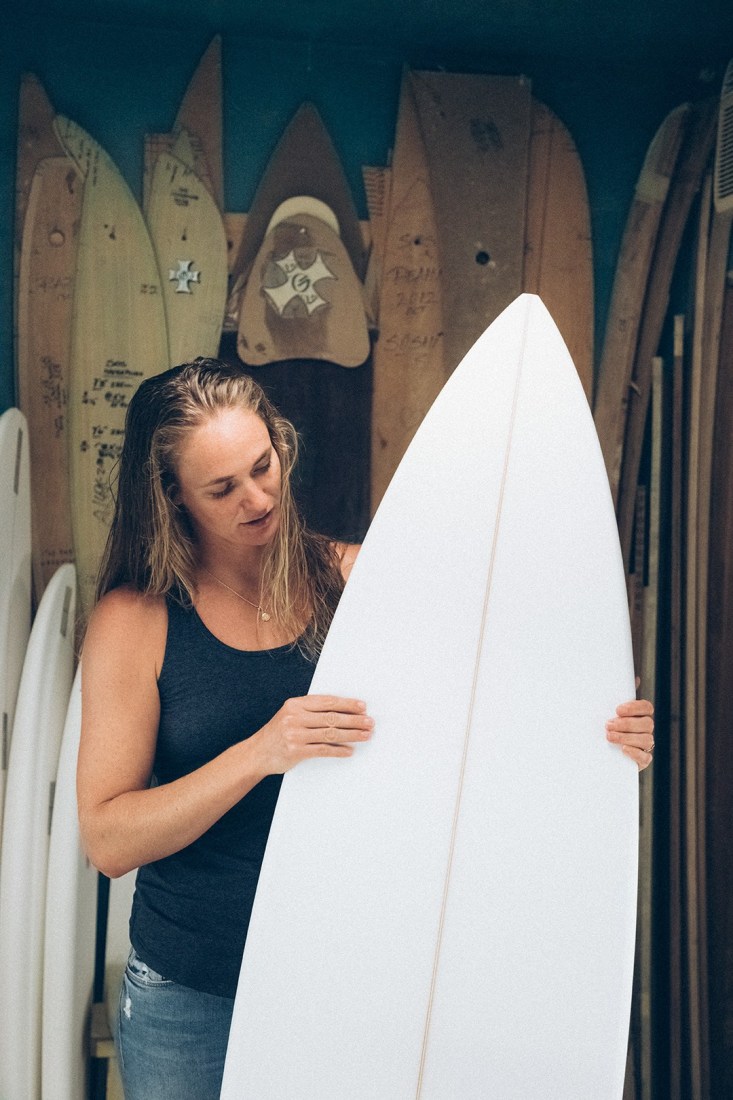 How has water safety, like inflation vests and jet skis, progressed the sport?
I think people are pushing it way harder than before, taking off on waves that they may not have years ago. It has allowed the best surfers in the world to truly push themselves to the limit. Having floatation, safety equipment, jet skis, and proper training techniques has helped save countless lives.

What does the future hold for female big wave chargers?
The sky is the limit and it is there for the taking! The new crop of female chargers coming up now will for sure be better than all of us. I’m pretty excited about the future for all of the women. There are so many waves for them to ride, literally and figuratively.