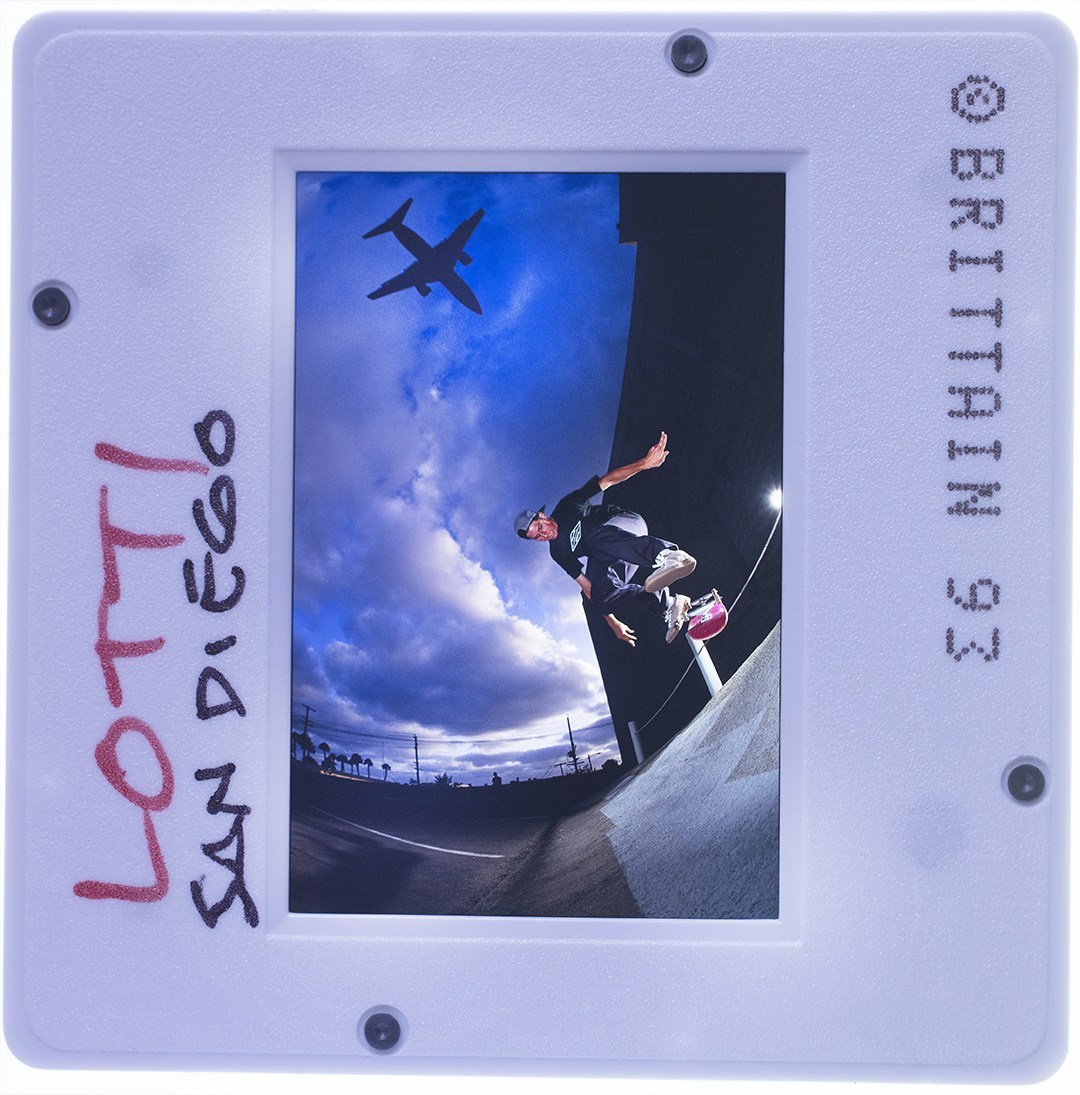 This article started over breakfast with Matt Price, and somehow we got on the subject of airplanes in photos, as he had captured one nicely while shooting Erick Winkowski a couple years ago. We started naming off some iconic photos in that category, and I claimed it must have stemmed from Grant’s epic photo of Brian Lotti from back in the day. A bit later, I figured this conversation could be turned into a somewhat interesting read on our website so I set about hitting up these talented photogs for their images and words. They all obliged very quickly, and to my surprise when I opened Grant Brittain’s Wetransfer, he had sent a second image, shot in 1986! Wow. Imagine trying to get one of these gems on film, and not knowing if you got it until you got your slides back from the lab. Also, it’s not lost on me that I can text my favorite photographers and have them hit me back with photos for an article immediately. I’ll forever be humbled with this kind of privilege and access to these guys’ archives that have, in many ways, shaped the way I look at the world. Thanks to all these photogs, but especially Grant for starting it all.

San Diego’s Lindbergh Field is situated right next to its downtown area. If you’ve ever flown into San Diego, you know how spectacular the landing is, maybe even a bit sketchy. It’s also spectacular when you’re a pedestrian on the ground when massive jets are roaring in just over the rooftops. This cement bank was next to a furniture store and lay directly beneath the flight path, and Brian Lotti hit me up to shoot him skating there. His idea was to coordinate him in mid-trick with the jetliner above him. We shot a few jets and a few frames and hoped we timed it right, when the film came back, we knew we had succeeded.—Grant Brittain 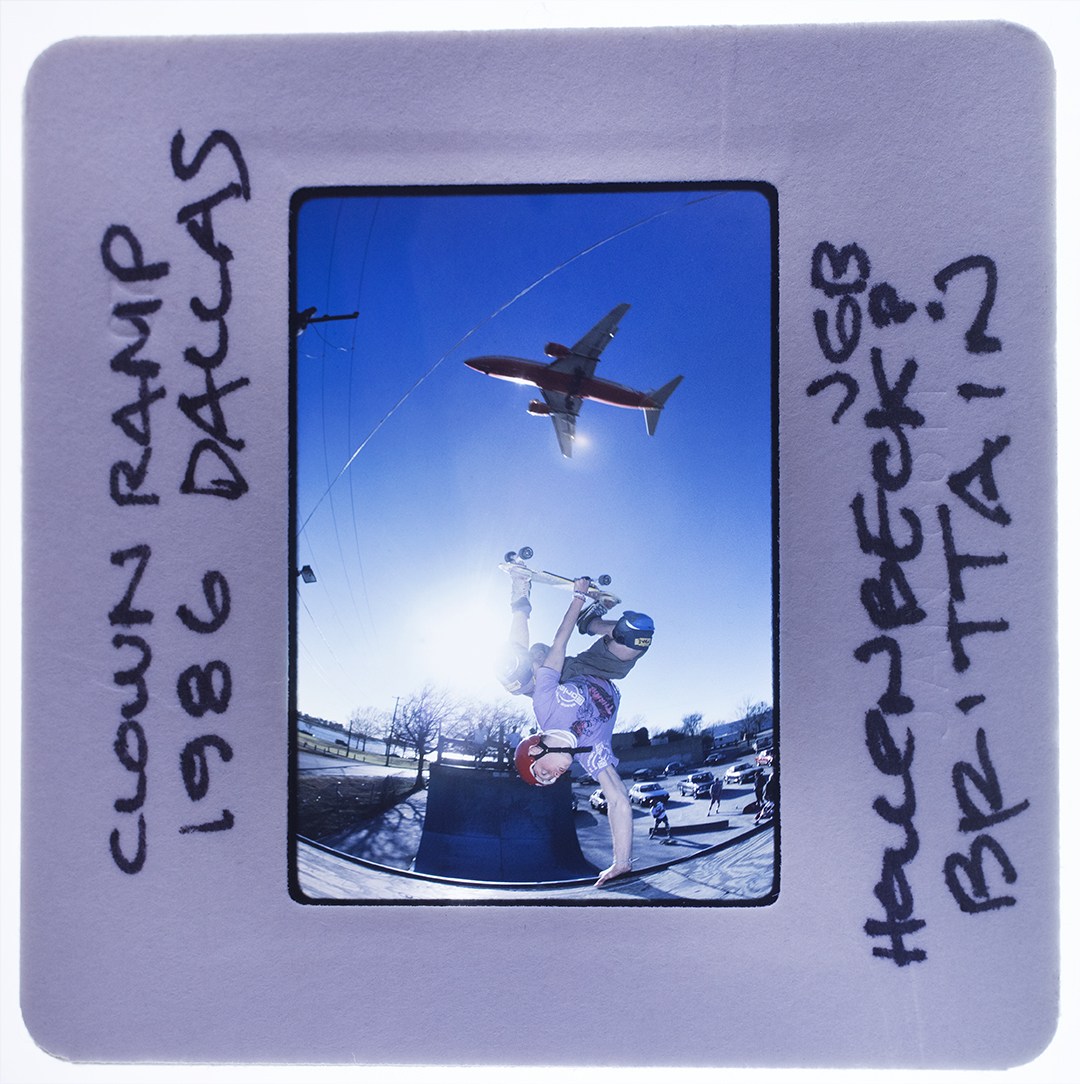 In 1986, I shot the Blue Ramp and before that, the Clown Ramp. They both once sat on the north shore of Bachman Lake and were directly across from Dallas’ Love Field on the south shore. While skaters sessioned the ramp daily, airliners would pass low overhead and any skate photographer worth their salt had to get at least one good shot with skater and aircraft in the same frame. This invert is of Texan Danny Hollenbeck was caught at the right moment proving we’re both worth our salt.—Grant Brittain 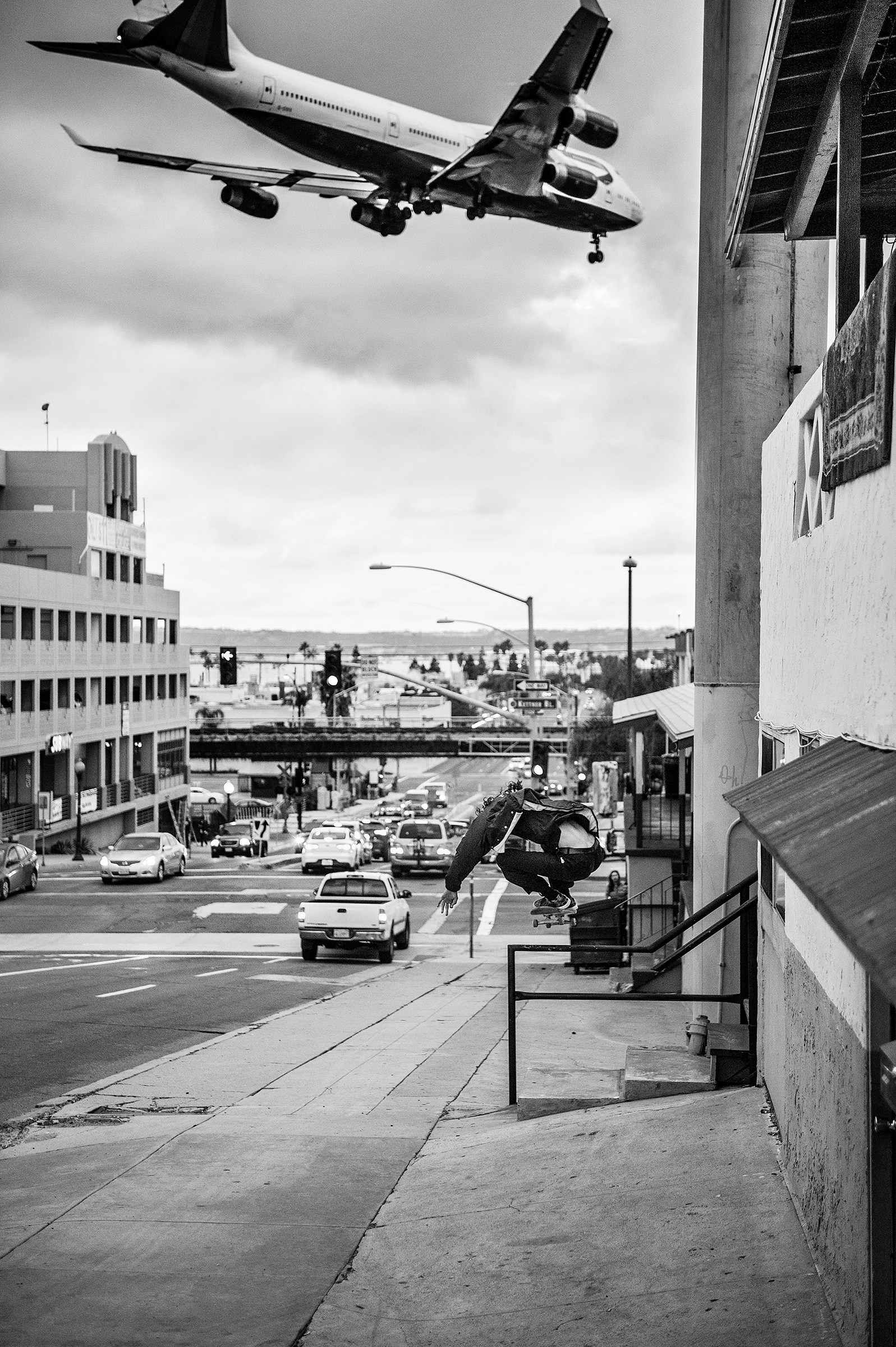 Evan, Wes, and myself were skating around San Diego a few years ago. We stopped at Chrome Digital because I had to pick something up, then ended up skating around the block. It was purely random as many good skate photos are. It was towards the end of the day when Evan spotted this. The SD airport is very close, and the flight path is directly above. He had Ollied it a few times when we looked at one another both knowing it would be dope if we could possibly time it. We came close a few times, then this one came in. We could hear it for a minute – Evan hopped over the bar, then realized we had pulled it off with the biggest plane of the day. Hyped I managed to keep the horizon line straight. I was using an 80-200 f2.8 which was fine with all the other flights, but this one was cropped a bit which I actually like. Thanks to Evan for reading my mind as there’s something magical about a skate photo with anything unique going on in the background, especially a 747!—Mike Blabac 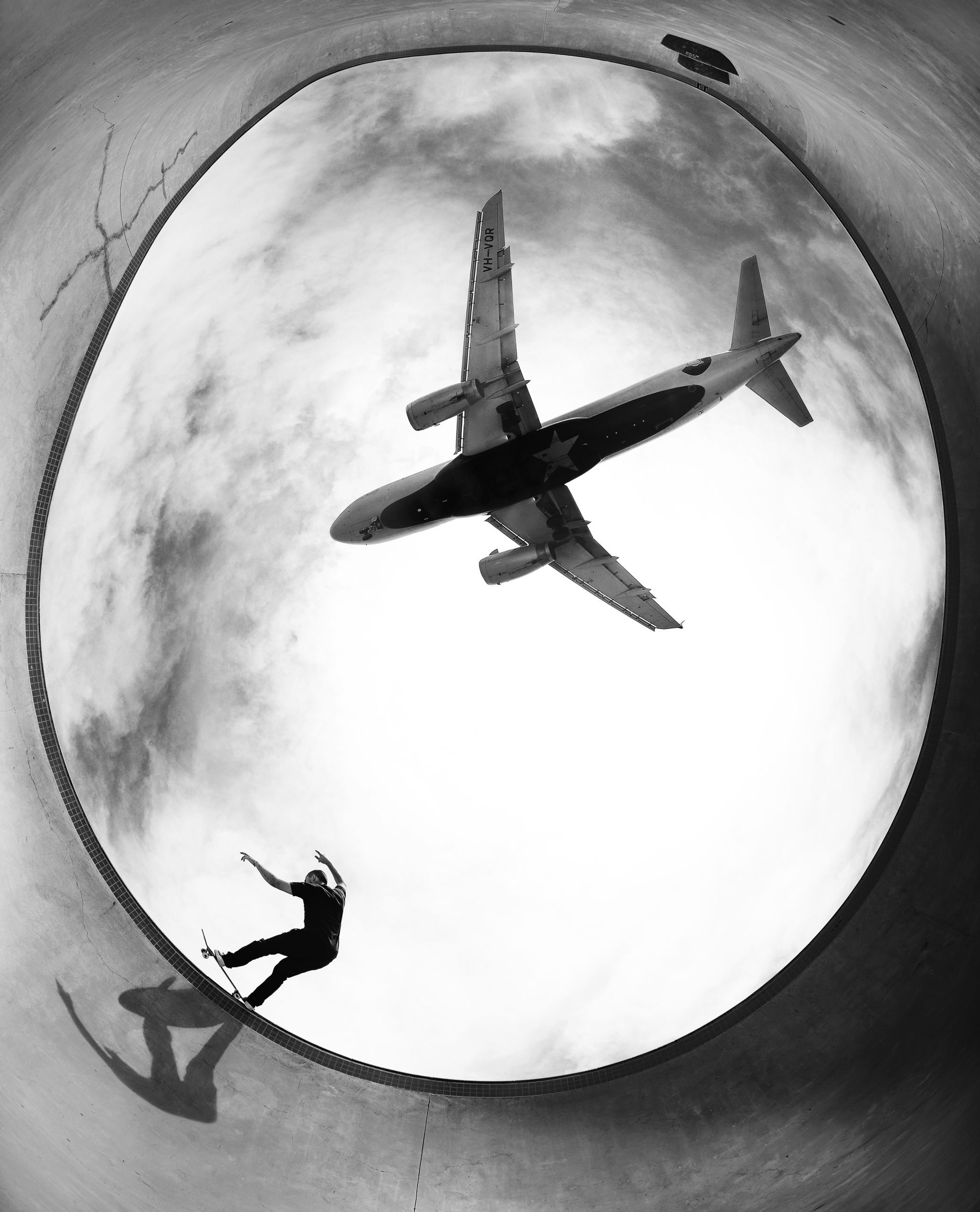 This was a photo that I’ve had my mind set on shooting for the last few years. I planned on shooting it back in 2017 on a DC trip but the day we got here to do it the weather completely turned on us and rained us out. I would have tried sooner but the only problem is that it’s on the other side of the world [laughs]. The stars aligned a couple of months ago when we were traveling through the town in Australia where this bowl is. The bowl is literally a couple hundred meters away from the tarmac. Marius and I started timing how long it took before planes arrived. Marius would stand there waiting until we could see the plane slowly approaching and he would go for it. It took a long time to get it precise, but I’m hyped on how it worked out.—Jake Darwen 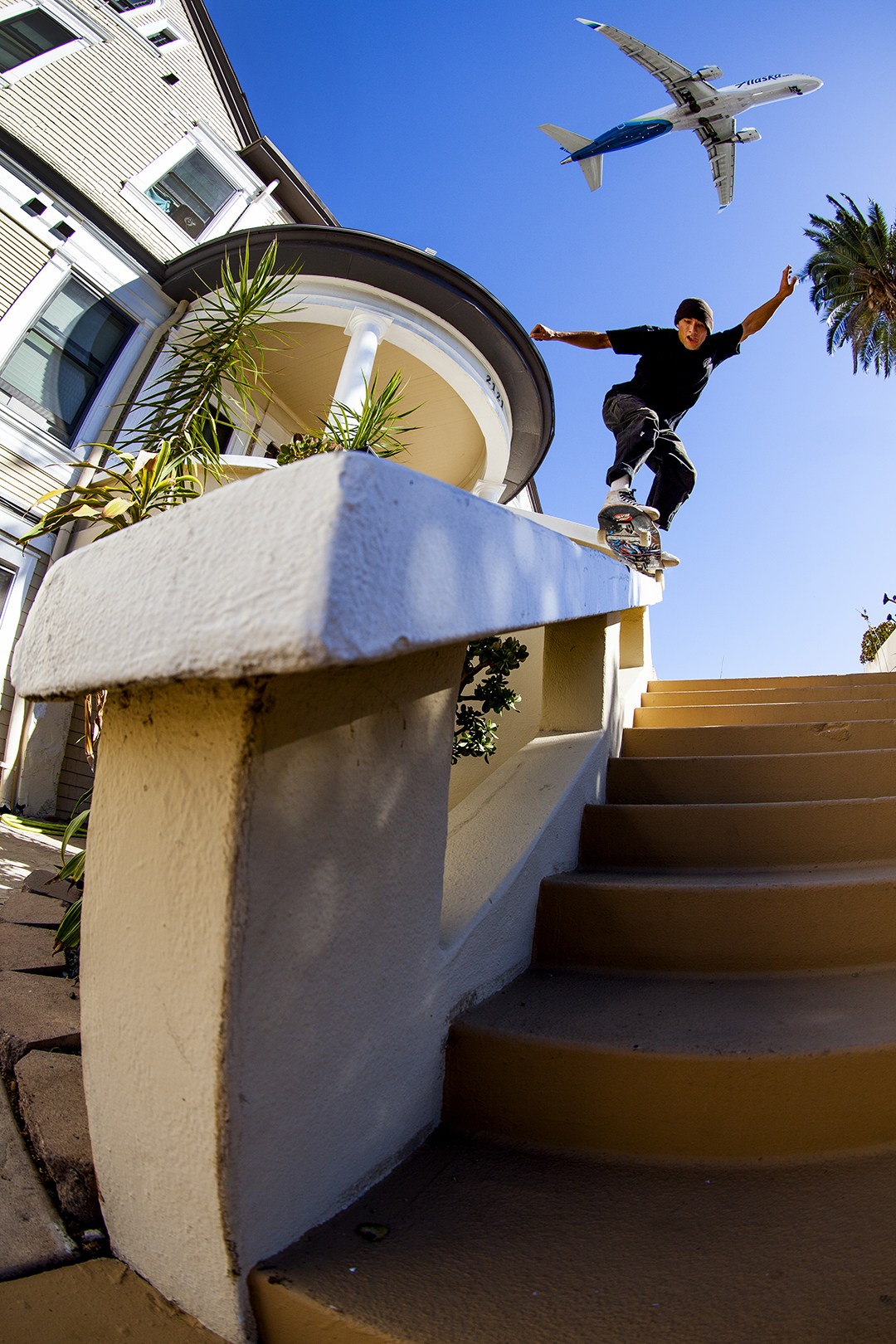 When Winkowski took me to this spot, I didn’t realize how close it was to the airport and I had no idea it was even in a flight path of any kind. The spot is a super bust and we only got like four tries or something like that and on the last try, right as he pops, I hear the loudest airplane noise ever and it felt like the plane was gonna hit us. I got scared so I accidentally snapped two frames, but didn’t know it. I looked at the first one and it was early and the plane was half cut off and I instantly thought, “Man! It was so close!” Then I scrolled over and saw this perfectly composed and timed photo that was a complete accident. I really believe every decent photo I have ever shot was a lucky accident.—Matt Price