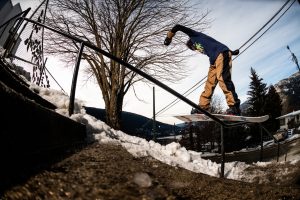 Forest Bailey is not so quietly destroying the game, as his clips from last season could be seen peppered around various projects including Torment Promotional video and SNOWBOARDER Mag’s Everybody, Everybody. AS Forest and his filmer/Editor Brendon Hupp release a re-cut of Forest’s clips from last season, We also discuss their plans for the coming year’s project. READ ON TO KNOW MORE!!

His art is symmetrical, and his grinds are squared up. As seen in Cold Front Vol. 33.3. Tim ZImmerman Photo.

Let’s start talking about Stop talking, where does the name come from?

It’s a couple things. One is a reminder; stop talking, stop interrupting and just listen. Listen to friends, listen to the planet, listen to yourself.

Secondly is how silly I find snowboard videos where people are narrating the entire thing like it’s a documentary. It seems to be a trend right now and in certain videos it makes sense, but for me I mostly want to see the action.

I noticed you spending some time with Gus Engle in Canada. Did he snowboard in the project?

Gus and Este were sweet enough to let Hupp, Niels, and me crash at their house a bunch this winter. It was some of the sweetest times. Making dinner, making dessert, listening to them practice music. It’s such a treat on a snowboard trip to stay at a real “HOME” rather than a rental or a hotel. It felt so wholesome, and yes Gus got some clips when he wasn’t busy being a rockstar and putting out their new album which ya’ll should check out.

Who can we expect to see as far as cameos in this project?

As you all know it was a strange winter. But we were lucky enough to meet up with lots of buddies while it lasted. Don’t want to give it all away but Niels, Max Warbs, Mccarthy, A lo, Temp and plenty more.

You put out one of the last really good web series we have seen in Snowboarding with FSBS. Has it been hard to hold on to the footage and not release it?

I’ve honestly been really excited to work on a new project and hold on to footage. Fsbs was so fun and was some of the best times of my life. I’m excited to work a little longer on this project and really make it the best that I can. I have always been a firm believer that if you have a vision the best way to make it come to life is to take matters into your own hands and just make it. I am fortunate enough to be supported by brands who trust me to do so. 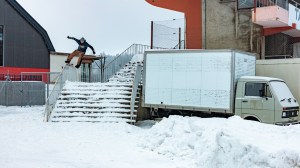 Much of the footage above is street footy, will we see powder riding in this new project?

Yes, I have been really trying to make it a point to get back into filming in the mountains again. The last few years I have felt quite disconnected from it and that makes me sad. It’s such a different mindset than street snowboarding, But i love it all the same. I was hoping this spring to go full in, but obviously things changed. I am excited to spend more time in the mountains in my future.

Would you consider Canada to be the mecca for street spots the last few winters?

I think so but I think mostly because it’s so consistent. As the world warms lower elevations and cities seem to be getting less snow. But Canada is always holding. Also I love poutine.

How hands-on are you with the editing and direction?

About as hands on as I can be, Hupp and I are always searching for music and working through editing together. At some points I also like to let him do his thing, he’s a pro. Luckily we have similar taste so it works out great. Direction wise we work together on everything and I’m trying to include more personal touch by making animations to live in the vid.

Thoughts on a release time?

No one knows. We had a great winter. It was seriously cut short because of the state of the world but we are still hoping to do more. Maybe it will come out next winter. Or maybe we will just keep filming for something that comes out later. That’s the beauty of having creative control. It will come out when we feel it is ready. “Quiet is coming soon.”

Filming for the season – is it over?

One filming season ends and another begins, it’s never going to be over.

Much love to all. Stay safe and stay smart. Can’t wait until we can all return to doing the things we love with the people we love.