Rise Above / The Shion Crawford Interview 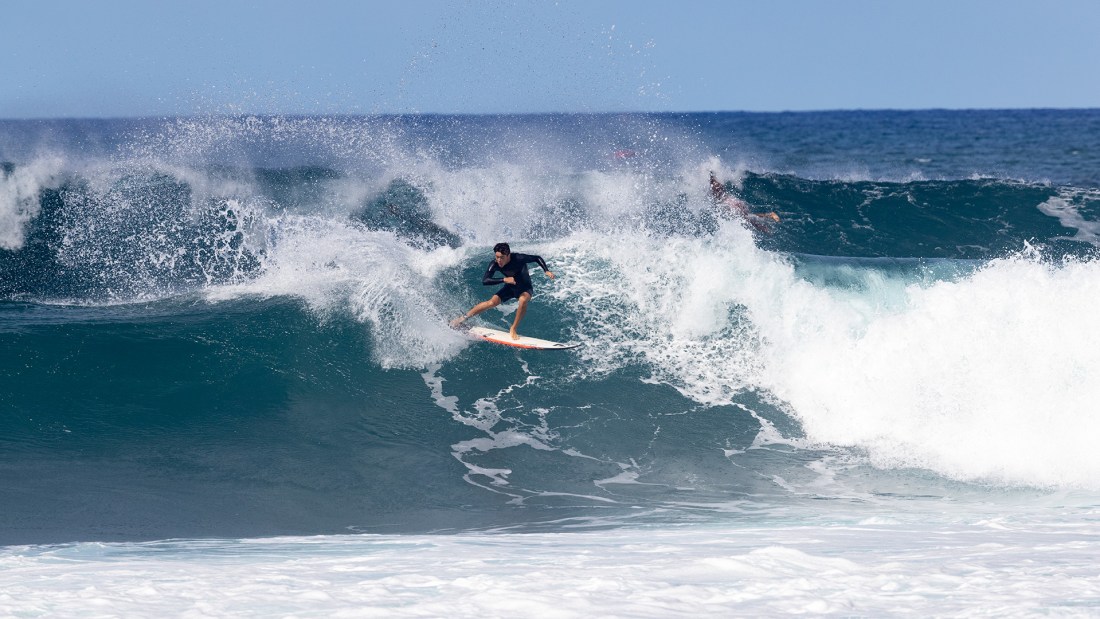 They say youth is wasted on the young. But, when you’re built and surf like a grown man, have the free time of a teenager to chase waves all day, and call the North Shore your home, I’d say you’re doing just fine. Fifteen year old Shion Crawford has wasted no time in proving himself to be one of the main standouts in a very deep North Shore grom talent pool. His patented frontside hooks, have been fine tuned on the powerful bowly rights of his homebreak of Hale’iwa. Despite his manly stature, Crawford remains as springy and agile as any top grom, as you can see him zipping and flying through the rest of North Shore, that’s when he’s not ripping it up at Ali’i’s.

How did you gravitate to surfing?
Before I was surfing, I was boogie boarding and sand sliding at Hale’iwa and trying to stand up on the boogie board. After that, I feel like surfing was like the next step. So, I gradually went forward and then started surfing.

You’re a pretty tall kid for age 15, do you think your size is an advantage? You have to still be nimble, but you’re pretty fast and powerful. I think it’s a combination that works well for you.
I feel as a bigger kid, I have to take advantage of my size. I’m trying to do bigger turns and throw bigger sprays. But, I have to try to be fast too. I can’t just be big and slow. So, it’s important to balance each other out.

Well, for you what’s harder. Big waves are small waves?
I feel like surfing bigger waves is harder. The timing of your moves. And you have to draw out your turns. It’s not going to be those small check-turns, like you do in knee-high waves. If it’s double over your head and you have to draw out those lines and you really have to time them right. That’s the biggest challenge.

What’s unique about surfing is that you can never really know what’s going to happen or know exactly what you want to do on each wave?
You can hardly predict waves. You can kinda guess, “Oh, I might have a little air section on this one,” but then you take off on the wave and it’s not really there. Or, it looks like it’s gonna barrel and then you try pulling in and it just clamps. You really don’t really know what a wave is gonna give you until you actually ride that wave.

Is style important?
I think style is really important in surfing. Especially in your rail game. I like Taro Watanabe’s style. It’s super clean, and just stylish, haha!
You just got on the O’Neill team this year, do you feel like you’re part of a new family? How does it feel to be with them?
O’Neill, I feel really great with them. I feel like I’m in the family. The wetsuits are so good, really comfortable, and super stretchy. I’m super stoked.

What pros inspire you?
Probably John John. I saw his wave at Hale’iwa, the big crazy one he submitted to the Triple Crown. He did that huge carve into the barrel. I’ve never seen anybody do that at Hale’iwa, The way he did that so perfectly it drives me to be like him. Because, I want to surf Hale’iwa like that too. And probably my second is Griffin Colapinto, his style and how good he’s been surfing in the barrel this year. It was super sick.
It was pretty mind blowing all the incredible waves at Backdoor and Off the Wall this season, so many guys got crazy waves.