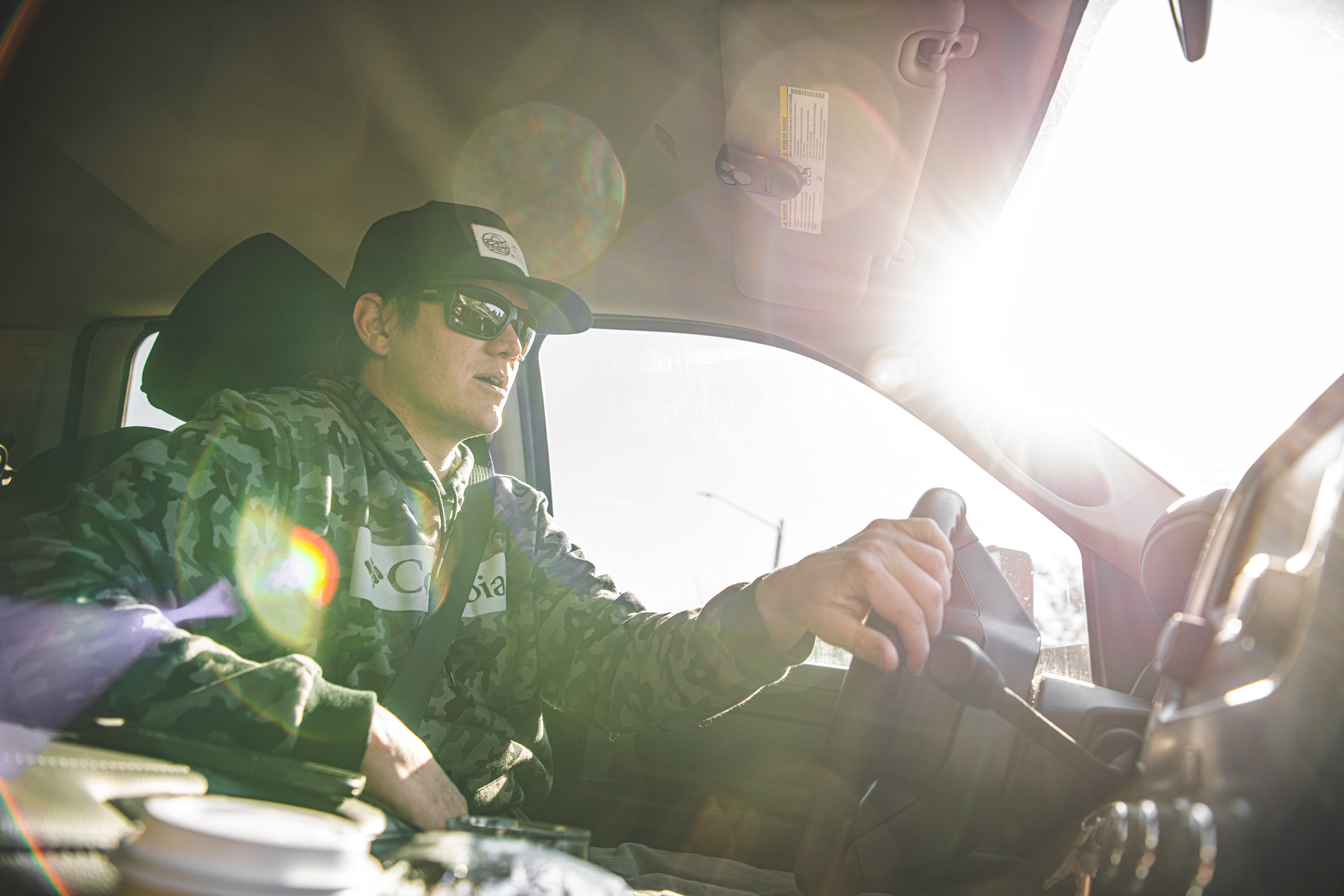 Curtis Ciszek has secured his spot as a backcountry statesman on the back of countless awe-inspiring clips over nearly two decades of jaw-dropping video parts. Curtis was a big name in snowboarding well before the smartphone, and continues to redefine what a pro’s job description looks like as we enter our 13th edition of iPhone. Technology aside, Curtis spends his time outdoors connecting to the most nuanced parts of his surroundings. From checking surface hoar and the layers of snow that make up a safe snow pack, to having a first hand look at the diminishing fish-count in the Deschutes, Curtis’ whole world is centered around the beautiful world around him. About a year ago, SNOWBOARDER caught up with Curtis to discuss his newest opportunity to be a part of Columbia Sportswear’s team, who is doubling down on the winter action sports space and bringing new tech to the slopes. As Curtis continues to work on a personal project that holds great sentimental value, he not only navigates difficult terrain on his board, but difficult terrain in a post-covid outdoor industry. From talking about his triumphs in Alaska, to the worrisome nature of the fish count in Oregon, we catch up with Curtis to see just how he stays afloat.

Last time we spoke it was just before winter and you were in the midst of filming a project. Obviously Covid got in the way of a lot of people’s plans. Were you able to get back out there and film?

Well, Canada was closed until beginning of August so I still haven’t been up there. So I wasn’t able to sail and get back on the boat, but what did we do? We flew up to Haines with Austin Smith and Blair Habenicht and we got two really good days in Haines. We’re going to blend that footage into the sailboat project.

Any sort of exciting advancements with the movie? What stage are you at with it?

Right now, I’m working with Jake Price and Sam Heltner. Sam is a legend, he used to be a Nike filmer and filmed for People forever ago. We are working on laying it all out right now.

Is that a hands-off process for you or are you over the shoulder about it?

I’m pretty hands-off. Jake is taking the ball and running down the field, as they say. That guy is a movie maker. Basically we’re laying out a big rough and we’re all going to sit down and have a meeting about which direction we’re going to take the whole thing.

Did you feel pressure in AK to get shots more than usual, considering it was so much harder to make a trip happen during Covid?

Yes and no.  We really had a short window. We flew out, got in in the morning, got the cameras out for about a day and half and then weather came back in. we left, thinking that another good weather cycle would likely come through. A day or two after we left, Iikka Backstrom, Blake Paul and Bryan Fox hit me up asking how it was, and I essentially said ‘It was insane, you gotta go.’ They went up there and it went full meltdown. I’m talking 40-degree temperatures all the way to the top. Those guys got completely skunked, and our hopes of getting back were melting away just like the mountain was.  We felt lucky to get the days that we got and I wouldn’t say that we went up and filmed anything groundbreaking, but we had Blair with us. We got some good stuff.

I feel like having Blair Habenicht as a travel partner must be one of the more interesting people to ride with in that kind of situation.

Oh yeah. It’s just great to have someone who has spent that much time up there. It’s an adjustment period for sure when you get dropped off the first time. You’re like okay, this is three times bigger than anything I’ve ridden all winter. And Blair is just immediately comfortable. He’s very motivating.

Staying comfortable in high stakes situations is definitely the name of the game. What outerwear pieces are essential to your backcountry set up?

I wear the Peak Pursuit jacket and pants. Just a lightweight, breathable, waterproof shell. Then layered correctly under that.

In a situation like AK, what are your layering options?

It’s a men’s Labyrinth Loop Omni-Heat Infinity Hooded Jacket. Down insulated puffy jacket if it’s really cold. And then yeah, just like, I usually wear two layers of base layer underneath my pants.

So obviously in Alaska you can choose to stay on the ground, or you can opt for airtime. What are your thoughts on airtime versus extreme terrain these days?

I still think airtime is key. I try to keep going into the air as much as I can. You don’t want to be labeled as just the turn guy. I’m down for both sides obviously, but I still try to get into the air

If you had to identify some of the riders that are making you feel like you got to stay in the air, who are you watching out for?

Pat Moore. He’s older than I am and he’s still chucking carcass.

In the name of staying up on current trends, I must ask, did you check out your local crate challenge in Bend or are you staying away from that trend?

No, Jared Elston hit me up and said it’s going down, and I said I’ll watch the Instagram Live. My hip couldn’t take one of those top-to-bottoms. Are you kidding me?

Do you think that your backcountry experience might help you hike up those things?

Hahaha. That’s funny. No, it helps me stay away from that challenge.

If I’m not mistaken, you had just been starting the flyfishing outfit when we spoke.

Yeah, that’s been a fun process this year. Before you called, I was watching a Zoom meeting between Oregon, Idaho, and Washington about how bad the fish returns are and if they’re going to close the whole Columbia Basin down.

Yikes! Wait what does that entail?

So mainly I guide summer steelhead trips. Steelhead, like salmon, are fish that run out to the ocean and then comes back into the rivers. Something is happening in the ocean where the fish aren’t making it back. There are still a few, the river is still open. People are still guiding for them, but I ended up cancelling my season.  I’m lucky to be able to do that thanks to snowboarding, but all my buddies are still out there working every day grinding trying to catch them, and there’s very few in the river. It’s pretty sad.

Well they’re all meeting to figure out what the management is going to do moving forward, so we’re just kind of curious if they’re going to close certain rivers, certain sections, or what they’re doing to try and structure the rehabilitation of the fish.

Do you find that you, as a rider, need to have an identity that is more than just a snowboarder in this day and age?

No, I don’t think so, but it just depends. I mean for someone say like me who is not going to get into the air that much anymore maybe. I have a full summer job, man. But for someone like Sage Kotsenburg who is at the top and is going completely crazy right now, absolutely not. That’s still a thing. I would say this day and age it’s harder to just be the snowboarder’s snowboarder than say what it was in like 2008, 2009, but people successfully do it.

Curtis, It’s always a pleasure chatting with you. I look forward to checking out your movie!