Steve Boehne, founder of Infinity Surf, started shaping surfboards at age 12 with his dad. He became quickly adept and sold them throughout his high school career. Those original boards were branded, “Boards by Steve”. Fast forward to the 1970’s when he and wife Barrie are on the competitive tandem surfing circuit. They competed around the world and on the Wide World of Sports.  Remember that?

Then, around ’74, everyone got swept up in the skateboard scene in California. By then, Infinity Surf had been launched (1970) and Steve Boehne decided to make one of the first tandem skateboards. The video here depicts him & a very trusting Barrie, having some fun and sliding down the hill in typical 70’s skate style showcasing the talent these two had on the waves and with each other. The video is priceless. Watch it again and again. 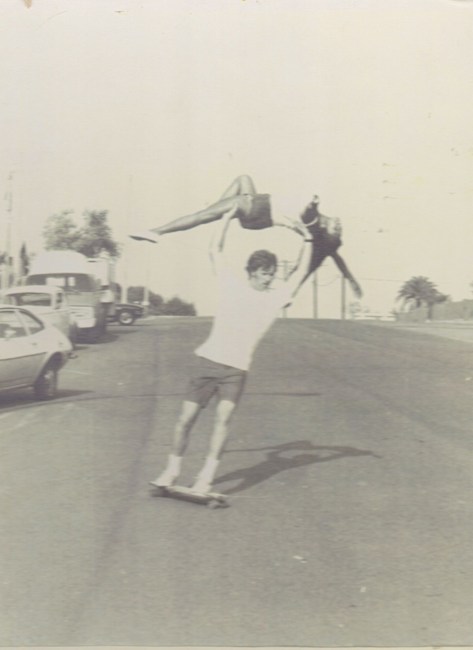 Steve lifts Barrie in a display of talent, balance and skill from the 1970’s on a skateboard of his own making.

Then, twenty or so years later, Steve & Barrie’s niece finds the video and launches it on YouTube. This happened around the time the Dana Point City Council was assessing their community to decide who to honor with the next Linear Park tribute statue for local pioneers within the surf industry.

Steve and Barrie’s long time commitment to their community, their dedication to the world of watersports, their surf shop & business, their creativity and athleticism led to the town board awarding this STILL dynamic duo the honor of joining Bruce Brown, Hobie Alter and Phil Edwards with a commemorative statue of the two of them from their tandem surfing days.

Moment by moment, we create our legacy. Steve Boehne says the key to his success is:  “Persistence. I really like working and making surfboards.” 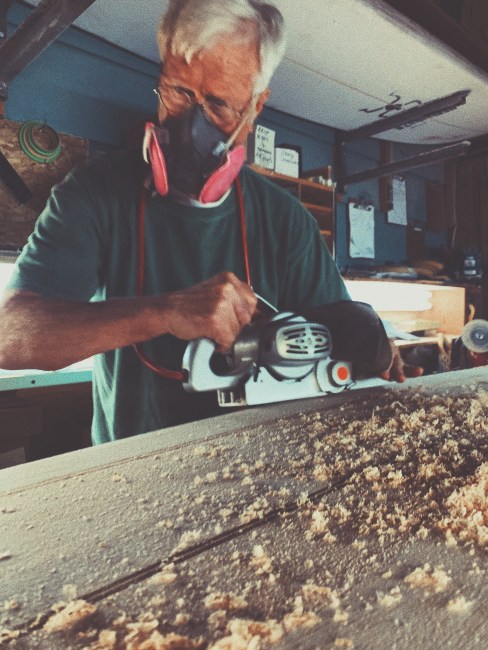 Still at it: Steve Boehne in the shaping room at Infinity Surf crafting his next stick from a balsa wood blank. It’s all a blank until it’s in the hands of an artist & master shaper like Steve. Photo: Dave Boehne

Steve & Barrie Boehne of Infinity Surf, we salute you!

Stay tuned for the FULL WRITE UP of this impressive clan and 50 Years of Shred history in the upcoming SUMMER ISSUE of Standup Journal.  We can’t wait to share it with you.  Aloha.